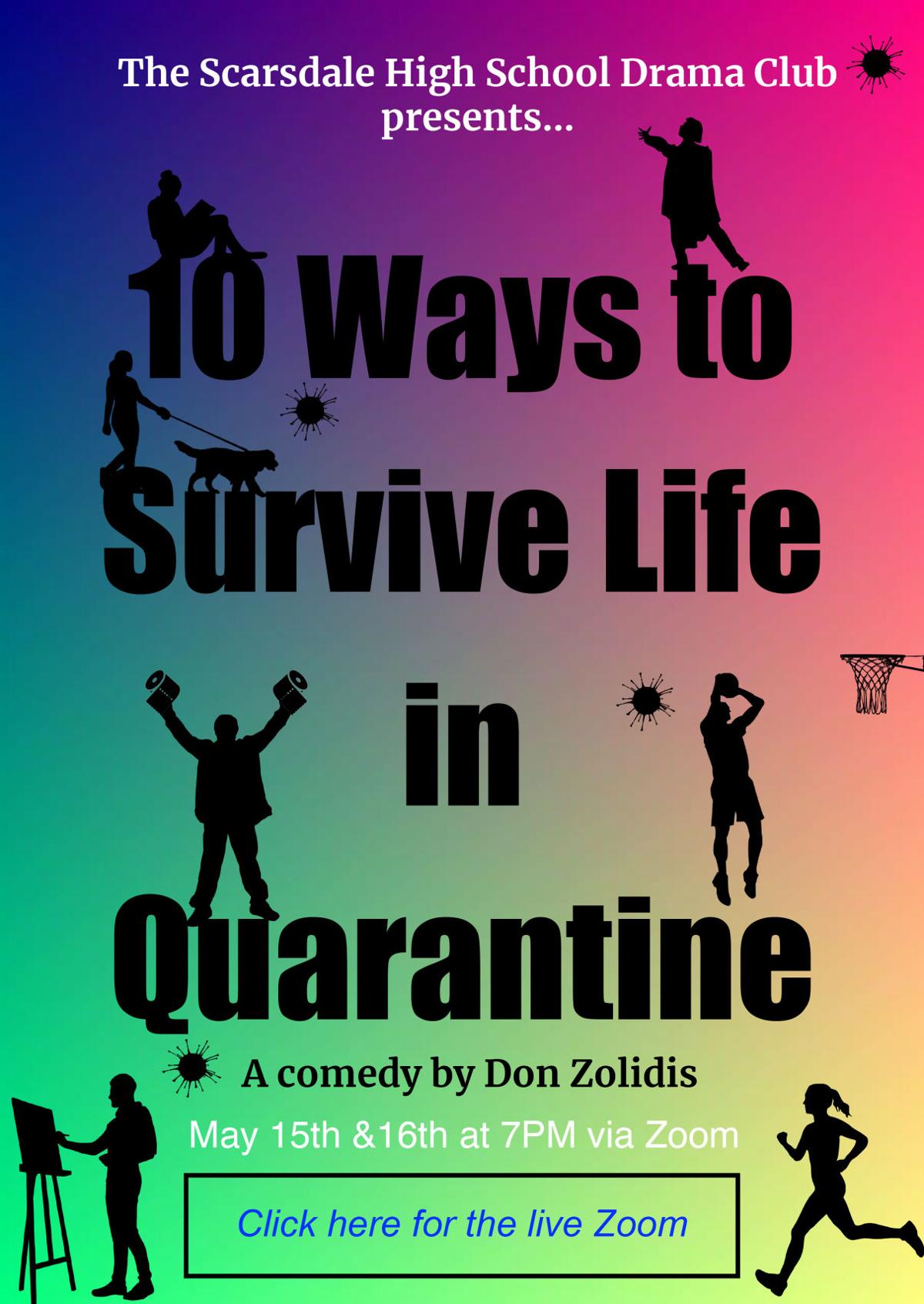 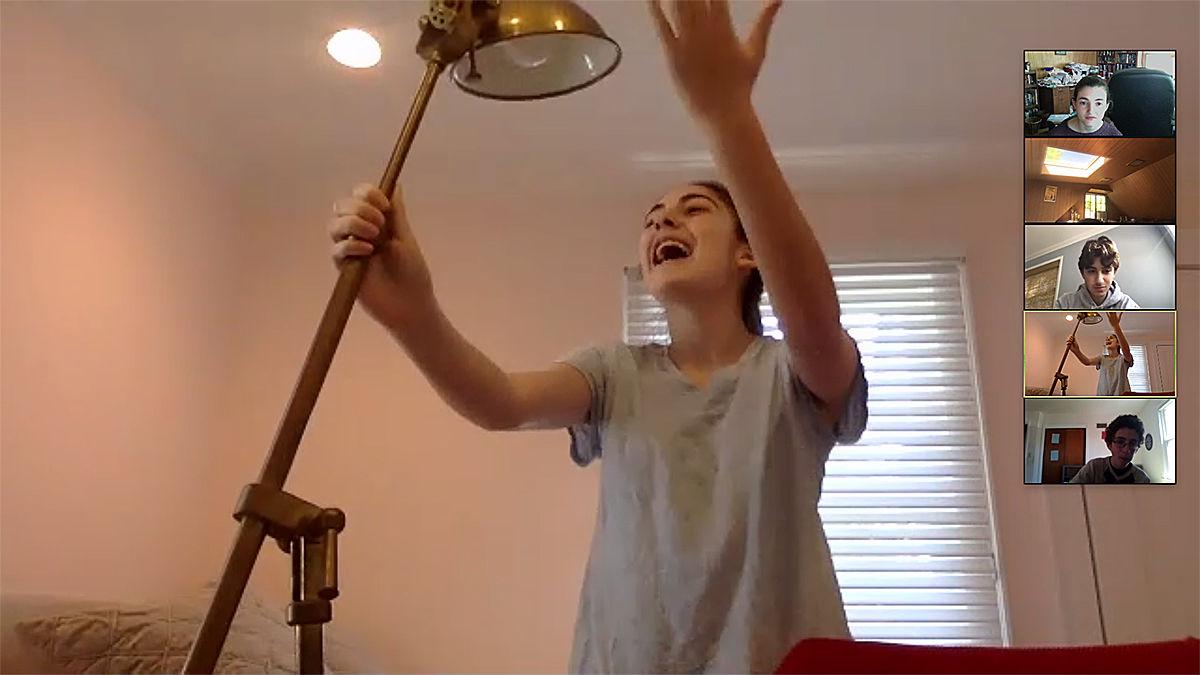 Isabelle Haller, Drama Club secretary and student director, sings to a lamp as she rehearses her character’s monologue in “How to Survive Life in Quarantine.” 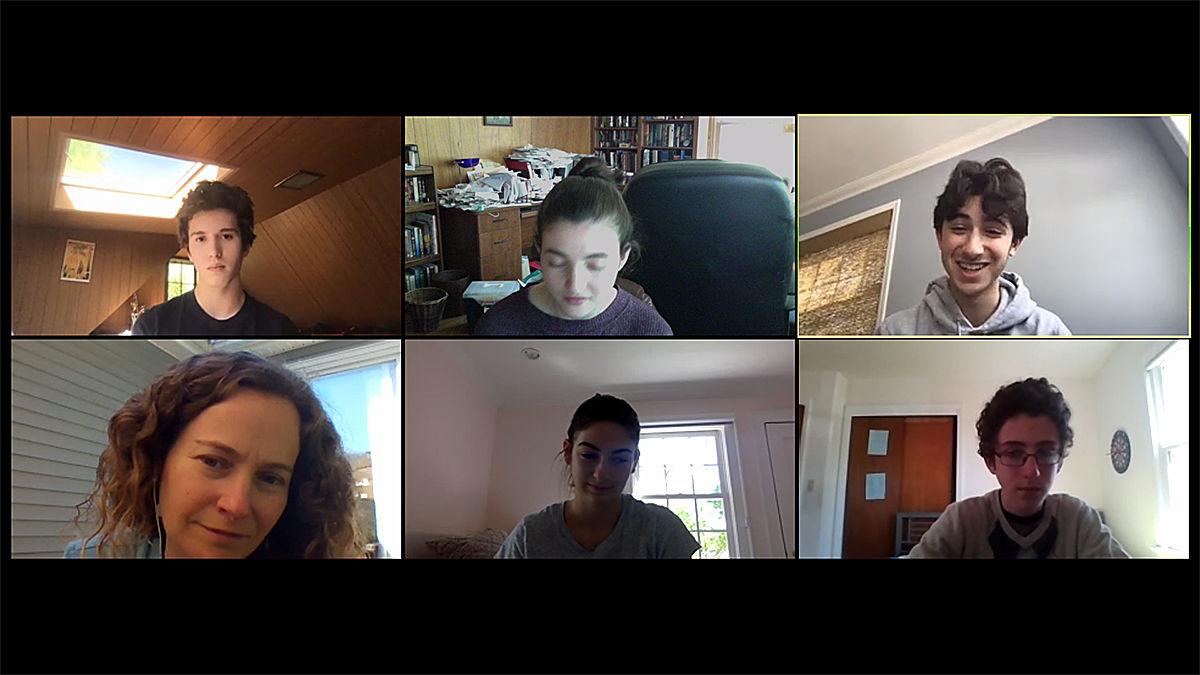 The Scarsdale High School Drama Club (SHSDC) is breathing new life into the classic theater idiom, “The show must go on.”

On May 15 and 16 at 7 p.m., the club will perform Don Zolidis’ “10 Ways to Survive Life in Quarantine” on Zoom. The show is free and open to the entire community.

“I believe this to be a way for the Scarsdale community as a whole to come together and watch a good show, helping the community get through this crisis,” Drama Club publicity officer Tiber Benaissa, a junior at SHS, told The Inquirer in an emailed statement.

The comedy, designed specifically to be performed remotely by performers in quarantine, explores 10 ways people can keep themselves entertained while social distancing — like starting a love affair with an inanimate object, for starters. The show consists of 30 monologues acted by 30 unique actors and features a “Host” and “Co-Host” who interact with one another and comment on the various characters.

According to Barbara Malecki, director of the SHS Drama Club, nearly 200 groups across the country have been granted rights to perform Zolidis’ play since it was released about six weeks ago. “It's kind of crazy that something could take off that quickly, but I think there was a huge need, and people just gobbled it up because they all wanted to be doing something,” she said.

Malecki came across the new work in a Facebook group for theater directors. “[Don Zolidis] is kind of well known among high school theater directors and also in the speech and debate world … He put in our directors’ group that he was writing a show about being in quarantine and he offered us to read it for free … It was really funny so I got approval from the high school admin and I applied for the rights and I got them,” said Malecki.

The show is very low budget, costing only $160 for both nights. Furthermore, it requires only commonplace props that most students already own, like lamps, stuffed animals and pets — yes, live pets.

Prior to this, with New Yorkers under stay-at-home orders, the Drama Club had been rehearsing remotely for their spring play, “You Can’t Take It with You.” However, Malecki and the cast ultimately determined that this particular play would not translate well to a digital platform like Zoom and so they decided collectively to discontinue rehearsals. “Toward the end, we realized that these rehearsals weren't doing us any good and we weren't having much fun,” said club president Zachary Loeser, class of ’21.

Without missing a beat, Malecki began casting for “10 Ways to Survive Life in Quarantine.”

Loeser said one student is joining all the way from Canada. “[This student] moved away last year to Canada and is no longer in the Drama Club but [he] was able to reconnect through this show … [It’s] an awesome opportunity for him.”

The Drama Club has been rehearsing the play remotely over Zoom three times a week for about five weeks now. “It's been a little anxiety inducing but it's also been kind of a thrill to know that we can pull this off so quickly and I can only do that because I have some really great leaders, especially among the juniors and seniors,” said Malecki.

To streamline the rehearsal process, Malecki enlisted the help of 10 other directors, all of them students. “I think the kids feel empowered that I did that because it's really their show,” she said.

The club’s secretary, Isabelle Haller, class of ’22, was also given the chance to direct. “Being a student director has been so fun and since I'm a sophomore I haven't really had the experience to direct before, but I found that I really love to help people grow as actors … and I think it's really helped me with my own acting.”

In addition to directing, Haller acts in the play. Her character, Bryn, is in love with a lamp. “I like my character, she's kind of insane, and I think it's just fun because I've never really played a character who's insane,” she said.

“I look like the role that I'm supposed to be playing,” he admitted. Peran added that it has meant a lot to him to be a part of this production. “I like how it's actually an ensemble cast. For other shows, they say it's an ensemble cast but there's still unevenness between roles and here it's truly equal.”

Peran is part of the Drama Club’s prop department and is also helping to produce the show.

Although there have been no in-person rehearsals, students have put immense effort into preparing for the show, on top of navigating their online classes and dealing with the innate stresses brought forth by the COVID-19 pandemic.

“I know they're all really stressed out right now with their academics and trying to keep on top of things … I am impressed with the way they've been able to balance and just show up in practice,” said Malecki, adding, “I didn't expect any less of them, but I know it's particularly hard right now because they're stretched rather thin.”

For Loeser, play rehearsals have been a godsend of sorts and have kept him “sane” in these difficult times. “I get up, I go to my Zoom classes, I do my work, and then when the clock hits 4 [p.m.] I'm like 'Yes!' I get to see all my friends, I get to do rehearsal, and it's a lot of fun.”

Haller similarly expressed gratitude for the opportunity to reconnect with friends through the play, especially seniors who will be heading off to college in the fall. “It makes me feel like we're a real community again,” she told The Inquirer.

In the words of Loeser, “This show really demonstrates the strength within our theater community … and our persistence to do what we love.”

“10 Ways to Survive Life in Quarantine”

Can't wait to see the kids perform. We are so proud of everyone.

Great article, Molly! Thank you so much for writing about us.