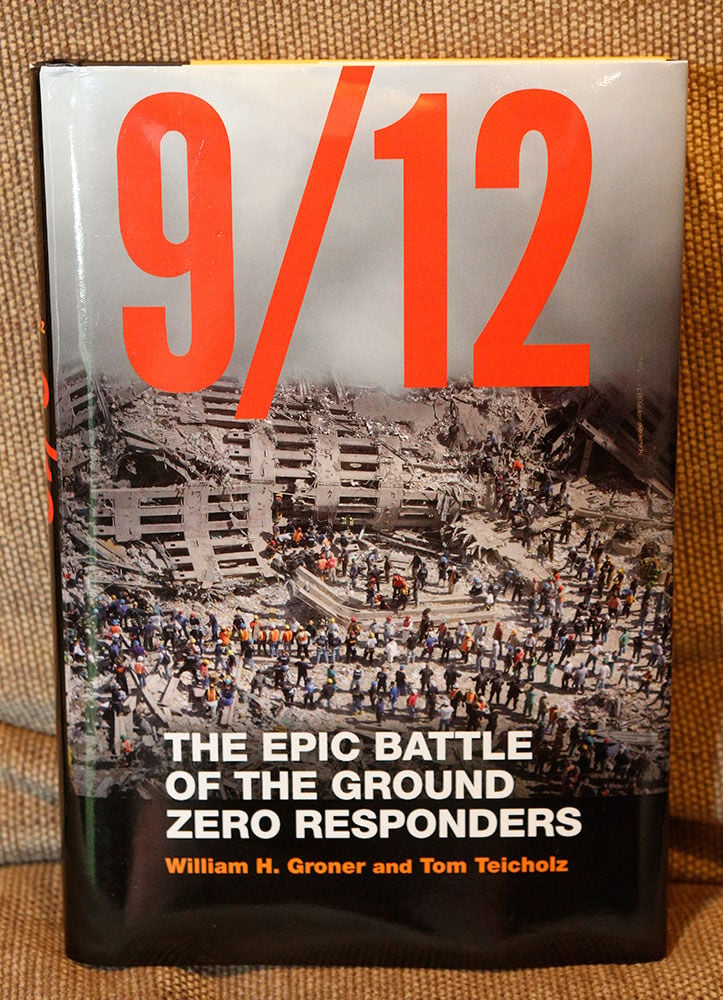 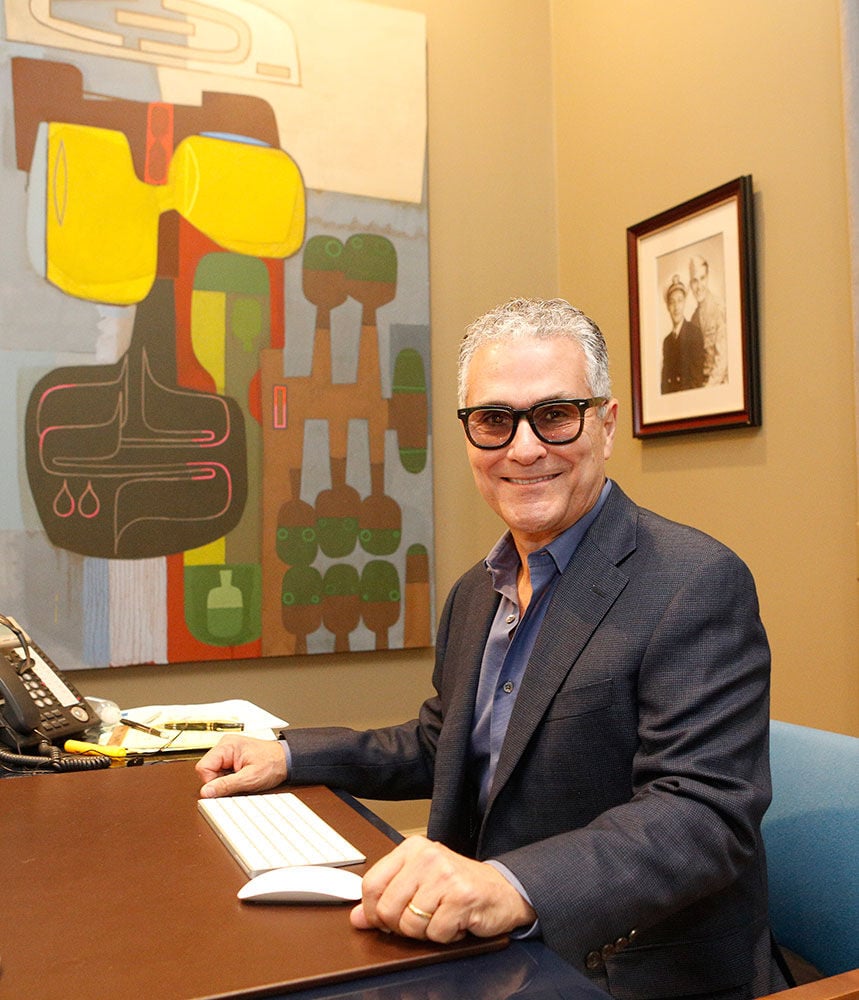 The terrible images captured on Sept. 11, 2001 will haunt us forever, always reminding us to remember and never forget. But few people saw what happened behind the scenes after 9/11 the way Bill Groner did.

The Bedford resident relived the painful memories every day for nine years working with thousands who responded on 9/12 and afterward to help clean up the pile of debris and help a nation heal. For nine years he talked to them every day — the work consuming him and taking over his life as one of the lead counsels for the legal firm representing those who responded to Ground Zero — and then he wrote a book about it.

To commemorate the 20th anniversary of 9/11, Groner will discuss his book “9/12: the epic battle for the Ground Zero responders” as part of a program at the Bedford Playhouse on Sunday, Sept. 12, at 2 p.m. titled “9/11, 9/12 and Today: an insider’s story and reflections on our shared humanity.” Groner’s book, co-written by Tom Teicholz, was recently optioned as the basis for a 10-episode TV series. It is a gripping and emotional tale that highlights the selflessness shown after 9/11 by the many people who rushed in to help at Ground Zero, many of whom fell ill as a result of exposure to toxins in the rubble.

“A trial lawyer’s dream is to represent the little guy against the big guy, especially when the person who is injured is a hero,” Groner explained. “The more the numbers grew, it became clear that we had to dedicate every waking moment to pursue this complex legislation and certainly the more clients we had, the more mandate we had that there was no room for failure. We’re representing 1,000, then 5,000, and then 10,000 heroes. It became sort of my role in life to get not only compensation for these people, but validation. These people were not only heroes, but they were being portrayed as though they were exaggerating illness even as they were dying, so it was trying to validate what they went through. Also, one of the goals of the litigation was closure, to end it. One of the necessary evils of litigation is to keep opening the wound. These people just wanted to move forward, closure was very important for my clients and their families.”

What started out with one New York Police Department (NYPD) detective coming into the office of the Worby, Groner and Edelman law firm in White Plains soon became what would be called the largest mass tort in legal history. The first call was from John Walcott, an NYPD detective and former ice hockey coach at Fox Lane High School. He had worked at the Ground Zero site for months and developed leukemia. A few days later Walcott’s partner came into the office, and the word kept spreading; eventually it would be more than 10,000 individuals.

Groner and his firm would deal with them all, each with his or her own story to tell.

“It was sickening to receive those calls day in and day out all day long,” admitted Groner. “It was the hardest thing to come into the office and hear how many more calls we had gotten from prospective clients who were healthy one day and all of a sudden they’re dying of cancer. It felt like a kick to the stomach every time we got one of those calls, and they just kept coming.”

Their heartbreaking stories drove Groner every day. First, as their lawyer working round the clock for nine years taking on their cases, and then inspired to tell the tale of what they did and what happened to them afterward.

Through his interviews and talks like the one this weekend at the Playhouse, Groner wants to remind people of the important lessons to be learned from 9/11 and beyond and what it means for everyone today.

“It’s important to remember 9/11 and 9/12 for when it happened, and also important to remember what it represents. To me, the selflessness in a time of need for a city, a state and a nation, where these people, without even thinking twice, they went [to Ground Zero] and despite what happened to them, so many of them say they would do it all over again. It sort of boggles my mind. We live in a me-first society — it feels that way with COVID, political disharmony, racial reckoning — and we all forget that in our heart and soul people are good and they care about each other and love each other and that we are social beings.”

His clients were a perfect example of people with a heart and soul, social beings who care about each other. Eventually, the clients would include people from all walks of life, not just the first responders from police, fire and ambulance units, but also iron and steel workers, sanitation workers, utility workers, construction workers of all kinds, anybody who responded to help clean up in the aftermath of 9/11.

It would prove to be a monumental task. Seven stories of debris filled with chemicals and particles of all kinds mixing together had to be removed from the hole left behind at Ground Zero to the Fresh Kills landfill on Staten Island. It would take nine months to clear away the pile.

Thousands of volunteers showed up from all over to offer their help. Government officials like New York City Mayor Rudy Giuliani and Environmental Protection Agency chief Christine Todd Whitman told them the conditions were safe.

Unfortunately, listening to the stories would only be the first step of a long, drawn out legal process.

After taking on the cases, the first step for Groner and his firm was to gather information to help prove what went wrong and how it impacted their clients. That proved to be fairly easy, the science was clear that there were dangers lurking everywhere in the dust. The medical results were also clear, thousands of previously healthy volunteer responders with no family history developing cancers at an alarming rate.

Apparently, the government agencies were also aware of the risks, setting aside a $1 billion fund to help pay for the responders who became victims. However, that is when the frustrations began as the legal team representing the city filed appeal after appeal, eventually burning through $200 million of that fund on legal fees, trying anything to get the case dismissed. Thousands of responders would die an agonizing death before the nine-year battle finally ended one step short of the U.S. Supreme Court.

“Outrage was a standard feeling we had when they kept doing things to try and dismiss the case. It was mind boggling and outrageous. That huge negativity makes it easier to be a litigator. It riles you up and shows you the dragon that needs to be slain. It gives you 24-7 fight when you’re representing 10,000 heroes, and people are denying them their voice, you’re not human if that doesn’t energize you more to double down and do everything you can for them.”

It was one of those days sitting in a courtroom fighting for his clients that Groner decided these stories needed to be shared.

He was listening to the testimony of one of his clients, NYPD Detective Candice Baker. Groner said he would never forget Baker’s responses as she answered one question after another on the witness stand. A young mother battling cancer, Baker described what she did as a responder, logging thousands of hours both at Ground Zero and at the Fresh Kills landfill working on the debris — and she would do it all over again, she had said.

“There was a moment during the fairness hearing when Detective Candice Baker spoke, and I never felt more honored to have represented someone. It was such a beautiful message with such beautiful energy that the world should know about. I thought what Detective Baker said represented my clients so well, and I thought … their stories, as well as the litigation, the science, the politics, all of it was a story that had to be told.”

Groner contacted journalist Teicholz, and together they co-wrote the book based on the experiences and emotions of several clients in the case as they navigated the nine-year post-9/11 court case. The book provides the details of the litigation, the science behind the 9/11-related illnesses, the politics and everything behind the scenes, while highlighting the real effects it had on the real people who responded with acts of heroism.

Now that the monumental case has been settled, and the book is finished and published, Groner said he is personally ready to share his insider’s view of the responders and what they went through.

“When the case was settled I wasn’t thrilled, because I didn’t think we got them enough money — and money can never compensate for that kind of suffering — but I feel it was a fair settlement. There was validation and closure, which was very important. The justice system worked, faced with the impossible task of 10,000 individual lawsuits, it was a huge challenge and it was resolved and showed that the system works.”

William Groner’s book, “9/11, 9/12 and Today: an insider’s story and reflections on our shared humanity,” is available on Amazon.com.

An insider’s story and reflections on our shared humanity

A recording of the event will replay on the Bedford Playhouse youtube.com channel.