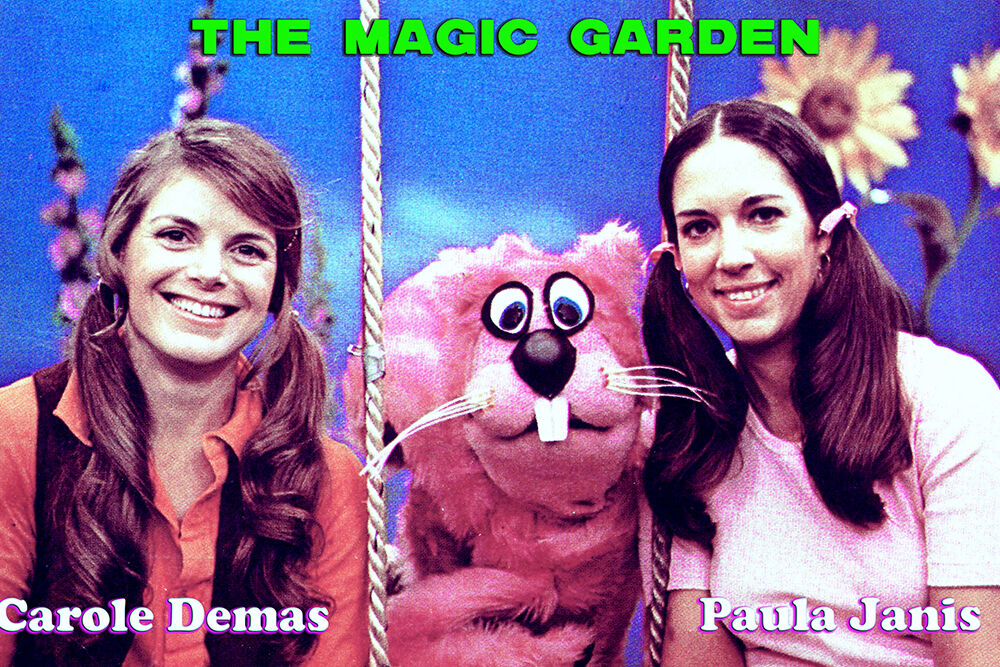 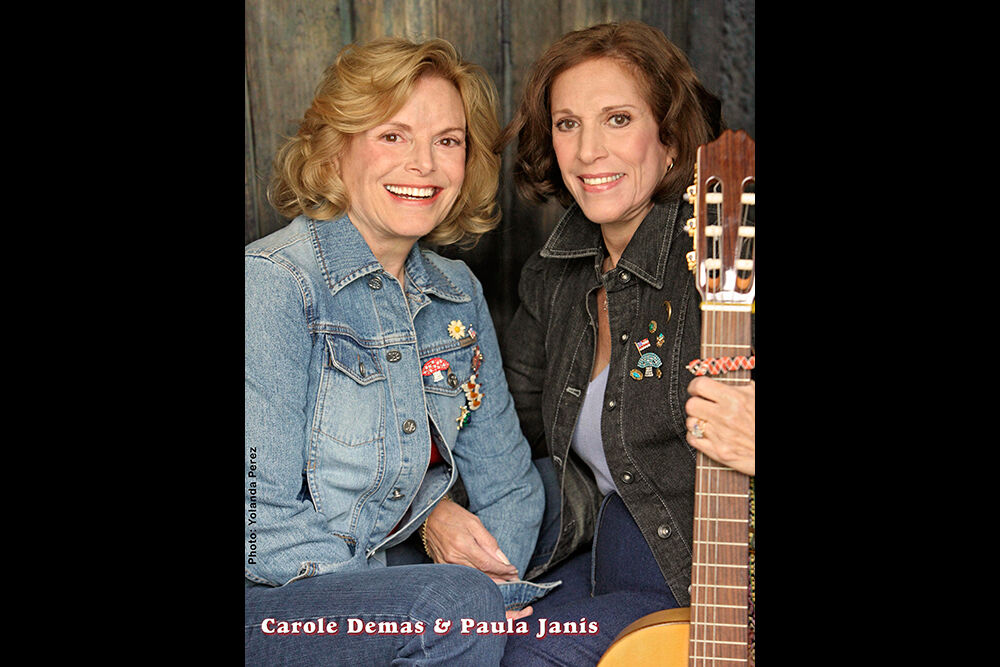 Singer Mariah Carey is known and loved the world over. But whom does the idol herself idolize? Fans learned the answer when the diva’s bestselling memoir, “The Meaning of Mariah Carey,” was published last month. In it, she gives a shout-out to Carole Demas and Paula Janis from “The Magic Garden,” which Carey describes as “a popular local kids’ TV show I loved [growing up].”

A fan alerted Demas, who lives in East Irvington, and Janis, a former Scarsdalian who resides in White Plains, to the book mention. Thrilled, the twosome recorded a song for Mariah, and then posted it to their Facebook page.

Carey herself saw it — and sent a video back to them, gushing, “I love you so much! You made my entire life!”  She also sent them a gift and signed copies of her book.

Anyone surprised by Carey’s reaction obviously didn’t grow up in the New York metro area, where “The Magic Garden” aired on WPIX from 1972 to 1984. From Scarsdale to Saddle River, Edgemont to East Lyme, children eagerly tuned in to watch “Carole and Paula,” who sported bell-bottoms and beribboned pigtails. Together with their puppet sidekicks, Sherlock the squirrel and Flapper the bird, the pretty young women told stories, shared jokes and sang.

As Mariah Carey’s tribute video proves, the ladies, now both 80 years old, still hold a special place in many people’s hearts. And now they’re hoping to bring the magic back: on Oct. 16, in an interview with WPIX, the duo announced that plans are in development for an animated reboot of their classic show. “We can’t say too much about it right now…” Demas cautioned, as Janis added, “…but we would be very excited to bring ‘The Magic Garden’ to a new generation of children.”

The venture came about serendipitously, after the two performed locally last year. “Following the show, a woman came to see us and said she and her team had a project in mind, and would we like to have a meeting?” Janis said. “Well of course, why wouldn’t we?”

What they learned about their new friend and her colleagues impressed them. “They are winners of every kind of award — they worked on ‘Sesame Street,’ and they have an award-winning animated cartoon running on television called ‘Hero Elementary’,” Janis said. “And if they are interested in doing this [animation project with us], boy, I don’t think we could find a better team.”

Demas puts a philosophical spin on their latest stroke of luck. “You never know, when you put yourself out there, what it’s going to bring,” she mused. “And if you want to succeed, you need to take leaps of faith.”

It’s a mantra Demas and Janis have lived by, both individually and throughout their 66-year friendship. The two first met as 14-year-olds at Midwood High School in Brooklyn: “We were in the mixed chorus,” Janis explained. They attended different colleges, but bumped into each other again as graduate students at New York University’s school of education.

“We heard each other’s names called, and we jumped up,” Demas said. From then on, “we took the subway together from our parents’ homes in Brooklyn, where we were still living, and went to school together.”

Following school, “Paula got a job teaching kindergarten in Brooklyn in a decrepit neighborhood in a decrepit building,” Demas reminisced. “And I was looking for a job … and she called me and said, ‘Get down here right away. The teacher I was supposed to be teaching with is pregnant.’ In those days, if you can believe how archaic it was, you couldn’t teach if you were pregnant.”

It was in this shabby school building that the seeds of “The Magic Garden” were planted. “It was the two of us with 50 children,” Janis said. Many of the kids spoke no English. “So we sang, that’s what we did,” she said. “We sang and we jumped up and down as we told stories and acted them out.”

Demas, meanwhile, nursed theatrical aspirations. In college, she’d performed as a minstrel with a Shakespeare Festival. “Paula and I had both noticed that the New York Shakespeare Festival did not have this institution of minstrels,” she said. “We sent a letter to [producer] Joseph Papp.” To their shock, the Festival invited them to audition. The women recruited their brothers, formed a quartet, and landed a minstrel job.

Thrust into the spotlight, Demas quickly attracted the attention of agents and, after a year of teaching, she left school to pursue acting full time. A natural ingénue, she began landing tasty parts, playing Louisa in “The Fantasticks” at the Milwaukee Repertory Theatre and spending time with the Penn State Rep, as well as taking on various roles in theaters in the New York area.

Then, suddenly, two incredible opportunities materialized almost simultaneously: she was cast as Sandy in the original Broadway production of “Grease,” and television came knocking. “My agent got a call from WPIX. They were thinking about me as the host of a children’s show,” she said.

Upon learning she’d be hosting a cartoon show, however, she balked. “All I could think about was Paula and me in the kindergarten, working with those kids and how we had reached them together, and how great it would be if she and I could do a show for kids together,” Demas said. She convinced the WPIX honchos to let them audition as a duo (by now, she had a child and had left her teaching position), and they were awarded their very own program.

From its debut, “The Magic Garden,” which Demas filmed on her day off from “Grease,” was a hit. “Kids understood that we were really friends,” Janis said. “It wasn’t just some made-up show with two people who hardly knew each other.” In fact, the show only had a one-page script — the hosts’ banter was mostly spontaneous.

Nothing about the program was fancy. Sherlock the squirrel was made from a bath mat, and the crew “were the same ones who shot the ball games,” Demas said. But the love was there, and the formula worked. “Children sent us fan mail, including peanuts for Sherlock,” she noted. Toward the end of the ’70s, Demas and Janis began doing live performances, as many as five shows a day.

After the series bowed in 1984, the ladies continued their live shows, and their lives. Janis, who had moved to Scarsdale in 1978, raised her three children — Victoria, Monica and Gregory — here, while also teaching in Yonkers for a span in the 1990s. (Beyond “The Magic Garden,” her show-biz resumé includes having been the lead singer for a folk group called the Wee’Uns and performing on children’s educational records and videos.)

“The Inquirer has been dear to my heart for many years,” Janis said. In 1996, when her Fox Meadow home burned down in a fire, “the picture of my house was on the Inquirer’s front page,” she recalled. “But also when I married my lovely husband, Paul Schueller, our announcement was in the paper with a picture.”

While she wasn’t a celebrity-about-town, Janis did occasionally encounter star-struck Scarsdale children. “On Halloween, when the trick-or-treaters would come, they would sit on my front porch and they would just stay there! It was really pretty funny,” she said.

Another time, when one of her daughters was in grade school, “they were supposed to be telling what their parents did. And she said, ‘My mother was Paula from ‘The Magic Garden.’ A couple of kids in her class didn’t believe it, [which] was very distressing … I had to put my hair up in ponytails and get into my Magic Garden outfit and go to school and tell them that Paula from ‘The Magic Garden’ really was her mother.” Scarsdale, she said, “was a great place to live in. It’s still a great place to live in!”

Demas, for her part, has continued her distinguished acting career. Among its highlights have been originating the title role in Stephen Schwartz’s “The Baker’s Wife” and playing Luisa in “The Fantasticks” at New York’s Sullivan Street Playhouse for two years. She has also had guest roles in many classic television series, including “Kojak,” “Mannix” and “Barnaby Jones.” Currently she’s working on her contribution to a book celebrating the 50th anniversary of “Grease” on Broadway, scheduled for release in February 2022.

Like Janis, Demas has embraced her Westchester home; she and husband Stuart Allyn, a designer, audio engineer and producer, have lived in East Irvington since 1987. “I am director of the East Irvington Civic Association,” she said proudly. “We have preserved almost 300 acres of open space in the last 20 years.”

And what will the next few years bring for Carole and Paula? Undoubtedly more music (the two are scheduled to play a virtual concert in Demas’ house at the start of next year) as well as other fascinating projects — in fact, in addition to the plans for an animated series, there’s a documentary about them in progress.

No matter what the future brings, the friends will face it together. “We have shared everything,” Demas said. “Life has not necessarily been a magic garden for either of us, but we always have each other.”