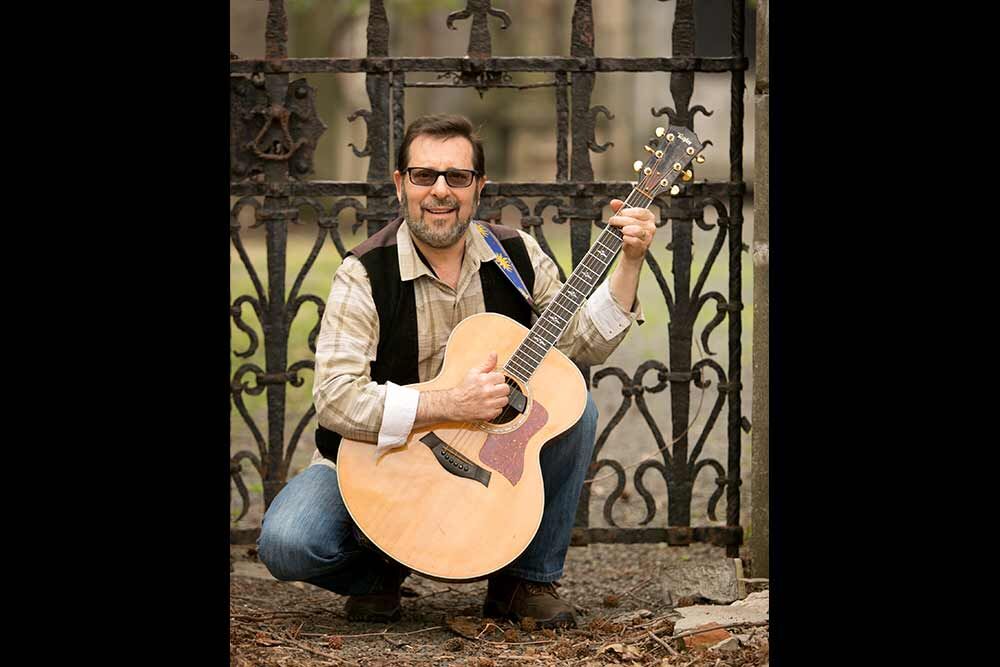 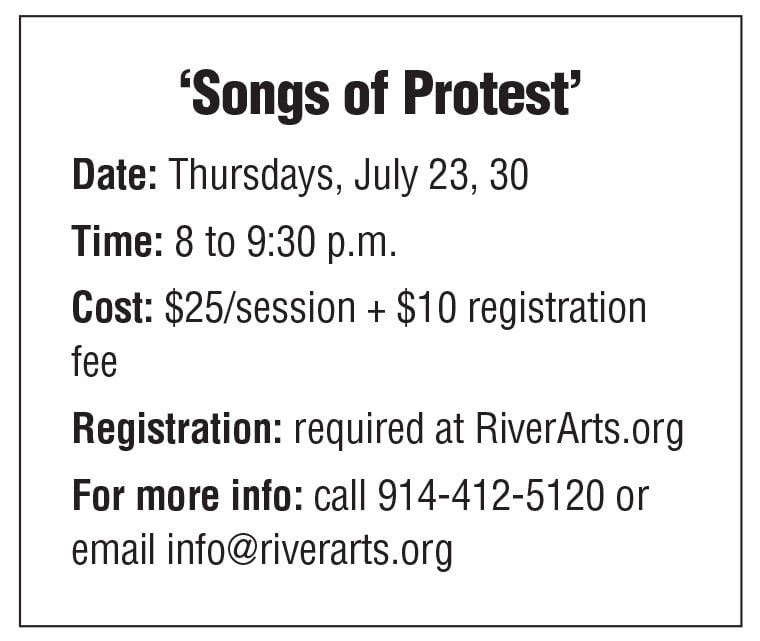 There’s probably not a soul in America unfamiliar with the refrain, “We Shall Overcome,” but it’s doubtful anyone has heard the wealth of songs RiverArts is offering in a three-part series, “Songs of Protest: a Survey from the Mid-Twentieth Century to the Black Lives Matter Movement.”

Singer-songwriter and Hastings resident Adam Hart, 62, a member of the folk-rock band Riverrun and co-producer of the 2019 RiverArts Music Tour, will lead interactive workshops on July 23 and 30, from 8 to 9:30 p.m., exploring familiar protest songs, lesser-known ones, and music emerging from the national dialogue on race, spurred by the Black Lives Matter movement.

“Songs of Protest” isn’t a one-way Zoom session. Hart conducts the 90-minute workshops from his solar-powered home studio as participants listen to music, watch videos, explore music history and consider thought-provoking questions. They’ll also learn songs from Hart and from one another, sing together and be recorded for a video Hart will create.

No one is expected to be a pro, Hart explained. “I’m trying to be flexible about people’s abilities. … The human element of imperfections is something I embrace; I’m not looking to make studio recordings.”

To choose his material, Hart did a deep dive into music history. “There are thousands of protest songs in different genres,” he said. “That’s just the tip of the iceberg.”

The three workshops are arranged chronologically. The first, which debuted July 16 and is available for replay on RiverArts’ YouTube and Facebook events page, examined the foundation of protest songs, from the 1930s through the 1960s. Revered artists are on the list — Woody Guthrie, Odetta, The Weavers, Pete Seeger, Phil Ochs, Joan Baez and Bob Dylan, to name a few, who had a profound impact on the collective conscience of the nation.

Workshop No. 2, on July 23, will showcase an integrated mix of protest songs from the 1960s through the 1980s, by artists including Aretha Franklin, James Brown, Buffalo Springfield, the Beatles, Sam Cooke, Marvin Gaye, Gil Scott-Heron and Hart’s favorite, folk trio Peter, Paul & Mary.

Hart focuses on that period’s racial divide in the music industry, and how the predominantly white and male business capitalized on the themes of the civil rights and antiwar movements to attract record-buyers. “Instead of going to protests, they went to concerts,” he summarized. One question Hart poses in this workshop is whether music marketing exploitation helped diffuse the energy of those movements.

On July 30, workshop participants will hear music from the 1990s to the present relating to Black Lives Matter, immigration, #MeToo, LGBTQ rights, political resistance and the environment.

The music of “Songs of Protest” is the soundtrack of Hart’s life. “These are songs I grew up with,” he explained. “My mother was a folkie, my father was involved in civil rights protests in the ’60s, and they would march,” he recounted. “As a child I was taken to a lot of peace protests.” In high school, Hart became involved in antiwar protests. He’s still an activist, and now focuses mainly on the issue of climate change.

Hart’s music is rooted in the folk rock of the 1970s, classic rock and blues.In addition to his recordings with Riverrun — most recently 2018’s “Love is Stronger” — for 17 years he’s been song leader at Woodlands Community Temple in White Plains, playing Jewish “roots rock,” teaching classes, and singing and playing guitar for Rabbi Billy Dreskin’s occasional “A Joyful Noise” musical service on Friday night.

It’s not just musical knowledge Hart wants to share in the workshops, or musical voices he wants to encourage. “I’m hoping people get a renewed energy for their own activism,” he affirmed. “I’m hoping people can reframe the way they think of their voices, so we can meet the moment with our feet on the ground, and our eyes and ears wide open.”