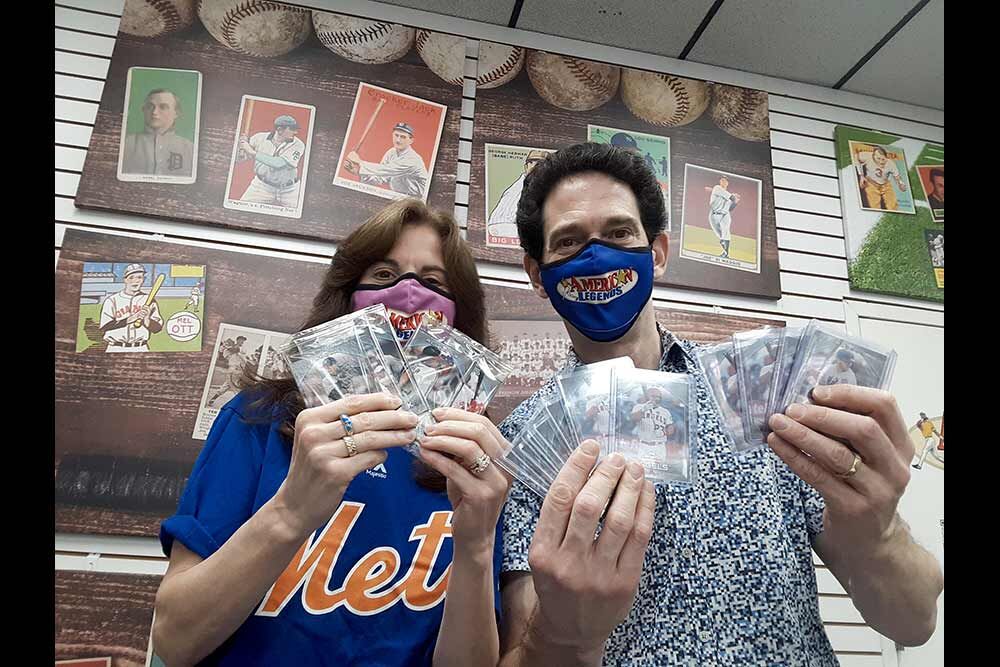 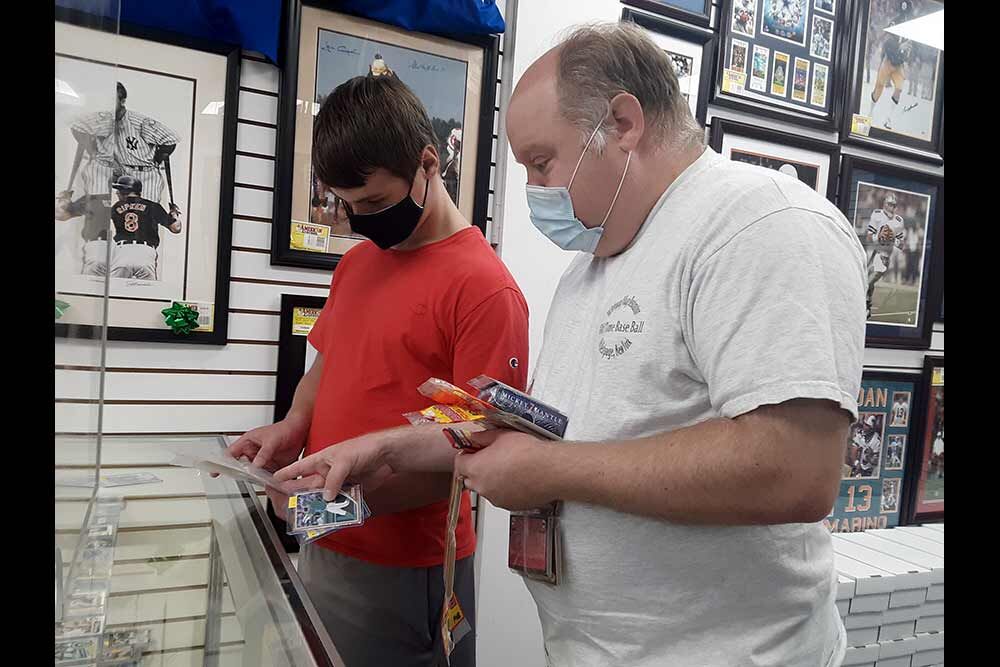 Dad Carl and son Ryan Avidas check out some old and new baseball collectibles at American Legends on Aug. 8.

Donna Rubin cried the day American Legends was forced to close its doors in March due to growing concerns over COVID-19. From the time the cards, comics and collectibles store on Central Avenue reopened June 9 through Topps National Baseball Card Day (NBCD) on Saturday, Aug. 8, she hasn’t stopped smiling. Now she just does it behind a mask.

The sports card industry has seen a major resurgence during the pandemic and when Donna and Mark Rubin opened their doors an hour early for NBCD, customers flooded the sidewalk from their cars not only to get free one-day-only packs of cards and an exclusive Pete Alonso card with a $10 purchase, but to buy many more products from new 2020 releases to past items from their childhood as all ages made their way to the special event.

“The industry has just exploded,” Donna said. “People who were collecting 20 years ago who stopped are now back into it and there are a lot of new collectors. During the shutdown, cards started going up in value and there’s been increased interest, so once we opened back up it became even more frenzied.”

With the major sports leagues back in action, baseball is always the big draw, but basketball products are “super hot,” football is “heating up, too” and hockey is “not as hot,” but still selling, Donna said.

The Topps promotion — which the card shops purchase in order to draw customers to the store — goes a long way in promoting the industry.

“It’s cool that they give you free cards,” Ronen said. “The baseball season is very different this year. I saw this place on the list and I wanted to come get a free pack.”

“I started after I met Tiger Woods,” Ronen said. “Then I went from there. I’ve been going to stadiums and meeting players. We went to Marlins Stadium last season and went on the field and met a lot of players. I love collecting. There’s something about it. The worth, the value.”

The card collecting industry has been through many changes over the decades and would have died several times over if not for new innovation in the hobby. After the late 1980s saw overproduced, virtually worthless offerings, Upper Deck in 1989 — Ken Griffey Jr.’s famous No. 1 rookie — and Topps Stadium Club in 1991 — printed on glossy Kodak stock — were better alternatives to brands like Score, Fleer and Donruss, which soon died off. In the 1990s, Topps decreased the number of cards in its sets, a bad sign for sure.

In the very late ’90s and early 2000s collectors began to see some new trends, most notably game-used cards that included a piece of jersey or bat in the card itself. Autographs soon followed and then came the big market of SP and SSP — short print and super short print — cards.

Additionally, the retro designs on cards put the current players on classic styles of cards from the 1950s to the 1990s, a throwback for those looking to regain the nostalgia of collecting when they were kids.

Topps, which became the exclusive card of Major League Baseball — Upper Deck fought and lost in court — began putting out seemingly countless sets mostly with vintage designs, and in 2016 changed the game once again with Topps Now, where cards would be available for order for 24 hours based on the previous days events on and off the field. Base cards cost $9.99, with a lower price for bulk orders. Dr. Anthony Fauci’s failed ceremonial first pitch from this season set a record with 51,512 orders. The previous record had been Vladimir Guerrero’s debut card from April 2019, at just under 19,396.

“It’s great all the sports are back to some degree,” Mark said. “There are some big releases this week. It’s like the late ’80s — everyone’s into cards right now. The product is so much better. People have had time in the lockdown to dig out their cards and they’re really into it again. The stuff that’s been beaten down over the last 25 years is starting to come back and it’s nice to see. It’s the nostalgia of guys in their 40s. Their kids are getting into it.”

Fifty-one-year-old Carl Avidas brought his 15-year-old son Ryan to American Legends. It was the first time for both of them.

Carl still remembers the first pack of cards he ever got. In 1976, his Easter basket included a pack of Topps cards. There was a Babe Ruth all-time leaders card inside. Though he was more familiar with the modern-day players like Bobby Bonds and Thurman Munson, his dad taught him about The Babe that day. “I still have the card,” he said.

He built his collection using the change from running errands for his parents and instead of buying candy, he bought Topps packs for a dime at first. He got gum and his heroes all in one place. “I never bought candy because you got gum, which only lasted for a minute, but the cards lasted forever,” he said.

Carl was loyal to Topps — ’80s and ’90s Upper Deck, Donruss, Fleer, Score and Pinnacle didn’t do it for him — but also was drawn to the 1959 Fleer Ted Williams set and the 1962 Post set. He took a break from collecting in the late 1980s and into the early 1990s when he was in college — “You had girls and other things and studies,” he said — but kept his original collection and later built on it through the internet.

Watching his son search for treasure at American Legends the only thing he noticed that was different was the prices. “I used to count pennies and he’s counting dollars,” Carl said.

Ryan has been collecting for about six years. “I found old stamp sheets and Tim Tebow, Gary Sanchez and Aaron Judge cards,” Ryan said. “I like collecting stars and players I think will make it. Also players I look up to, like Tim Tebow being Christian. I like him the most because I’m a Mets fan.”

Last Saturday, American Legends saw a mix of loyal and new customers of all ages and they look forward to more busy days at their store.

“Our industry is experiencing something we haven’t experienced in over 20 years,” Donna said. “For people I think it’s an escape from everything that’s going on in the world. They can come in and we don’t talk about anything but sports. Not COVID, no politics. It’s all fun.”