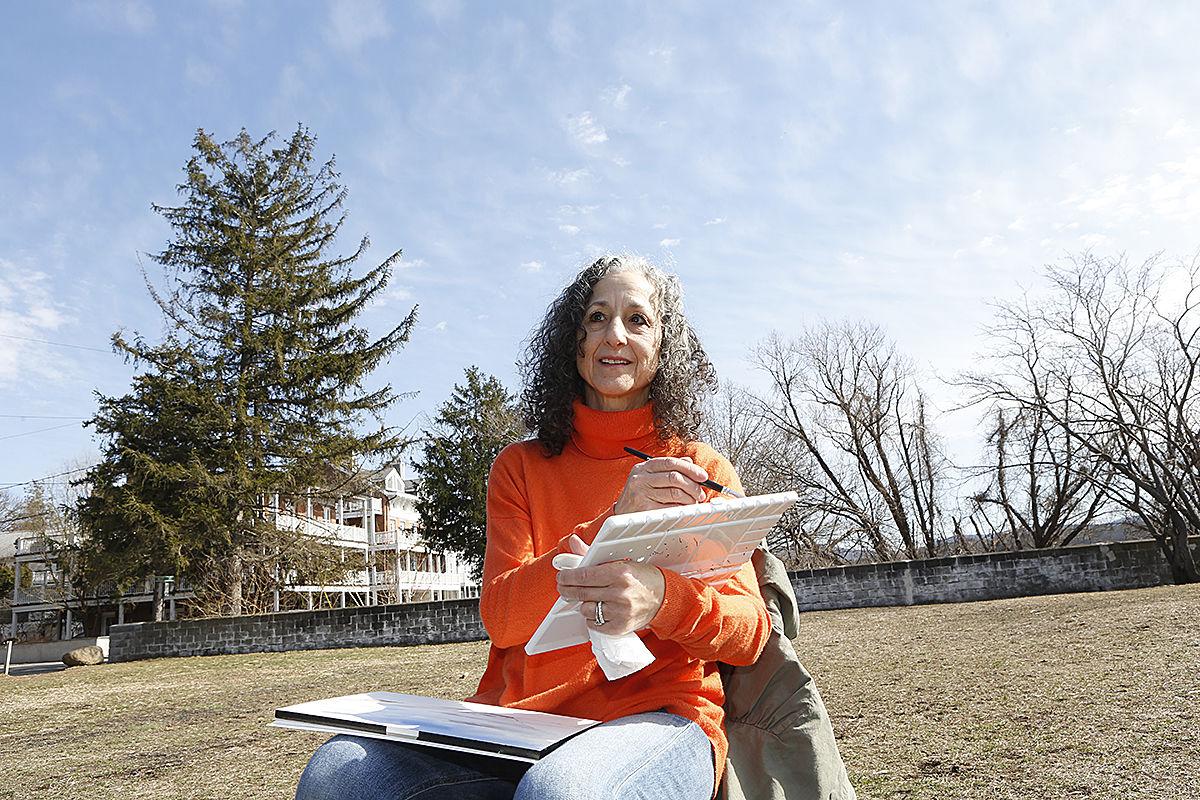 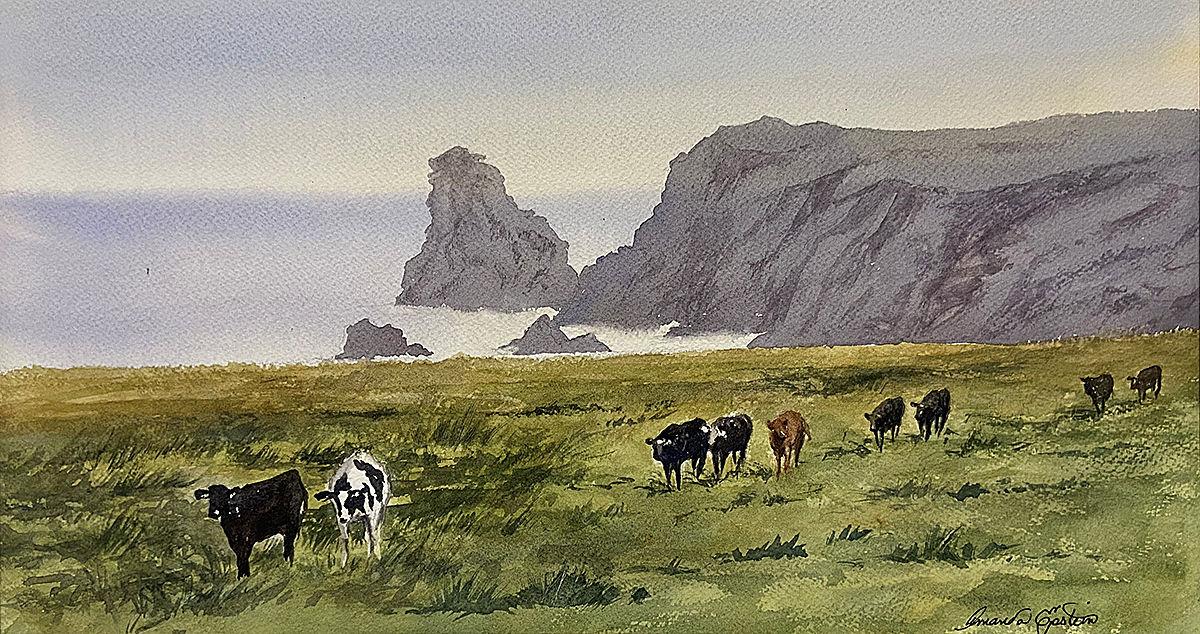 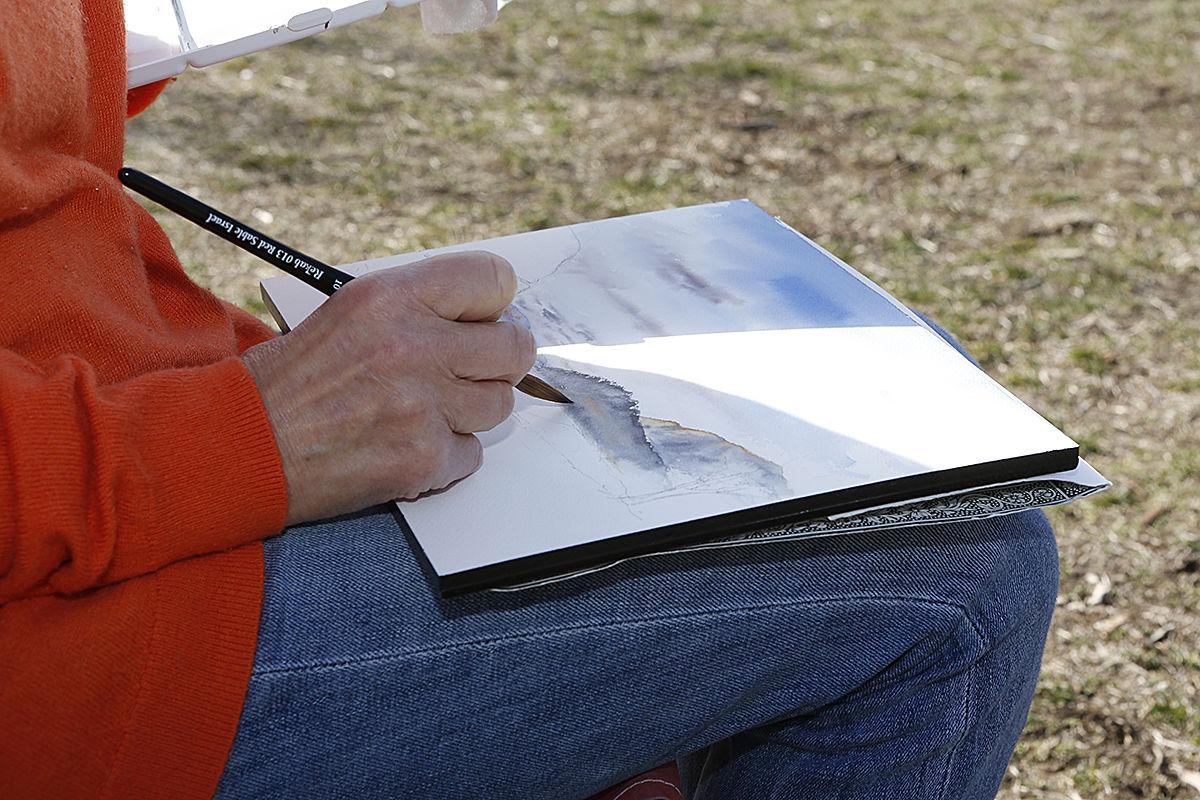 Derwentwater from Castlehead by Amanda Epstein 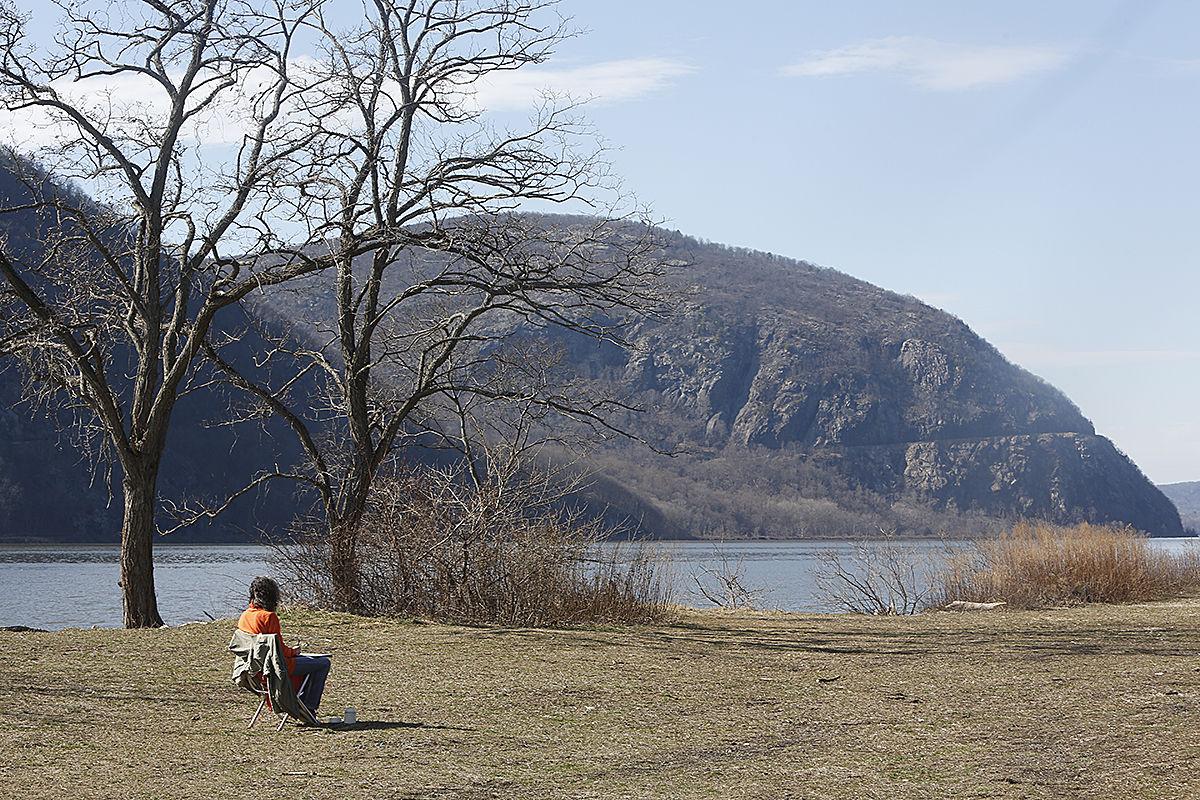 Amanda Epstein in her element.

Updated March 21: This exhibit is postponed due to the mandated closure of the venue in Scarsdale.

Amanda Epstein and her husband don’t choose their vacation destinations based on food or five-star hotels. Nor do they focus on adventure-packed itineraries. Instead, “We go on trips because it’s somewhere I want to paint,” said Epstein, a watercolor artist who was raised in Scarsdale (she attended Fox Meadow Elementary School) and currently resides in Putnam Valley, New York.

“My husband carries the chairs. We will go hither and thither and he will bring all his New Yorkers [magazines] to read, and I paint. I love plein air, which means painting on location.” Epstein has captured sweeping vistas in England, Ireland, Sweden, the Czech Republic and Denmark, among other countries.

Rather than book a ticket to take in these same views, you can see them as Epstein did, by visiting her art exhibit at Scarsdale Frame and Art, 4 Depot Place. She’ll be showing some 30 of her works there 9 a.m. to 5 p.m., through May 1.

The road to plein air painting — indeed, to artistry itself — was a long and winding one for Epstein. Born in New York City, she moved with her family to Japan at the age of 1. She would spend the next eight years there before business took her family back to New York; they first rented a home in Edgemont before settling in Fox Meadow.

“I felt a little bit displaced to begin with,” Epstein admitted of her Scarsdale relocation. People would ask her to speak in Japanese — she spoke fluently — “and then look at me as though I had two heads.”

She was also skipped a grade ahead in school since she already had mastered skills such as cursive writing at her international school in Japan. Still, Epstein said, she soon got into the swing of things. “I actually had a very nice time and made friends,” she recalled.

While school took up much of her time, so did her passion: dancing. “I always took ballet lessons all the way through school,” she said. “Once I hit high school, at that point I was taking ballet classes in the city. I went to the School of American Ballet and I would leave [high] school early and take the train to the city, then the 104 bus and go to class, then reverse it to come home.”

In 10th grade, Epstein won a scholarship to a fledgling ballet school in Buffalo, New York. The next two years consisted of a grueling routine of dancing and studying. “I loved it, but I was getting tired,” she shared. “I missed home, too, so I came home at the ripe old age of 18.”

She obtained a traineeship at another prestigious ballet school in Manhattan, “but I was burnt out,” she admitted.

After a trip to the Metropolitan Museum of Art one afternoon, she had an epiphany: “I’d always loved drawing and doing all that,” she said. “I looked around and said, ‘Okay, that’s what I’m going to do.’”

Soon after, Epstein enrolled at the Parsons School of Design. “I studied illustration, and within that course there was painting and life drawing and I loved it. I was very happy with that,” she said. After graduating with a certificate in illustration, she landed a job at Random House, where she spent four years illustrating publicity materials.

Then love entered the picture: Amanda met Eddie Epstein, an employee at IBM. “The next leg of my life started,” she said. The two settled in Putnam Valley and she began a new career as an independent artist. (Epstein also teaches dance at Club Fit in Jefferson Valley and Briarcliff.) “We’re only about 10 minutes from Cold Spring and the Hudson River and Garrison, and as an artist I love all of that,” she said.

The couple would go on to raise two daughters, and family life would impact her choice of artistic materials. “I had two little children and [my paints] had to be something that I could easily put away,” she explained. “And in those days, the oils smelled of turpentine. I didn’t want that stuff around either.”

Beyond that, “I really got into the luminosity and the instantaneousness of watercolor,” she said. “You put it down and you have to move quickly. With oil, you could put the painting away for a week and come back and change it. It’s not the way watercolor is, because if you work on it too much, it looks it, and dies.”

Epstein’s approach to painting has won her acclaim: She has had several solo and group exhibits. She is a prize-winning member of the Salmagundi Club in Manhattan, as well as a signature member of the Northeast Watercolor Society. Her paintings are part of numerous corporate and private collections.

Typically, Epstein paints landscapes and cityscapes, some with people in them. “I love European scenes. I love old. Old cities, old buildings, old paintings,” she said. “I would say I am an impressionistic type of painter. You always know what it is I’m painting.” She cites the British masters as her inspiration.

And she hopes people will in turn be inspired by her work. “I hope they get out of it what I got out of doing it,” she said. “I hope they get a sense of the place if they like that kind of scenery. So I hope they get drawn into it, and taken to a certain place. Basically I want them to get pleasure out of it, and to come out of the show saying, ‘Oh wow, that was a really nice thing to see those scenes.’”