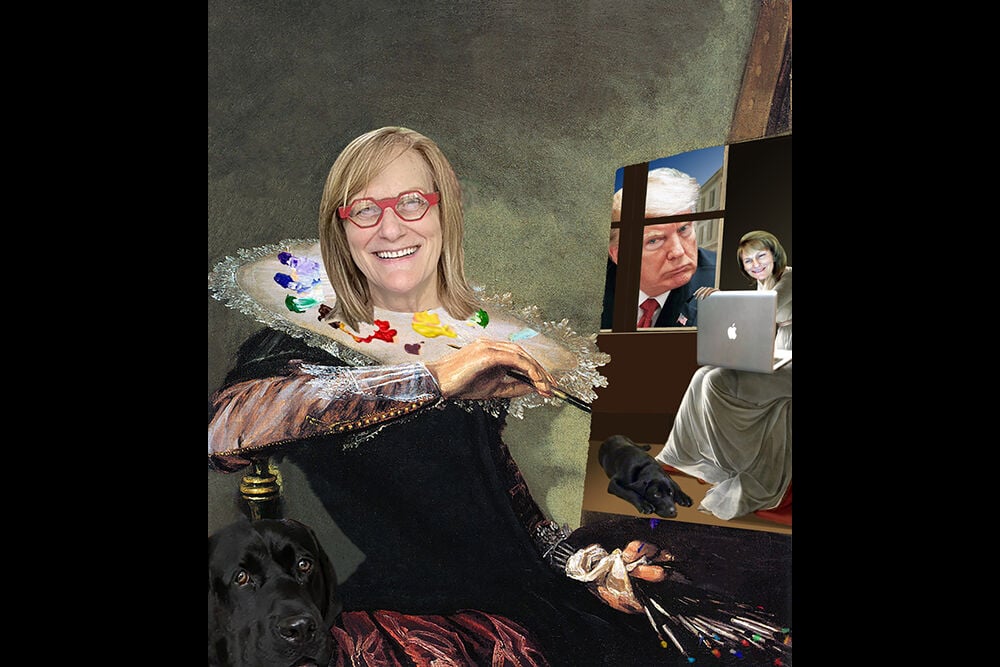 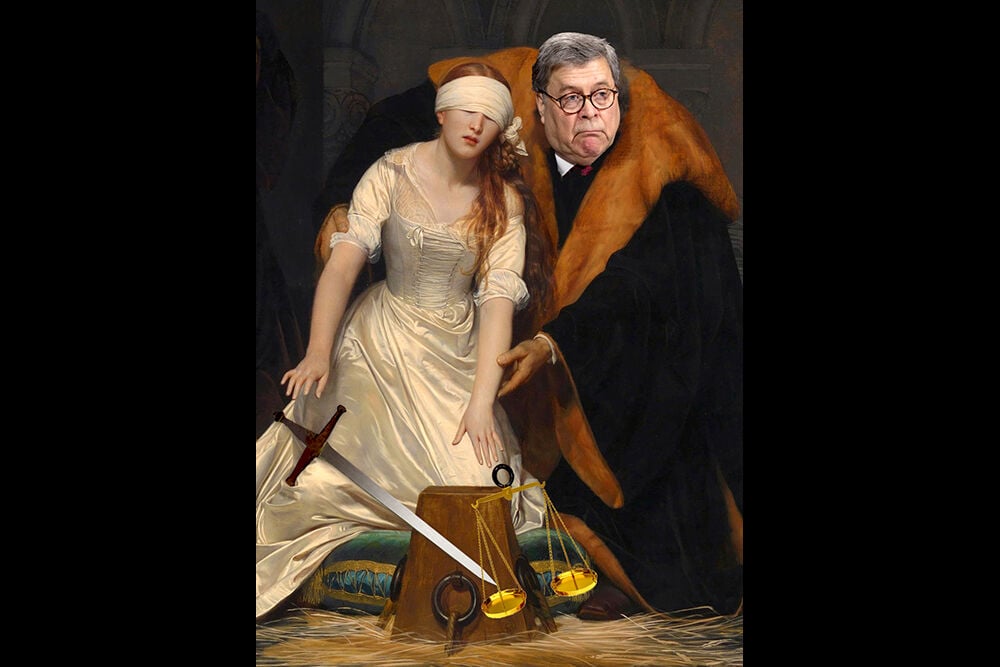 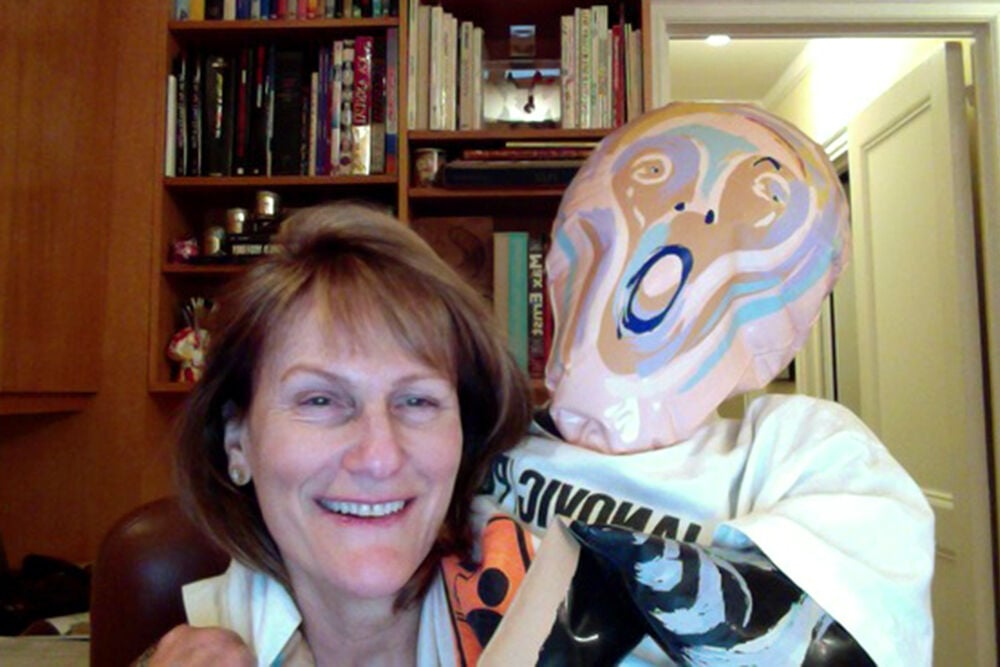 For many of us, the past 10 months since the pandemic began haven’t exactly been our most productive. But artist Cathy Hull, who grew up in Scarsdale, has bucked the trend. In addition to her usual work — crafting ingenious conceptual art for editorial, advertising, corporate and institutional organizations — she published two books of art-based political satire in the span of several months.

Perhaps it’s her cozy, countrified surroundings that have fueled this burst of creativity: last March, Hull fled New York City with her husband and black Labrador for the relative safety of their weekend home in Carmel, New York.

“Here we are, with no plans to return until there’s some sense of normalcy,” she said. “I sit on a couch with the laptop in my lap, or I sit at the dining table with my husband across from me and my dog at my feet.”

Her love of simplicity notwithstanding, Hull boasts an enviable network of clients that span the globe — her art has appeared everywhere from Israel to Japan, not to mention in some of America’s best-known publications. In addition, she is listed in authoritative compendia such as “Who’s Who in American Art,” and her illustrations are in the permanent collections of several museums both in the U.S. and abroad.

Passion is at the heart of any distinguished career, and Hull, who graduated from Scarsdale High School in 1964, says her passion for art was discovered and nurtured as a child in the Scarsdale school system.

“My fourth grade art teacher, Robert Dale, and [junior high school art teacher] Samuel Mogavero believed in me and my work,” she recalled. “I will be forever indebted to them for the inspiration, appreciation and encouragement.

Hull, whose parents had fled Nazi Germany, remembered her early years in Fox Meadow with fondness. However, she said, “It was tough in the sense of being first generation. When everybody got their third Porsche, I got my first bike. My parents didn’t adopt the customs of other parents. They had strict rules, which at the time I can’t say I appreciated, but now I do. I will say, I was able to get everything through my friends … when I couldn’t get it at home, I was invited to my best friend’s house, where anything went!”

Following her high school years (during which she crafted illustrations for classmates’ student officer campaigns as well as for the Bandersnatch yearbook), Hull continued on to Connecticut College, where she double-majored in art and art history.

“I wanted a liberal arts education, but I didn’t want to forget my art,” she said. “I wanted both. I wanted it all.”

She pursued graduate studies in Manhattan at the School of Visual Arts, where she spent two eye-opening years. “I remember having a third-degree burn on my hand and people would go grab their camera and say ‘Ooh, aah!’” she said, laughing. “They were so professional — they would do projects that looked like something you would purchase. The visual arts were a whole new learning experience.”

It was there that Hull first began working as a professional herself. When a teacher hooked her up with a freelance job designing a chapter of a college textbook on computers, “One chapter led to the whole book — 21 chapters and the cover,” she said.

“And while I was still a student at SVA, we won the Fifty Best Books of the Year Award from McGraw Hill. I thought, ‘Oh my God, what do I do now?’ It was amazing.”

“There was no path — you either made it or you didn’t,” she recalled. “The early success scared me. Yes [I was successful], but never to my satisfaction. You know, you’re only as good as your next job, not your last.”

Yet the next gig always seemed to pop up. “I did op-eds for the Times. I did the first cover illustration for the Home section, and worked on the Business section. Some of [my work] won awards, either because I submitted it or because the art director did,” she said. Determined to pay forward all she had learned, she returned to the School of Visual Arts in 2000 as a teacher. She spent 11 years instructing students there before serving as a teacher at Parsons School of Design for an additional four years.

As her mother’s health began to decline, Hull decided to focus on caregiving rather than work.

“I kind of felt like, ‘Oh my God, I’m ending my career,’” she said, “but it continued. And then, you know, more recently I’ve gotten assignments that were like what I got in the beginning, [needing to be completed] in three hours to overnight. And I said, ‘Oh my God, I don’t want to do this anymore.’”

Instead, last year she turned her attention to creating two books of political satire, “Art 101 of the Deal: Donald J. Trump Off the Wall” and “Art 2.0 of the Deal: Donald J. Trump Hits the Wall” (available through Amazon, Barnes & Noble and certain other major booksellers). Illustrated with inspiration drawn from the masters, such as Michelangelo and da Vinci, the books not only lampoon the former president but other prominent political figures such as Vladimir Putin and Nancy Pelosi. Witty commentary adds to the acerbic wit. “I laughed and cried and screamed out loud,” says one review on the booklovers’ website Goodreads.com.

Does Hull, who counts Magritte and Dali among her idols, see herself writing a book about anyone else in the future? She doesn’t hesitate to answer.

“Biden — the new one!” she exclaimed. “I’m working on it today. I drank the Kool-Aid, what can I tell you?” Which is good news for those still sitting out the pandemic with a good book: Hull’s many fans can buckle up for more hilarity to come.