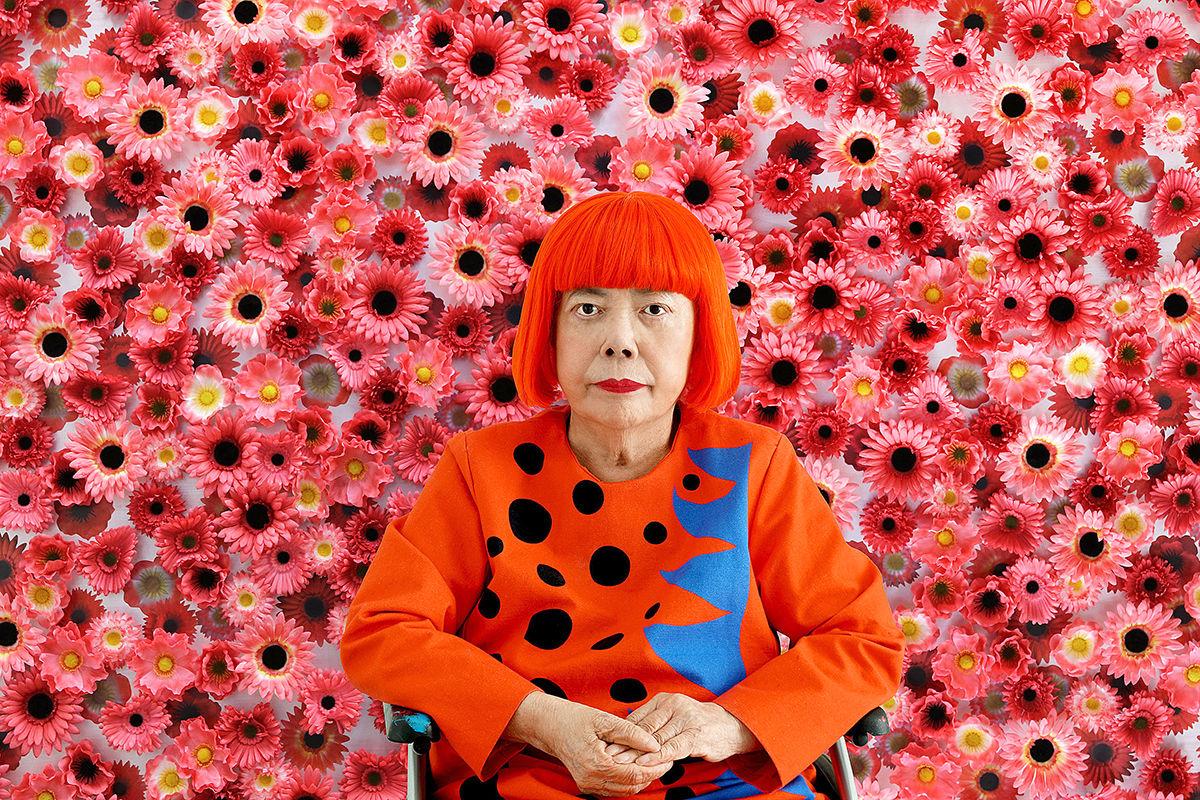 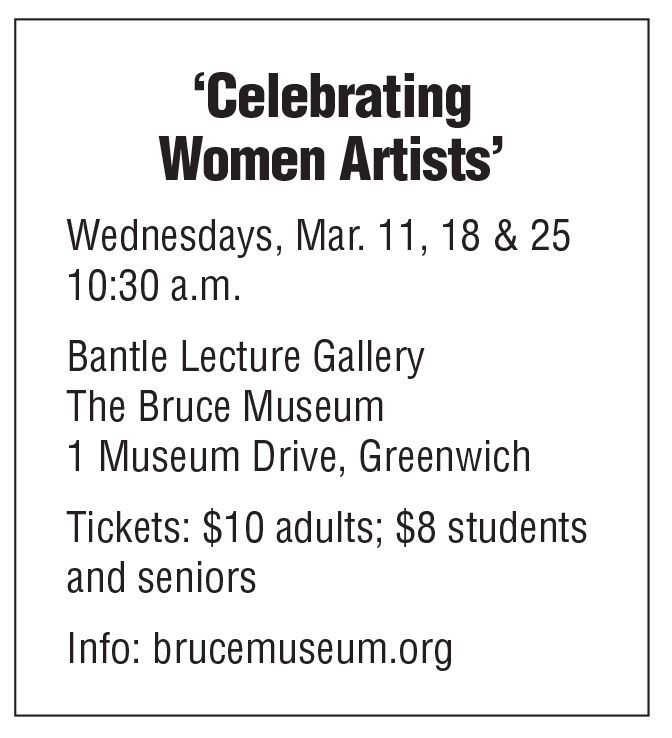 Art. Science. While generally thought of as separate, some might even say opposing disciplines, others refute this dichotomy to point out that both stem from a common quest: to discover ways to improve the human condition.

Einstein was reported to have said, “The greatest scientists are artists as well.”

Beethoven was likewise quoted to say, “Only art and science make us suspect the existence of life to a higher level and maybe also instill hope thereof.”

The mission of the Bruce Museum in Greenwich — currently undergoing a $60 million capital expansion — has always been to deepen and enrich the understanding of and appreciation for the intersection of art and science.

In concert with this vision, the Bruce is recognizing Women’s History Month, observed in March since 1987, by hosting a film series titled “Celebrating Women Artists.” The series showcases four remarkable women artists and architects. The lives of each one featured has been touched, and touches others, in some manner through both art and science.

The event was organized and curated by H.S. Miller, the Bruce’s Zvi Grunberg resident fellow. The nine-month to yearlong position inaugurated in 2012 “has enabled an emerging scholar to work with curators and educators in researching and developing all aspects of art exhibitions and related programs,” according to Scott Smith, director of marketing and communications at the Bruce. Miller’s tenure began in September.

A 2012 graduate of Darien High School in Connecticut, Miller double-majored in chemistry and religion at Bowdoin College in Maine and then went on to receive two masters’ degrees, one in art in the global Middle Ages and another in science and religion, both from the University of Edinburgh in Scotland.

“I see museums as ways that art and science connect,” Miller said, noting the Bruce’s effort to “show the connections” and that “there is a beauty to science and a science to artistic creations.”

“I’ve always been interested in exploring stories that get lost out of the main narrative,” Miller said. While the Bruce has had film series depicting periods of art (impressionist, post-impressionist), Miller wanted to feature a program highlighting “women and their stories.”

How were the artists chosen? Miller sought “to make sure a wide variety of cultures and artistic media were included.”

“Women artists have been under-represented, particularly in museum spaces,” said Lio. Also, notably, the four women “explore the intersection of art and science as is the mission of the Bruce Museum.”

The films are intended to appeal to a wide range of ages and interests.

“We want to educate and inspire all. We’d love to inspire the next generation of artists and scientists … Museums by their very nature are educational spaces. Any way we can engage people with the arts and science we want to encourage,” said Lio.

The films are being shown Wednesday mornings at 10:30 a.m. in the museum’s Bantle Lecture Gallery.

The debut film, “The Life and Times of Frida Kahlo,” shown on March 4, delved into the story of the Mexican painter, a 20th century icon who became, according to the museum’s press release, “an international sensation in the worlds of modern art and radical politics.” The film was made by Amy Stechler of Daylight Films and narrated by Rita Moreno.

On March 11, “Arc of Light: A Portrait of Anna Campbell Bliss” will trace the evolution of Bliss whose work fuses architecture, mathematics, computer technology, painting, printmaking and calligraphy.

Bliss was known for her multidisciplinary approach. Her obituary in the Salt Lake Tribune said, “Anna has contributed much to the international art community; an inspiration to both the mathematician and artist alike through the beauty and order she has found in our world.” In another tribute, the Tribune called her “an acclaimed artist and architect who combined color and line, science and technology and movement and the human form into her many works.”

The film examines many aspects of her life and the influences on her work including her links to the Bauhaus school of Germany in the 1920s and such exponents as Gropius and her connections to R. Buckminster Fuller.

On March 18, the work of Iraqi-British architect Zaha Hadid will be explored in two films.

“Zaha: An Architectural Legacy,” produced by Laura Mark and filmed by Jim Stephenson for Architects’ Journal, chronicles Hadid’s journey that began with drawings and paintings, then progressed to her designs of buildings, including MAXXI in Rome and the London Aquatics Centre. She is the first woman to win the Pritzker Architecture Prize and the first woman awarded the Royal Gold Medal from the Royal Institute of British Architects.

Miller said that “architecture is inherently a discipline where science and art come together,” adding that they were especially drawn to Hadid due to her design of the Phaeno Science Center, a spaceship-like structure near Wolfsburg, Germany.

The second film showing on March 18 examines this structure in “Phaeno, Building as Landscape.” The documentary about Hadid’s groundbreaking design was directed by Richard Copans in 2007 as part of the series “Architectures-Achievements in Modern Architecture.” The film notes that the museum is built on large cone bases housing a reception area, café and gift shop. The main exhibition hall contains 250 scientific experiments providing learning and amusement for all ages.

The final film of the series, “Kusama Infinity: The Life and Times of Yayoi Kusama,” directed, written and produced by Heather Lenz, will be shown on March 25.

Miller said that Kusama is “the most famous living woman artist” and called the documentary “a fascinating story.”

In the series’ publicity, the Bruce described Kusama as “the top-selling female artist in the world” and noted that “her Infinity Mirrored Room installations sell out globally and she generates new work every day.”

As a child, Kusama lived in Japan during World War II. She has lived voluntarily in a psychiatric hospital for much of her life and said in a 2018 interview in The Guardian that her living arrangement “made it possible for me to continue to make art every day and this has saved my life.”

The New York Botanical Garden will host “Kusama: Cosmic Nature” from May through November, featuring the artist’s work throughout the 250-acre grounds.

“Visitors might be familiar with the art or architecture,” Miller said, “but here they’ll be exposed to something about [the artists’ and architects’] life story they didn’t know before.”

Miller expressed hope that viewers might leave the series’ films wishing to continue to explore more about the creations and the lives of four unique women who have clearly elevated the human spirit through their work.