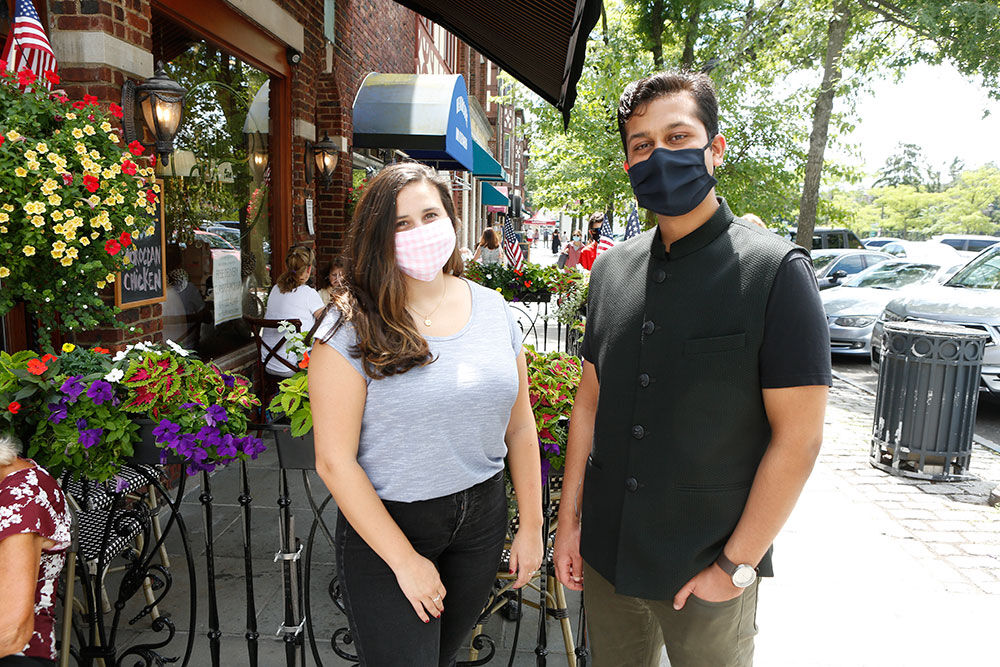 2011 Edgemont graduates Barrie Tovar and Tej Mehta were at the Scarsdale sidewalk sale as they prepare to offer help to local small businesses. 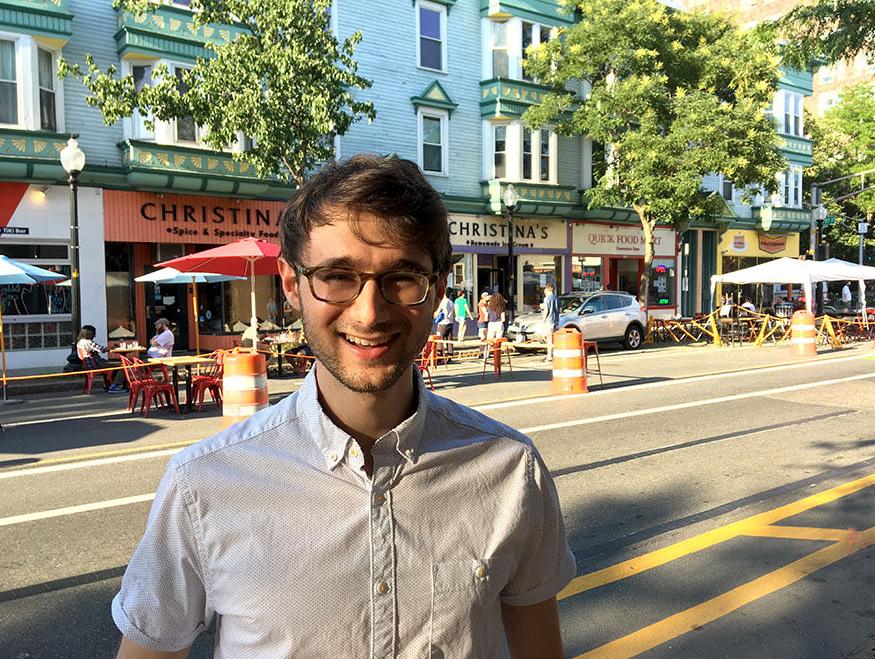 Small businesses are near and dear for 2011 Edgemont graduates Tej Mehta, Mitchell Breitbart and Barrie Tovar. That appreciation came from growing up supporting local shops throughout Scarsdale, Edgemont and Hartsdale.

The trio of friends have teamed up with others throughout the country to form Main Street Relief, a volunteer-based nonprofit that offers free guidance to small business owners who otherwise don’t have the resources to maneuver the challenging landscape of COVID-19 and beyond.

Businesses can sign up via mainstreetrelief.com and will soon be connected with an expert who can help with their primary needs to get started. The volunteers are trained and Mehta makes sure they feel comfortable prior to talking to any business. Then it’s about an hourlong conversation to get the business headed in the right direction. Some volunteers will follow up and send more information and if another consultation is needed in another area, that phone call can be arranged.

“We’ve had about 20 completed matches so far with six pending in terms of they have been matched and are having the conversations, but we’re kicking off a bigger marketing and partnership campaign over the coming weeks to bump those numbers up,” Mehta said in an interview in late July.

While the main behind-the-scenes team has put in scores of hours from April to now, getting others to volunteer has been easy since it’s a short time commitment per business.

“People have other responsibilities and frankly the stresses of COVID alone are overwhelming, however, to give that one hour is so accessible, so reachable, that we’re finding volunteers aren’t worried,” Mehta said. “They know they can easily do this.”

The network has expanded to more than 100 volunteers nationwide.

“One of our goals was to make sure we weren’t going to let down any of these small businesses, so our first goal was to go out there and get a big team of volunteers,” Breitbart said. “We have the capacity at this point to do well over 50 businesses a week. We know we have the ability to help them out.”

Main Street Relief does not provide monetary support or in-depth business planning, but the tips and guidance they give have great value. The first business they helped was a bakery in Illinois.

“We mobilized really quickly, and I like to say that we built the bus as we were flying down the highway,” communications and public relations director Victoria Yu said. “With a bunch of other talented people we all just got together and asked what can we do quickly? We formed Main Street Relief and started recruiting volunteers. We were some of our very own first volunteers. Word spread really quickly.”

Co-founder Mehta was the catalyst for the all-volunteer project. Mehta graduated from Boston College in 2015 and got a job at Deloitte, initially working in New York City. He ran into immigration challenges with his H-1B visa — he moved to the United States from India in 2001 — and spent about 15 months working for Deloitte in Amsterdam before returning to the U.S. in early 2018. He now has his green card, but it was the time overseas that helped shape what Mehta is focused on today.

In Amsterdam Mehta began working closely with refugees to help them secure jobs they were qualified for, as opposed to doing work that was beneath their qualifications.

“I thought, hey, Deloitte does consulting work around diversity and inclusion; there’s a need, our clients are hiring, so why don’t we actually try to bring the world together and support these refugees in getting jobs and help companies meet their commitments to hiring refugees around the world?” Mehta said.

That led to a shift in Mehta’s focus professionally toward social impact strategy. When coronavirus hit, Mehta was tasked with helping Deloitte’s nonprofit clients navigate the situation. He immersed himself in things like the CARES Act, personal protection equipment and Economic Injury Disaster Loans.

“One of the big realizations I had in thinking about nonprofits is that nonprofits are going to struggle, but there’s another community that’s going to struggle — you can’t say more or less, but in a significant way — and that’s small businesses,” Mehta said. “They have such a limited support infrastructure or support network in this country in terms of there’s no big money foundations, no grants, no donations — they’re just individuals or groups or families that have been in this country for generations trying to just make it.”

Mehta’s dad was on the phone with his own large company’s lawyers for “hours every day trying to navigate through the different loans and packages.” If he had to do that, imagine the struggles of small businesses.

“I thought, what about the restaurant owners who don’t have access to any of this?” Mehta said. “How can we support them in taking the next step forward?”

A colleague connected Mehta with Michael Hole, who was going through a similar thought process in Texas helping his parents with their small business. Two days later the seeds started to grow as the two co-founders reached into their own networks to recruit help. Two major players Mehta contacted were Tovar and Breitbart, while Hole brought Yu to the mix. Within two weeks they had their initial website and within a month in early May an initial free consultation model.

“This wouldn’t work if people weren’t enjoying each other’s time,” Mehta said. “It’s volunteer work. You’re putting in extra hours and extra time that would only be possible if you actually want to be around each other and work with each other. We spent six, seven, eight hours on Zoom together on a Sunday when we were finalizing the site, which is insane, but it worked and that was the only way this was going to happen.”

The idea was to help empower small businesses as opposed to leaving many in a helpless state coming out of the shutdown.

“Let’s do something, let’s find a way to connect people like myself, like Mitchell, like Barrie with small business owners — not to take them through the whole journey, because we can’t be the experts here, but build awareness about what their options are and help point them in the right direction for the steps they can take,” Mehta said. “We can get them to step 1 and they can take it to step 10 from there.”

Tovar is a graphic designer, who worked on the website, logo and branding.

“For me I was feeling really kind of helpless,” she said. “Everyone is in their house. You can donate money, but you feel like there’s something else you can do. When Tej had this really great idea to directly impact people who have made all of our lives so much better — the small shops or restaurants we spent our entire childhood eating at — being able to directly help places like that made me feel like I was finally able to do something instead of just sitting and waiting.”

While Tovar doesn’t implement changes to websites or branding, she can help business owners move in that direction.

“I think a lot of graphic designers and art directors, if you talk to them, are just really passionate about the subject matter,” she said. “That goes for whatever industry you’re in. As long as they know they’re doing some good, people are willing to give.

“We’re not necessarily redesigning things for them, but we’re pointing them in the right direction for that. Maybe say this is an easy win if you change this little thing about your website. Little things can make a huge difference.”

Breitbart, the product manager for Simply Business in Boston, is the backend guru. His company provides insurance for microbusinesses mostly with one, two or three employees.

“Every day I’m trying to get into the mindset of those kinds of customers,” Breitbart said. “When Tej came to me and said we had this opportunity to help them, we had already seen at Simply Business that there was a downturn, that people had struggled, that they weren’t even looking for insurance because businesses were shutting down. At that point it was already 25%.

“Of course we’re busy with our day jobs, but we had time and this was one thing we could do besides give money. We have some skills and we figured we could put this together. We were so excited to be able to help.”

In working to connect others, the Edgemont connection was key.

“One of the benefits of going to Edgemont and being in an environment like Edgemont is the people that we grew up with,” Mehta said. “Barrie and I have been friends since we were kids. This wasn’t like a, ‘Let me find people from Edgemont who can do this stuff.’ I already knew so many people, so it was, ‘Who do I pick from?’ It was a no-brainer in terms of leveraging our community, our friends, the people we’ve known our whole lives in terms of who you want to pull in, people we trust, who we knew.”

Breitbart said the nonprofit is “nimble” and “agile” in staying up to date with the needs of and opportunities for small businesses to offer a “full suite of services.”

“We got this up as quickly as we possibly could to meet that immediate customer need, which was grants and loans and how do I get through this next two weeks?” he said. “Then from there we realized there’s a lot that’s going to have to happen in this recovery and it’s going to have to go well beyond that.”

With part of the initial idea being born locally, Mehta, Breitbart and Tovar want to have a large presence in their hometown.

“We really want to start getting in front of Scarsdale and Edgemont small businesses and we want to encourage them to sign up so we can help them,” Mehta said.