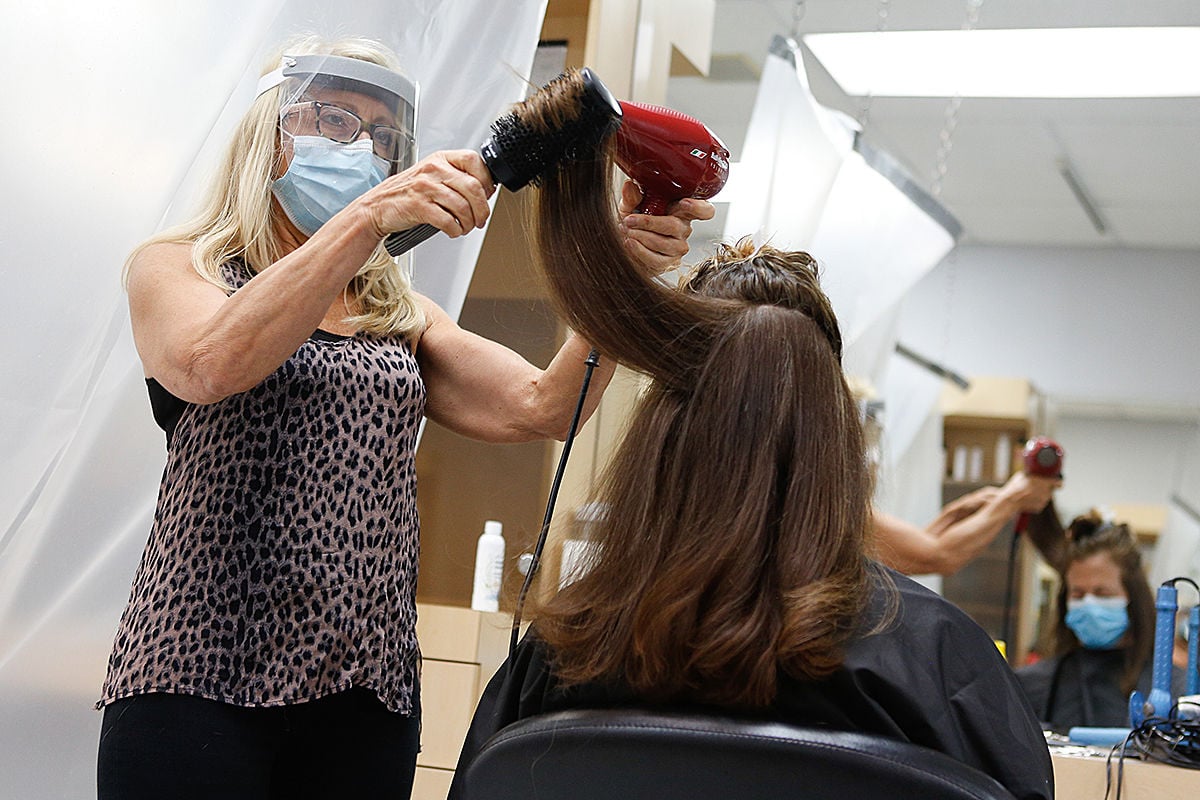 Leah's Salon in the Golden Horseshoe was open for business Tuesday. 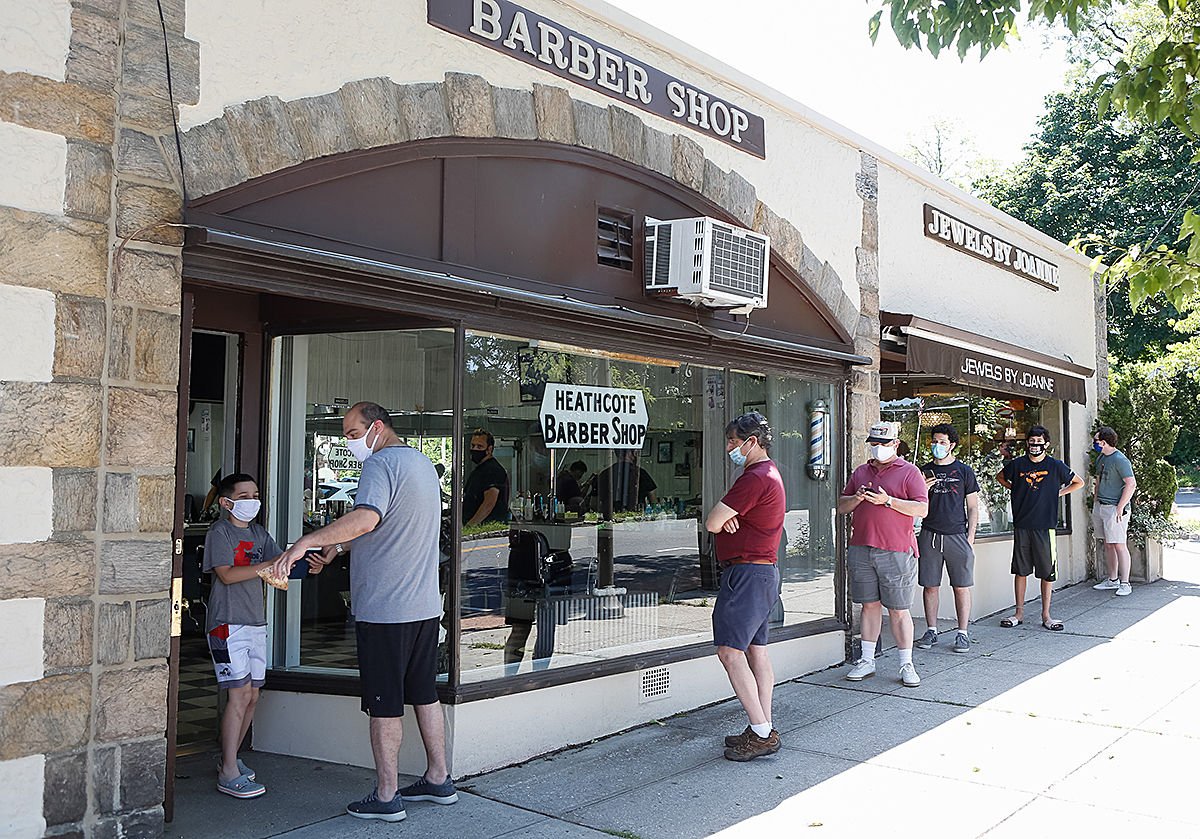 From boys to men, there was an eager group outside Heathcote Barber Shop on reopening day. 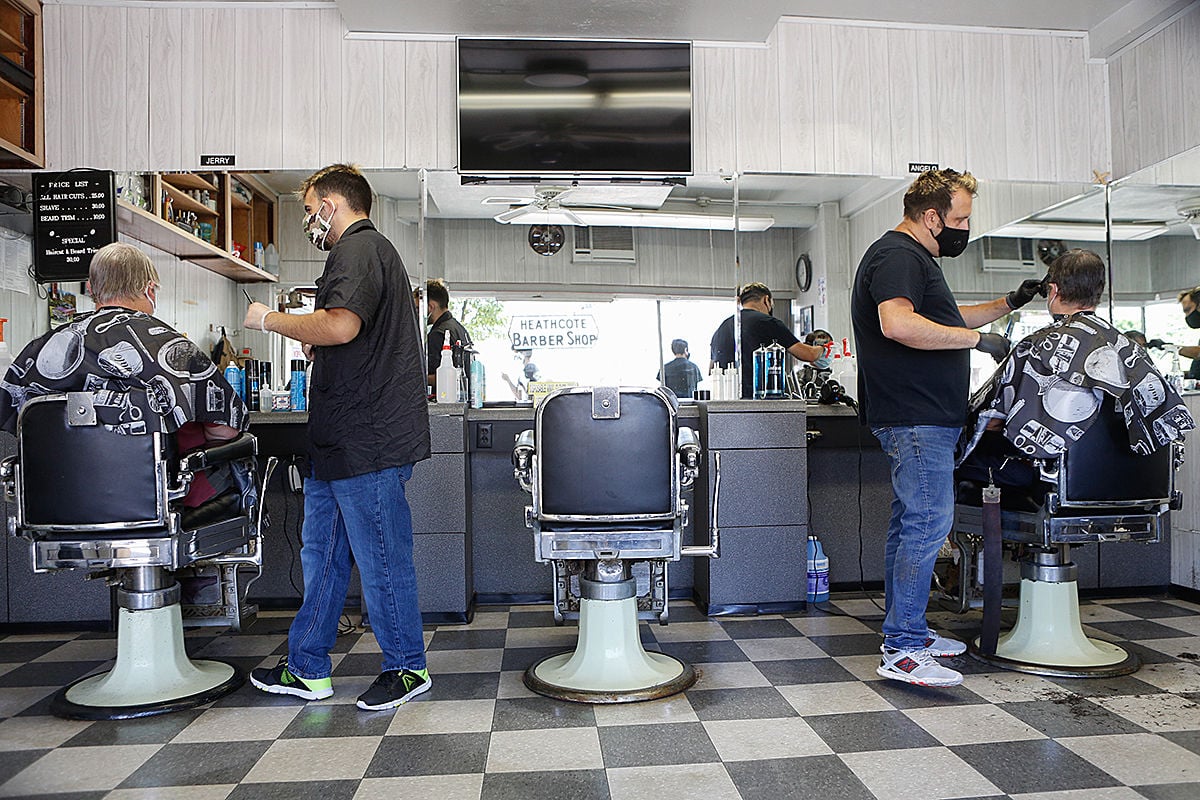 Social distancing was in full effect at Heathcote Barber Shop. 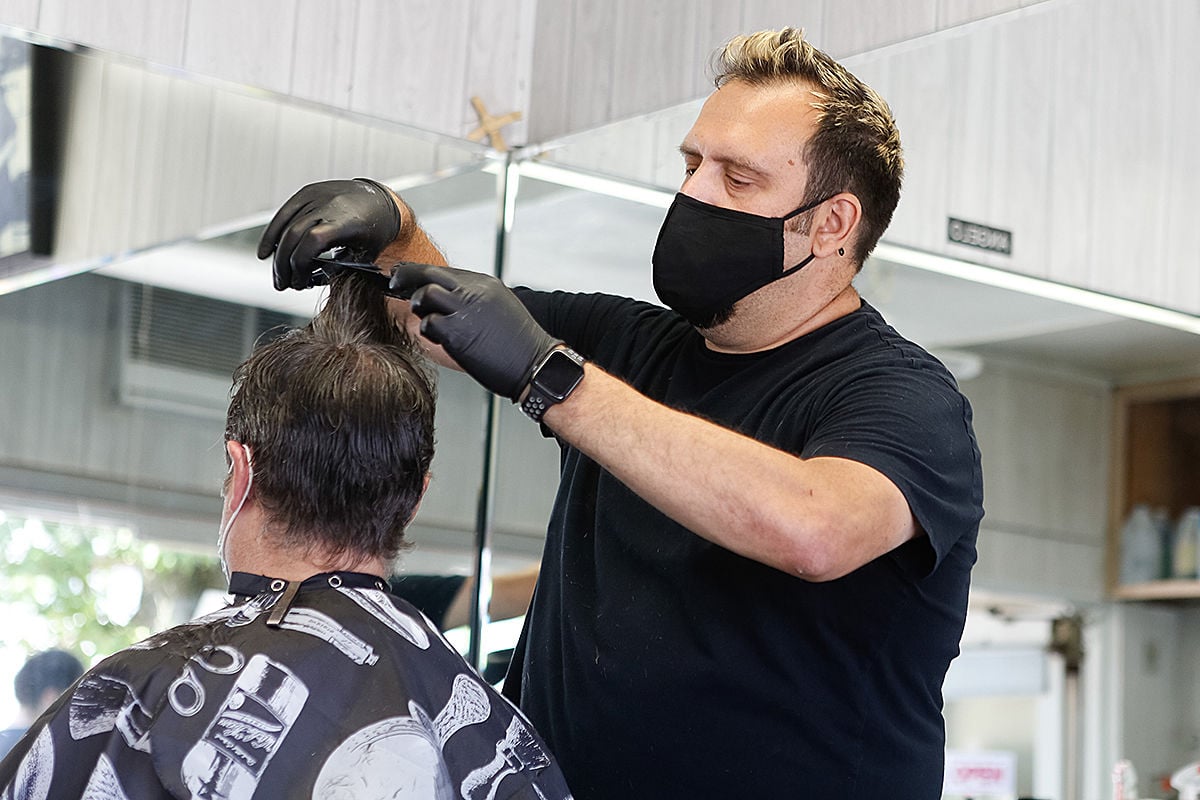 Heathcote Barber Shop was back in business Tuesday. 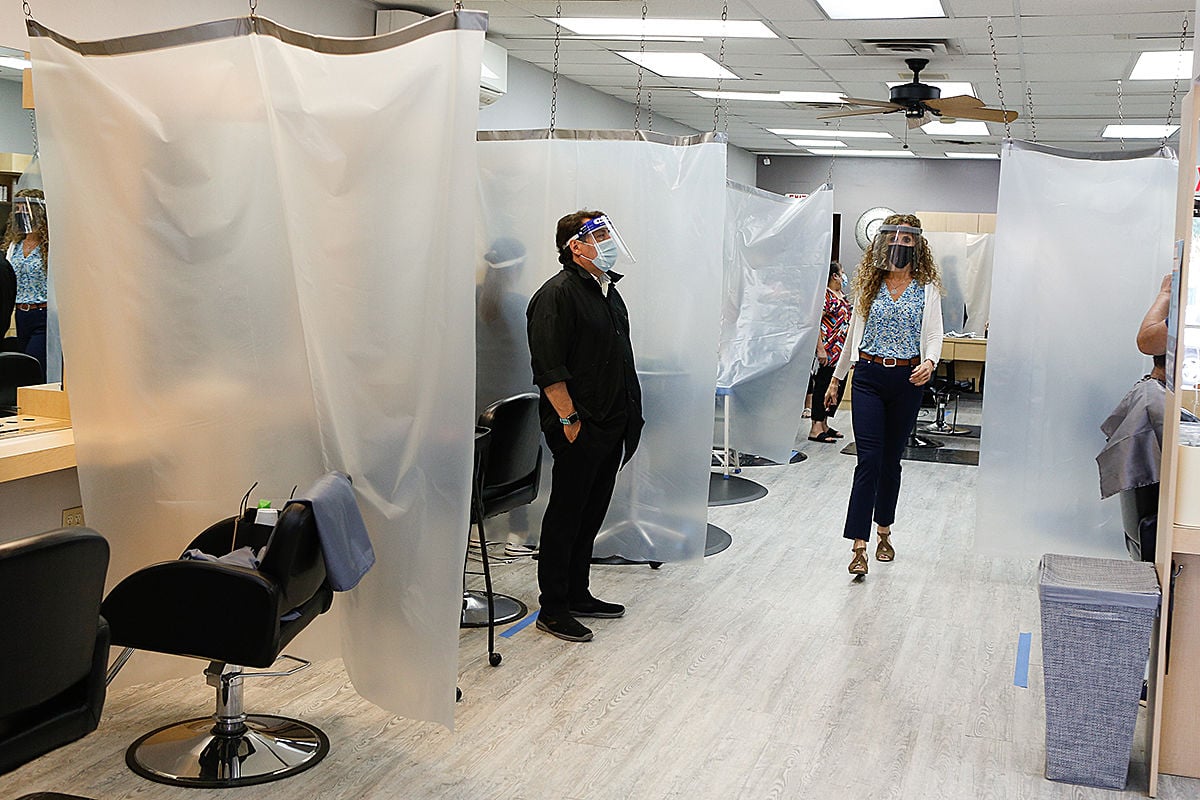 Curtains were placed between each styling station at Leah's Salon. 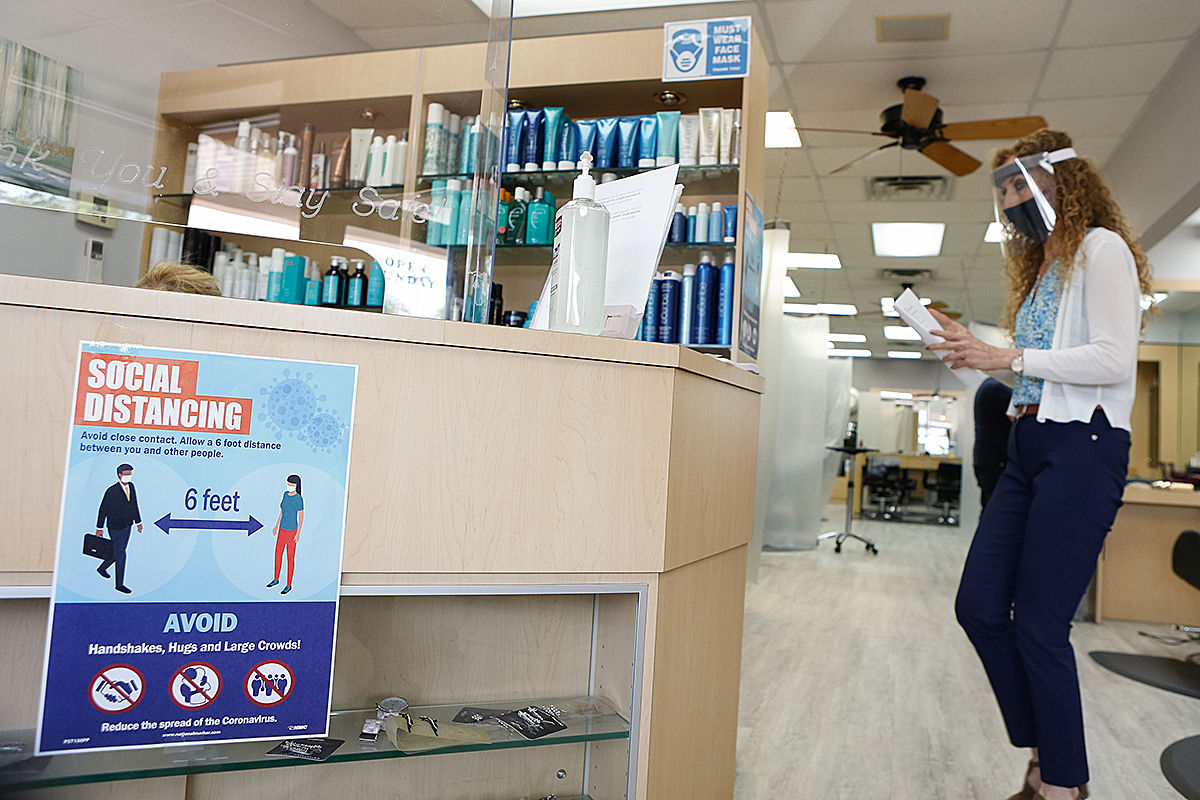 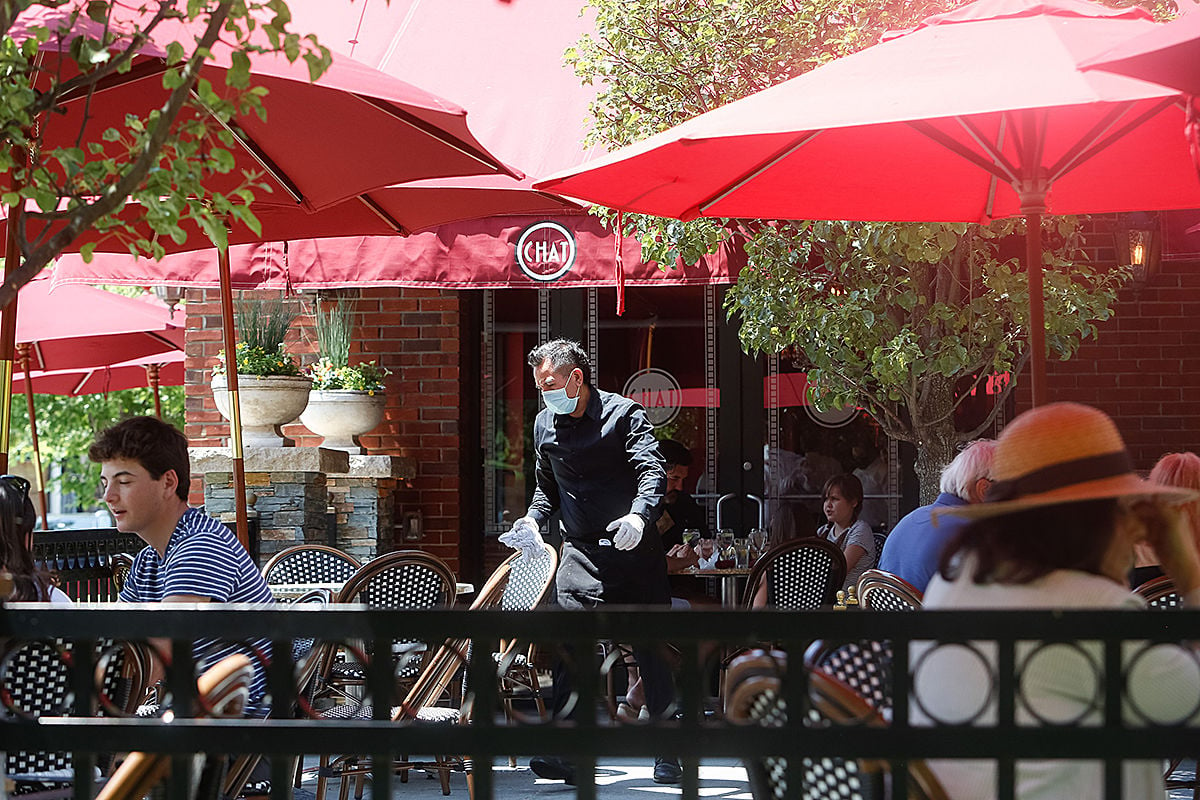 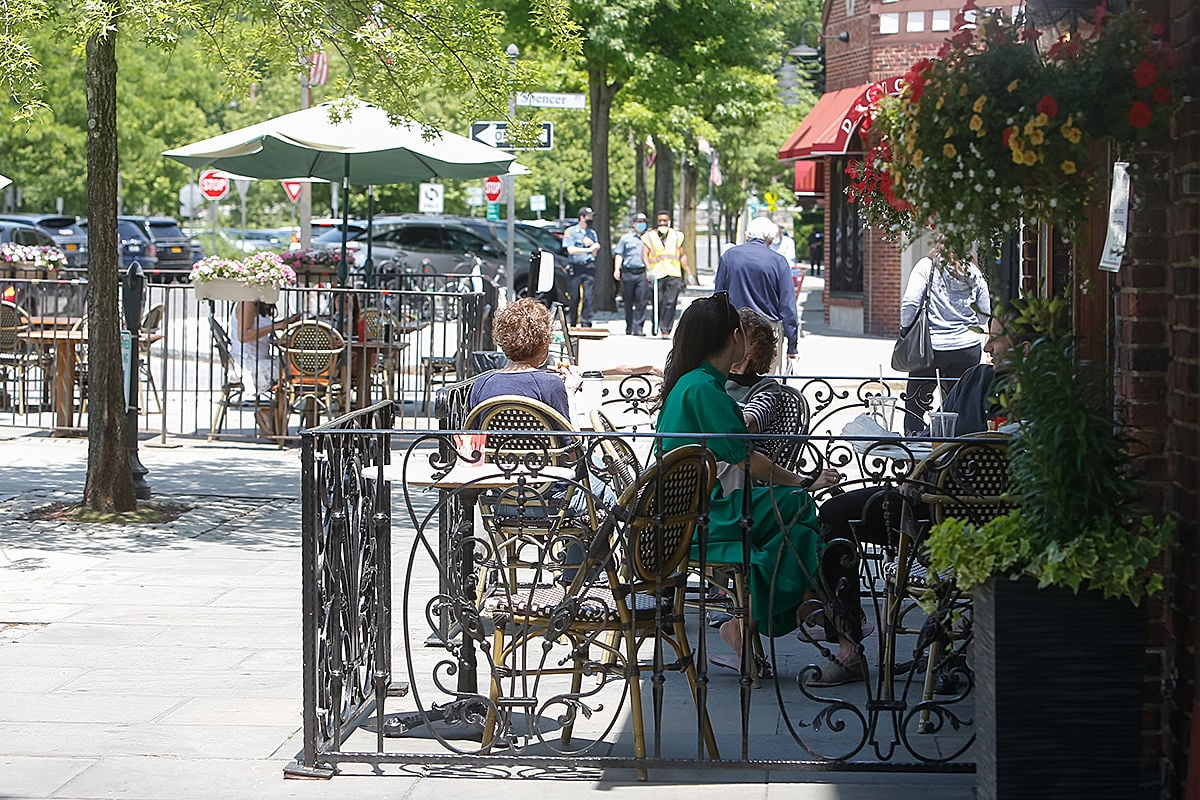 Martine's and Parkway's dining areas are once again popular places to hang out. 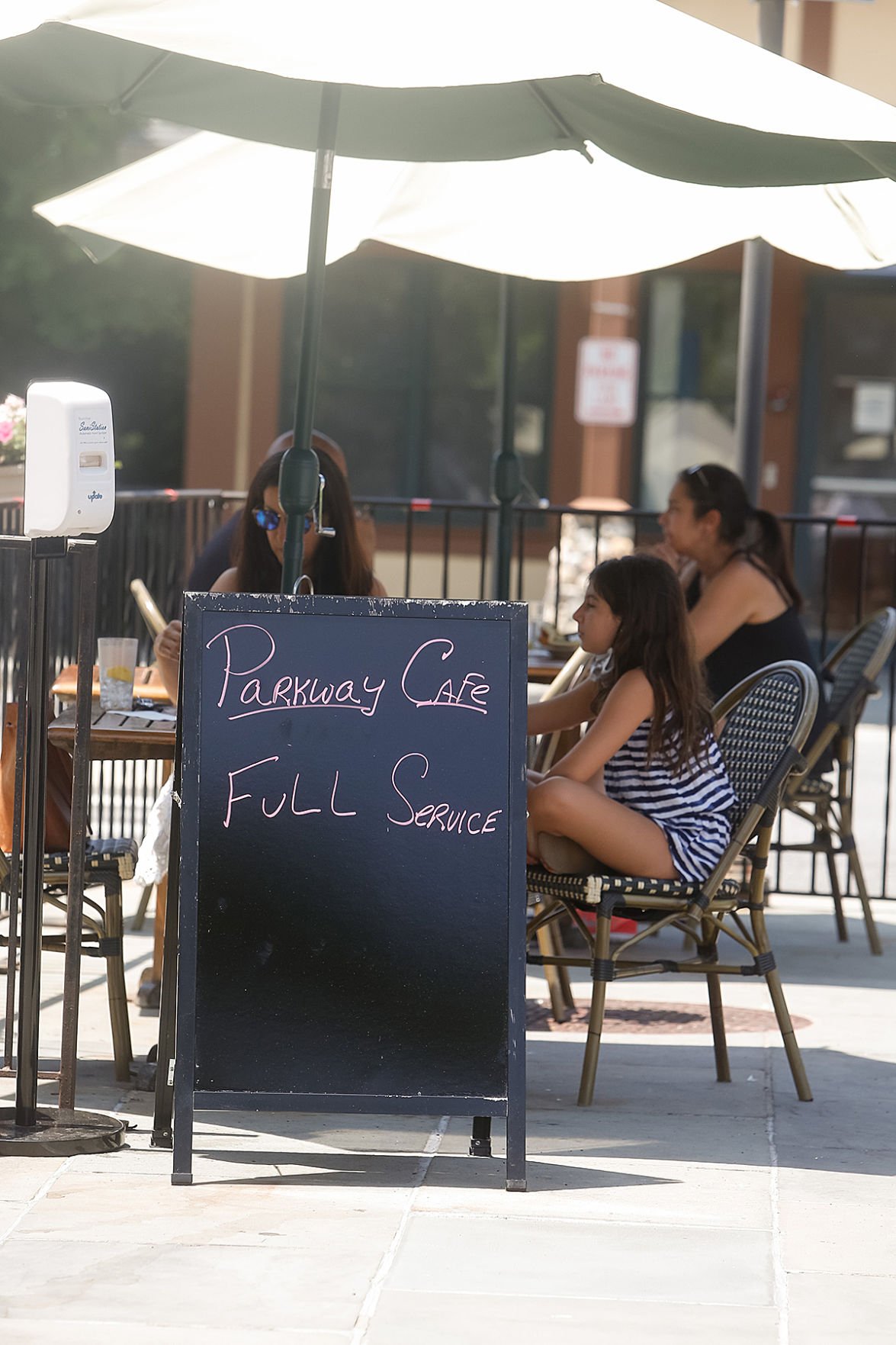 Leah's Salon in the Golden Horseshoe was open for business Tuesday.

Heathcote Barber Shop was back in business Tuesday.

For the first time since late March, Heathcote Barber Shop was buzzing on Tuesday morning. Literally.

There was a line of no fewer than six masked men and boys on the sidewalk outside the shop as Phase 2 of New York State’s reopening began in the Mid-Hudson Valley region. Among the eagerly awaited Phase 2 services opening up were hair salons/barber shops and outdoor dining at restaurants.

As Heathcote Barber Shop has four chairs for cuts in a small space, only two were being used in conjunction with social distancing restrictions. The two barbers were wearing masks and gloves and sanitized each station between cuts.

“You hope that things are starting to get back to normal now and you’ll be able to save some of the summer because I think everybody needs it,” customer Mike Singer said. “There’s only so much you can take of being cooped up in your house. The nice thing is in the neighborhood in the evening everybody’s out walking, riding bikes.”

Singer was in line early. The nearly lifelong Edgemont resident got his very first haircut at Heathcote Barber Shop about 27 years ago. His dad grew up in Scarsdale, so it’s a family tradition.

Not only is the barbershop generational for the clients, but the owners as well. “It’s funny because I got my first haircut from Jerry, who is Angelo’s father, who since retired, and Angelo has been my go-to guy ever since and today I think I’m going to get one from his son [Jerry] for the first time,” Singer said.

Singer had a cut just before the shutdown in mid-March, so he was pushing three months of growth. “It’s been a lot of wearing the hat, but I’ve enjoyed the long hair a little bit,” Singer said. “I’ve got the bald spot coming in up here a little. We thought about at some point having my wife cut my hair, but I saw how that worked out with my brother-in-law and I was not gonna take the risk.”

Down the street at Golden Horseshoe Shopping Center, Leah’s Salon had a different look to it, but it was at full capacity — which is now 50 percent of the old capacity — for the reopen. Owners Sandy Carino and Bill Giannalone closed off the waiting area — they are appointment only and they text you to come in when it’s your turn — and put up a protective shield at the desk and curtains between each styling chair.

And not only are they only able to see half as many people at once, but everything takes longer due to safety precautions and sanitizing stations between customers. “Forty-five minutes is now 90 minutes,” Giannalone said. “Everything is double.”

Carino was just happy to be up and running for the first time since March 21. After 18 years at Leah’s and 30 in the business overall, she was happy to see her co-workers and clients — “They’re family,” she said —even though it was different since there was no hugging and kissing and everyone was wearing masks.

“Most of the clients are good, though some are anxious,” Carino said. “Everyone seems to be happy and working. It’s just different, a slower pace.”

The major service was dealing with the “3-inch roots” of clients who hadn’t been there in a while or didn’t do any at-home self-services. “They wanted in yesterday,” Carino joked.

Laurie Silber normally heads to Leah’s twice a week for a blowout. She doesn’t get her hair cut often and she dyes her hair at home, but also goes to Leah’s so they can wash it out for her. During the shutdown she did learn how to blow her own hair out.

“I actually learned I can do my own hair when I have to in an emergency,” she said. “I had a special blow dryer with a round attachment and I was able to do my hair enough to survive the pandemic.”

But she was back on opening day and thrilled to see all the friendly faces back at work. “It felt really good,” Silber said. “I have very curly hair that’s hard to maintain, so I can’t do it myself. I like it straighter.”

Silber felt at ease going back out to the salon. “They were extremely careful in there,” she said. “They were really on the ball. Everyone should be taking it seriously. It is serious. Mentally people aren’t really sure what to believe any more because of the thousands of people gathering together. Everyone is still being careful.”

The bottom line for Silber: “It was good to be human again. You feel like a person.”

Around the corner from Heathcote Barbershop, Setsuko at Jean Claude had a very different approach. They are only seeing one client at a time despite a long row of stations.

Working the front desk, Josiane Fonseca said both employees and clients are required to have their temperature taken and if they are running a fever they can’t return for 14 days. There are shields, sanitizers and masks for protection.

Setsuko is also by appointment only and the time slots vary based on what each client wants as “color, cut and blow dry is two to three hours,” according to Fonseca.

“We are happy to be here, but we’re trying to adjust, just getting used to all of this,” Fonseca said. “Some people are still scared and they don’t want to come, but little by little I think things are going to go back not to normal, but it will get better.”

While restaurants were permitted to offer delivery and takeout during the shutdown, they are now in a new phase where they can add outdoor dining as long as the tables are spread 6 feet apart to keep diners socially distanced.

Once they are seated, customers are allowed to take their masks off, but the servers must remain covered.

“It’s hard to eat with a mask on,” Larry Vitale joked Tuesday morning while having breakfast at Parkway Café. “It’s a little awkward. I haven’t figured out how to eat with it on.”

It was warm, sunny and clear, a perfect time to grab a bite out for the first time in months. Vitale had been doing takeout and cooking on his own a lot — “My clam chowder has gotten pretty good,” he said — but he wanted to take the opportunity to have some bacon, eggs and tea with his book, newspapers and crossword puzzle served to him outdoors.

“I’ve missed this and it’s a start,” Vitale said. “I had to go out. You want to support these guys. That’s really important. And it’s a gorgeous day. It’s going to be too hot later on, so I wanted to enjoy the morning.”

Vitale isn’t sure what the future holds as far as the third and fourth phases and he is concerned with another outbreak ahead as the world rushes to reopen.

“The data point from the other day said it was the highest number of COVID cases we’ve seen so far, so I don’t know,” he said. “People want to be out. They’re sick of being cooped up. The weather is getting nicer, people have to go back to work. This may be it for a while. We may be looking at it.”

Chat American Grill has the largest outdoor patio in the village and also sets up tables on the sidewalk, in addition to its large indoor space. Indoor is currently empty of tables, the patio is down from 31 to 16 tables and the sidewalk has added seven more small tables going down toward the parking garage, but those are mostly tables for two.

Overall the 300 capacity restaurant is down to 80 and the staff is at less than half what it normally would be. “It’s going to be a slow process, but we do expect a busy week hopefully,” general manager Gregory Galli said. “We need it so bad.”

Being open for takeout the last few months just wasn’t the same for the usually hopping social destination.

“The parking lot was empty in the garage for three months,” Galli said. “The town was empty. We hope to see the parking a lot more full. Hopefully this town is going to go back to normal.”