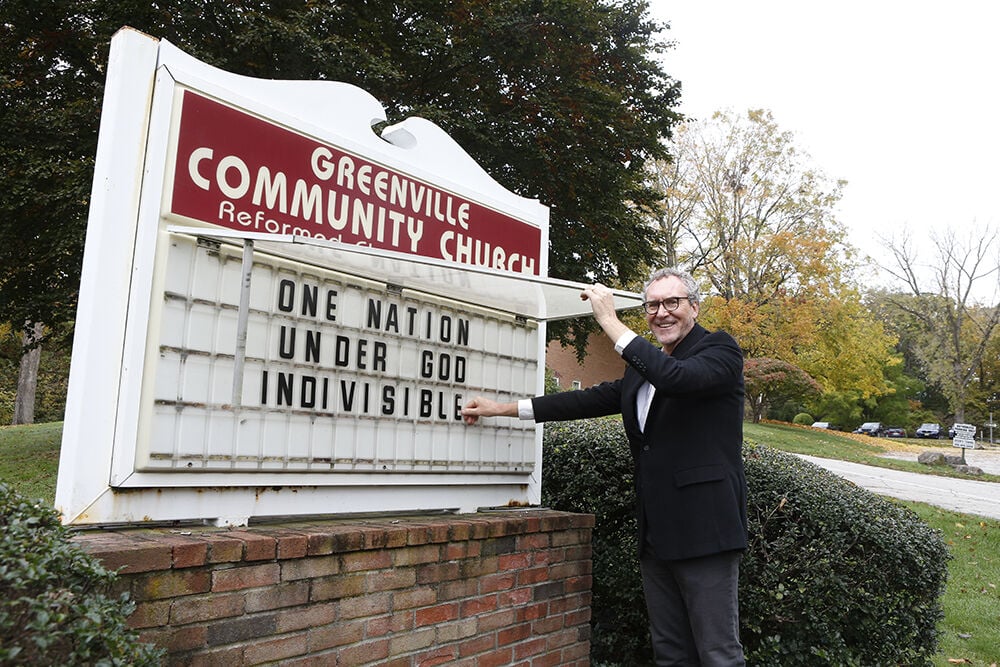 Rev. Edward Schreur has been creating unique signs at Greenville Church since 2009. 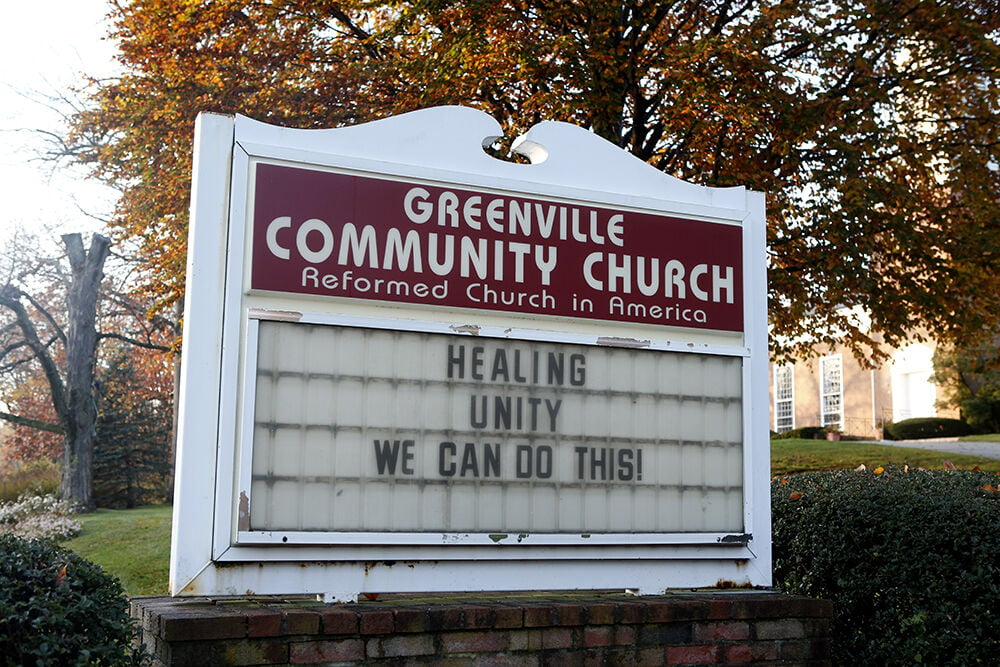 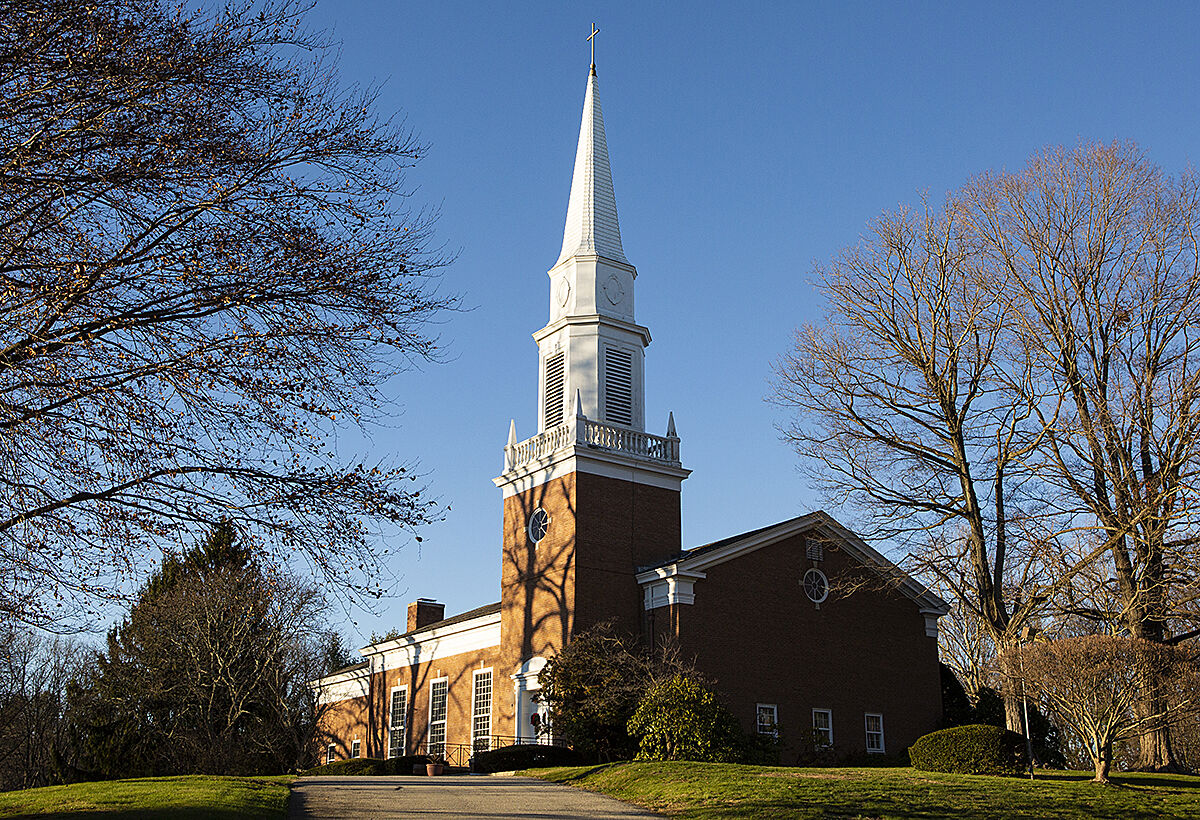 Dyan Atkins was church shopping. Though she was raised Catholic, she had stepped away from organized religion and stopped following much of the church’s dogma, rules and rituals. She wanted to find a church she connected with, so every Sunday she would make the rounds, testing out different churches and denominations. She went to five or six different places of worship, but none seemed to strike her fancy.

She was working at Sacred Heart University in Connecticut and in order to avoid the craziness of the highways when driving home, her neighbor showed her a different route which landed her on Ardsley Road in Edgemont. Along the way, she noticed a steeple; a bright, white, pointy structure jutting out just over the hill.

The steeple belonged to one of the oldest churches in Scarsdale: Greenville Community Church, a Dutch Reform denomination.

Her eyes gazed at the steeple for a moment and then she caught sight of a sign  in the yard along the roadway. A simple structure with four rows and up to 18 characters per line. It was like all the other signs set up in front of many churches, but this sign’s phrase struck her differently.

Though she can’t remember exactly what the sign said (it was something inspirational), she was drawn in and felt the need to attend a service. When she attended a 10 a.m. service at the church, she sat in the back row and almost immediately was welcomed by an amiable congregant.

She was finally feeling accepted at a place she knew she wanted to be.

“I needed to hear a message of grace because that’s the true following. When you’re following Jesus that’s the message; the gospel, the good news. That’s what I was looking for,” she said. “[The sign] was a draw. It was like ‘Wow, this is definitely a place I need to check out’ and of course it enticed me enough to get there and once I got there I never left.”

Metal marquee church signs are quite common. Whether they are displaying a notice for an upcoming church service or spreading a Bible-based message, the sign on Ardsley Road on the property of Greenville Community Church has become a staple sight in the community. Known for its quirky phrases and loosely political connotations, the sign has been a conversation starter in the area.

Though the church dates back to the 1840s, the sign next to the roadway is much newer. According to parishioner Joanne Fernandez, the Rev. John Elliott first proposed the idea for a sign after he joined the church in 1982. The idea was met with a bit of a debate from the community, who thought the sign could be seen as glitzy and ostentatious. Elliott eventually won the debate and the sign was installed, where he often reminded folks about upcoming services and showed celebrations for common holidays.

When Fernandez joined the church in 1993, she said some parishioners began feeding phrases for the sign to Elliott, and soon enough, clever quips made their way onto the board. Nothing offensive of course, but the sign always had a phrase or sentence that tried to make the passerby contemplate.

The reason the church puts messages up on the sign is “to make people think,” said Fernandez, who lives in Mount Vernon. “If somebody drives by and sees a ‘Happy Hanukkah’ sign or something like that and they realize it’s a Protestant church, they’re going to drive on by … and say ‘Wow, that church cares about all of us.’”

After Elliott retired and the Rev. Edward Schreur took over the church in 2009, the catchy phrases on the sign continued. Every week it’s a challenge for Schreur, who equates coming up with sign phrases to working on a New York Times puzzle.

“Current events [are] definitely the inspiration. I can’t say it comes easy to me always, although sometimes quickly,” he said. “I have to the make the decision [about] what goes up each week, even when I’m away and it’s hard for me to say what [phrase] goes over well.”

Every Tuesday Schreur must come up with a phrase for the sign so it can be put up on Wednesday by the church’s custodian. Sometimes the phrases on the sign can be politically based, like when Ruth Bader Ginsberg died in September and the sign read “RIP RBG” or when the sign had the phrase “Make America kind again,” a play on words from President Donald Trump’s “Make America Great Again” campaign slogan.

Parishioners disagree over whether the sign’s phrases could be deemed as political or not. For the RBG sign, for example, they took the words at face value  in honoring the former Supreme Court Justice and advocating for woman’s rights and calling for kindness through the country.

“[The sign] isn’t being political, but it’s trying to get down to something that’s very, very basic and core to who we are as people,” said Edgemont resident and parishioner Dotti Lee. “People will read what they want to read because they read everything through their own screen.”

During the November presidential election, Schreur put up the sign “One nation under God indivisible,” in hopes that passersby would get to the line of “indivisible” and see it as a challenge to rise to an occasion for unity.

Schreur said the goal for the sign’s phrases is to share the congregations’ values without offending. He wants passersby to know that life is joyful, everyone shares God’s image, the earth is a fabulous home, and some people need extra help.

“I’ve literally had people come into a Sunday morning activity and say, ‘I’ve been passing your signs for years, so I thought I should stop in and see what the people inside are like,’” said Schreur.

Everything on the sign is also based contextually, especially during religious holidays not celebrated by the congregation, where Schreur makes an effort to greet Muslims during Ramadan, Jews during Rosh Hashana and Hindus during Diwali.

“We value the belief that everybody in some way shares God’s image and that our unity is in diversity by design,” he said.

In her view, Atkins said, the sign could be the one thing a passerby, whether a parishioner or not, needs at that moment — a source of inspiration or motivation.

“You can be driving along that road and you might really be in need of something — and for me it was a need. Here I was on this quest to find a place that fit for me,” she said. “The message is key, because it may [bring] people what they need to hear just at that time.”