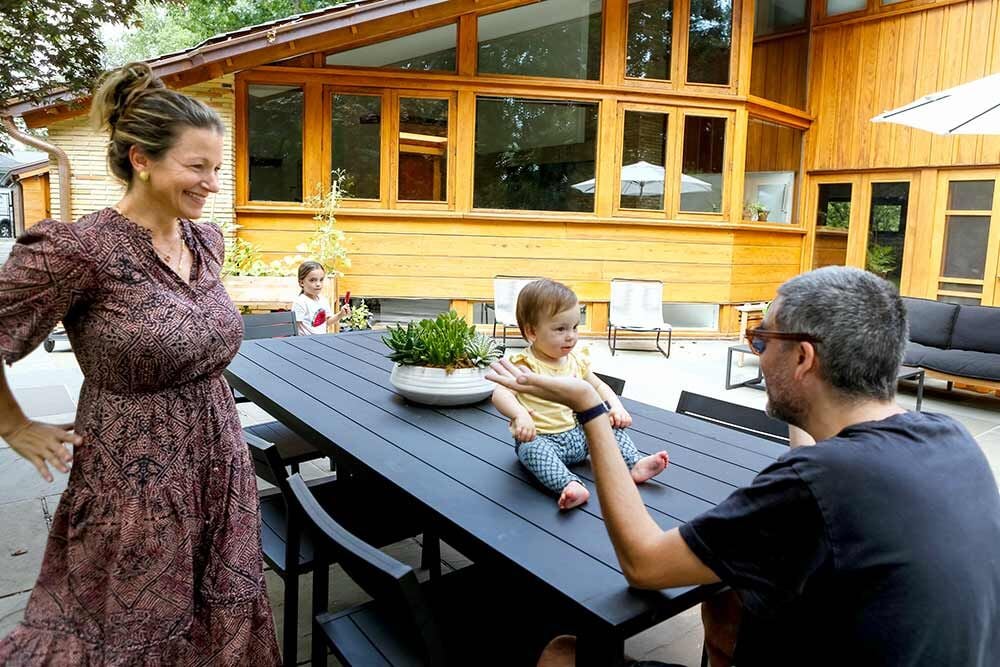 The Sokoloff/Kaiser family has been enjoying the outdoor space during the pandemic. 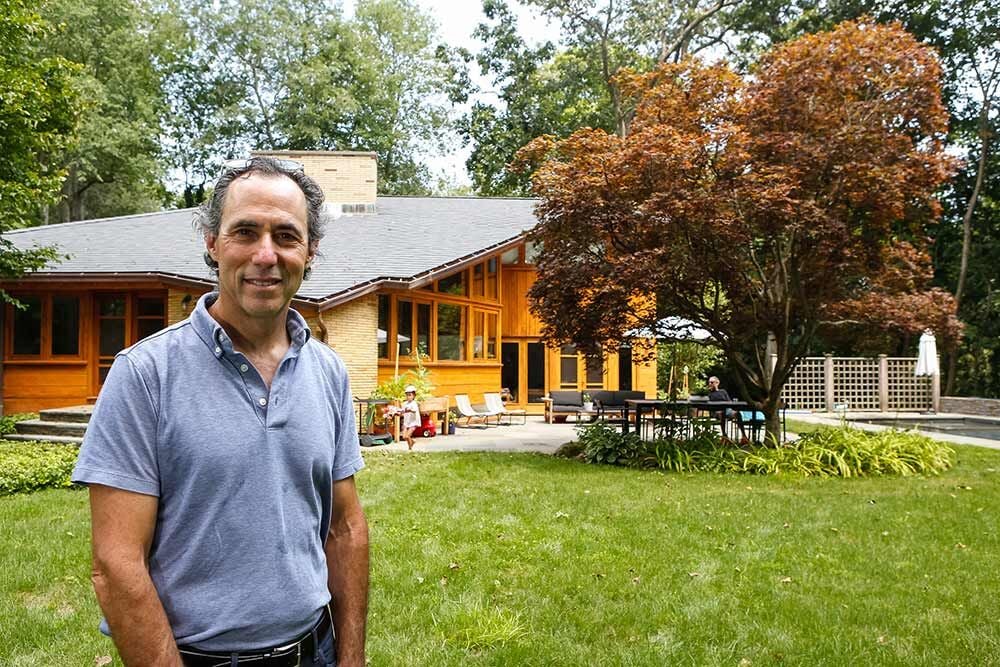 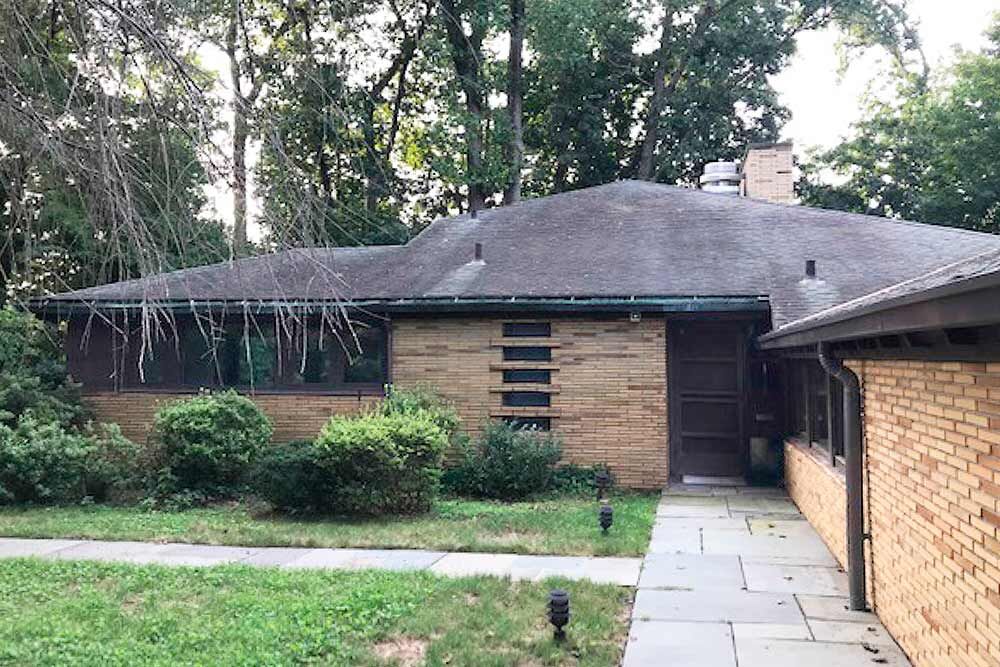 The exterior before the renovation... 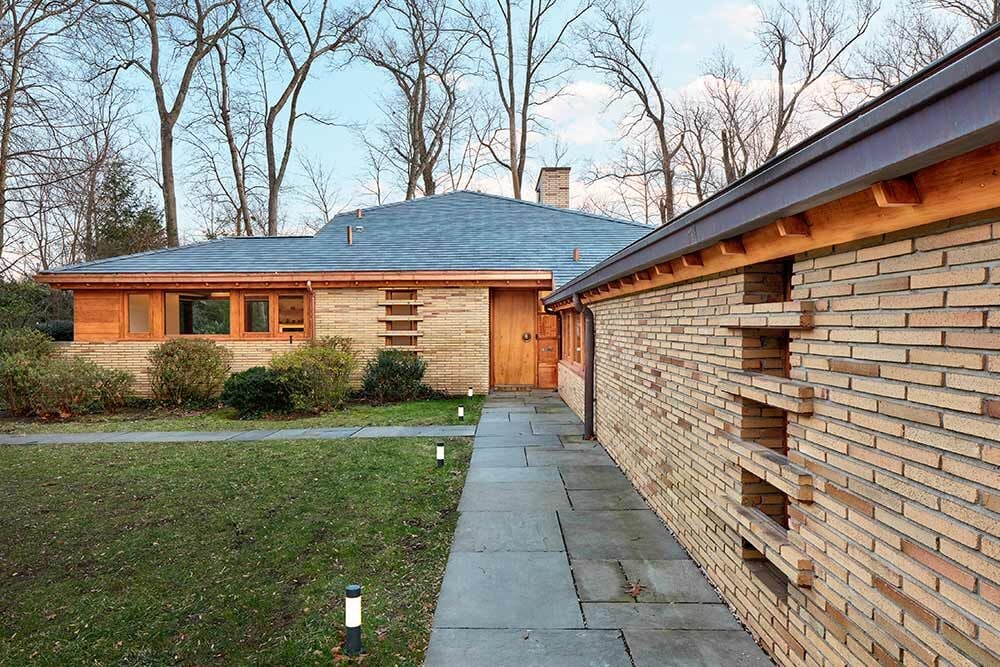 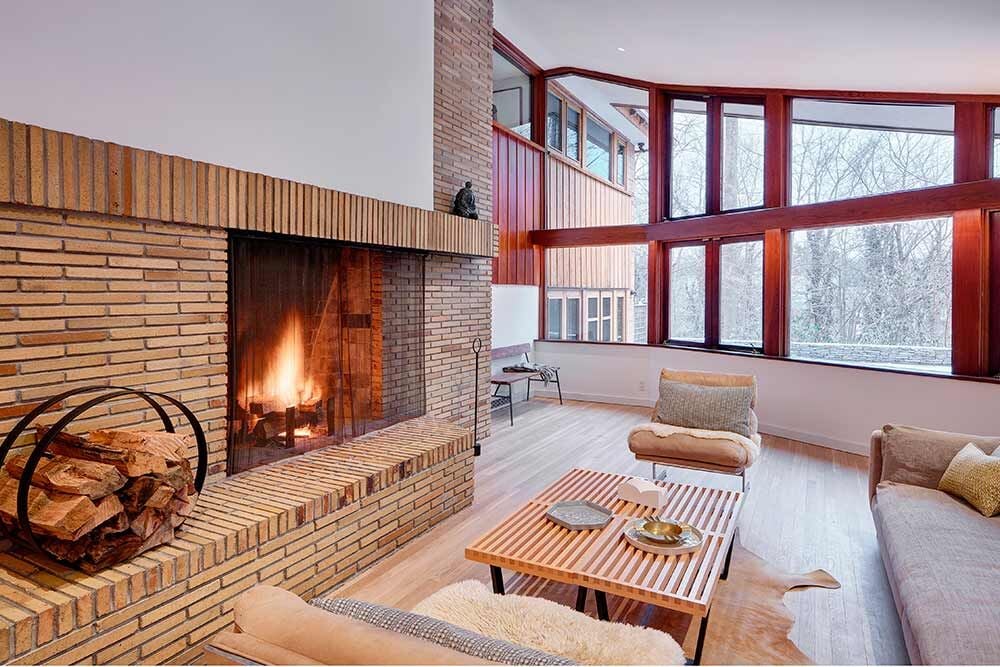 The living room with original fireplace and windows overlooking the yard. 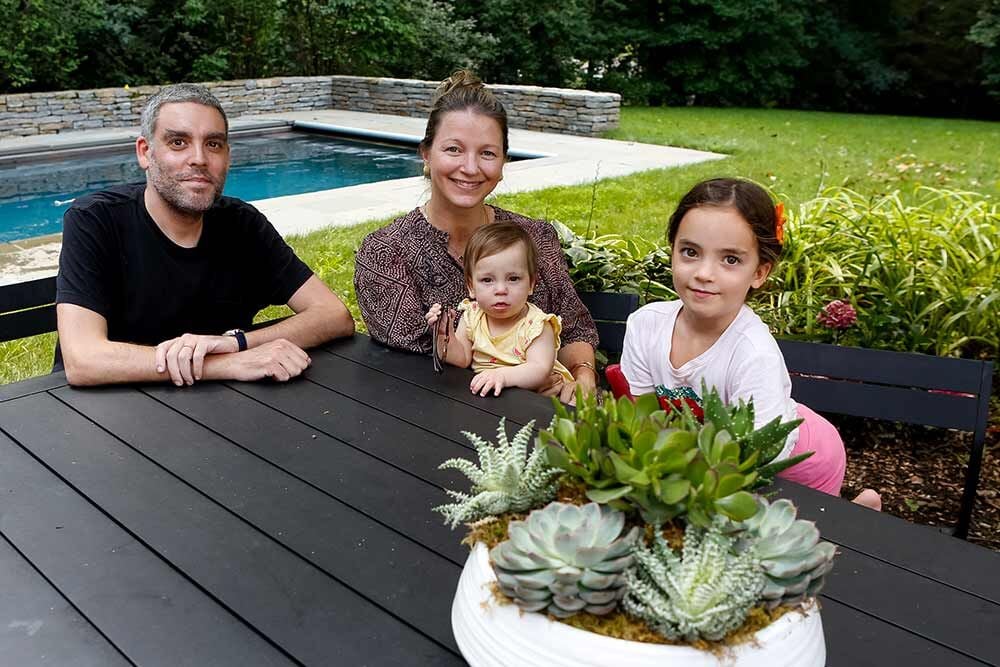 The Sokoloff/Kaiser family also has the pool to enjoy. 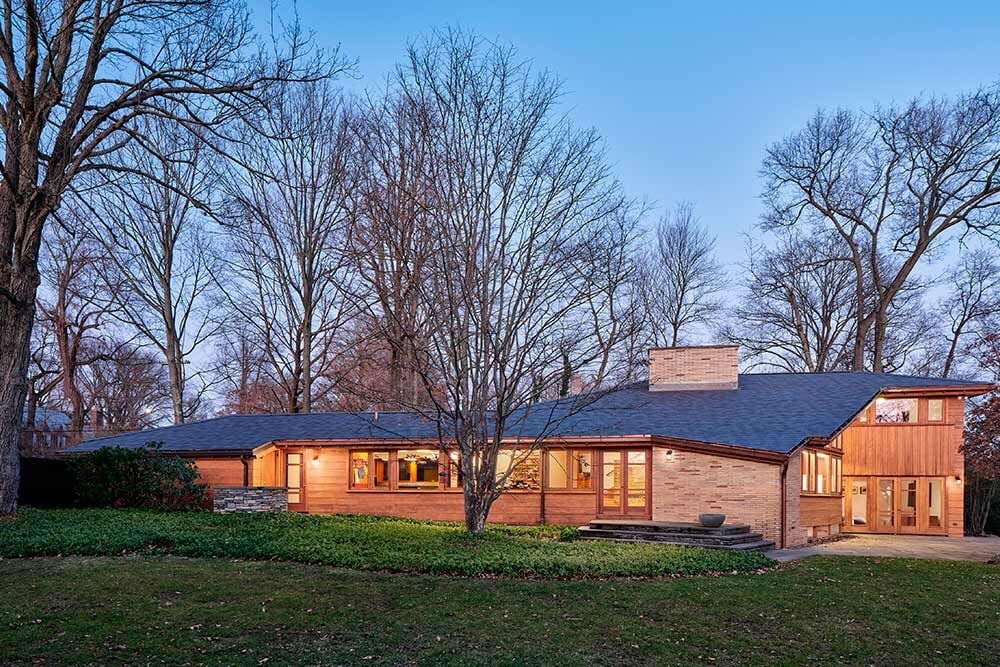 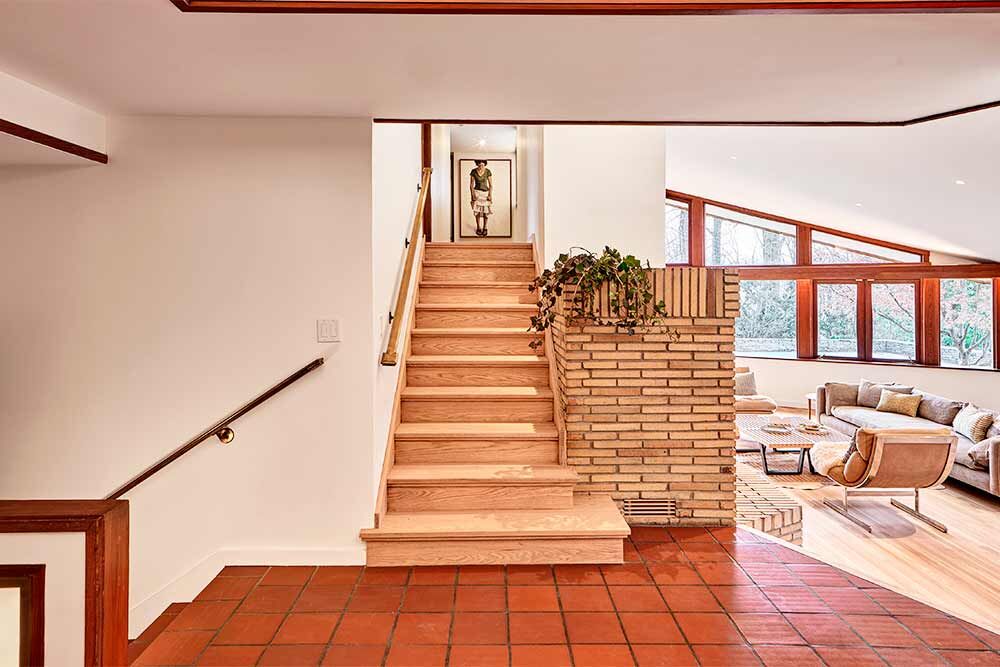 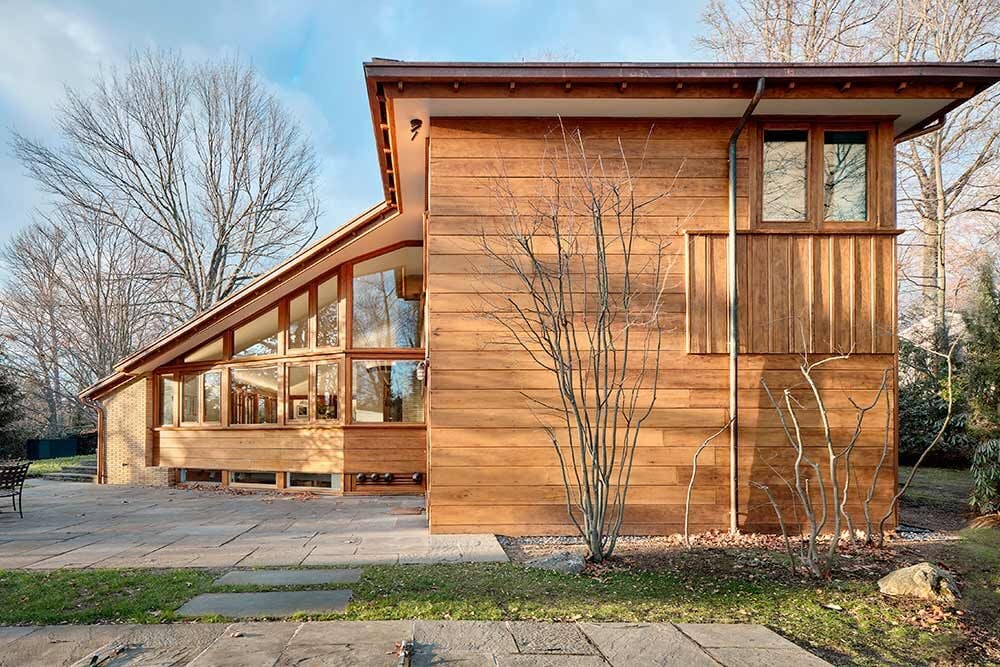 The south elevation of 8 Overlook Road.

The Sokoloff/Kaiser family has been enjoying the outdoor space during the pandemic.

The living room with original fireplace and windows overlooking the yard.

The south elevation of 8 Overlook Road.

“The minute he saw it he loved it,” Kaiser, a 1998 Scarsdale High School graduate, said. “He immediately appreciated the architectural beauty of it and the uniqueness of this home. Then we found out about the history.”

Built in 1950, the original architect was Edgar Tafel, who apprenticed under Frank Lloyd Wright at Taliesin from 1932 to 1941. The influence from Wright to Tafel is clear in the architecture with “the idea of horizontal planes that were jutting out into the landscape,” according to architect Stephen Moser.

“I just love the lineage from Frank Lloyd Wright to Tafel, the fact that we own and are enjoying and live in this piece of history,” Kaiser said. “It’s cool because it fit our style. All of our furniture from the city fit right in. We didn’t have to redefine our interior.”

According to Zillow, 8 Overlook sold for $2.75 million on Dec. 19, 2018 to Sokoloff and Kaiser. The house on a lot just under one acre in size had previously sold for $807,500 in 1996, then $2.56 million in 2015; and in May 2018 it sold for $2.97 million to buyers who intended to tear it down, but were denied permission to do so. That buyer and put the house back on the market in July 2018. With little competition due to the slowdown in the housing market after the federal government reduced deductibility of state and local taxes, Sokoloff and Kaiser took their time in deciding to purchase the house, which they planned to restore prior to moving in.

“There was a renovation that was done in the ’90s, where they did work on the kitchen and bathrooms, but [most of the house has] pretty much remained unchanged,” architect Stephen Moser said.

In 2012, the village of Scarsdale looked at historic structures and two mid-century houses were on the list. Eight Overlook was then owned by Richard Ottinger, a former congressman and senator, who grew up in Scarsdale.

In 2018, the Committee for Historic Preservation said the current owners needed to keep at least half the structure intact. Docomomo U.S. New York/Tristate, which according to a letter written by president John Arbuckle, works “to identify, document and protect buildings, sites and neighborhoods of the Modern Movement,” got involved to help ensure the property originally designed for Jacob J. Alpern, remained as intact as possible during the process with the historic preservation committee.

Arbuckle wrote: “This house, completed in 1950, was among the earliest of [Tafel’s] post-Wright commissions. It embodies distinctive design attributes of his residential work: modesty, practicality, and an intimate relationship with the landscape. Tafel was particularly attuned to the needs and rhythms of modern family life, which are reflected in his compact floor plans and built-in cabinetry. The house’s dipping eaves, cypress, and the continuation of exterior masonry as an interior finish are signature details of Tafel’s early residences. Additionally, the design clearly reflects the influence of Tafel’s mentor, Frank Lloyd Wright. The house was sensitively restored by architect Linda Yowell in 1997 for a prior owner. It is rare to have a Modern Movement residence retain such design integrity.”

For Kaiser and Sokoloff, it was rewarding to make the decision to get as close to the original design as possible. The biggest addition that had been made over the years was a pool, which they kept, of course.

Through an interior designer friend, Sokoloff and Kaiser found Moser, a 1976 SHS grad, to lead the project. Moser got his start junior year at SHS in an architecture class and then studied architecture one summer at Cornell before enrolling there for his undergraduate work. After working in Boston for a year, he got his master’s in architecture from Harvard University. He found his way back to New York after a year overseas and now lives in Larchmont. The office of Stephen Moser Architect, which he founded in 2013, is in Manhattan.

Since starting his firm, Moser has mostly worked on private residences, but more recently has been doing some preservation and restoration work on mid-century modern homes around the country. He’s also done civic-related projects, including a competition for a museum in Lima, Peru, and closer to home at Summer Stage and Fort Tryon Park in New York City. “A lot of architects will have our meat and potatoes work, which is our residential work, and then there’s the more speculative work that’s more large scale,” Moser said.

Without the original blueprints to work with, Moser relied on old photos, historical research and his knowledge of Tafel’s works to help guide important decisions that needed to be made. At one point Sokoloff and Kaiser were going to put on an addition, “but as things evolved we decided not to,” Moser said.

“It’s a different skill set, but what’s always really nice is if it’s a good piece of architecture, you like doing it,” Moser said. “You begin to understand the thought process that goes into designing a house like this and then there are things you do that are much more selective, much more subtle. It’s more about editing. It tends to be with these houses, that changes have built up over time and you’re sort of taking those away.”

The “tired” and “run down” house had some water damage and the roof needed replacement — they went with porcelain tile on the roof “in keeping with the original design,” Moser said.

“We redid the entrance and it was really about stripping away years of paint and bringing back some of the natural finishes,” Moser said. “We reconfigured some of the steps for the entrance. In the entry there were a lot of dark tones, so it was making it a light and airy space.”

Kaiser said the house is “very private,” because no one can see it. “It’s a nice retreat almost, because you’re with nature, which is very uncommon in Scarsdale,” Kaiser said.

“What I really liked about the house was the way the outside comes in,” Kaiser said. “When you’re in the house, every room has windows that are big and they fill up the whole wall in most rooms. They allow the outside in. The way the house is oriented it's the long way on the property, so basically no room looks out to the street. You see the landscaping around the property.”

Kaiser, Sokoloff and their three children moved in last September and have been thrilled with the purchase ever since, especially with the COVID-19 pandemic keeping them mostly at home since March.

“We’ve been living outside during the pandemic in a way — we’ve been in the yard and by the pool, which was added, but integrated well into the landscape — so we’ve been enjoying the outside property,” Kaiser said, adding that they also enjoy views of nature visible from every room when they’re the inside. On the inside, the living and dining rooms are the “focal point” of the house with the original fireplace and a slanted roof with triangle windows that can be enjoyed from inside and out. “Even the playroom is not a basement and has windows to enjoy the outside,” Kaiser said.

This was Moser’s first restoration project in his former community.

“What’s interesting now is there’s a new interest in mid-century modernism and that architecture,” Moser said. “I like to think that we’re working in that spirit. Whenever you’re doing a restoration project there’s moments where you have your own ideas, but it’s also about collaboration. It’s like when you are writing an article and you have a good editor. I feel like we were being the editor and bring out the things that were really good.”

8 Overlook is absolutely stunning and beautiful. Glad that the owners have this beauty surrounding them and the privacy of the area.

Great article - historical preservation at its best! Welcome back, Martha, and thanks to you and Dan for bringing such a beautiful family with you....