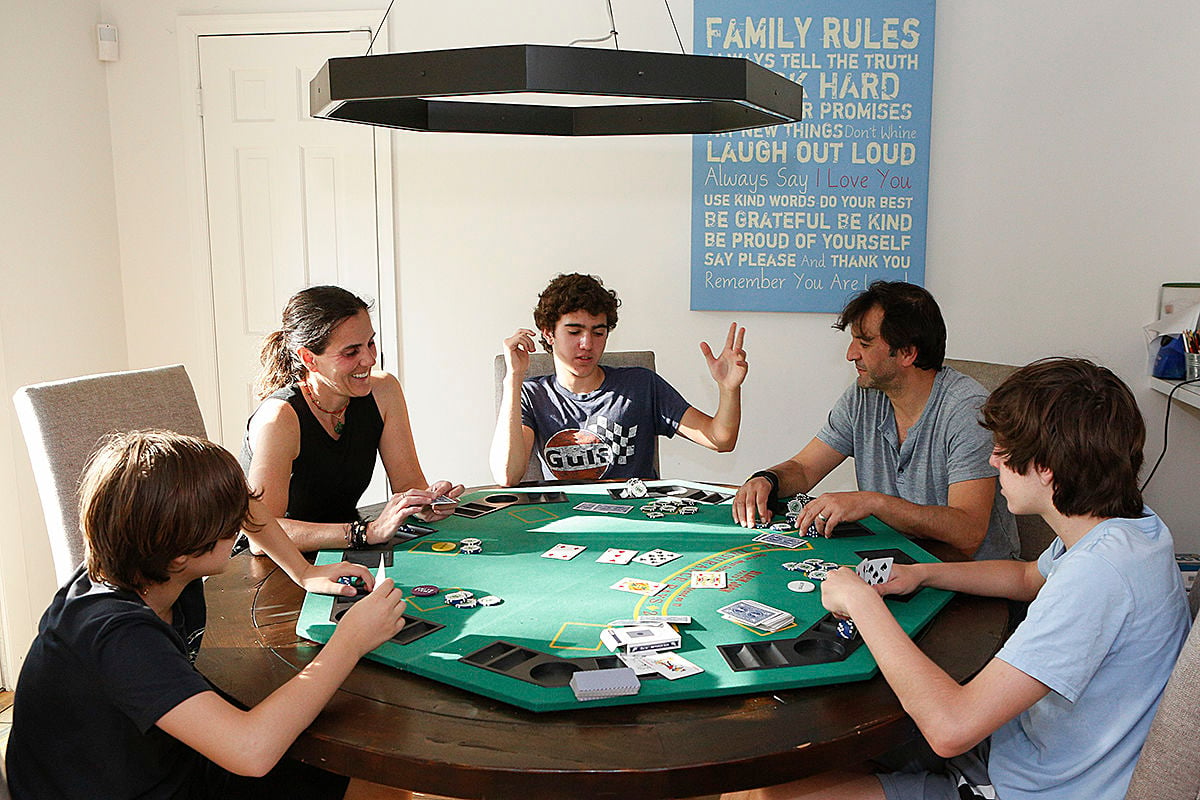 Nico, Theresa, Cyrus, Babak and Darius have developed a family poker game during the last few months. Nicol has really developed into a strong player. 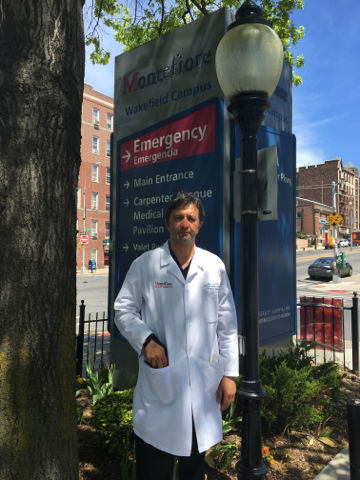 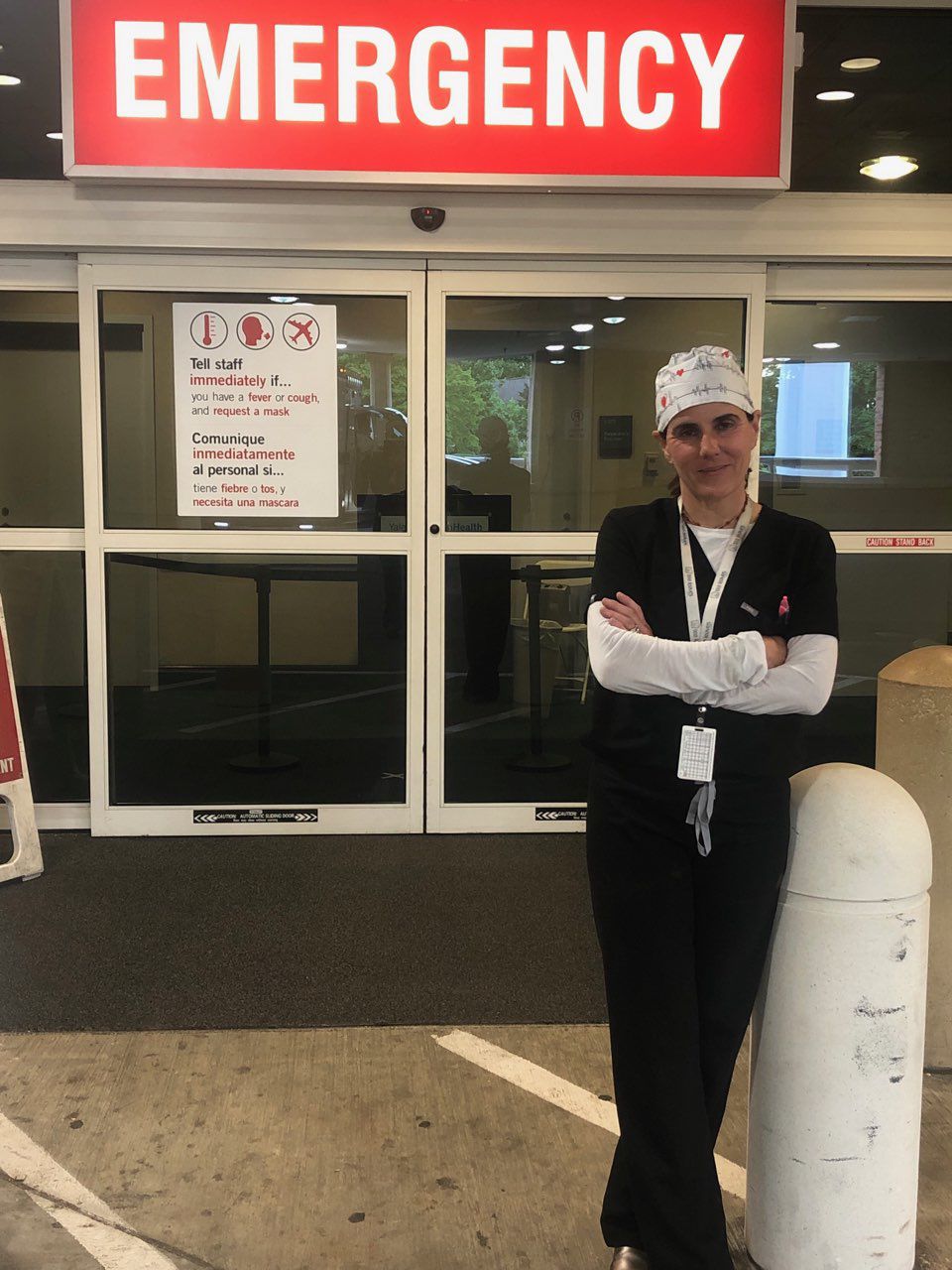 Theresa Maldonado outside the emergency room 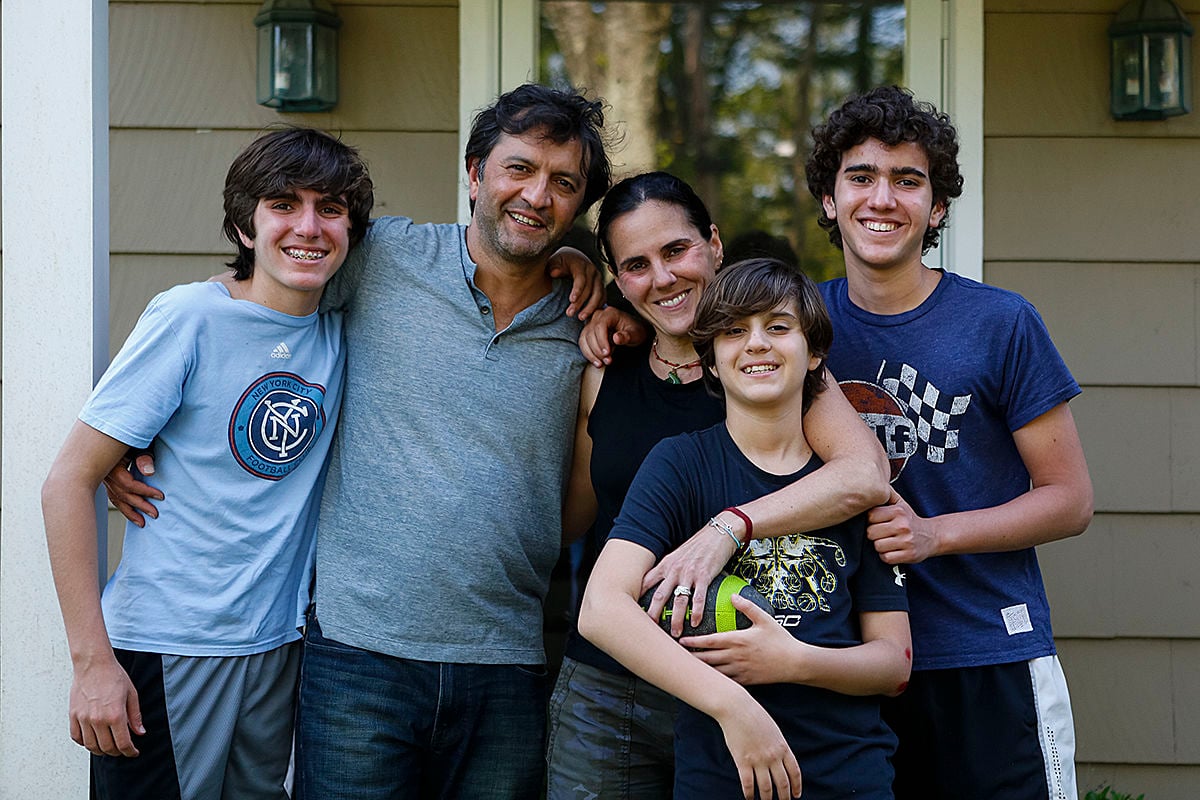 Darius, Babak, Theresa, Nico and Cyrus at home in Scarsdale. 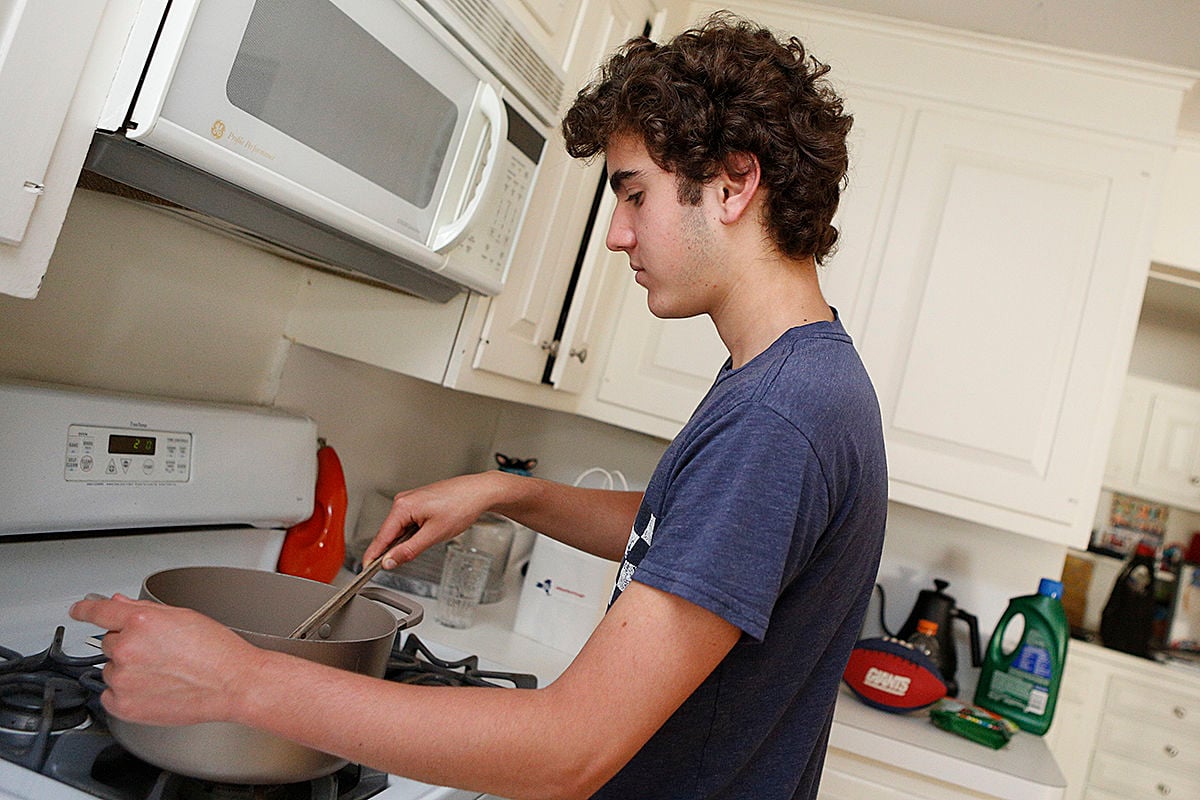 Cyrus is often in charge of making lunch on school days. 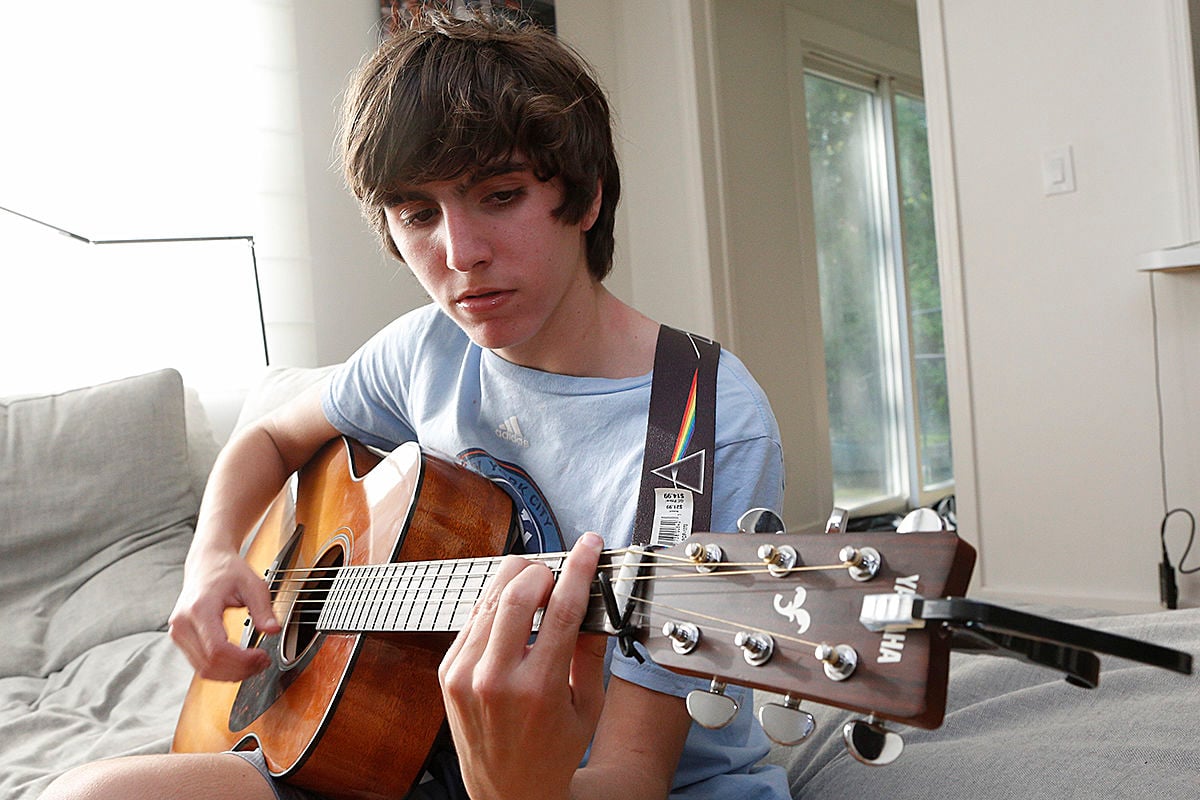 Darius has had more time to work on his music. He plays several instruments. 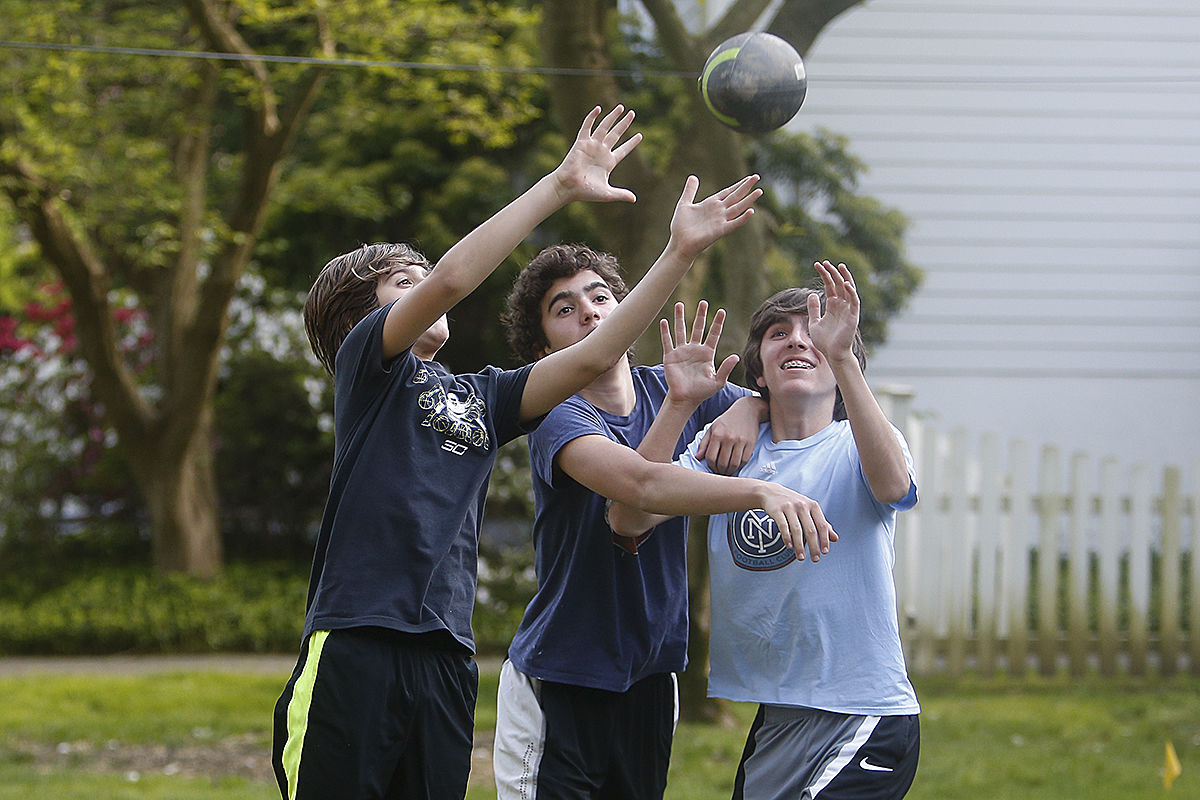 Family football games have been a highlight of sheltering in place. Mom and Dad play, too. 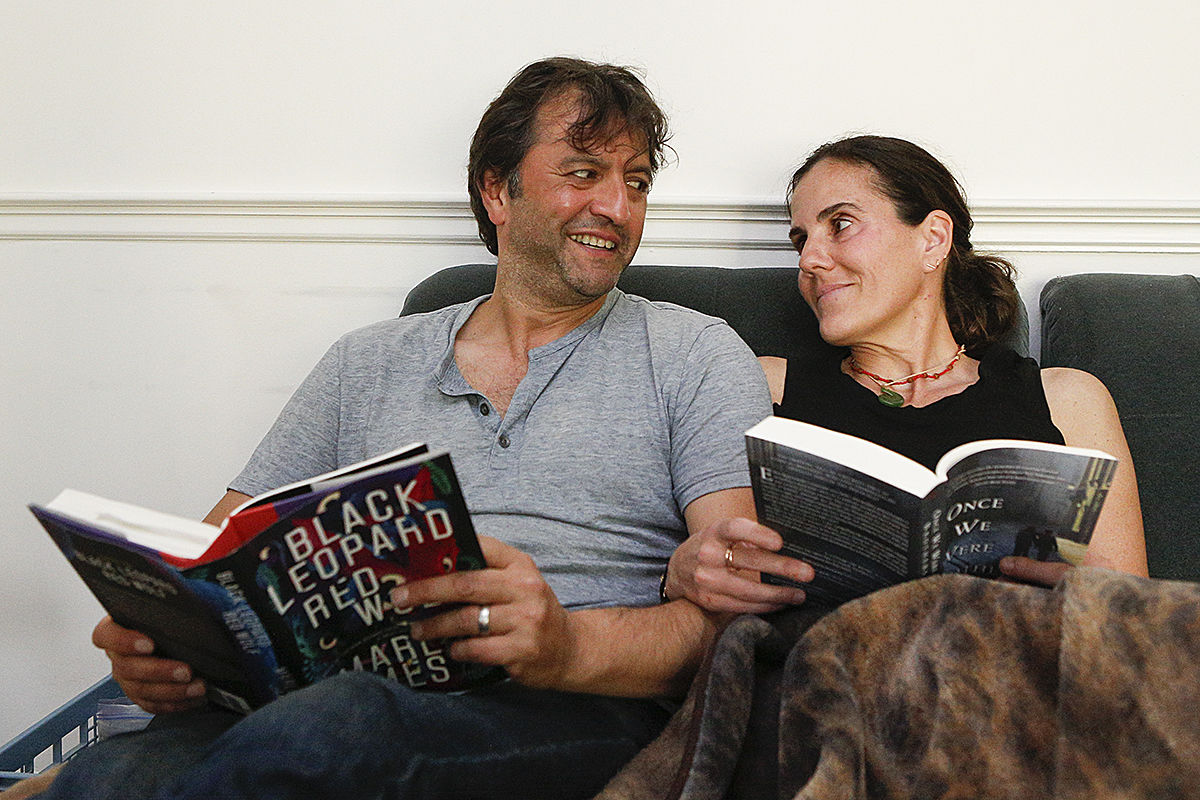 Babak and Theresa have also strengthened their bond during the pandemic. 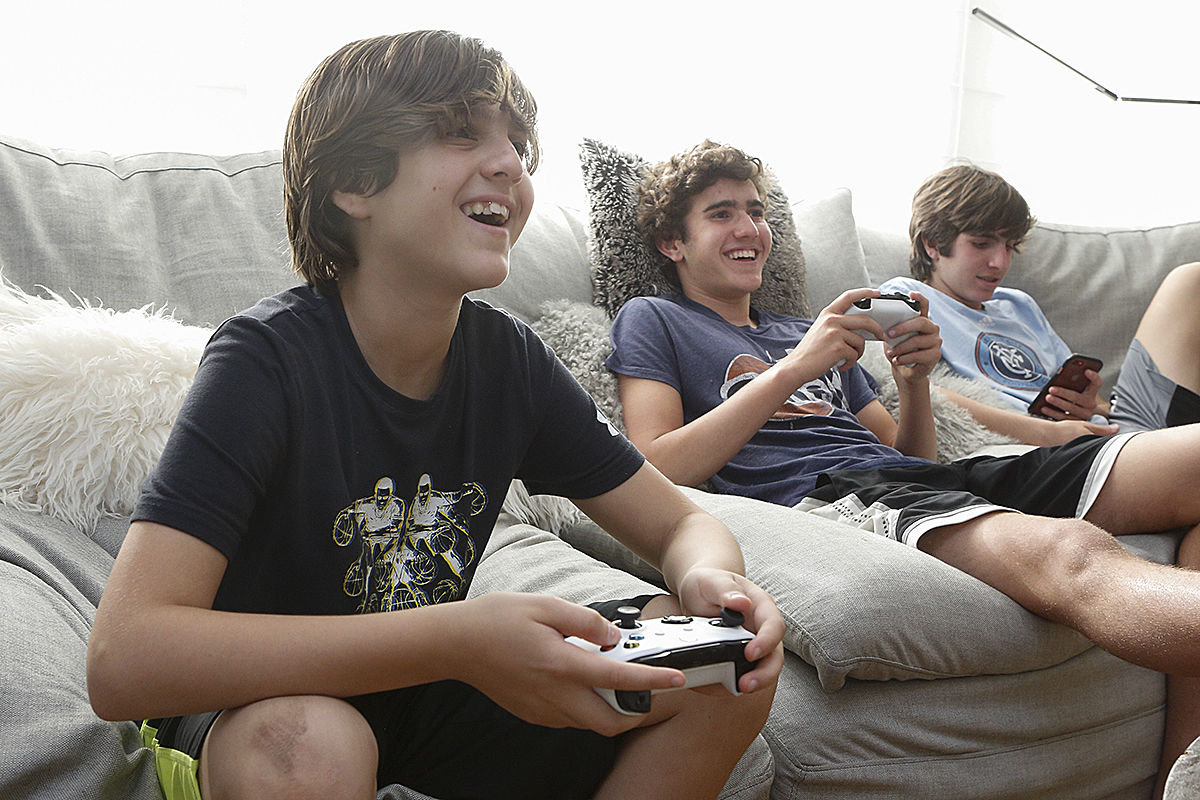 Nico is not only good at poker, but he likes to win at video games, too.

Nico, Theresa, Cyrus, Babak and Darius have developed a family poker game during the last few months. Nicol has really developed into a strong player.

Darius has had more time to work on his music. He plays several instruments.

Nico is not only good at poker, but he likes to win at video games, too.

Though it might sound a bit like a frat house, it’s not. The Toosi family in Scarsdale is just doing what it can to pass the time during the COVID-19 pandemic.

As you can imagine, it hasn’t been easy at work or at home for the family, but that doesn’t mean it hasn’t been good. Though Mom and Dad can be out of the house for long hours, rarely are the kids alone for more than four or so hours.

“In terms of the pandemic how it impacted our family, having the boys at home has been both a boon, but it has been a challenge as well,” Babak said. “Having the boys, one of us has to be around, so that’s a challenge. Before all of this we drove them to a lot of different activities. Scheduling all the different things they do was hectic, but it was fun. We don’t really have to do that now, but one of us would have to be home for that.”

When the boys do have stretches of time where they have to fend for themselves, they are typically doing their schoolwork, having lunch prepared by Cyrus or relaxing around the house with their wide array of interests.

“It’s not too terrible,” Cyrus said, adding, “Half of it is making lunch and half of it is mediating who gets to use the Xbox.”

“We’re relying incredibly on the boys, but they’ve been incredible rising to the occasion being left alone for several hours,” Theresa said. “Thankfully they’re older, but they have to make their meals and do their homework and it’s been seamless in terms of the Zooms and doing what they need to do in terms of schoolwork and never complaining. We were really lucky in that sense to have them be well adjusted and get how crazy our jobs are and come home and have the kitchen clean and the dog walked, the bathrooms cleaned, food made and not at all add to any stress that we go through.”

Both Darius and Nico will be missing out on live moving-up ceremonies, which they didn’t seem too concerned about. They are both more curious about how the schools will be able to help them make the transition to a new school — high school for Darius, middle school for Nico.

Darius sees how much e-learning work Cyrus gets — an hour or two more per day — so he will at least be prepared to expect an increased workload. “I see it’s tough,” he said. “I remember his freshman year he was sometimes complaining about some classes being hard and I’ll be going into some of those classes. But he’s an adviser, so he can probably help me.”

As the youngest, Nico likes the distraction of schoolwork during the times Mom and Dad are at work. “Doing work all day takes my mind off them,” he said. “It saves me from missing them because they’re gone a lot.”

Like many families these days, the Toosis are counting their blessings. For them it’s come in the form of more family dinners and more time doing activities together, such as playing football — Theresa and Cyrus lead the season series — and playing poker.

“I think it’s better,” Nico said. “It’s bringing us closer because we’d normally be gone all day at school, so now we get to spend more time together.”

If anything, the schedules — or lack thereof for the kids — have strengthened the family. “Overall I think it’s really matured the family,” Theresa said. “When they are alone they really have to figure it out. If they get into fights they have to mediate that.”

The boys miss their grandparents and hanging out with friends. They go on socially distanced bike rides with friends wearing masks, but they’re missing their sports and other activities. They realize also there likely won’t be sleepaway camp and other great summer activities to enjoy. “It’s kinda getting old doing the same thing every day, not going anywhere,” Darius said.

Babak noted, “They have to talk to each other more.”

In addition to worrying about how the boys are doing when they are holding down the fort on their own, the major concern for Babak and Theresa, who met at Montefiore, where Theresa had a fellowship, is the spread of the coronavirus. And that includes the potential to bring it home from work.

“I think the biggest impact for our family is making it very safe for them to not get potentially infected, literally disrobing in the garage, running down to the basement and putting our scrubs in the washing machine and showering downstairs, but still constantly worrying we’re going to bring it inside and what happens if one of us gets sick,” Theresa said. “What would that be like?”

Babak sees the mixed bag of the virus, both the tragic and the uplifting, so he holds similar fears.

“It has been inspirational at work to see how this situation has created camaraderie and really solidified our team,” Babak said. “Our people definitely rose to the occasion. We’ve had tragedies and lost staff to COVID. There’s the stress dealing with all of this and the stress of not knowing if you’re going to bring this infection home to your kids and not knowing if you yourself get sick where you will end up. Are you home for two weeks or in an ICU intubated?”

Both doctors credit their respective hospitals for being ahead of the curve when it came to protecting both staff and patients as best they could. Yale had one of the first tents up for testing and never struggled with PPEs. “In that respect it’s been an amazing place to work and every colleague has covered for each other and been very supportive,” Theresa said.

The first month was particularly frightening, even for doctors who believed they had seen the worst throughout their 20-year careers.

“This is something I hope I never see again,” Babak said. “It’s not something any of us were prepared for in terms of all the challenges it brings. We’ve done a lot of drills on emergency preparedness, but I don’t think we had any scenarios where we would have to deal with this kind of magnitude of one disease taking over the entire health care and all the challenges it brings in terms of having enough protective equipment for the staff, having enough ventilators to take care of patients.”

Then there are the actual medical challenges of the way COVID-19 presents and develops. “There are issues that no one would have guessed from respiratory illness to causing a lot of kidney failures, hemodialysis being an issue,” Babak said. “No one could have guessed that. It’s a lot of work to deal with it on a daily basis.”

As ER physicians, they work at the point of entry for patients, the place families are no longer allowed. Theresa’s work has changed more than Babak’s over the last two months. At first she was shifted over to help work with adult patients, but more recently kids have been getting sick, too.

“Lately there have been unfortunately pediatric patients coming in with COVID,” Theresa said. “It’s been a shift, but not tremendous. Interestingly it’s been quite different [for kids]. They present more with abdominal complaints and rashes. Mainly in adults I’ve seen respiratory. And we are the point of entry, so we get to see them first and then the disease can progress to be an obvious respiratory decompensation, but the kids I’ve seen have been more of a GI/abdominal pain and rashes more similar to Kawasaki [syndrome]. For someone who has been doing this a long time you see it not often in your career, but you see it and you know it.”

“She sees the sickest of the sick,” Babak said. “In my experience we’re not seeing that, but now we’re seeing the multi-organ failure, but that’s rare. Hopefully kids are still safe.”

The entire family has seen support from both their communities at work and at home. There are text messages, people making shields, colleagues checking in, passersby thanking them, friends bringing over food.

“It’s been really amazing to see how supportive everyone has been,” Babak said. “It’s a bittersweet experience.”