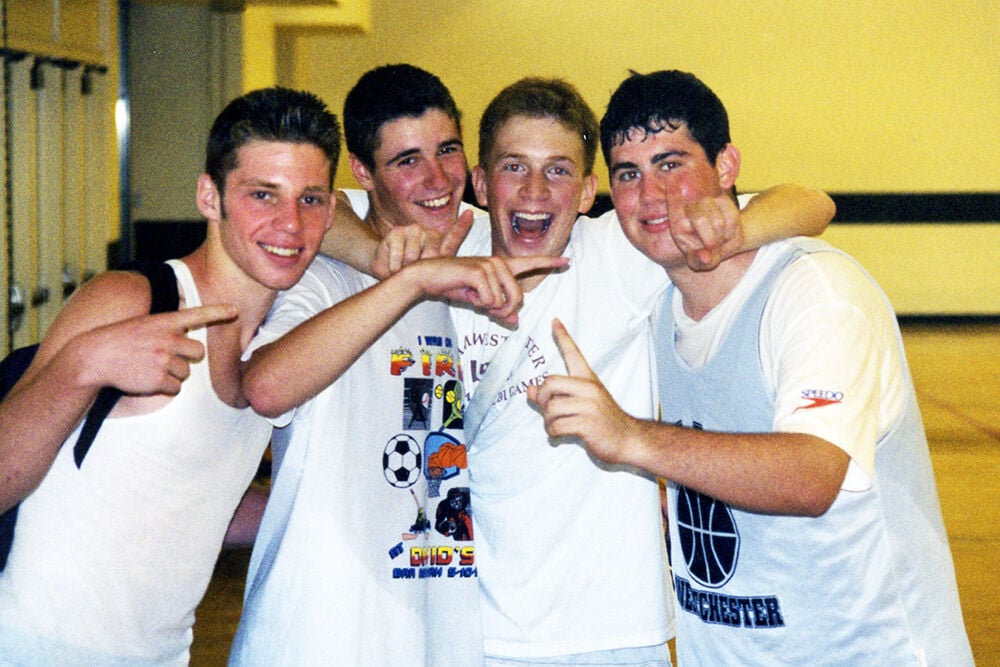 Jason Stein, Rich Cohen, Matt Jacobs and Jason Feintuch competed together in the Maccabi Games in the late 1990s. 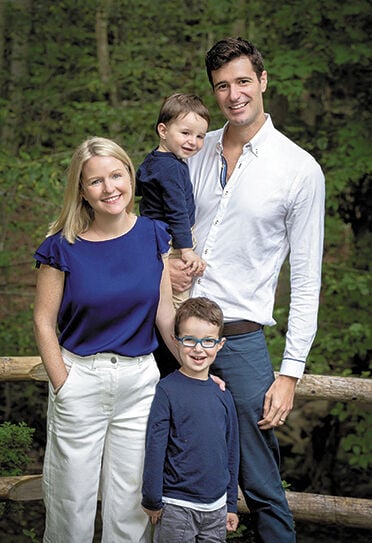 Friends and family will always connect Rich Cohen with basketball. And now strangers will have that opportunity too.

Prior to his death last September at age 37 — an MRI a year earlier found he had a perforated colon and during emergency surgery the doctors found cancer — Cohen, a 2001 Edgemont High School graduate, had “honest conversations” with his wife, Liz, and his parents, Gerry and Stefani, about what he wanted not only for his children, but for his legacy.

For his sons, Oliver, 7, and Sam, who turns 4 on March 2, Cohen wanted a bench in his memory at their local park in Brooklyn, Cobble Hill Park, where the kids could sit and have ice cream. For the greater community he chose a scholarship for Maccabi Games athletes who otherwise couldn’t afford to participate in the athletic and cultural celebration that takes place every summer.

“He got into it because he loved basketball, but it was really the social aspect and the cultural aspect that he came to appreciate, meeting kids from all over the country,” Gerry said. “They try to separate the kids from the games when the games are over [by] having them do some Tikkun Olam, repairing the world. There was a lot of activity in that direction. He just loved it.”

Liz, whom Cohen met at Syracuse University, said “everything progressed quickly” after the idea first surfaced, and she also wanted a donation platform for the Colorectal Cancer Alliance, which offered crucial support for her during her husband’s illness.

Between the two funds, donations have grown to nearly $60,000.

“A lot of people don’t spend their lives thinking about what their legacy will be — they just live it,” Liz said. “And when you’re sick you don’t always have the cognitive ability to make decisions like that, so in a way it was the best possible scenario … because we were able to talk about everything, including that.”

Cohen competed in the Maccabi Games three times and coached two teams with a friend, Matt Jacobs, whom he met during their first tryouts at the Jewish Community Center of Mid-Westchester in Scarsdale when they were 14 years old. Jacobs is from Scarsdale and he and Cohen might never have met to become friends and teammates had it not been for the Maccabi Games.

Cohen and Jacobs took home a silver medal in Hartford, Connecticut, their first year in 1997 and their final year they won gold in Rochester under coaches Mark Berkowitz and Stan Pluchik in 1999.

A year after aging out of the games, Cohen and Jacobs coached the Maccabi 14-u girls team, which Cohen’s sister, Becky, played on in Cincinnati. When the Games came to Westchester for the first time in 2009, Cohen and Jacobs joined forces once again, this time leading the 14-u boys team. The opening ceremony that year was famously held at Madison Square Garden.

“That’s one of those dreams you have when you’re a kid,” Jacobs said. “It was amazing. But we played three years and coached for two because it had such an impact on us. It was voluntary and we wanted to give back.”

Jacobs helped launch the Maccabi Scholarship Fund with the JCC Association of North America, which will administer the actual grants. Grants will be available for any U.S. delegation. Family and friends will work each year to make sure the account is well funded.

“It’s something that I hope lasts for a really long time and hope it helps kids be able to have the experiences that Rich and I had, and if you’re able to meet your best friend through it, that’s even more incredible,” Jacobs said. “The goal is to help as many people as we can.”

Cohen and Jacobs started their friendship as teammates and ended it that way, having played in leagues in New York City over the years, including winning a championship one year. The only time they found themselves on opposite ends of the court was junior and senior year of high school when their coaches, Berkowitz for Edgemont and Barry Bergen for Scarsdale, held a crossover game between the small school and the large school. Senior year they met up at mid-court as captains.

Jacobs called Cohen “a magnet of a person,” “outgoing and funny” from the day they met. In that regard they were opposites, but still they hit it off because their games complemented each other.

“When you meet somebody at 14 it can be such an awkward time … we went through so many things in life at the same time,” Jacobs said. “This is a huge credit to the generous and incredibly beautiful person Rich was; when deciding where to leave his stamp, he thought it’d be great to raise money for kids who wanted to participate in the Maccabi Games and couldn’t afford to do so. That just speaks to how incredibly thoughtful he was.”

For the final decade of his life, Cohen suffered from Crohn’s disease, an inflammatory bowel ailment, which his dad called “an annoyance.” Since he didn’t have any symptoms of a perforated colon or cancer, everything that transpired from September 2019 to September 2020 was a shock. Treatment worked for a while, but eventually, in August 2020, there was nothing else the doctors could do, though Cohen provided inspiration to friends and family as he fought hard to the very end.

“All of us, we never thought he wouldn’t get better until that day that they said there was nothing else we could do,” Gerry said. “He said to the doctor, ‘I can’t believe we’re giving up. I feel like we’re just getting started on this.’ And this had been almost a year. The last few weeks even then he was incredibly strong except the last day or two.”

The day before his initial September 2019 surgery, Cohen filmed himself playing basketball at Adam Yauch Park in Brooklyn, named for his favorite Beastie Boy. It turned out to be the last time he played, and it’s become cherished footage for his family.

That video of him playing basketball for a couple of hours is meaningful not only because it was the last time that he played, Liz said, but also because “he had that intuition and he made that part of this journey.”

With his sons, Cohen took several trips down memory lane in that final stretch, including showing them old game footage from high school and articles from The Scarsdale Inquirer.

“What he really liked was that he was able to stand out and be a star player at a small high school,” Liz said. “I think Rich credited basketball with his self-confidence, with everything, including his ability to effectively work and manage teams ... He said he always felt a little awkward or out of place before basketball came into his life. Once he discovered how good he was, everything blossomed.

“He goes back to basketball and it was important that his kids not necessarily play basketball, but find the same joy in something [and gain] the same life lessons he learned from sports.”

Gerry and Rich had their one-on-one games to 21 when they could, though there was a shift in power as both father and son got older. “It shifted from when he was a kid I let him beat me or keep it close and now he kept it close,” his dad Gerry said. “I’m certainly not what I used to be. I told him I would teach his kids how to take a jump shot. He said, ‘Dad, you know you really can’t jump anymore.’ He kept his sense of humor to the end.”

For Cohen, who was in marketing and advertising sales, it was always a dream to work for the NBA and for the final year and a half of his career he worked in corporate sponsorship sales for the WNBA, which is owned by the NBA.

“This was an incredibly tragic loss,” Jacobs said. “Rich was one of those people that had just a big, big personality and in such a great way and one of the things he loved most, of course, besides his family — he was an amazing father and husband — he loved bringing people together, and he loved bringing people together from all walks of his life … He would connect people that way. It kind of flows into his desire to have this scholarship set up to have people make more connections.”