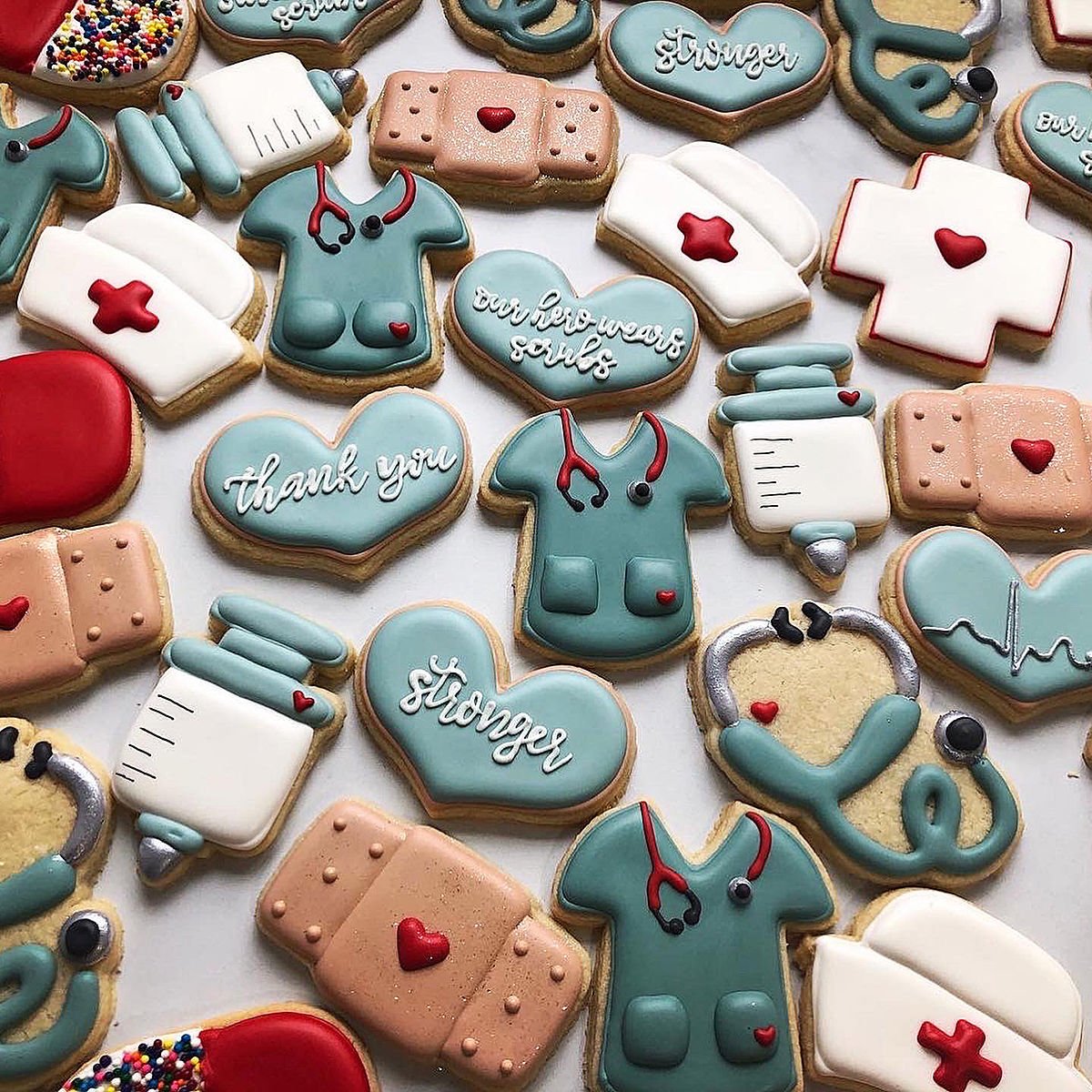 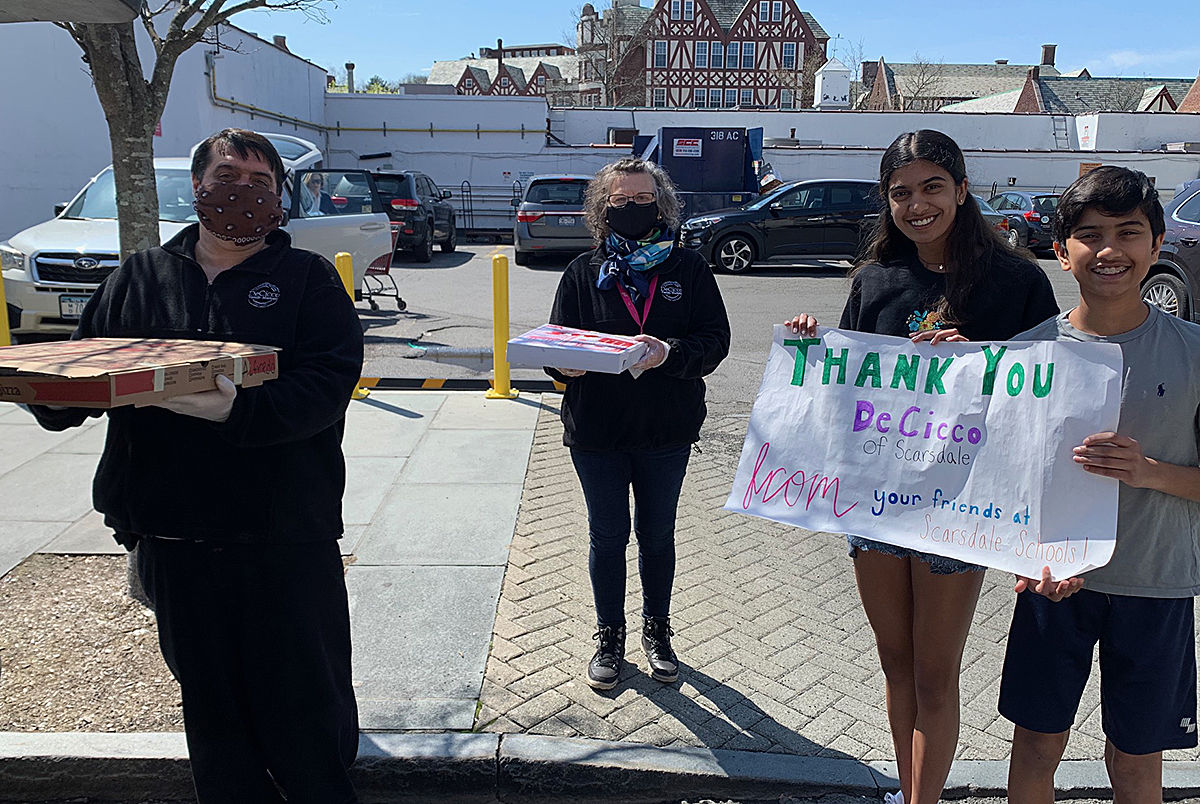 The Shadaksharappas deliver food to DeCicco. 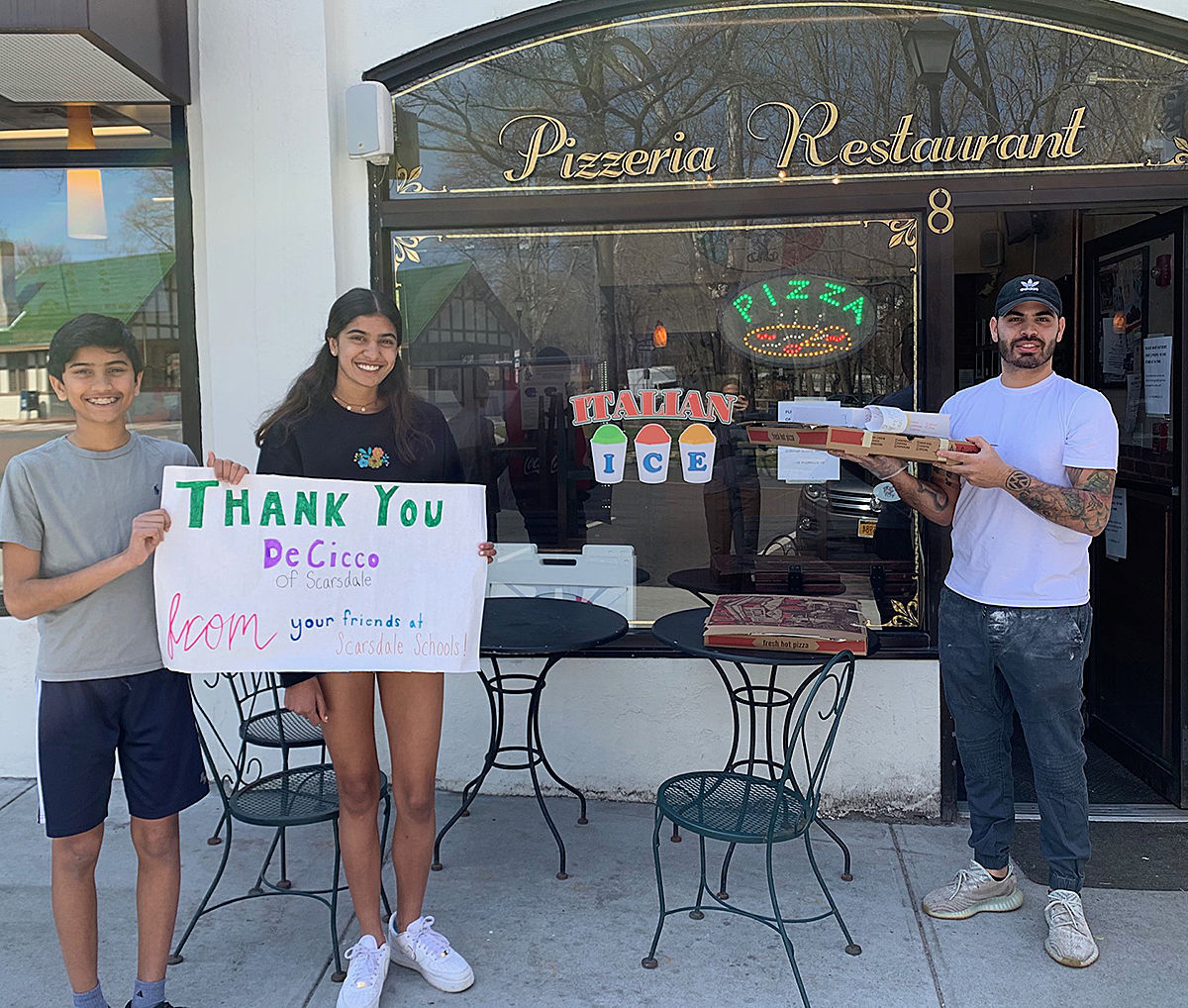 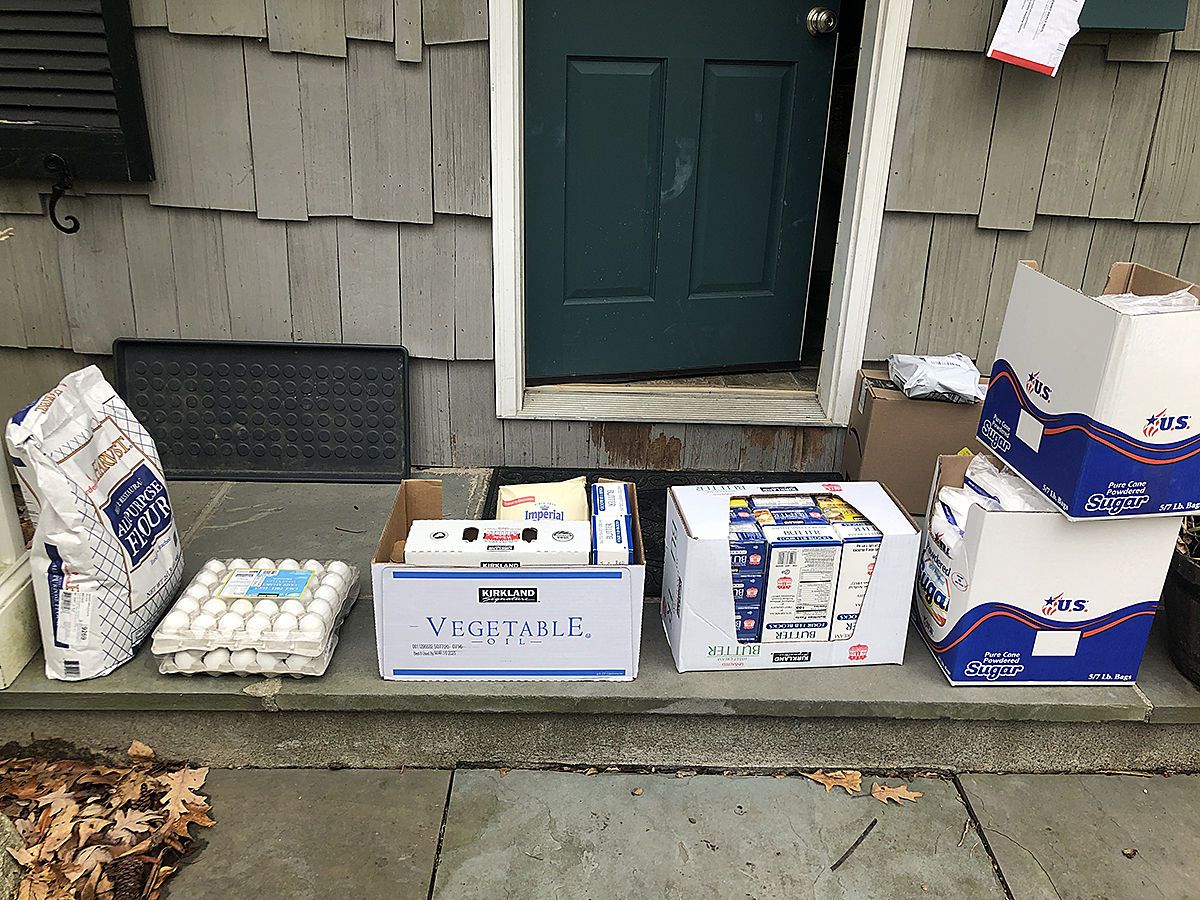 An ingredients drop-off for Elise Houpt. 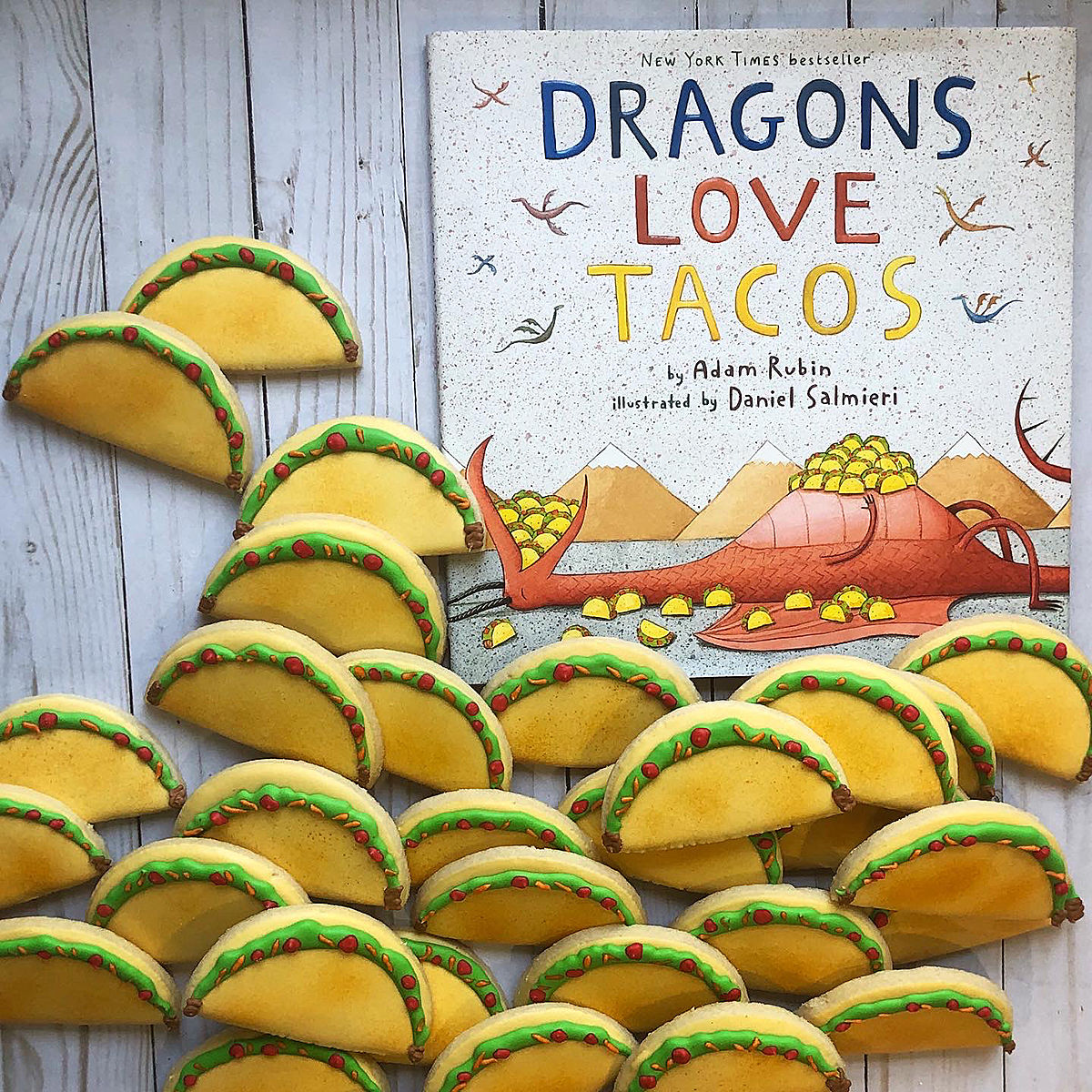 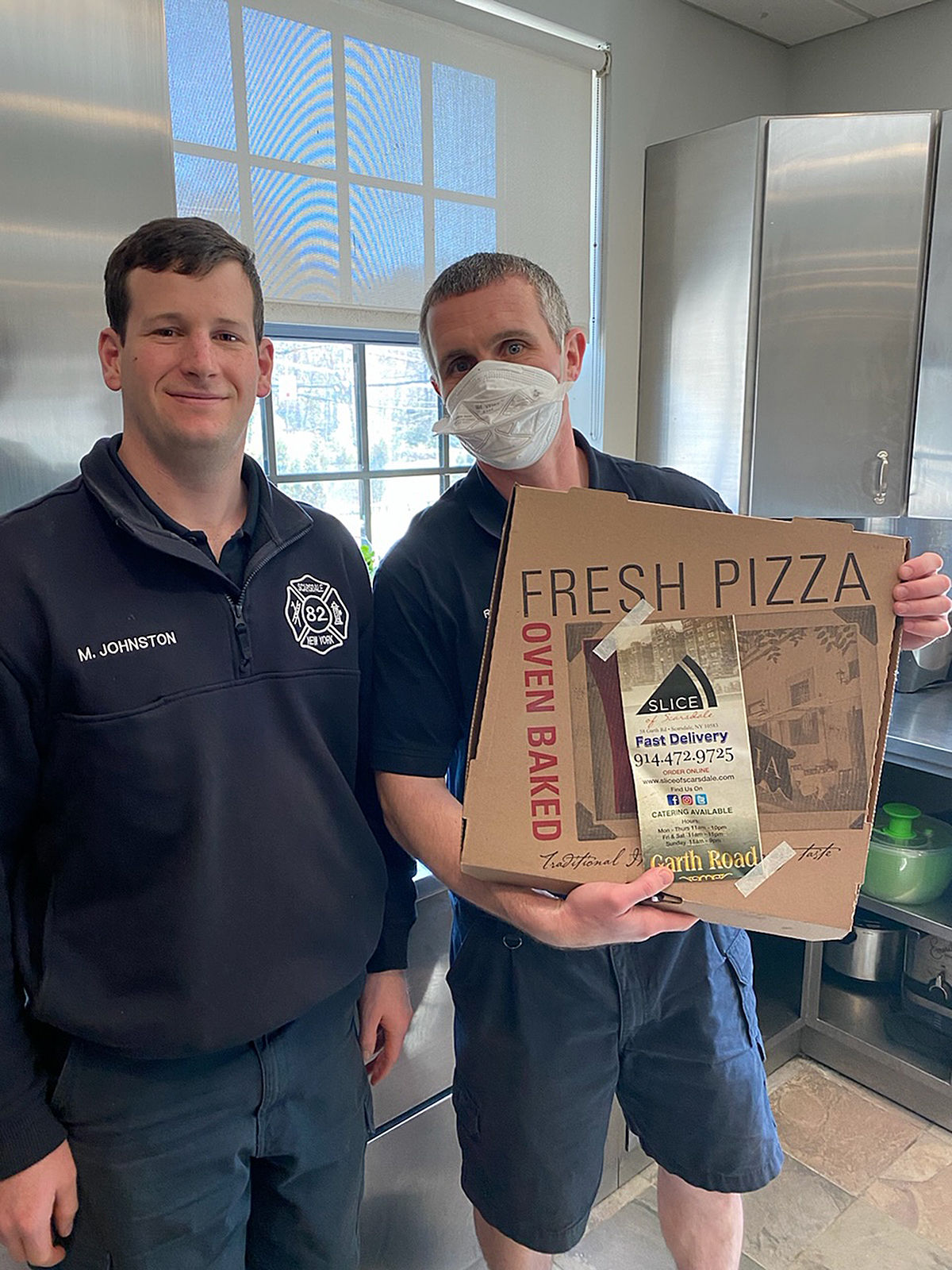 The Subins sent pizza to the fire department.

After her three kids are fast asleep Elise Houpt gets to work. She gathers all her ingredients and starts to mix. Hours pass and she finally begins to see the fruits of her labor — tins filled with sugar cookies fresh out of her oven. She stays up until around 3 or 4 a.m. every night baking with a purpose, knowing that the cookies will eventually nourish those on the frontlines battling the coronavirus, which has overwhelmed first responders across the state.

“If it brings them a moment, like a small smile to just see something like that, or they like the taste of them and they can sit for five minutes and have a little break then that’s all that matters,” said Houpt. “That’s what I think of when I’m making the cookies. I’m making them and I’m reflecting on how hard these people are working and all they need is a little cookie break now and then.”

Residents across Scarsdale and Edgemont are putting forth a mass community effort to help feed first responders during the ongoing health crisis.

Houpt knows the power of cookies. She said she felt enormous anxiety after the 2016 election and couldn’t find a way to channel those feelings into something positive. For her daughter’s birthday she ordered cookies from a bakery in New Jersey and was fascinated with the intricacy and detail in the icing.

“When I saw [the cookies], they were just so pretty that I decided to try making them,” she said. “Ever since then I was hooked.”

Baking cookies helped Houpt relieve the buildup of her political stress, she said, and she eventually created a business, The Cookie Studio, which is based out of her home in Edgemont.

After the outbreak of COVID-19 last month, Old Edgemont resident Susanna Berger — a friend of Houpt — used Facebook to coordinate families interested in making baked goods for hospital workers in the area. Houpt promptly put her name forward to lend a helping hand and has since baked 300 cookies for first responders. In a single week, she baked 12 dozen for local hospitals in the area and has received donations from 25 families eager to sponsor a basket of cookies for the health care workers.

“It’s all community effort. I think everyone is trying to just do what they can,” she said.

After the initial post on Facebook, Berger created a sign-up sheet called “Treats 4 Healthcare Heroes.” More than 50 residents signed up to bake and more than 100 batches of cookies had been delivered as of Tuesday, April 7.

“[Our] goal is to make sure our health care professionals feel supported. That’s the goal of the whole thing. It’s not about cookies,” said Berger.

Those who sign up are encouraged to make batches of 50 to 80 cookies and are assigned to drop off the baked goods at the residence of a local doctor, who will then bring the cookies into the hospital.

“Initially it was just a couple of doctors and then it scaled to the four or five doctors,” she said.

Now, cookies go to the ICU and ER at New York Presbyterian Hospital, Mount Sinai Hospital and Montefiore Hospital in the Bronx.

According to Berger, the volunteer schedule runs into May with some signed up to bake every week.

The effort will continue, Berger said, “until this thing is no longer shutting us all down.”

Although many families across Edgemont are looking to volunteer to help first responders, some are stressed by the new normal of sheltering in place at home, coping with online learning for children and working from home for adults.

In response, Houpt started a new project April 7 to help families relieve stress and anxiety. She started by getting neighbors to read the book “Dragons Love Tacos” by Adam Rubin to their children. Afterward, she invited children who read the book to pick up a taco-shaped cookie for free.

“I’ve been trying ever since this whole thing started to try to figure out a way I can help support families [and] first responders,” Houpt said. “Families are just … stressed to a limit right now and … to bring a little joy into their lives, a little break, I mean that’s all I can do. Those are my skills, those are my talents and so I try to use them the best that I can.”

In Scarsdale, Melissa Subin and her husband Herb are also doing their part to help feed essential workers and first responders.

On March 30, the Subins started a GoFundMe page to raise $5,000 for food and personal protective equipment (PPE) deliveries to Scarsdale’s first responders. As of Wednesday, April 8, the fund had raised $3,785 and more than 300 lunches were served to personnel in the fire department, police department and EMS.

“Once I start something … I put 150% into everything I do. I get fast results because I don’t just sit and wait,” said Melissa Subin.

The fund supports about 30 meals a day, including weekends, from Slice of Scarsdale on Garth Road. With the money collected so far, Subin said she should have enough money to cover three weeks’ worth of meals for local first responders.

Last weekend, Subin and her daughter Brianna, a sophomore at Scarsdale High School, started the website “Bake Back America,” which is meant to inspire people across the nation to bake goods for local first responders. After contacting friends across the country, the Subins have inspired similar efforts in Connecticut and California.

“People don’t realize across the country and even [in] our local area, that the police are taking baked goods” as are other essential workers, she said. “Every day I say, ‘I have all these skills and I have a passion for this and now [I’ve] taken action.’”

Within two days of the launch of the project, Melissa Subin said she had 30 Scarsdale volunteers who baked more than 300 baked goods for the cause. Subin said her next delivery was planned for workers at the CVS on Wilmot Road.

“We’re trying to get food to [any essential worker],” said Subin. “Whether it’s out of the funds or the baked [goods].”

A pair of siblings, Diya Shadaksharappa, a sophomore at Scarsdale High School and her brother Rishi, a seventh grader at Scarsdale Middle School, have raised more than $500 from other students in the school district to feed essential workers at DeCicco Family Markets in Scarsdale Village.

“We wanted to do something to recognize people who are still working even through these times, so we thought maybe getting a lunch and raising funds from our friends would be a good way to recognize them and give back for what they’ve done for us to keep the shelves stocked and make sure that we have dinner on the table every day,” said Diya Shadaksharappa.

The Shadaksharappa siblings collected 30 individual donations through PayPal and Venmo to cover the cost of trays of pasta from Pizzarelli’s Pizza & Pasta on Depot Place for DeCicco’s 30 employees on Tuesday.

After delivering the food to the employees, the Shadaksharappas said they still had about $300, which they plan to use to feed other essential employees in Scarsdale.

“On the news, you see people making masks and PPEs to help out nurses and doctors, but then there’s other people on the sidelines who no one really thinks about,” said Diya Shadaksharappa. “I think noticing that and making a difference in that way, maybe they’re not in the doctors’ offices or the hospitals, it’s still important to recognize them.”