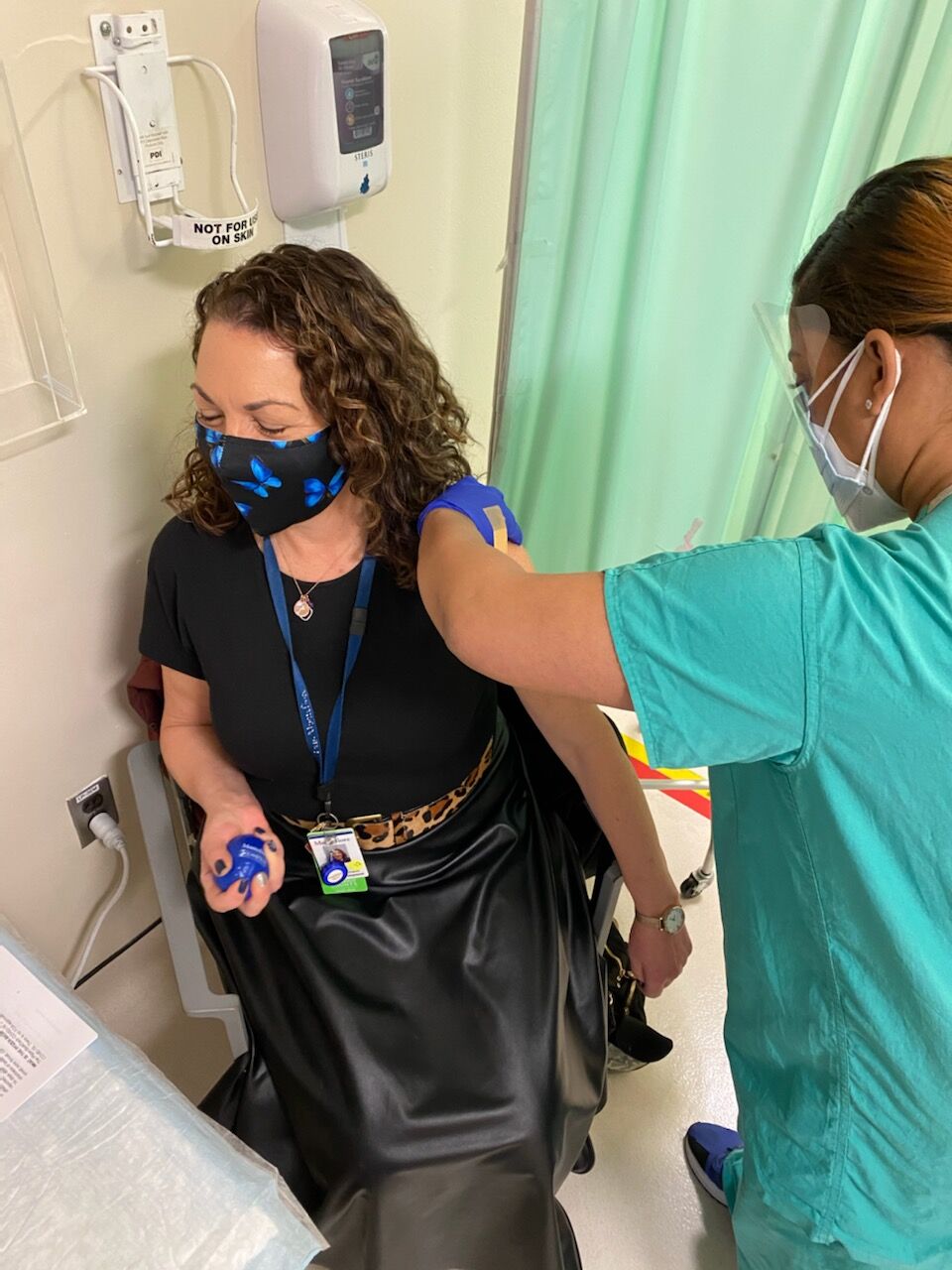 Sheryl Braun got her vaccine Tuesday, Jan. 12, at Montefiore in the Bronx, where she works as a fundraiser. 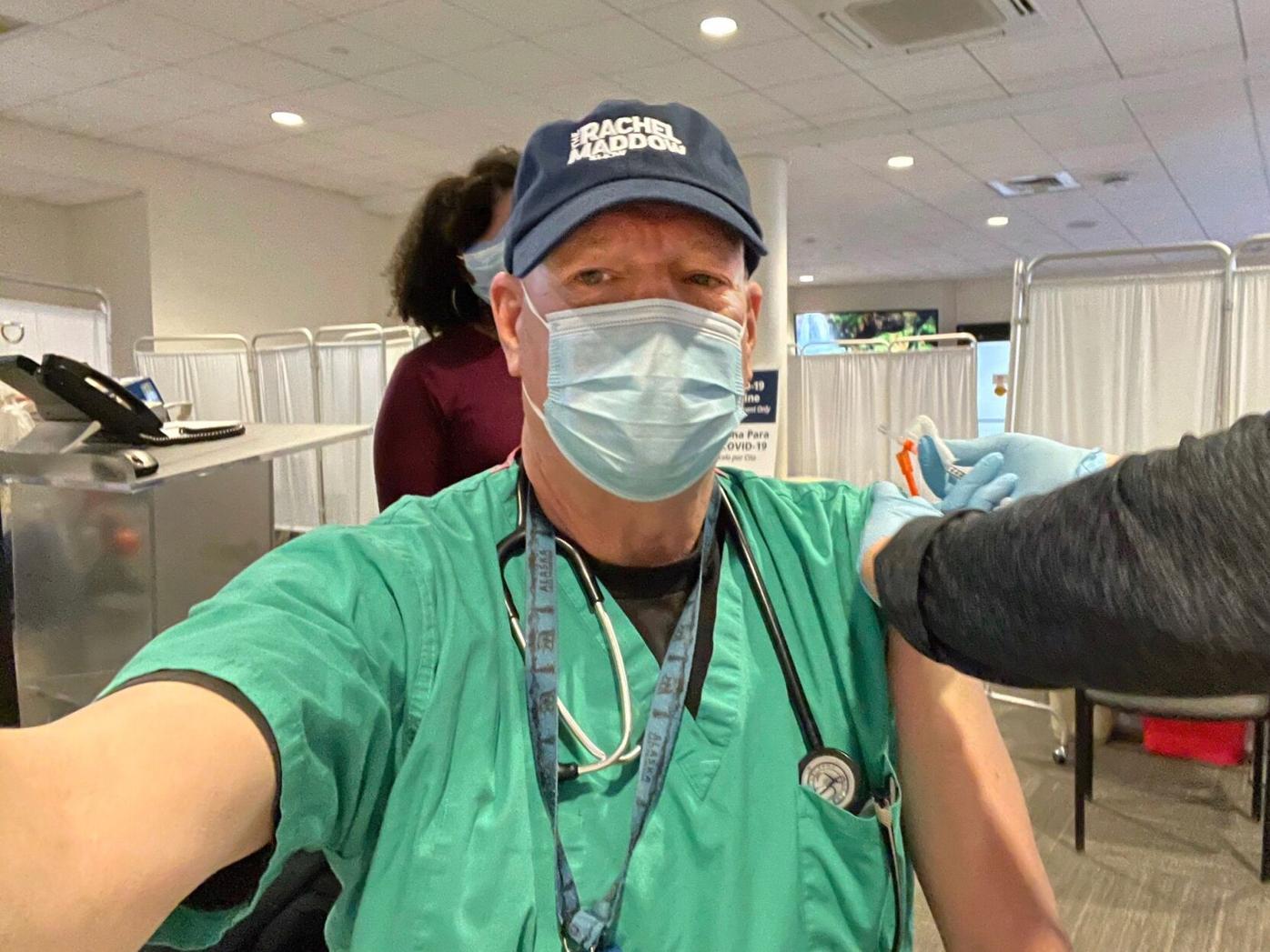 SVAC paramedic David Lawless got the vaccine at Westchester Medical Center the day after Christmas.

Eighty-six-year-old Rebecca Skolnik, a longtime resident of Edgemont, has become “fearful” during the COVID-19 pandemic. “I try to avoid going out unless it’s necessary, but I do get out and so far I’ve been lucky I guess,” she said.

When it comes to getting one of the vaccines — either Pfizer or Moderna depending on the location — she’s somewhat hesitant, but on the advice of her physician and her children, she’s signed up to receive the vaccine at the Westchester County Center on Thursday afternoon, Jan. 28.

Seniors 75 and over were part of New York State’s 1b group announced on Friday, Jan. 8, and four days later the age was dropped to 65. On Wednesday, Jan. 13, the county center in White Plains opened its doors to begin administering the Pfizer vaccine as a state-run mass vaccination center, one of 20 being set up throughout the state.

“I’ve been following it and seems to me like a big cosmic experiment,” Skolnik said. “It seems like it’s something I should want to get, but I worry abwout [what] kind I am going to be given. I can sign up for one, but I won’t yet know if it’s the Pfizer one or the Moderna one. And once I get that it’s not over — it’s two times. Will it match the first? All kinds of things go through my mind.”

Skolnik said she had cancer 35 years ago and it recently came back. She had surgery for her breast cancer and expects to finish radiation treatments prior to receiving the vaccine. Given her age and being immunocompromised, she’s in a doubly vulnerable state. Skolnik knows the vaccine is “important” and said, “It’s something I will do. I have no choice I guess.”

Frontline emergency workers like EMTs and paramedics were not originally in group 1a, which began vaccinating on Dec. 14, but they were soon added to the list. Scarsdale Volunteer Ambulance Corps president David Raizen immediately arranged for SVAC first responders to get the vaccine. Quaker Ridge resident and SVAC volunteer David Lawless got the Moderna vaccine on Dec. 26 at Westchester Medical Center, and looks forward to going back for his second dose on Jan. 23.

“I think some doctors made a plea to the state for first responders,” Lawless said. “I’m not sure how that worked, but I’m grateful we got bumped up on the list. We’re in the least controlled environment of any of the services. A hospital is a fairly controlled environment. It’s not less dangerous, but we’re going into people’s homes and we’re in close contact in an ambulance in a very confined space.”

Lawless is also a state certified EMS instructor and sometimes teaches at Phelps Hospital in Tarrytown. Recently he’s been working at their vaccination center monitoring patients who have received their first dose.

“It’s terrific,” he said. “I’ve seen no adverse reactions to the vaccine and I’ve probably seen a few thousand people get vaccinated. Obviously there’s a lot of concern people have and they have questions and they do a pretty good job of getting those answered. Some people have some anxiety, but they get through it. I can understand and certainly appreciate it with the amount of rhetoric about the virus and why people get nervous. They do a good job putting people at ease.”

Lawless said March and April when Westchester County became the epicenter of the pandemic was the most stressful time for any type of medical worker, calling it “really overwhelming and emotionally disturbing.”

Raizen quickly saw what was happening and got personal protective equipment for SVAC before shortages started to become the norm. Thanks to Raizen, “We at Scarsdale Ambulance were particularly fortunate,” said Lawless, who noted that it was still a time of fear for responders and their family members.

Lawless did contract COVID-19 in early December. He said it could have been while volunteering or at the grocery store or somewhere in between.

“I will say I feel safer at work than I do in the supermarket,” he said. “At least at work you’re very aware of your environment and you realize you have the gear you need and you’re very conscious of what you do, what you touch, what you move. While nothing is 100 percent, at work you have a tendency to have your guard up [more] than when you’re running errands.”

While Lawless’ case was mild and he has some lingering effects, it was nothing compared to the things he’s seen from a cross-section of the patients he’s helped through SVAC. Those serious cases are what made him jump at the chance to get vaccinated.

“You have your choice to get the vaccine or get the virus,” he said. “It’s so prolific now that it appears to be a matter of not if you get the virus, but when, particularly the way it’s spreading. I’ve transported too many sick people, young and old, healthy and not, that have had horrible life-altering experiences and I don’t want to go through that.”

Lawless appreciates living in a mask-compliant area and doesn’t want to see anyone get complacent and experience what is happening around the country where hospitalizations in some cities are overwhelming the medical system like they did locally last spring.

“We only have three tools in the toolbox to not get this virus,” Lawless said. “Every other tool is when it’s too late. We can wash our hands, social distance and wear a mask. Those are the only three tools we have and it’s not too hard.”

Sheryl Braun of Scarsdale has a very long title — director of corporate and community engagement in the office of development at Montefiore Medical Center and Einstein College of Medicine in the Bronx — that can be described best as leading the hospital and academic center’s fundraising efforts. As she is not on the front lines she has worked at the hospital on an as-needed basis, now typically two days a week, but as important as her job was in February 2020, it took on a whole new role and meaning once the pandemic hit.

Braun was still in charge of her normal duties of working with donors, but she expanded to “in-kind donations,” which she proudly described as “everything from pizza pies to PPEs.”

Serving the “most underserved” population in the state in the epicenter of the pandemic meant that Montefiore dealt with 23% of the state’s cases.

“For me to be able to say I had a hand in helping my colleagues get masks or gloves or sanitizer or even a nice warm meal or warm coats that were donated by a large corporation to give out to the community — that’s everything,” Braun said.

The lines at Montefiore’s Project Bravo food pantry on Bainbridge Avenue, where Braun volunteers often, increased tenfold. Included were some familiar faces — hospital staff who were furloughed. “They could no longer make ends meet or were suffering from food insecurity,” Braun said.

Braun said the hospital and the food pantry still need help and anyone interested in making a donation of any kind can contact her at sbraun@montefiore.org.

“The community, and particularly the Scarsdale community, has been incredibly supportive and I am really grateful that I live in a community of such philanthropic people,” Braun said. “I could give you a million heartwarming stories.”

With group 1b, which included anyone who works in a medical facility being added as vaccination eligible on Friday, Jan. 8, Braun got a call from work Sunday, Jan. 10, and received the Pfizer vaccine at Montefiore two days later.

“I feel very privileged that I am able to get the vaccine this early,” she said. “It’s the right thing to do.” She added, “I was surprised how quickly it happened.”

Braun hopes to see others elect to get the vaccine as soon as possible, hoping to get “some semblance of normalcy” by the end of the summer.

“We are not out of the woods and now there is this new mutation,” she said. “This virus is cruel because it affects the Black and brown community more than it does the white community and the undeserved communities always have an issue with public health and access to health care. Even if we reach herd immunity and people are healthier, the economy is not going to bounce back in such a quick way where people are going to have the financial stability that they had pre-pandemic. Our jobs are not done just because we reach herd immunity.”

Moderna CEO Stephane Bansal said Wednesday he does not expect SARS-CoV-2 (COVID-19) to go away; rather, it will likely continue to mutate and become an endemic disease more like the flu, which could require annual vaccination. Though grateful for the current vaccines, Skolnik said what is now on the minds of many: “I think people should get it, but I wish there was a cure for this.”

The vaccine distribution was to be organize better. After the initial in hospital and nursing homes the vaccine was better to coordinate with clinics and physicians, since the majority of seniors have Medicare and a Primary care Physician. The true sick old people remained at home and is not going to go to places such as Westchester County even if able to get an appointment