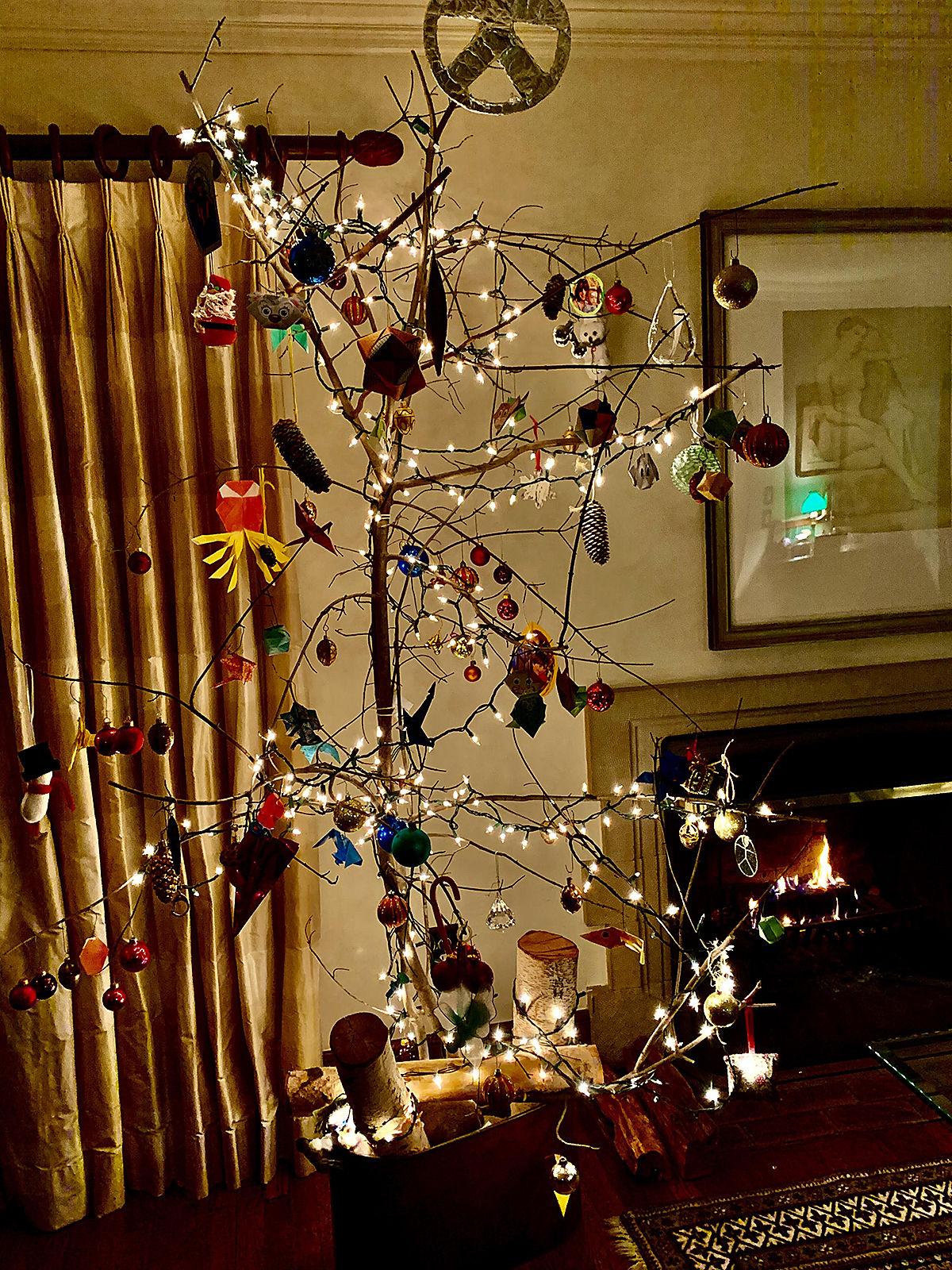 A branch brought home by the Yellen family is decorated with lights and origami each year for their winter solstice celebration. Elaine Yellen at home with her grandson by a tree branch decorated for solstice.

The winter holidays are known for celebrations with friends and family — celebrations that can take a variety of different forms. Most Americans set up Christmas trees or Hanukkah menorahs, but others take a different approach to the holiday season. One such family is the Yellen family of Scarsdale. Each year on Dec. 21, they celebrate the winter solstice at their house on Chesterfield Road and anyone of any faith is invited.

Michael and Elaine Yellen were raised in traditional Jewish households but they both felt organized religion wasn’t for them. Elaine Yellen explained that for a while, she and her husband didn’t have a set religion. It wasn’t until their first child was born and she was looking into nursery schools that she found the Ethical Culture Society of Westchester , a nontheistic fellowship based on ethics. The congregation and its humanistic approach, Yellen said, corresponded with their family’s beliefs.

One of the observances championed by members of the ECS is the winter solstice, usually held on the shortest day of the year, to mark the seasonal pivot as short days and long nights give way to a gradual increase in daylight. The winter solstice is nothing new; solstice celebrations date back to ancient Rome. Around the world, different cultures have traditions to celebrate the solstice, from soaking in a bath full of fruit in Japan to catching the first rays of sunlight at Stonehenge in England.

As a service-oriented community, the Ethical Culture Society of Westchester collects hats/scarves/gloves/toiletries and puts the items into gifts bags for the homeless during the winter solstice season. This year the congregation of 65 adults and 15 children/teens donated 109 bags for the cause.

In addition, the congregation hosts an annual feast, but there are no traditional foods; it’s a potluck meal and recently has been trending toward vegan preferences.

Bart Worden, known as the “leader” of ECS Westchester, said many of his congregants have “homecrafted” solstice traditions that blend together the family’s diverse religious backgrounds. Among the local group, Worden said the Yellens have the most organized approach, since they’ve been doing it for decades.

Over many years, the Yellens have put their personal touch on the holiday. When their son was about 4 years old, the family went to Lever House, a landmark modernist building on Park Avenue in Manhattan, to look at the large Christmas tree on display, which was decorated in origami. When their son saw the festive display, he asked his parents if they could have a Christmas tree as well.

“When you have children this time of year, you want them to have something that is fun, where they get presents, and you have a reason to party,” Yellen said.

As a compromise, she said, the Yellens fashioned a winter solstice tree from a big, fallen branch they found in the woods. They propped it up at home and decorated it with origami they created together. Over the years, the family has collected more lights and decorations to dress up their seasonal tree, although the majority of their ornaments are handmade origami, including some created 30 years ago.

“Everybody, no matter how you celebrate, is basically celebrating the same thing, whether you do it with a menorah and potato latkes or a Christmas tree and eggnog,” Yellen said.

There is no winter solstice songbook, however, so Christmas carols sometimes make their way into the Yellens’ festivities. But an important ballad for the family is “Imagine” by John Lennon, because of the lyric “Imagine there’s no countries/It isn’t hard to do/Nothing to kill or die for/And no religion, too.” Elaine Yellen said the lyric is the perfect representation of what she and her family hope to create over the holidays; a place where anyone of any faith can come together and celebrate each other.

“One of the wonderful things about growing up in Scarsdale is that we all shared each other’s traditions,” she said, noting that community members have always been positive and inclusive when it came to her family’s celebration.

Since their children are adults now and have families of their own, Michael and Elaine said it can be hard for everyone to get together, so they have moved the celebration to start around Thanksgiving which allows more family members to join in. This year the Yellens’ grandchildren will celebrate a mixture of Christmas, Hanukkah and winter solstice as they blend together many different family traditions.

Even though it can be seen as just another passing of a season, winter is a time to be reflective as people spend more time indoors and nights are longer. Wolden said the Ethical Culture Society encourages people to use that reflective time to connect in a deeper way with their thoughts and emotions. “There’s something special about the world we live on,” he said, which is reflected in the winter solstice — a reminder of the ebb and flow of our lives.

The Ethical Culture Society of Westchester, at 7 Saxon Woods Road in White Plains, is a 52-week organization that meets every Sunday at 10:30 a.m. except for the Sunday of the winter solstice festival when they meet at 5 p.m.

Happy Solstice! Some of our traditions include turning off all lights, electronics in the house and celebrating the darkness. We light the fireplace and have a "favorite foods" picnic. On scraps of paper we each write one sadness from past year (regret, remorse, loss, frustration), and one HOPE for future. Then we take turns tossing them into the fire. Share if you want. If weather permits we'll light candles and do some caroling, trying to focus on songs with a theme of light and hope, some traditional Christmas songs and some not. ("Morning Glow" from Pippin is one of my favorites.) Most every culture of our past celebrates this time in one way or another and MANY religious traditions are born from solstice themes of honoring the rebirth of light and the coming of spring: lighting candles; evergreens and wreaths (circular to represent the cycle of nature's season); music, festivities and bon fires to "wake up the sun"; even ornaments on Christmas trees are rooted in native tradition of hanging fruit on barren winter trees as a symbol of hope for spring's return. Our greeting to all: Brighter days ahead!