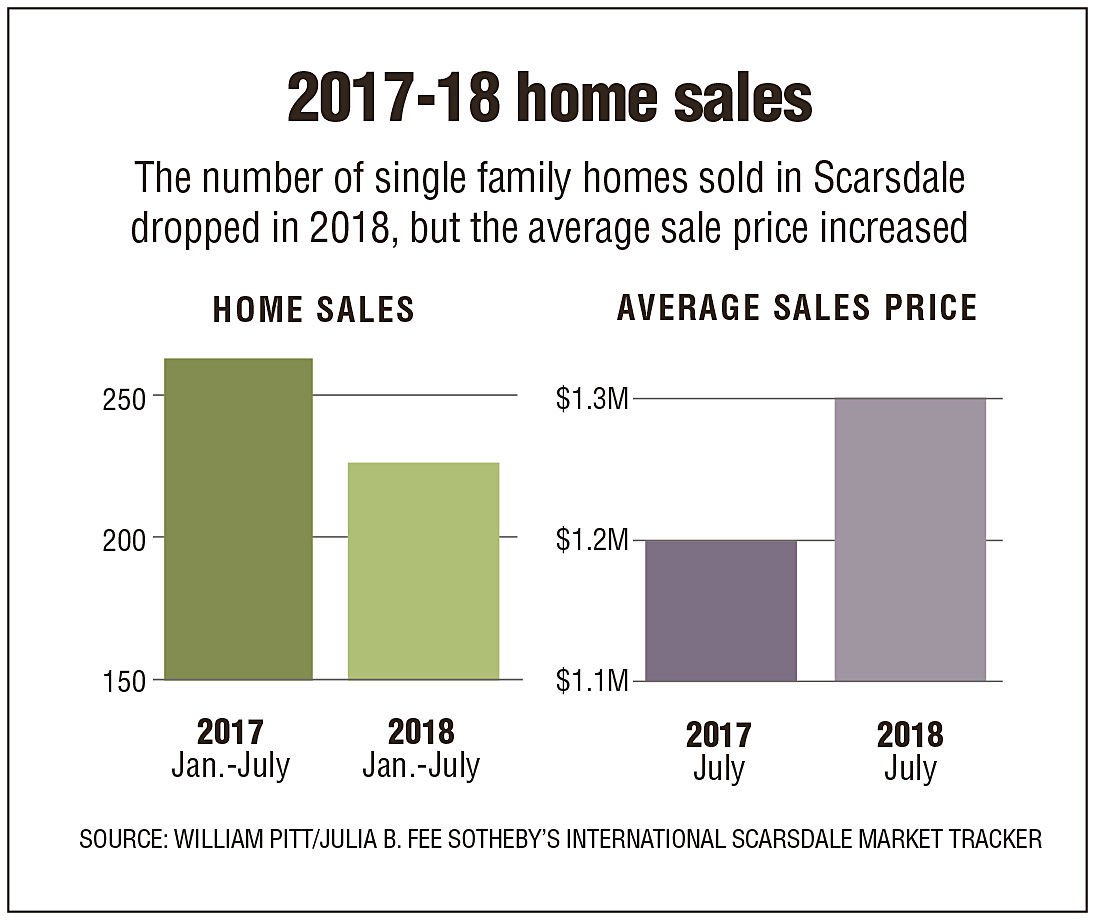 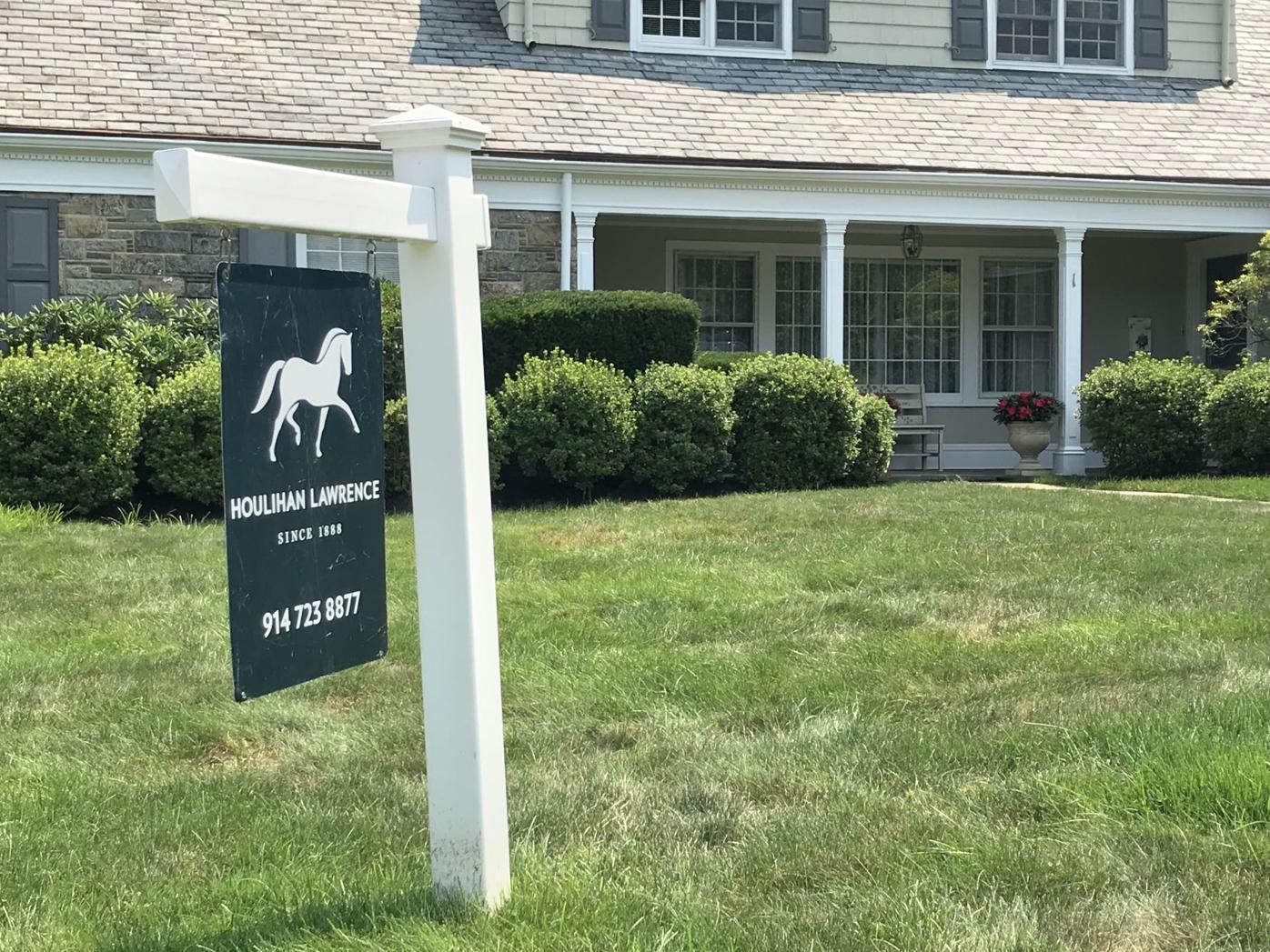 When changes to the federal tax code became a reality this January, capping state and local property tax deductions at $10,000 — residents in many Westchester suburbs could do little but wait to see the consequences emerge in their communities.

One of those consequences could be a drop in house sales.

Residential real estate sales in Scarsdale have taken a hit, according to data from two Scarsdale-based companies.

According to the Scarsdale Market Tracker from William Pitt Sotheby’s International Realty, 227 Scarsdale-area single-family homes were sold from January to July. This is down 15.9 percent from sales during the same period in 2017.

According to data from Popham Road-based Houlihan Lawrence, the company sold 125 Scarsdale houses from January to July. This is down 14.4 percent from the 146 houses sold during the same period in 2017.

While home sales are dropping, single-family home prices in the Scarsdale in July 2017 compared to July 2018 rose 7.4 percent to $1.3 million.

Mark Nadler, director of Westchester Sales for Berkshire Hathaway, told The Inquirer the effects of the new federal property tax deduction cap were not immediate. He said, after the changes in the tax code were announced, multiple people asked him how those changes were going to affect the housing market.

“It took until late April/early May before we started seeing a really pronounced fall off in traffic and activity,” Nadler said, adding there was also a slow down in the number of international buyers, specifically potential buyers coming to the United States from China, where there was previously a “heavy influence.”

Nadler said, while many people are blaming the decline in real estate sales on the cap on property tax deductions, not enough attention is aimed at the effects from the recent revaluations in both the village of Scarsdale and town of Greenburgh.

According to Nadler, people now have to consider paying thousands of dollars more in taxes due to a higher assessment and the inability to deduct more than $10,000 from those taxes.

Nadler added one of his clients has decided to sell his home and rent an apartment in Manhattan for two years.

He said it wouldn’t surprise him if more people decided to take this “wait it out” approach.

While William Pitt Sotheby’s International’s Scarsdale Market Tracker suggests a more than 15 percent drop in sales in Scarsdale from year to year, Paul Breunich, president and CEO of William Pitt/Julia B. Fee Sotheby’s, suggests there needs to be some context brought into the discussion about the Westchester market as a whole.

According to Breunich, property sales in the Westchester market did not take the 18 percent dive in the second quarter reported by Bloomberg News citing both Miller Samuel Inc. and Douglas Elliman Real Estate.

Breunich said the Douglas Elliman report cited in the Bloomberg article did not count data from the last six days of the second quarter, June 25 to June 30.

He said these days are the biggest closing days of the year.

Breunich said, according to his company’s research, based on information from the Hudson Gateway Multiple Listing Service, sales in the second quarter dipped just 5 percent from year to year.

Breunich wrote a letter released Aug. 10 rebutting the Bloomberg article, asserting sales in the Westchester market only dropped 3.7 percent from January to July compared to 2017.

Breunich said the previous articles connecting the reported decline in numbers could be politically motivated.

“The sky is not falling,” he said.

Breunich said the connection being made between the new tax law and house sales is far from tangible.

“From our perspective, it would be irresponsible to draw a firm conclusion on how the tax reform might shape the market for the simple reason that at this early stage, it is still impossible to know,” he wrote in the Aug. 10 letter. “These news stories are effectively contributing toward a perceived negative narrative about the state of the real estate market in Westchester County.”

After Breunich’s letter appeared in both The Wall Street Journal and The Inquirer Aug. 10, the Inquirer reached out to Miller Samuel Inc. CEO Jonathan Miller.

Miller, the author of the Douglas Elliman report, acknowleged he may have not reported the exact same numbers as the HGMLS, but said that’s because he combined the listing service data with other data sources.

Miller added, even if Breunich is right in his dispute of the reported 18 percent drop, the William Pitt CEO is not providing all the facts. For example, he said, Breunich does not mention there has been a year-to-year dip in sales over the last four quarters.

Miller said this is important because in the previous three years, the market was expanding.

So does any of this have to do with new tax law?

Miller said there is no evidence to draw a direct correlation between the new tax law and the current state of the market. However, he said, it is not “irresponsible” to suggest a correlation because the only major anomaly that occured in the last year is the new tax law.

Miller suggested some of the dip in the market could have something to do with higher interest rates, but he said rising rates have never had an effect like the current drop in home sales.

Miller said he believes it’s important to provide the consumer with all the facts.

“Bring all transparency to the consumer and let them decide,” he said.