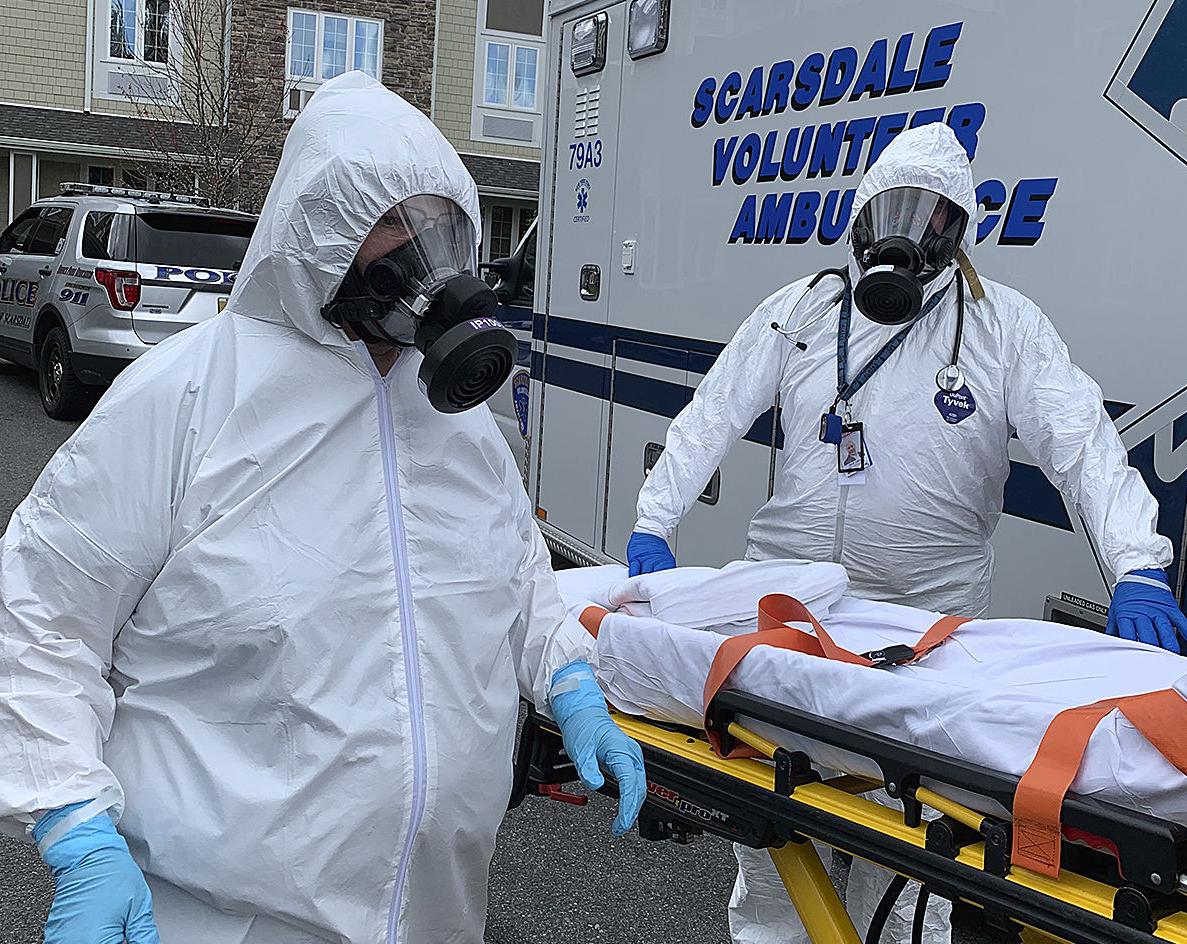 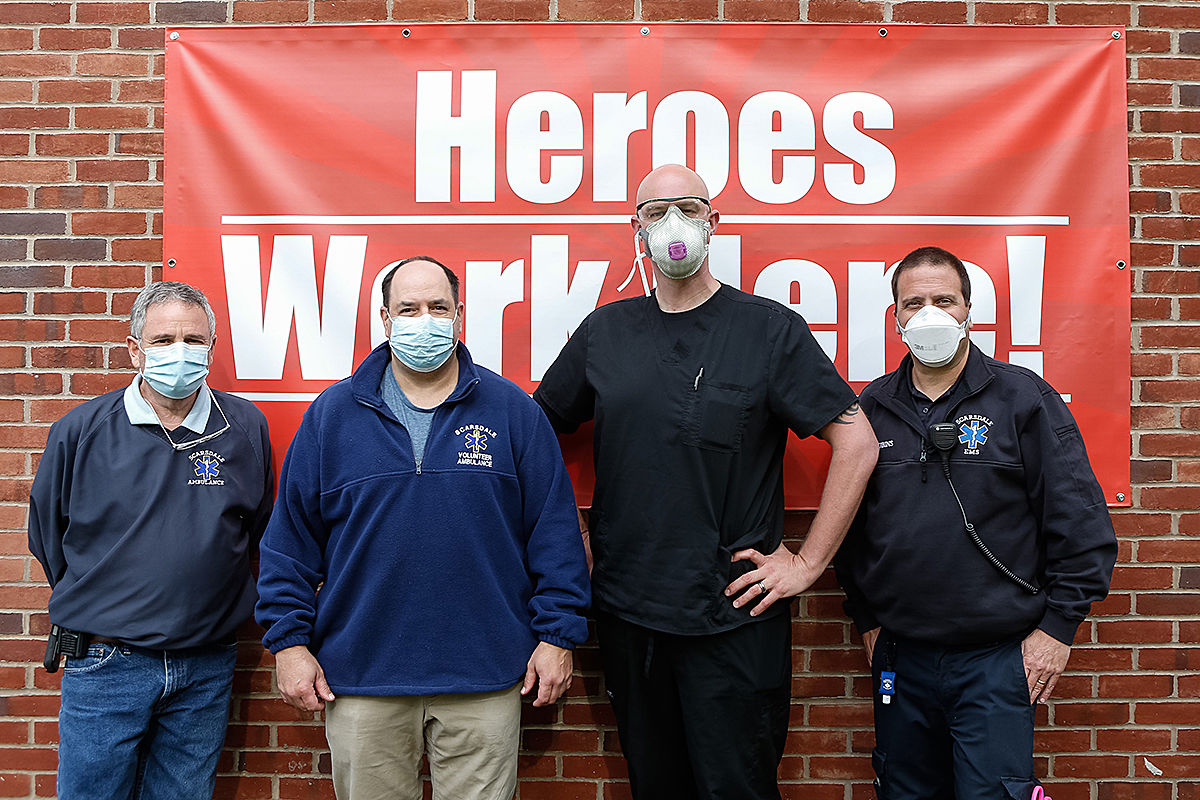 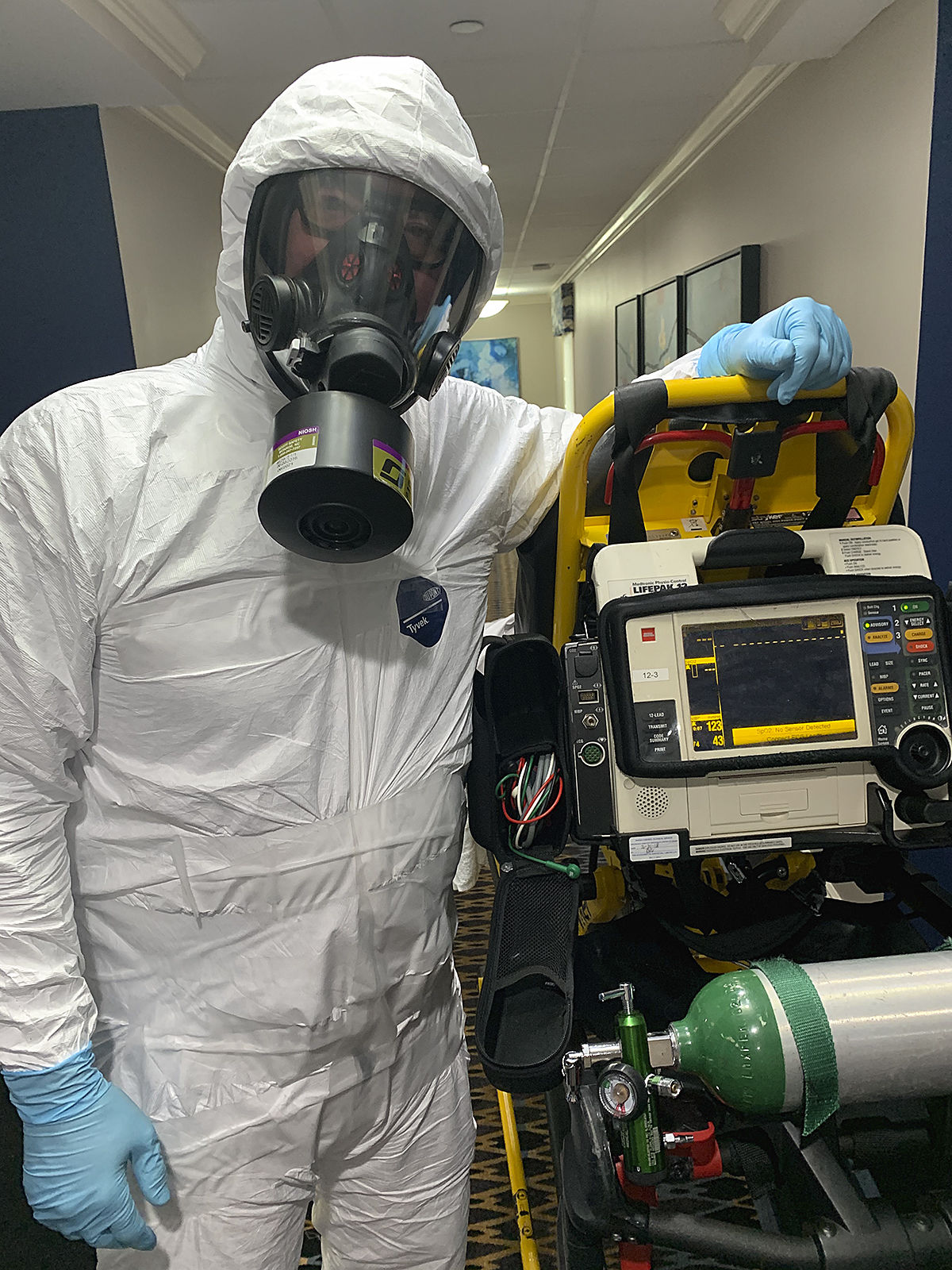 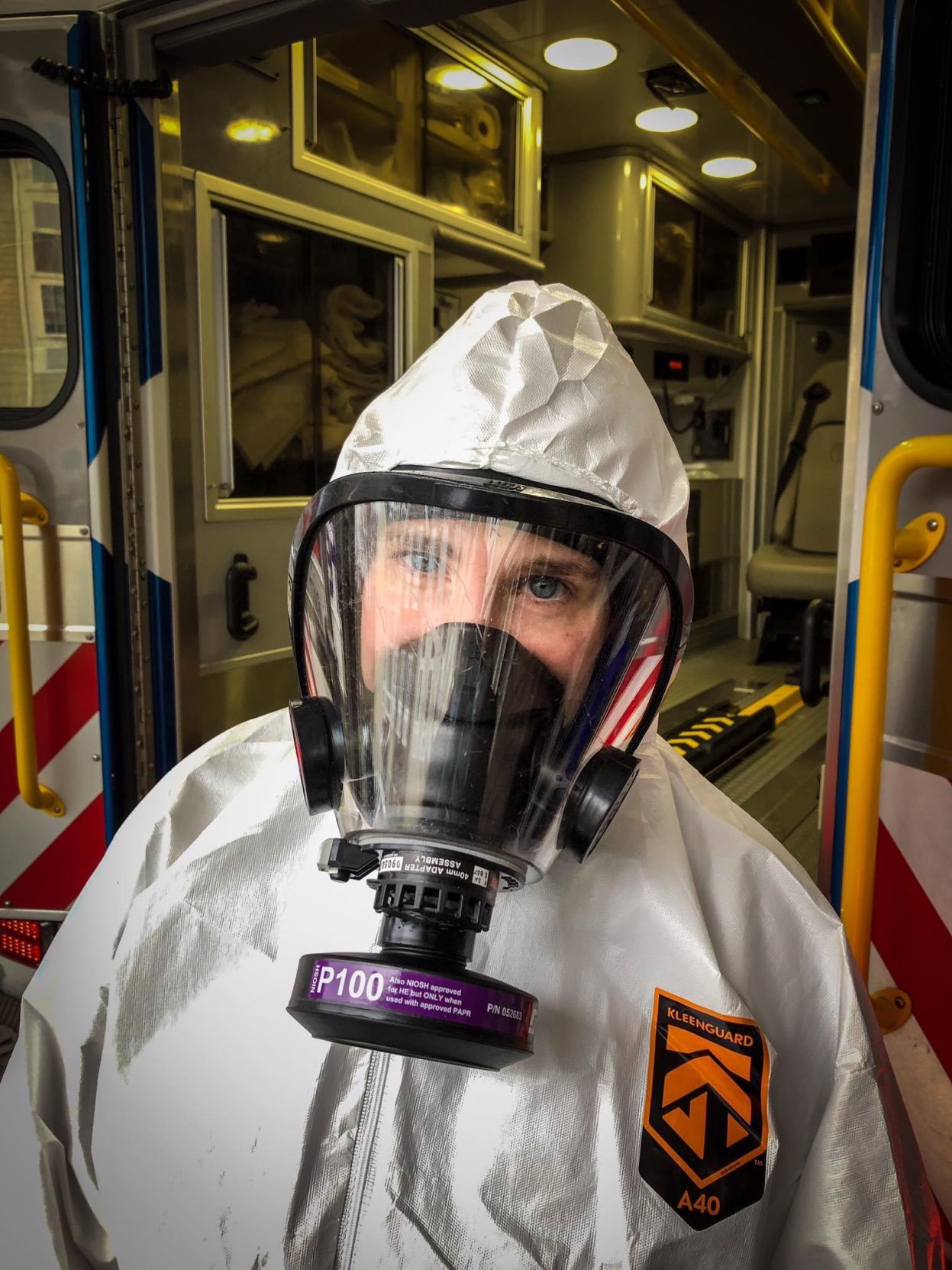 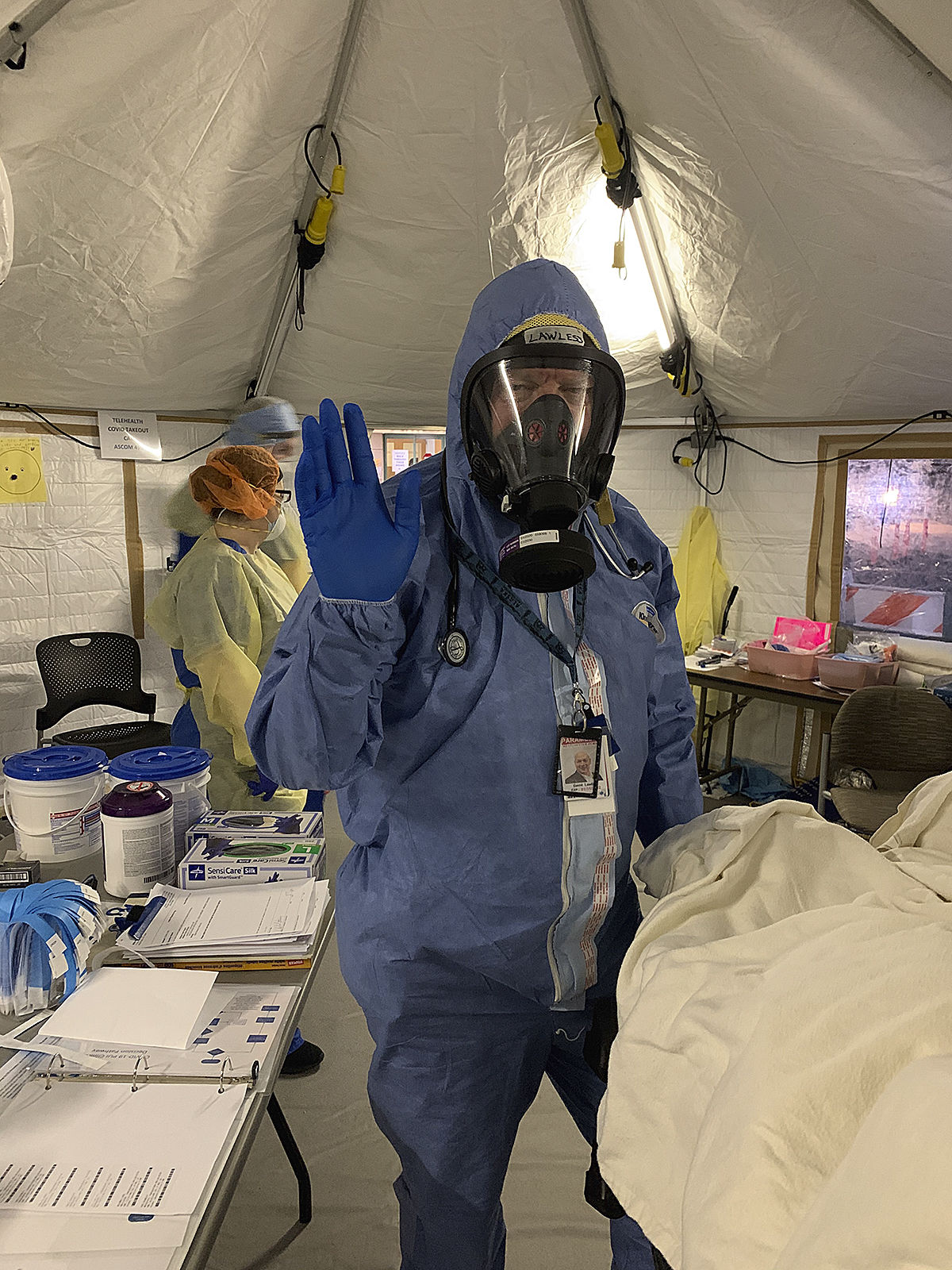 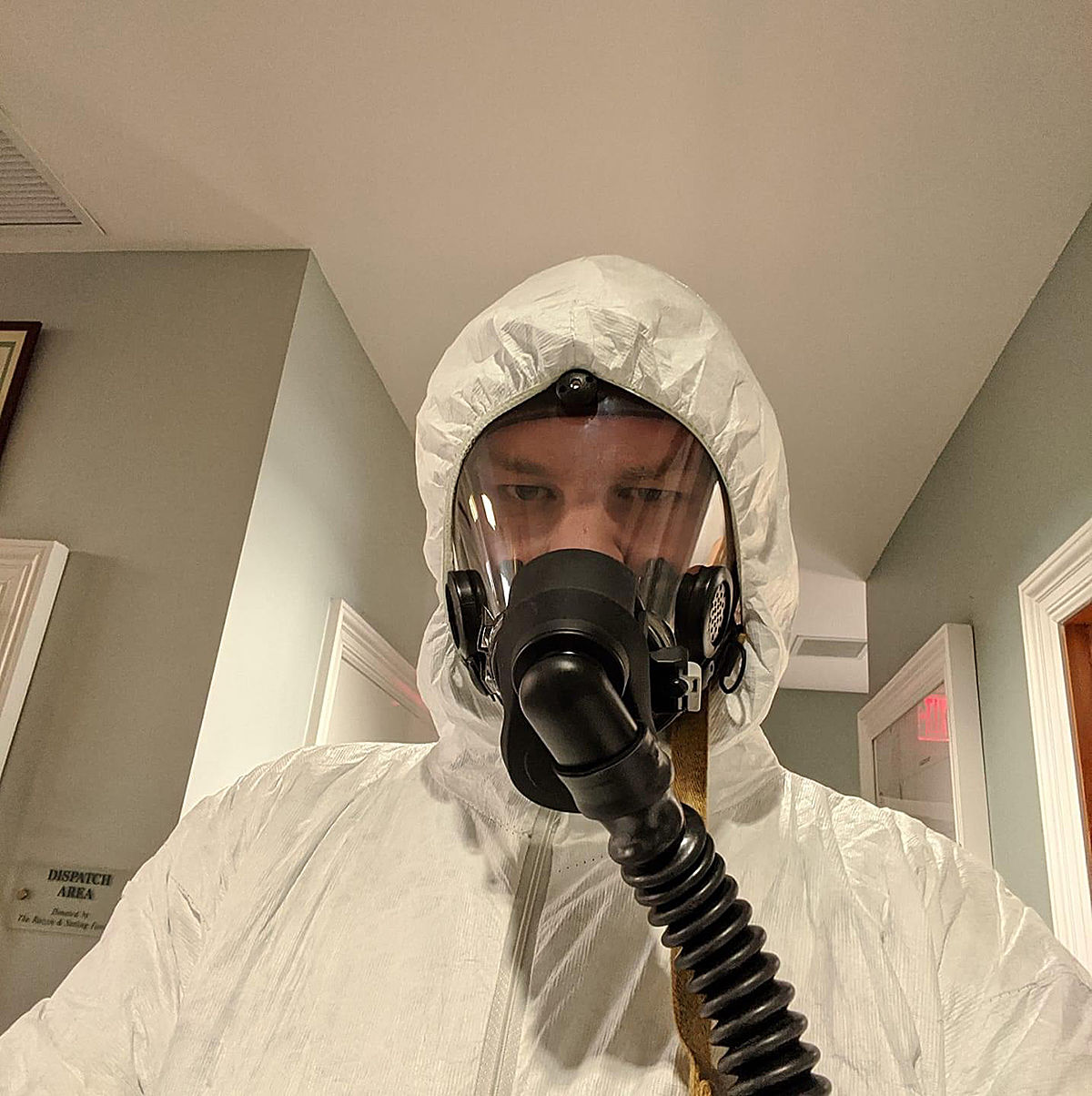 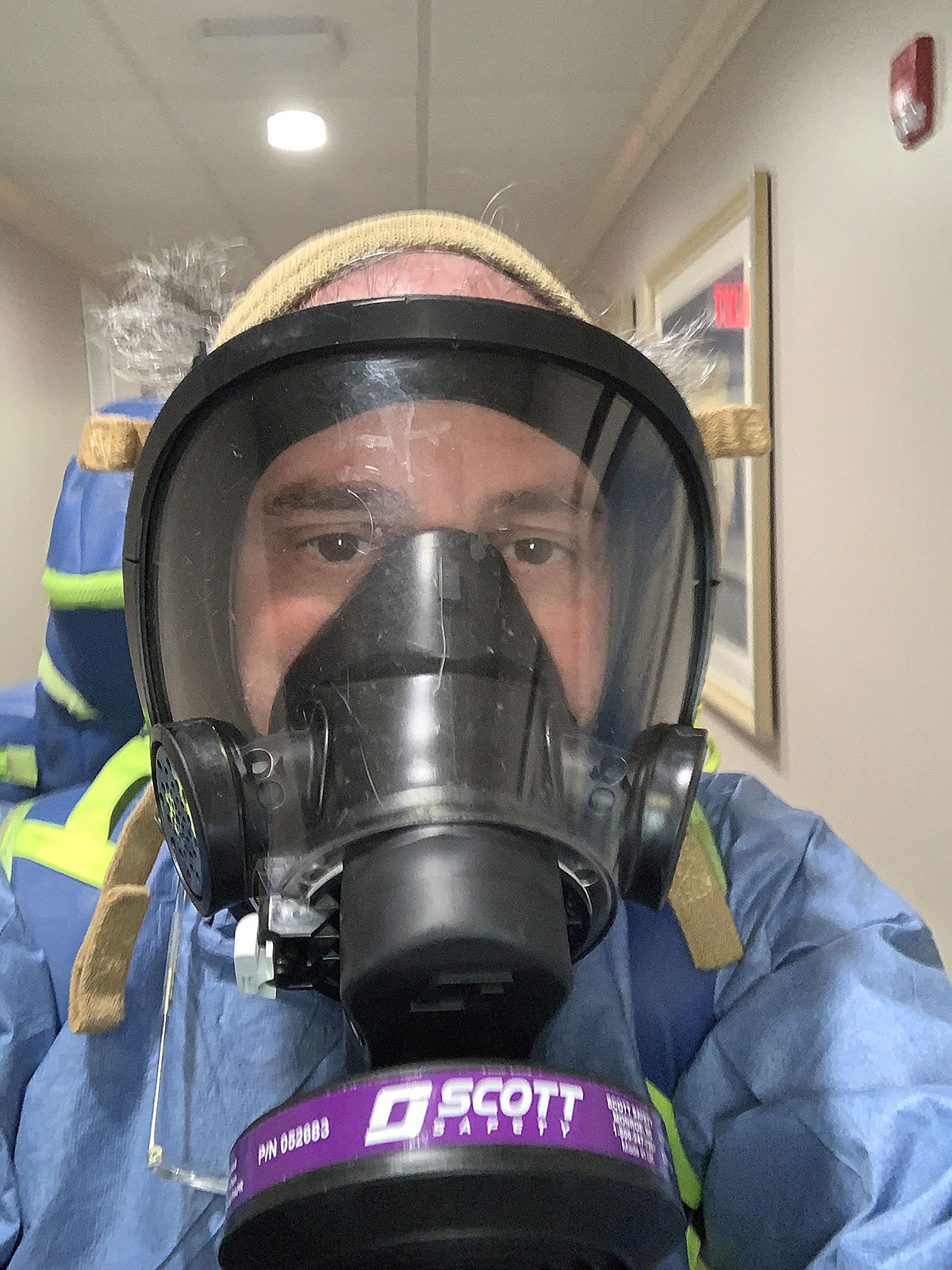 As fear and uncertainty spread along with the COVID-19 virus throughout Westchester County in March, schools shut down and the state went into lockdown, but one group of Scarsdale residents was busier than ever.

The Scarsdale Volunteer Ambulance Corps (SVAC) had its busiest two-month period ever as it met the challenge of the pandemic head on. They were prepared, they were ready, they were pushed to the limit in terms of resources, but they were there to meet and respond to every single call.

SVAC President David Raizen has been working as an EMT for 44 years, including 26 as the head of SVAC. When asked if he has ever seen anything like this before he didn’t hesitate to answer.

“Absolutely not,” Raizen said. “We had a lot of cases and sadly a lot of fatalities. We had four DOA (dead on arrival) in one day. That was the worst.”

Raizen and his SVAC team were able to handle the onslaught and respond, though it was overwhelming to witness firsthand as the pandemic swept across the county and the country and the world.

It was not just the volume and sheer numbers involved. This was something new that they had to learn to respond to. And while doing all they could to help patients, they also had to take into consideration the risk of contracting a deadly virus that they could potentially bring home to their families.

“We were pronouncing people dead in this town at a very alarming rate, some of them were people we’ve known for a long time,” said advanced EMT Jim Gross. “If we have one person die in a month that’s a normal month for us, we had 13 in a week. We had three or four ambulances out at the same time, just super, super busy. And it wasn’t just that the volume was high, it was scary. We didn’t know how deadly it was, how contagious, how to protect ourselves, every call we went on — would we get our children sick? And the volume kept picking up.”

Even the most veteran corps members admit this was something different than all the other emergencies and accidents they might have had to respond to over the years.

“In 27 years of doing EMS I’ve never seen anything like this,” said paramedic Jim Maher. “There were three or four weeks where we did nothing but COVID calls. I haven’t seen so many critical patients and dealt with so much death in a short amount of time as I’ve done in one month with this virus.”

It became clear from the start that this was something different for the first responders. They had to adjust protocols for every call that came into the corps. They had to take care of themselves as well as the patients, and everyone was treated as a possible COVID-19 case.

“We assume [COVID] for everyone and we’ve been very careful, super careful how we manage it,” said EMT Scott Rubins. “I’ve never seen anything like this, a surreal experience. For a while, every call was the same, elderly person, difficulty breathing, high fever, over and over again. I didn’t know what this was going to be like, but I had no idea it would be like this. There were days we had seven calls back to back, three or four crews running around nonstop, [crews] passing each other in ambulances. It was crazy.”

First responders, ambulance corps and hospitals around the country have faced a crisis trying to respond to the COVID-19 pandemic. However, SVAC was prepared and ready. The volunteers at SVAC were able to cover each call with three or four crews available at any time to respond. SVAC did not need to send out a single request for mutual aid assistance from other communities, while at the same time Scarsdale was able to assist other municipalities on mutual aid calls.

SVAC had trained and was able to avoid any shortage of PPE (personal protection equipment), which helped the corps protect their own health when answering calls.

“Our team has been unbelievable,” explained Raizen. “We’ve had no problem covering it and we answered every call. We had done training for Ebola and we had equipment in stock and added more as needed. We went to the extreme with full face masks and PPE very early on, and so far no one on the crew has gotten sick.”

Still, it’s hard to prepare for what was about to happen as the pandemic hit home.

“With the training for Ebola and swine flu, none of that materialized, so it was in the back of our minds that, OK, this virus is a thing that might happen, you’re prepared, but suddenly neighbors of ours were dying,” said Gross.

The volume of calls has finally started to subside as the number of cases decreases in SVAC’s coverage area.

However, the crew has seen how bad it can be and they are not about to let their guard down.

“People have a lot more questions than answers,” admitted Maher. “A lot of people ask me what’s my take on it and I say this is nothing like the flu. This is vicious. It kills people pretty quickly. It’s destruction of red blood cells, it’s vital organs that are failing. There’s a lot of unknown, and it’s frightening.”

What they’ve seen in hospitals is enough to convince Rubins that we are not out of the woods yet with this virus.

“It’s interesting to see the X-rays of people’s chests; it’s so different than the flu,” said Rubins. “You talk to people who work in the hospital and see and understand what is going on, it’s devastating.”

And on top of the serious nature of the virus and the sheer volume of the calls and work to be done, the emotional toll has been high for the crew.

In the past, the ambulance crew had often been the first contact for family members dealing with the stress of an ill loved one being taken to the hospital. They would try to reassure the family that everything was going to be OK, and the family would then follow them to the hospital.

All that has changed with the coronavirus.

“The first three or four weeks, it was mentally and physically exhausting,” explained Maher. “For example, you get a call where a patient was sick and in just a couple of hours they are barely breathing, you’re rushing to get them on a stretcher and to the hospital, and you have to explain to the family [that they] can’t come to the hospital. If the patient survives the trip, they might go on a ventilator and they could die, and the family that is with you, right there as you’re taking them away, may never see them again. It’s been like that on a lot of calls. That’s stressful, that’s really hard.”

While the crew has done its part to help the town make it through this pandemic, they are quick to point out one thing that has been very helpful — the outpouring of support they have received from the community. The flood of gratitude has ranged from a large banner on the side of the ambulance corps building that reads “Heroes work here” to copious donations of food have come in handy when the crews are running from call to call without a chance to stop to get something to eat.

“The community support has been incredible,” said Maher. “I don’t think there was a shift for like a five-week period where we had to go out and buy our own meals because people have been dropping off full meals for us. It’s been really, really nice, and greatly appreciated.”

Another example of support for the corps is the number of people signing up to take the EMT courses necessary to become a volunteer. SVAC usually runs one summer course, but now they have three online courses filled with 96 people registered plus a waiting list.

And one thing the crew all agrees on, approaching this pandemic has been made easier for them because of the leadership provided by David Raizen.

“As much as places around the country are managing this as best they can, David helps make this village heal,” Gross said of Raizen. “He’s always a couple of steps ahead… It takes the right people planning in the right way, and it takes somebody who is in charge who knows how to make all of this happen, and for us that is David.”

After all they have been through the past two months, the corps members have a better understanding of what this coronavirus is and what they have to do to deal with it.

Looking ahead, no one knows what course the virus will take, but if a second wave were to come, the SVAC crews will prepare as best they can to be ready for it.

“This has kind of changed the whole feel of what we do. There’s a piece of this that was like hurry up, pack up, let’s go, all of that has changed,” said Gross. “Part of it was we didn’t know how bad and how quickly this was going to get bad, and how long it was going to stay bad, and we don’t know if it’s coming back.”

If it does come back, the residents of Scarsdale can count on their hometown heroes at SVAC to be ready to answer the call.