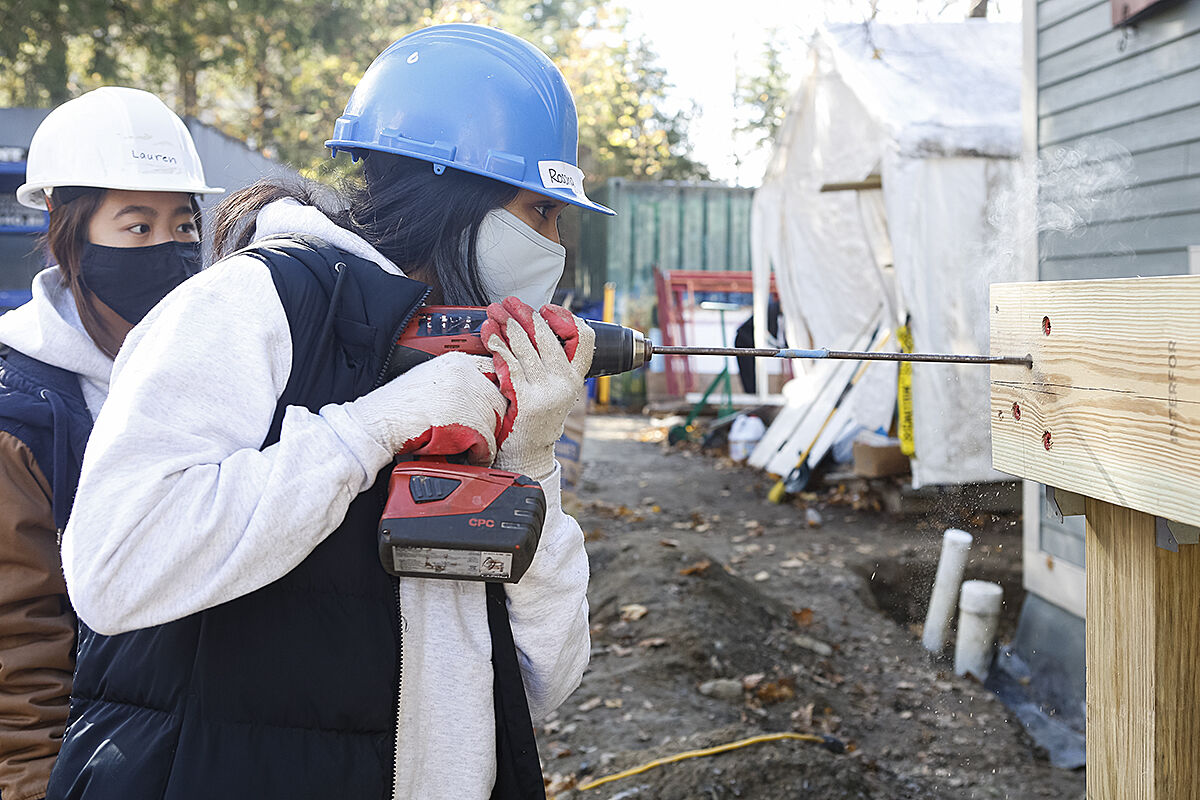 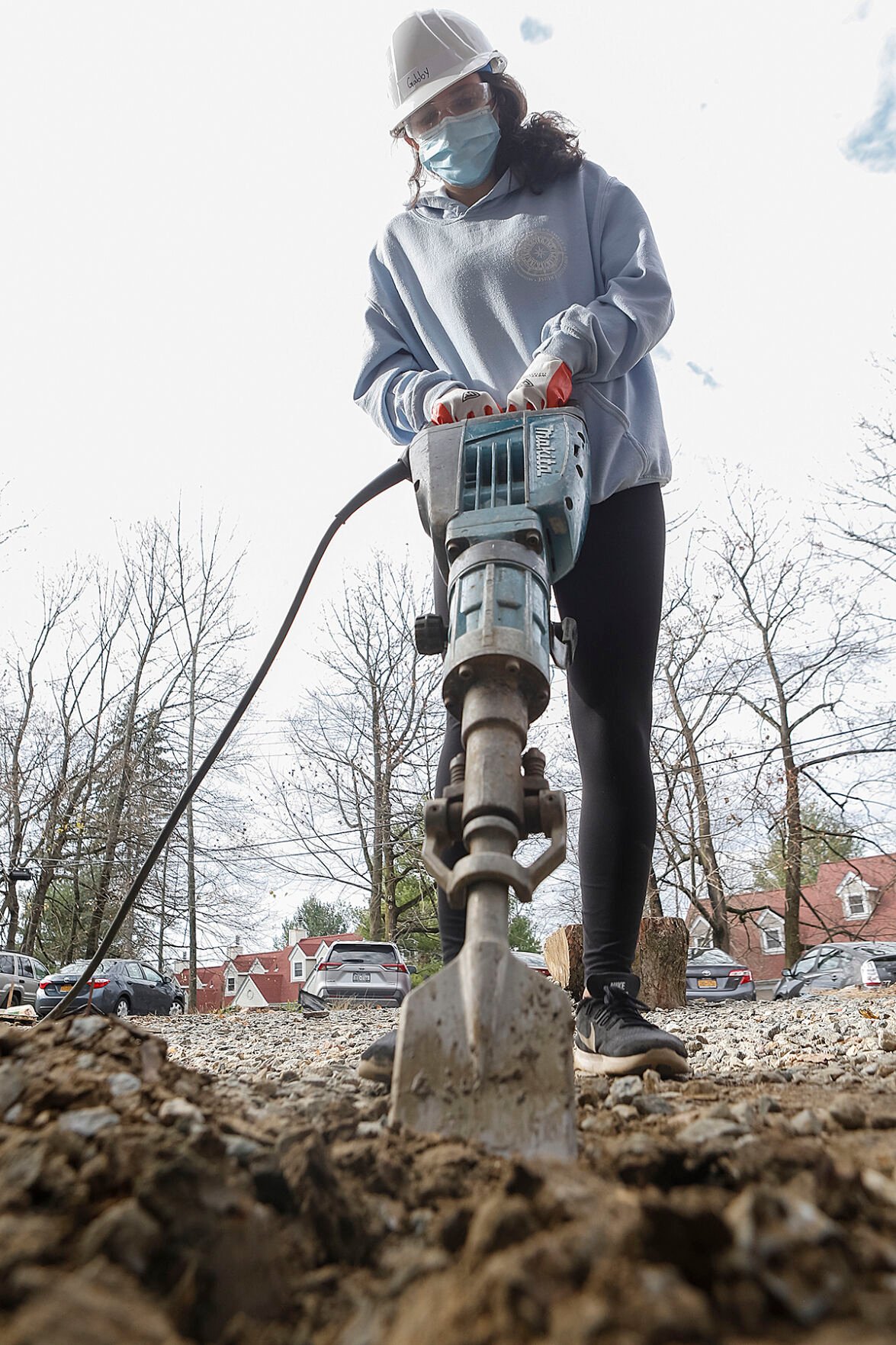 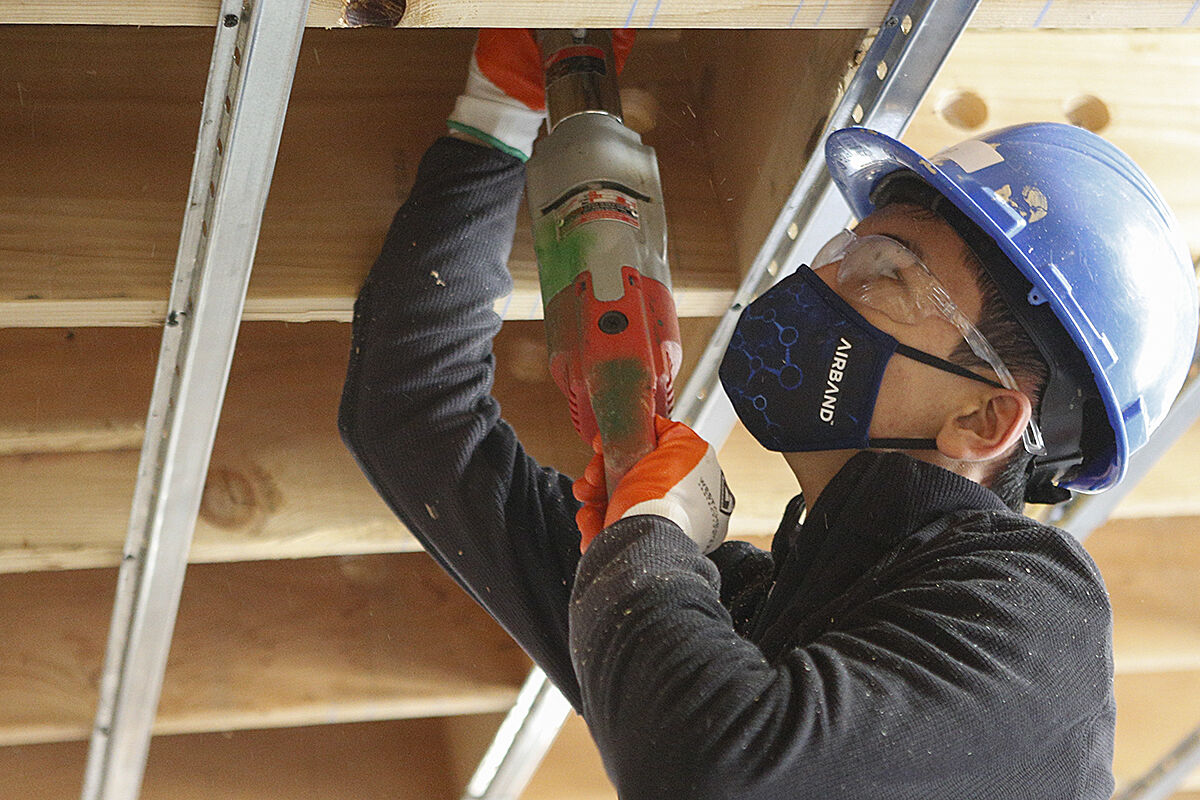 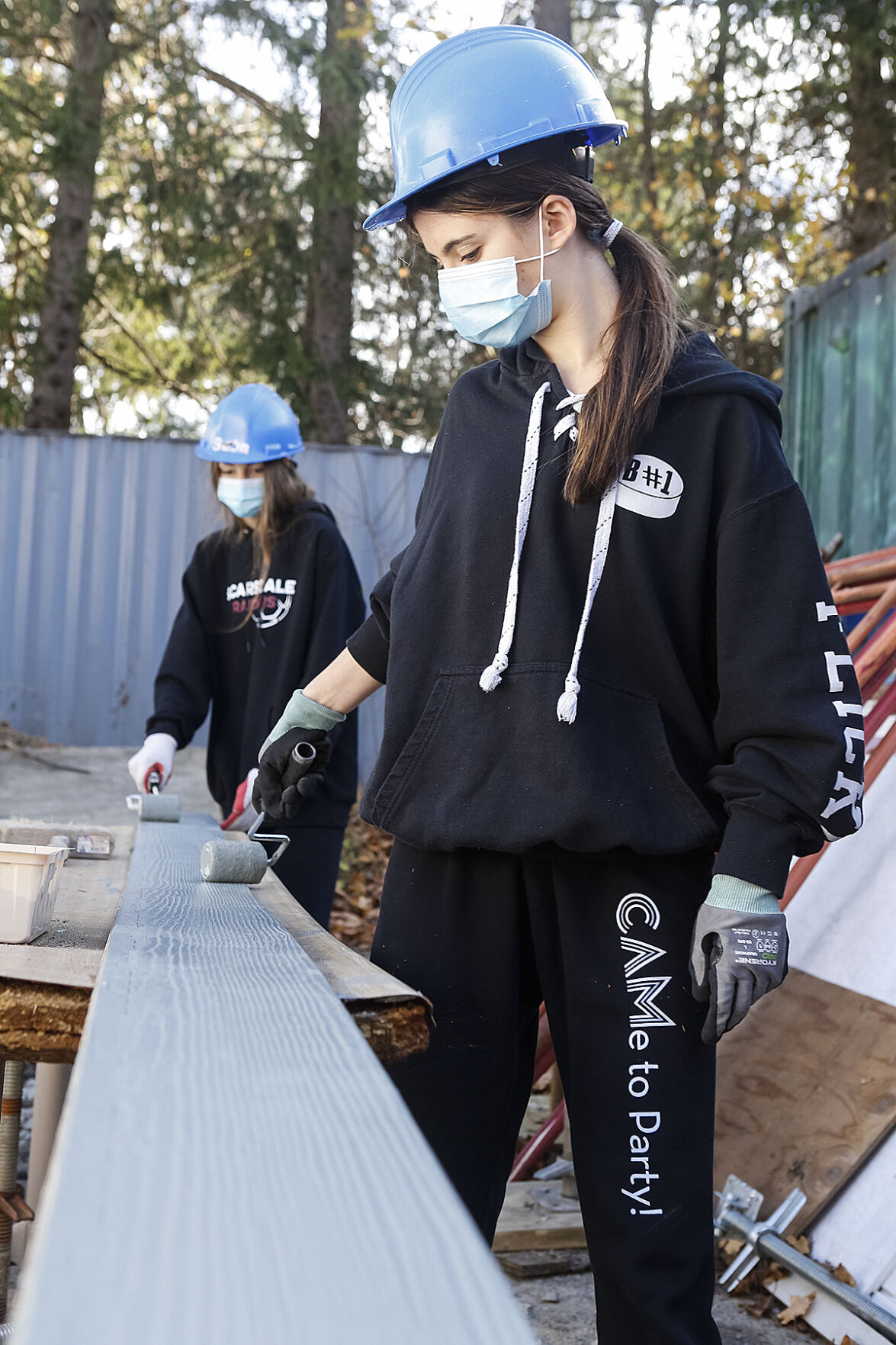 Sounds of jackhammers, circular saws and power drills filled the air, signaling this was a fully operational construction site.

However, under the hard hats and behind the safety goggles are teenage workers swinging the hammers and operating the power tools — Scarsdale teenagers to be exact, members of the Scarsdale High School Habitat for Humanity Club. It was a beautiful, sunny morning Saturday, Nov. 21, but there they were, donating their time on their day off, hard at work building a house in Chappaqua, one of several projects the club has been working on for four years.

For some of the seniors, this build is special. Their hard work has transformed the dilapidated historic house into a viable home.

“I love coming here,” said senior Rosana Sabur, co-president of the SHS Habitat for Humanity Club. “I love coming to an activity where you don’t know what you’re going to do, but you know you’re going to be helping your community or someone in some way, and you can see it. We’ve been working at this house for such a long time. Even last year, it was just frame work, you couldn’t see a house, but now you can see this is a livable space we are creating for someone in the community.”

Sabur and fellow senior Lauren Yuen were busy working the power drill last Saturday to rebuild the back porch, their enthusiasm and dedication shining.

“This is very out of the box,” said Yuen, the club secretary. “I chose this club because I feel it’s very different from other clubs. Especially now during the pandemic, it’s very important to support your community and be more involved. Many people lost their jobs and they’re losing their homes, so I really think it’s important to contribute as much as you can to your community. This [provides] a really good opportunity to do that.”

Many Scarsdale residents are familiar with the annual Gingerbread House making activity sponsored by the Habitat for Humanity Club each holiday season, but many would be surprised to see all the projects the club does throughout the year in various communities. In addition to the house in Chappaqua, they have worked on building projects in Scarsdale, Mount Vernon, White Plains, Rye, Yonkers and Bridgeport, Connecticut. They have worked on projects throughout the pandemic. They have helped produce Global Citizens Day at the high school, which features guest speakers and programs about social action and community service.

Scarsdale High School history teacher Heather Waters has been involved with Habitat for Humanity for 25 years, including the last nine at Scarsdale and the last six as the SHS club adviser. For Waters, the students participating in the club are living up to the school district motto of “non sibi,” Latin for “not for one’s self,” through their various projects.

“This is a great example of ‘non sibi’ in action,” said Waters. “It is boots on the ground community service. It’s always good to get our hands dirty helping our community. The kids have a great day doing something for others and we get a lot done. It’s always something different, which is cool for me and cool for them. They’re so positive and excited when they leave here. Even if they’re really tired after they’ve been shoveling stones all day, you can see how proud they are of the work they’ve done.”

Sabur and fellow senior co-president Jack Landless have both been dedicated members of the club for four years. In addition to Yuen, other officers of the club include Maya Gingauz, Zoe Aaron, Emily Aaron and Riddha Iyengar.

Waters explained the seven officers are the ones who run the club and make the decisions about the projects the group gets involved with. Finding new ideas and projects to help the community has been especially challenging this year due to the pandemic. But they’ve helped alleviate the county’s hunger crisis through food drives and working at food pantries with Lifting up Westchester, Westchester Food Bank, and the Community Service Associates’ soup kitchen in Mount Vernon.

They also worked on a community center in Yonkers, did a project with veterans for Veterans Day, and painted a women’s shelter in White Plains. They have been gutting houses and taking the salvaged supplies to a warehouse in New Rochelle where they raise donations to fund their construction projects. Another project they took on this year is making picnic tables and benches to furnish outdoor seating areas, which are in high demand during the pandemic.

The club has 90 members eager to help out, although the pandemic has made it more difficult this year for the group to work together and interact with the community; this year the club’s Gingerbread House making event, for example, will be completely virtual.

To maintain a socially safe distance while they work on-site, the club members work in groups of no more than eight and work in shifts at each construction site.

After four years they can finally see the progress they’ve made on the Chappaqua house. The foundation had to be redone so the students helped drill out the old one with jackhammers, then built a new cement wall. They put in new water lines and reframed the house. The next step is putting new siding up and installing new insulation and wallboard. All the drilling, hammering, measuring, digging, painting, everything that needs to be done — they’re on task and they learn as they go under the wing of on-site experts from Fuller Housing in New Rochelle.

“I didn’t know the difference between a hammer and a drill,” admitted Sabur. “Now today, I’m teaching someone else how to use the drill. You can always find something that you can learn to do.”

The seniors in the club take pride as they look back on where they started and how much they have learned.

“Honestly, coming into this I knew absolutely nothing,” Yuen said, “but now I feel I know bits and pieces that will be really helpful in the future. It’s a very good experience … and it’s remarkable to see what you can do… to see a year later how everything has transformed.”

Waters said safety is a top priority in training the students to take on a project, and no student is asked to do something they don’t want to do.

“Every time we try to have them do something new,” said Waters. “And they always stay in their comfort zone. We were at a place in Yonkers working on the roof. It was beautiful looking out at the river, but if you’re afraid of heights, you don’t do that. It’s always safety first.”

Each project proceeds step by step, Waters said, and each student walks away with a new experience, a new skill, and a sense of accomplishment as they fulfill the Habitat for Humanity mission of awareness, activism and action.

“I think any time you bring kids out into the community, either their own or nearby, it gives them a better sense of self and a better perspective on who they want to be,” Waters said. “At the end of the day, it’s such a positive experience for them.”