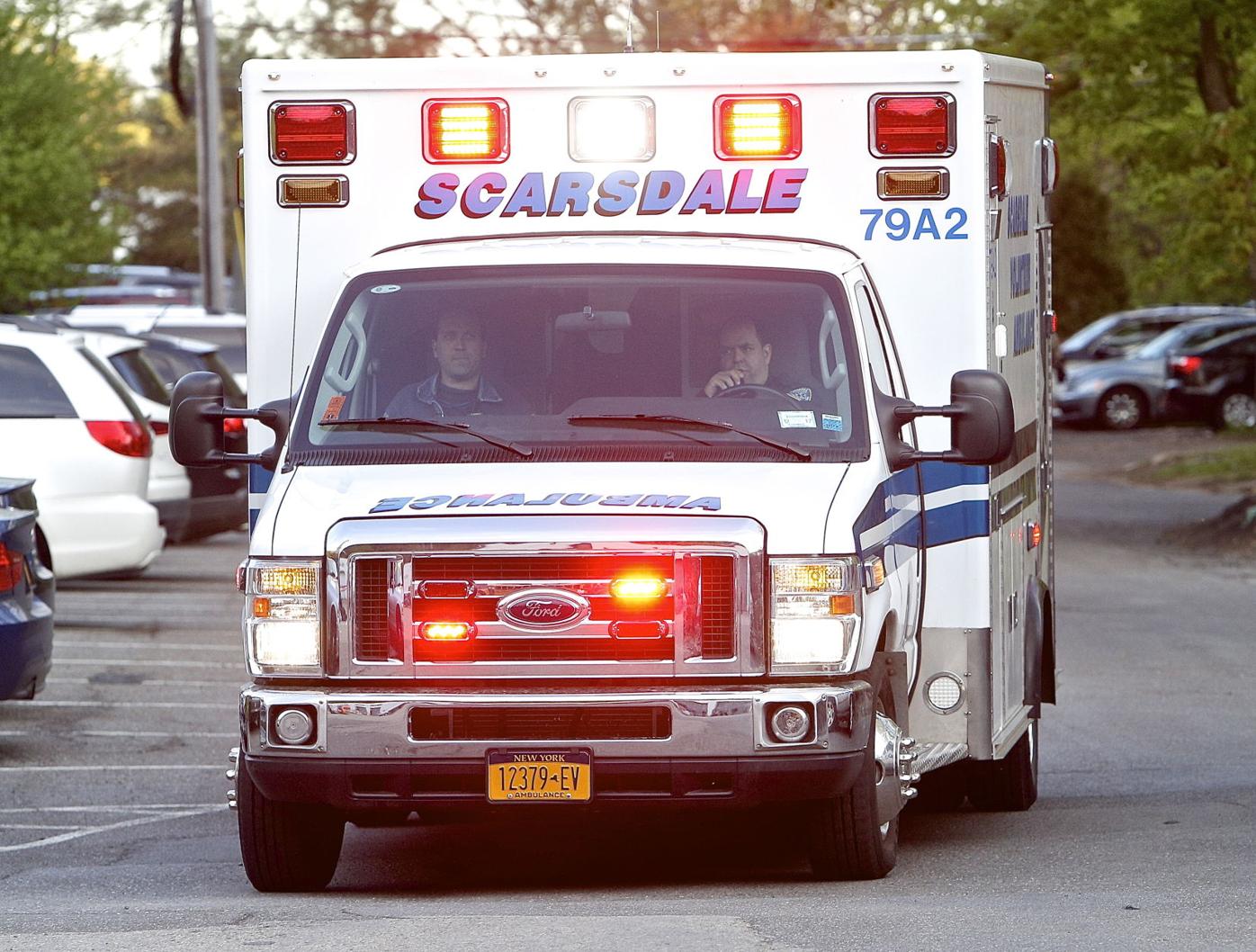 Corps members drive one of the three SVAC ambulances. 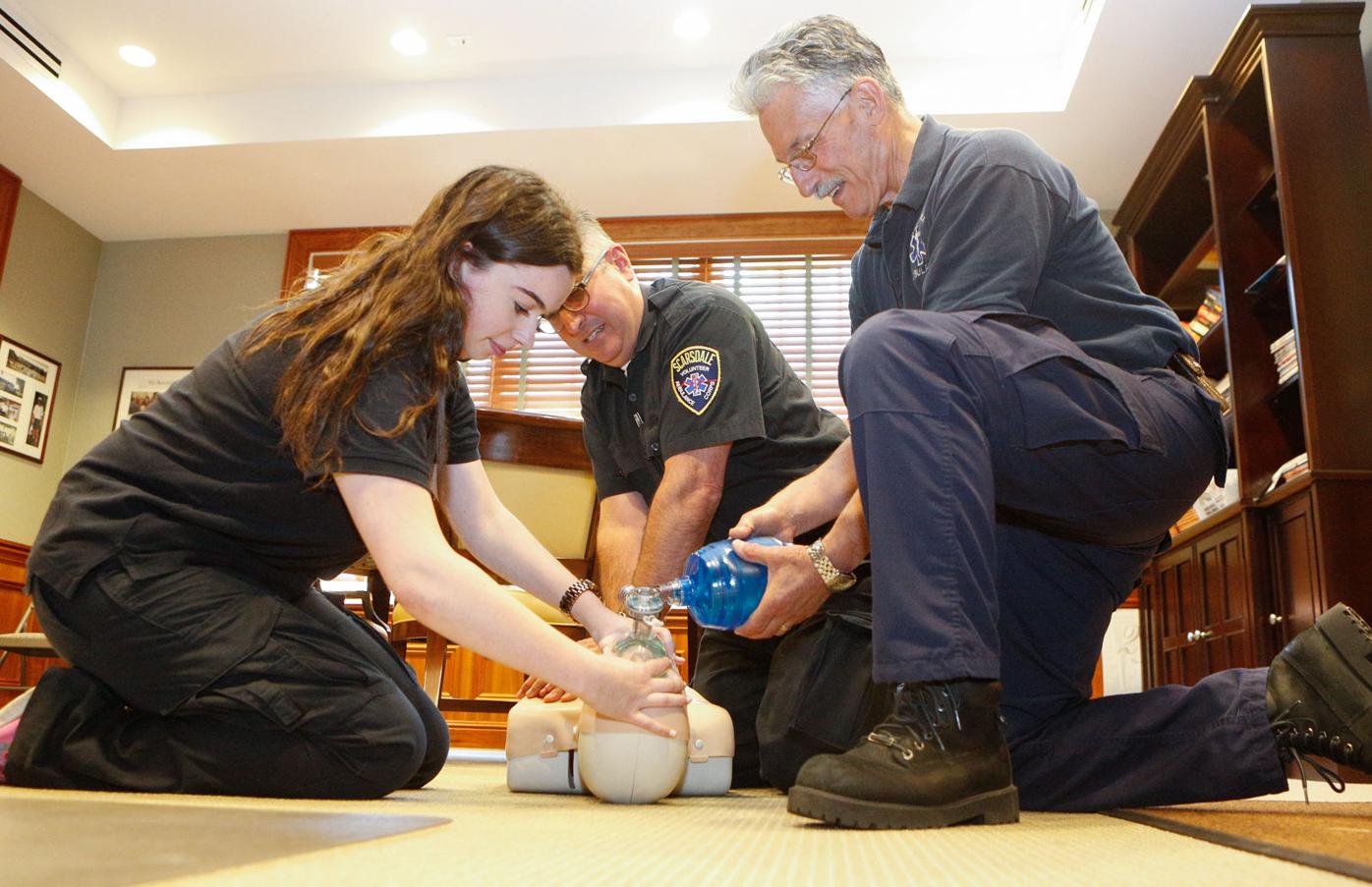 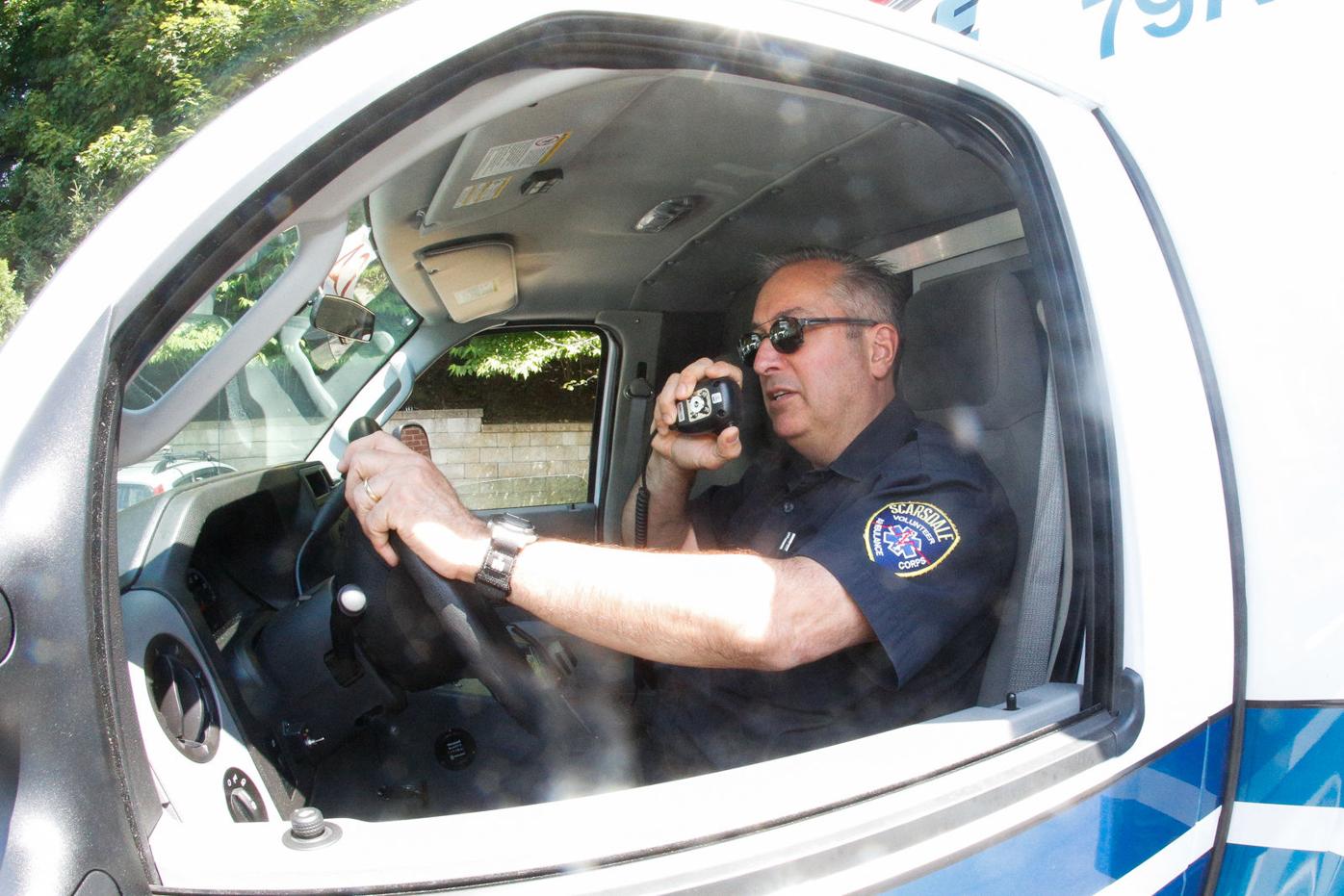 Behind the wheel, Buonamassa checks in with headquarters. 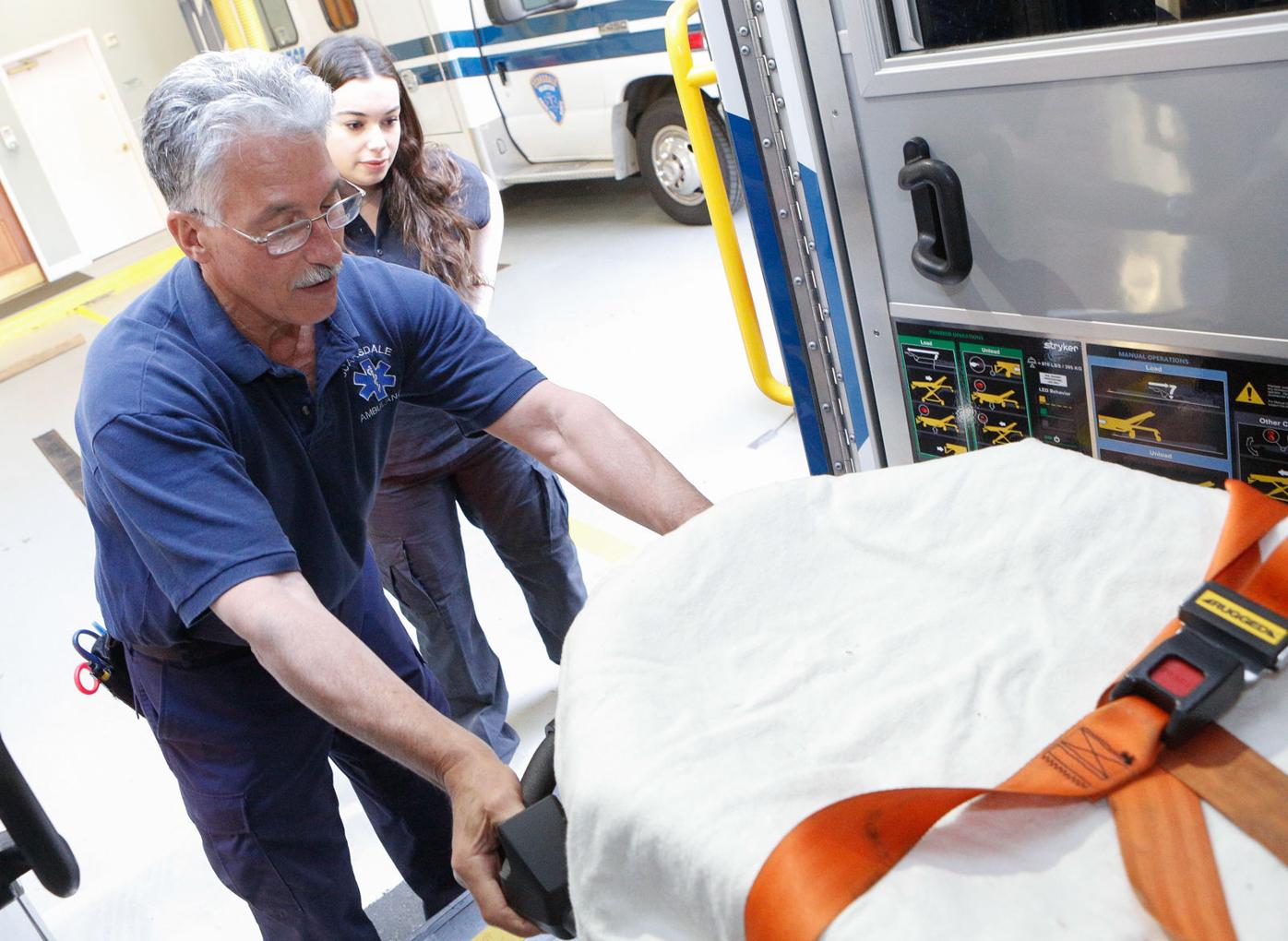 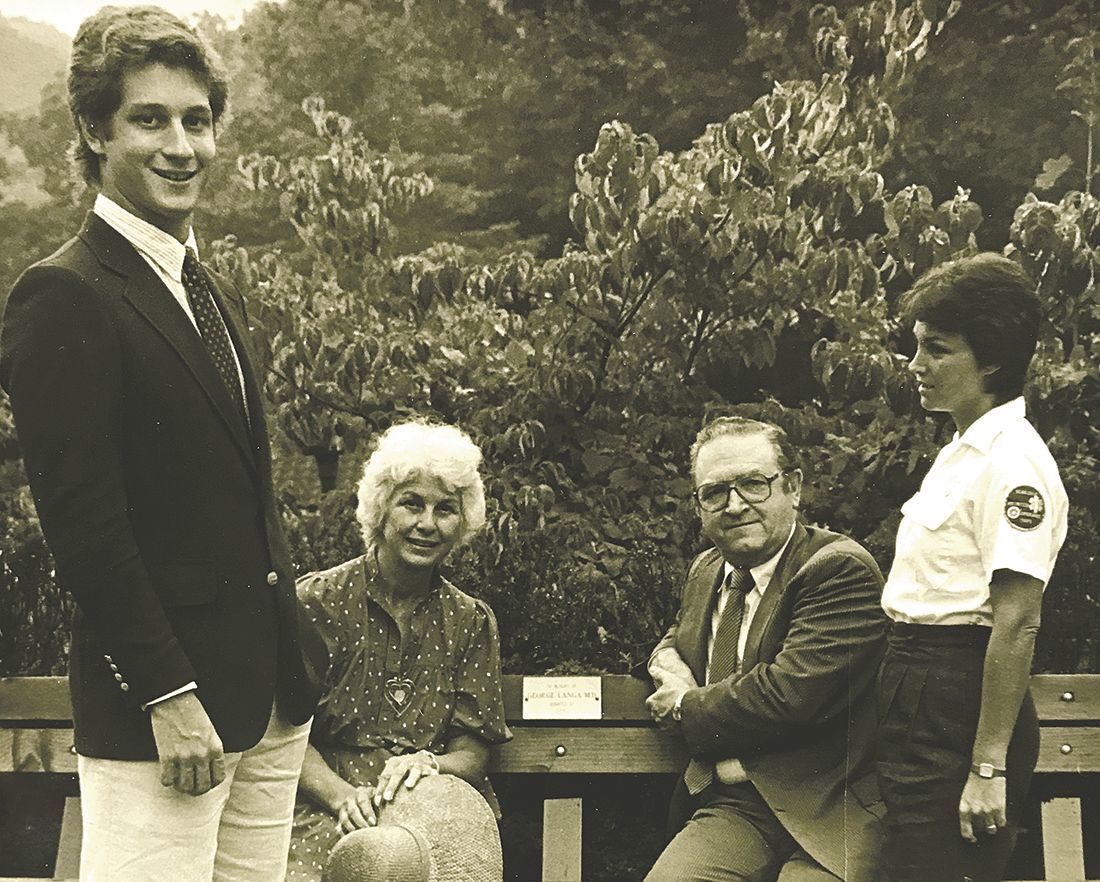 Corps members drive one of the three SVAC ambulances.

Behind the wheel, Buonamassa checks in with headquarters.

The first ambulance drove up to Scarsdale Congregational Church on Oct. 18, after being dispatched to a simulated active shooter drill. A team of roughly 45 volunteers representing ambulance corps from Scarsdale to Cortland immediately began hunting for victims. But the victims were volunteers too, with makeup and scripted to aid in the training of the first responders. Scarsdale police practiced onsite force protection while fire department personnel observed, and four professional EMS controllers were present to coordinate and monitor the drill.

Thirty actor/victims strewn from the church entrance to the pews appeared to be bleeding profusely. They had gunshot wounds — created with stage makeup — on their necks, heads and torsos.

The team ran the drill three times from 7 to 10 p.m., shifting roles from ambulance driver to triage officer and incident commander–in-chief, among others. Each time, both the number of victims and gunmen increased. In the third re-enactment, a third perpetrator emerged while responders were treating victims. While responders did not see the third perpetrator, they could hear him screaming in the hallway downstairs and firing at police. The actor playing the perpetrator used an actual handgun with blanks.

“It’s an intimidating[ly] real event, and it’s made to feel that way,” SVAC member David Lawless said. “We’re going to find areas of improvement [and] … areas of success. That’s the whole purpose.”

The drill is one of several new initiatives introduced by SVAC, the village’s resident ambulance corps for the past 48 years.

Since 1970, the corps has provided medical transport and services to Scarsdale Village and the surrounding area. But in the years since, the corps has expanded its menu of programs with more CPR and EMS classes and a Scarsdale High School Senior Options elective, in which graduating seniors train to earn EMT certification.

The ambulance corps was the first in Westchester to carry cyanide kits and fentanyl, and the first in New York State to allow EMTs to defibrillate patients. In 2012, it was on the frontlines of treating and transporting patients to White Plains Hospital in the wake of Hurricane Sandy. Its equipment includes active shooter, mass casualty and thousands of antidote kits, and the team’s average response time is four minutes.

Nearly 50 years ago, that kind of medical response was unheard of. The need inspired Scarsdale resident Donald Porter to create a free ambulance service in the village, operated solely by trained residents.

To help launch his vision, he turned to Dr. George Langa, an orthopedic surgeon based in Scarsdale, who became the corps’ medical director and Porter’s partner in recruiting and fundraising efforts.

“There was no organized effort to get people to the hospital other than the police department,” said George Langa Jr., who is also a certified EMT. “When there was a car accident or some sort of medical issue, you got into a police car and they drove you to the hospital.”

But not in an ambulance — in a standard station wagon.

“A car accident or something that was pretty severe [would happen] … and you got loaded into the back of a normal station wagon and were taken to the hospital with no medical attention,” Langa said.

SVAC president David Raizen confirmed the pre-corps history. “The police department did all of the ambulance calls,” he said. “They had two cars called stretcher cars and they were station wagons, and you rolled the stretcher in.”

For some time, the village debated whether to back a village ambulance corps or to continue relying on police for medical transport.

Ultimately, “the town government finally … said, this is what we need,” Langa said. “When people were having a heart attack and needed to be taken to the hospital, you didn’t want to just get in a car. You wanted a car that would provide you some kind of medical response on the way to the hospital.”

So, in 1970, Porter and Langa Sr. got their ambulance corps. Next, they needed volunteers — and lots of them.

Therein lay another problem. The corps was short on volunteers, as most men in the village worked full time and couldn’t take on daytime shifts.

Eunice, now 92, said her husband confided in her about the corps’ latest hurdle. “So I thought, why not women? They’re sitting at home playing tennis, golf and bored to death,” she said.

With that in mind, Eunice began a covert operation, calling women in the village and asking if they would drive the ambulance. Most were shocked, many excited. Her first handful of recruits signed up.

Next, Eunice stopped by the local pharmacy and asked the owner to donate Band-Aids® to the cause. She then strolled around the village, handing them out and recruiting passers-by for the newly minted corps. Another dozen recruits.

For the pièce de résistance, she enlisted a friend to sit in the village square on an open truck dressed as Betsy Ross, the feminist emblem of the late 19th century, best known for sewing the first stars and stripes onto the American flag in 1776. A popular slogan for Virginia Slims cigarettes, eventually rebranded to represent the women’s movement, was used to underscore every campaign — “You’ve come a long way, baby.” Eunice added her own riff, “Why not try this?”

By the end, she’d recruited nearly 100 volunteers, the vast majority of whom were women. Some participated in the auxiliary; others drove the ambulance, worked on the first aid crew and fundraised by hosting events and parties.

The corps’ first home was 300 Heathcote Road which, for many years, was used as a railroad station. The building was unoccupied, but desperately in need of repairs. “We had to turn it into a facility that would hold not only the reception room … but also a first aid training room, a recreation room for the staff staying overnight, a kitchen,” Eunice said. “We had to … make it livable.”

Porter and the Langas did much of the grunt work themselves. Even a young Langa Jr. helped his father with the painting.

After seeing the corps’ current facility — a nearly $3 million project (including $1 million seed money from the Milstein family) completed nearly 10 years ago — Eunice said she couldn’t believe how far SVAC has come since its beginning. “We’re thrilled that it’s survived and grown.”

In the last half century, SVAC has evolved from a small volunteer corps — with one ambulance and limited equipment — to a premier village-based corps, providing advanced life support 24 hours a day, seven days a week, 365 days a year.

Today, the corps’ primary territory includes the village of Scarsdale and Stratton Road North in New Rochelle. Still, 25 percent of the corps’ call volume is mutual aid, meaning it is dispatched to a community that is either too busy or otherwise unable to respond. “Everybody jokes we’re the hub of mutual aid,” Raizen said, noting the corps’ central location in the county.

Raizen, who started at the ambulance corps with fellow volunteer Steve Rambone at age 18, said his role differs daily, so it never grows stale. “I love doing it,” he said.

Rambone, who turned 18 six months before Raizen, was the first of the pair to officially take active runs, though Raizen admitted they squeezed in a few dispatches before then.

“We got sucked in,” he said, recalling a helicopter crash on the Bronx River Parkway. “I think you would’ve had to peel us away. There was no way we were not going.”

Through the years, Raizen has learned the community well, so much so patients often worry their medical secrets will become community gossip. “I don’t kiss and tell,” Raizen tells them.

That tongue-in-cheek humor is part of the job, in his eyes. “Ninety-five percent of the gig is keeping people calm,” he said. “The moment you lose it, so do they.”

PFA, or psychological first aid, is a big differentiator for a volunteer ambulance corps versus a commercial one, he added.

“The volunteer ambulance service is there because that’s what they want to do,” Raizen said, “the epitome of a neighbor helping a neighbor.”

Case in point, Raizen’s longtime Tuesday riding partner Lois Unger, who has since retired from the corps, once agreed to care for someone’s dog, since the patient refused to go to the hospital if the pup had to stay home alone.

“So here we are, with Lois running over walking the dog all night,” Raizen said. “It’s just different … People in Scarsdale don’t know how good they have it.”

This month, the corps kicked off its fundraising drive for 2019, which Raizen admits has been “lackluster at best the last few years.”

The corps’ primary source of funding is resident donations. Last year, the corps netted significantly less than it needed — roughly $250,000 from public donations — in its annual public fundraiser. One Scarsdale resident “bailed us out,” Raizen said, donating just shy of $50,000.

The secondary source of funding for the corps is soft billing. After dropping a patient off at the hospital, SVAC sends that patient a bill, charging the minimum Medicare rate based on whether the patient required advanced or basic life support.

The corps costs about $600,000 a year to run. The biggest expense under that umbrella is payroll; paramedics are paid $29 an hour, and someone is always on duty. The second largest expense is workman’s compensation, and the third is liability and malpractice insurance.

Grants are a big saving grace, Raizen said. Sometimes those come through successfully and sometimes they don’t.

The corps hopes to purchase four new defibrillators in the next two years, which cost $45,000 each.

“It’s a far cry from when I joined,” Raizen said. “In 1976, we were running ads in The Scarsdale Inquirer for people to donate refrigerators and couches because we had nothing.”

Those sentiments are echoed in Porter’s 1976 letter to The Scarsdale Inquirer, which reads in part, “When I first started the preliminary work in founding the corps. … there were many times that it looked hopeless but with the help of interested residents and many other people we pulled through the bad times to build the corps little by little … I urge residents to support the corps in every way they can … I congratulate … its officers and members and wish them continued success and growth.”