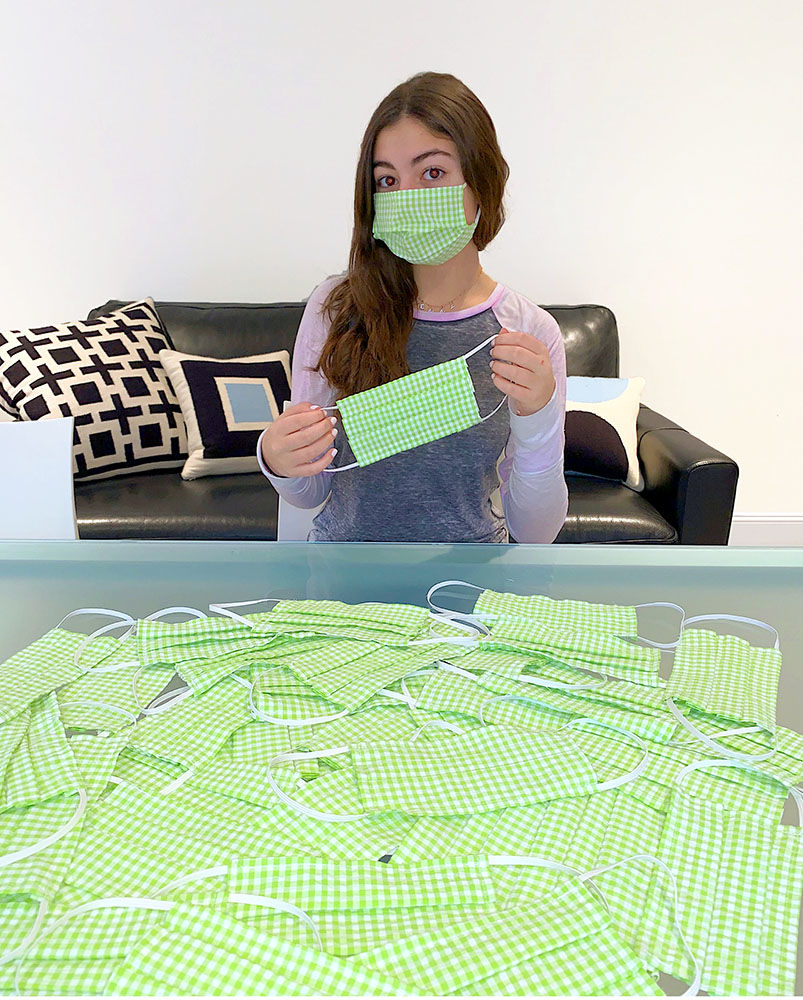 Jenny Kahn makes face masks from leftover fabric for medical workers who are at risk in the pandemic. 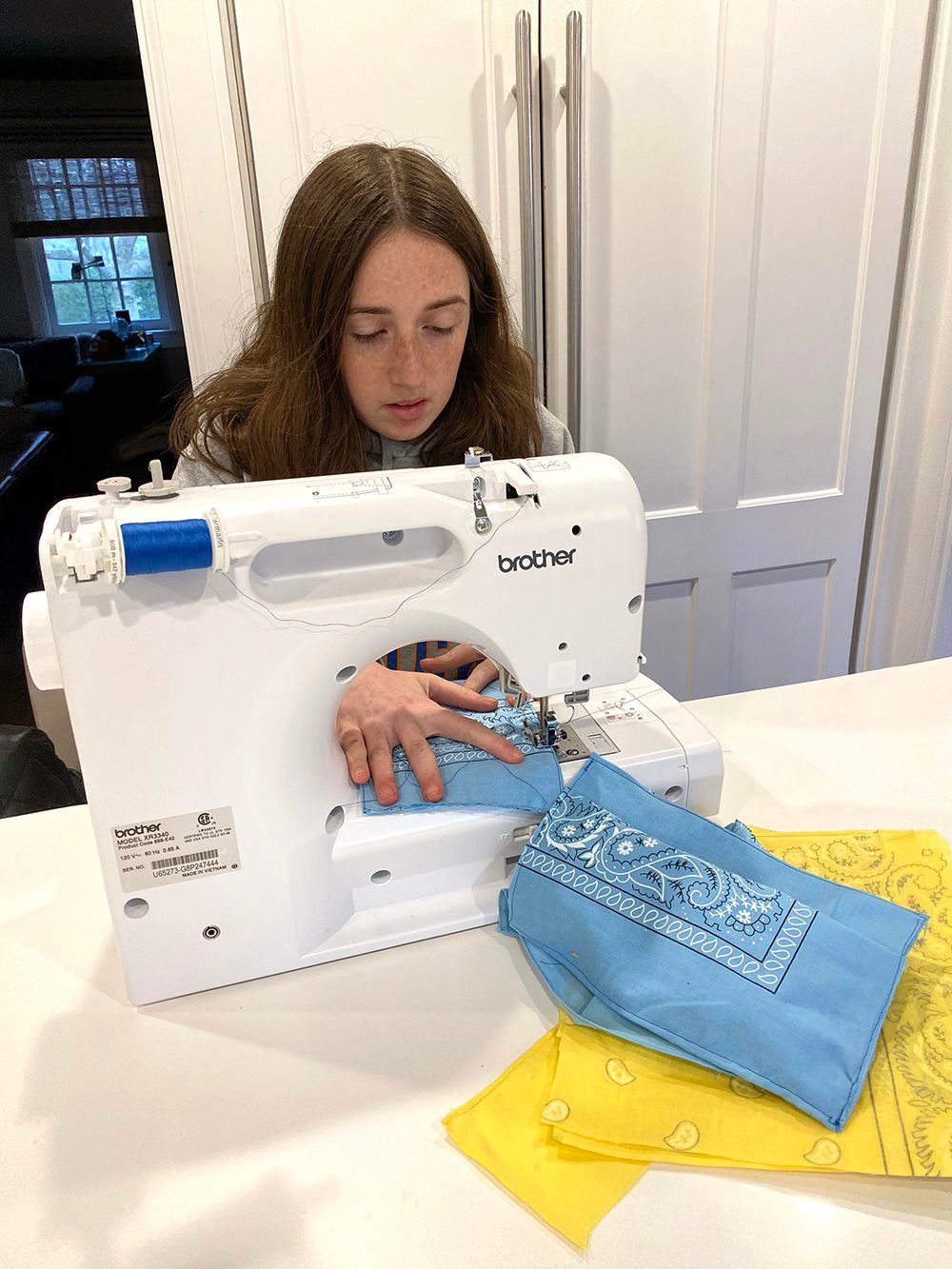 Hayden Plattus works at her sewing machine to create masks that tie in the back. 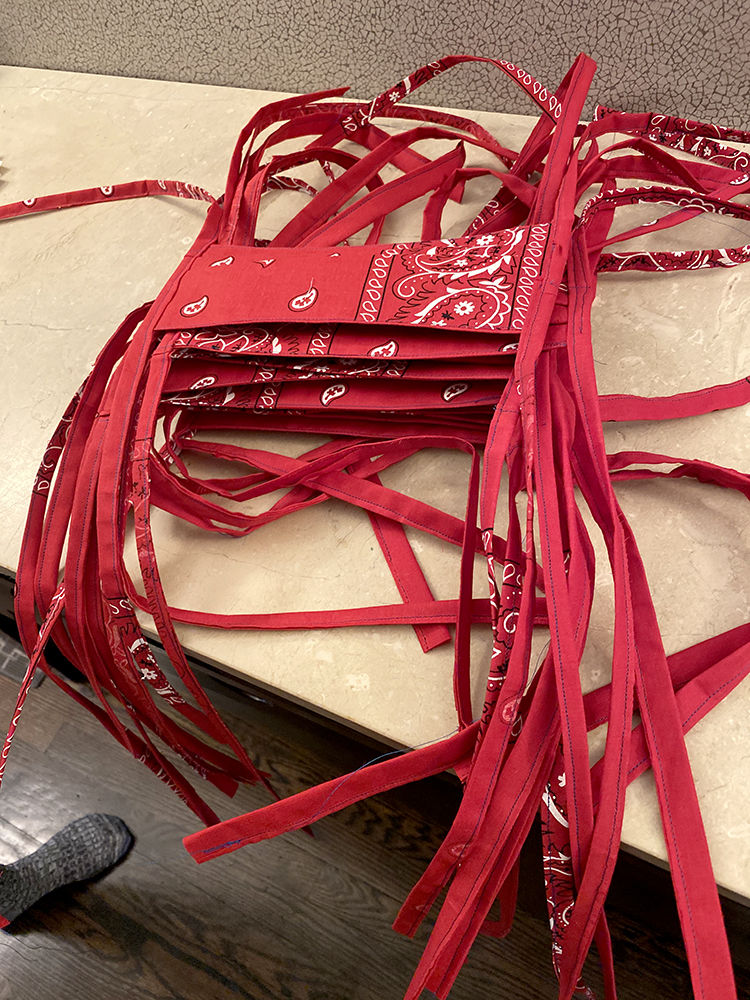 The masks made by Hayden Plattus tie in the back. 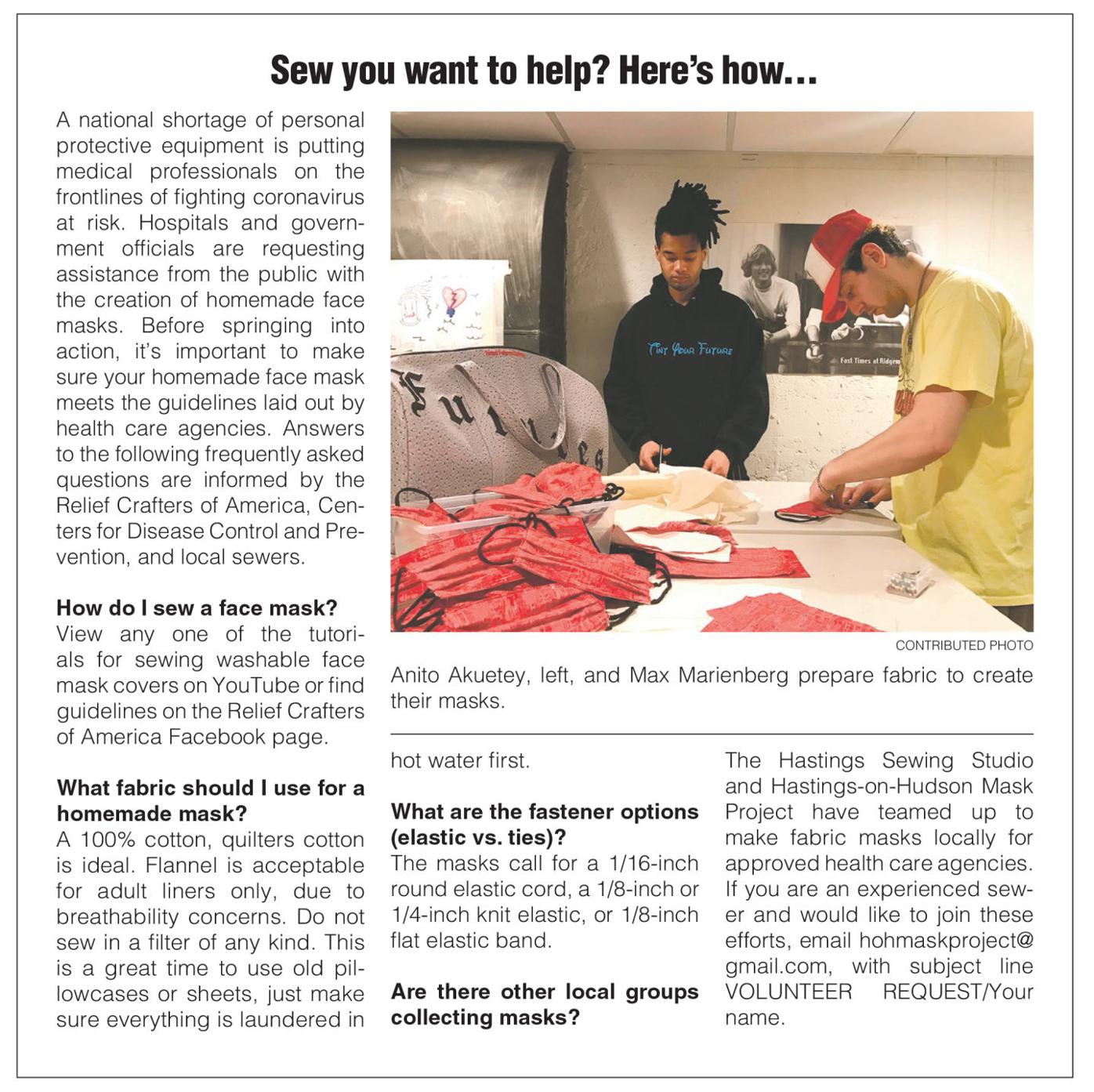 With one of the major focuses of the COVID-19 pandemic turning to safety for workers who are deemed “essential” by the government, health care providers are at the top of everyone’s priority list.

This time it’s not just thoughts, prayers and applause being offered. Instead, Scarsdale and Edgemont community members are taking matters into their own hands by making protective masks to cover the N95 respirator masks and more common surgical masks that are keeping hospital and medical group workers safe who are often provided one mask per day at work.

As a 7-year-old, Plattus watched her mom sew tags on clothing for camp and was so enthralled with the sewing machine that her mom signed her up for classes at Joann Fabrics and Crafts on Central Avenue in Scarsdale. Finding the skill to be refreshing, relaxing and rewarding, Plattus has continued sewing ever since.

Her recently completed Girl Scout Gold Award 80-hour service project focused on sewing blankets for babies and toddlers, which she donated to Children’s Hospital at Montefiore in the Bronx. The idea for the blankets was inspired by one of Plattus’ twin younger brothers, who as an infant spent a week in intensive care at the hospital and to whom Plattus delivered a similar type of blanket he adored as a child.

“It’s very satisfying in the end when you finish it,” Plattus said of her 58-blanket project, adding, “Handing them off and knowing how many kids I would be reaching out to with those blankets just made me so happy.”

In addition, Plattus spent 16 of those hours teaching younger Scouts how to sew. Sharing her passion with other girls was a great reward. The younger girls wrote inspiration messages like “You got this,” “Smile” and “Keep believing” that Plattus sewed onto the blankets.

“Seeing them be as enthusiastic about sewing as I was when I was little made me glad I was teaching people something they would get something out of because they were enjoying it so much,” Plattus said.

With that project completed prior to the suggested quarantine and handed off to local Sheryl Braun, who works at Montefiore, the break in her schedule during distance learning and social distancing led Plattus to take up mask-making after she heard Joann was giving away fabric to anyone who wanted to make masks to donate.

Plattus already had scores of 100 percent cotton bandanas in her basement, which she knew she could repurpose into masks. She found a video online that broke down the techniques used for making a safe, effective mask with double layers and a pocket for a filter. What is unique about the masks Plattus makes is that they don’t have elastic. She used extra bandana pieces as ties to go around the back of the head. Each mask takes about 10 or 15 minutes from start to finish between cutting and sewing. She gets about three masks from every two bandanas.

“I saw the cause and I jumped on it,” she said. “I’ve missed sewing so much from my project, and donating the masks to the same place I donated the blankets is very meaningful to me.”

Marienberg and Akuetey, who have been best friends since they were sixth graders, started a streetwear design company called Tinted Futures over the past couple of years and went public with some of their designs in November.

“One day I just texted him and told him I thought we could probably make clothes just as well as a lot of our favorite designers, so we just started working together on different designs,” Marienberg said.

With the skills they have learned over the years — Marienberg attends Fashion Institute of Technology in New York City and Akuetey is a model — they’ve also jumped on the mask-making bandwagon.

“We always want to help people and I saw one of my favorite old teachers, Stacy Scibelli [of Westchester Community College], posting stories on her Instagram about how she was making masks and she had a few different directions on how to make them, and I also read in the Inquirer about Scarsdale Medical Group doctors testing people for corona and putting their lives on the line to help others, so we just figured since there was a shortage in masks that we should try to help out as much as we could,” Marienberg said.

The duo secured fabric from Joann and used that along with muslin and some interfacing to add sturdiness to the masks. Since Akuetey isn’t as adept at sewing, he cuts fabric and makes the folds so Marienberg, who is immunocompromised and can’t leave the house, can do the stitching to create the masks.

Marienberg and Akuetey are leaving messages at major area medical facilities, including Scarsdale Medical Group, offering to donate the masks.

“We always want to help out people whenever we can, so it feels nice that now that people really need something we have the resources and knowledge on how to make those things,” Akuetey said, adding, “It doesn’t have to be about the money. It’s the feeling of giving to those who are in need [that’s] far more beneficial to us as well.”

Kahn is no stranger to helping the planet through her school club, Up2D8, which focuses on fashion/sustainability and “recycled” clothing made entirely of extra material and scraps, notably from her dad’s clothing company. For Kahn, making masks out of unused fabric was a natural fit.

Kahn has long been interested in fashion design and as a freshman she began spending weekends at FIT taking classes, including sewing.

“I always loved seeing the end product of my designs, so sewing allowed me to see some of my designs come to life,” she said. “I’ve been designing and exploring accessories and jewelry since elementary school.”

At first she tried T-shirt material, but that was too stretchy and tough to sew so she found stiffer fabric and got to work, learning from YouTube tutorials.

Once everything was measured, cut, folded and pinned, she sewed the perimeter of each mask on her sewing machine and “knocked out” more than 100 masks in a few days, and then donated the masks, which come in two sizes, to New York Presbyterian/Weill Cornell Medical Center, where she was born, through Michelle Kantor of Scarsdale, who works there.

“It feels really great,” Kahn said. “Hopefully I can help prevent people from getting coronavirus, which is spreading so quickly. I think it’s so important for people to be wearing masks. For me to help out is just amazing.”

Through Up2D8, Kahn is setting up an assembly line where one person cuts, another irons the folds and another does the sewing. After all, the more masks and the more people involved the better.

Not one to stop there, Kahn is also exploring the process of making surgical cap covers, too, another need for hospital staff.

“You can make an impact whether you’re in your house or in other ways,” future fashion mogul Kahn said. “Even though [it] seems so simple to make these masks, this actually has such an impact on the people that you’re helping.”