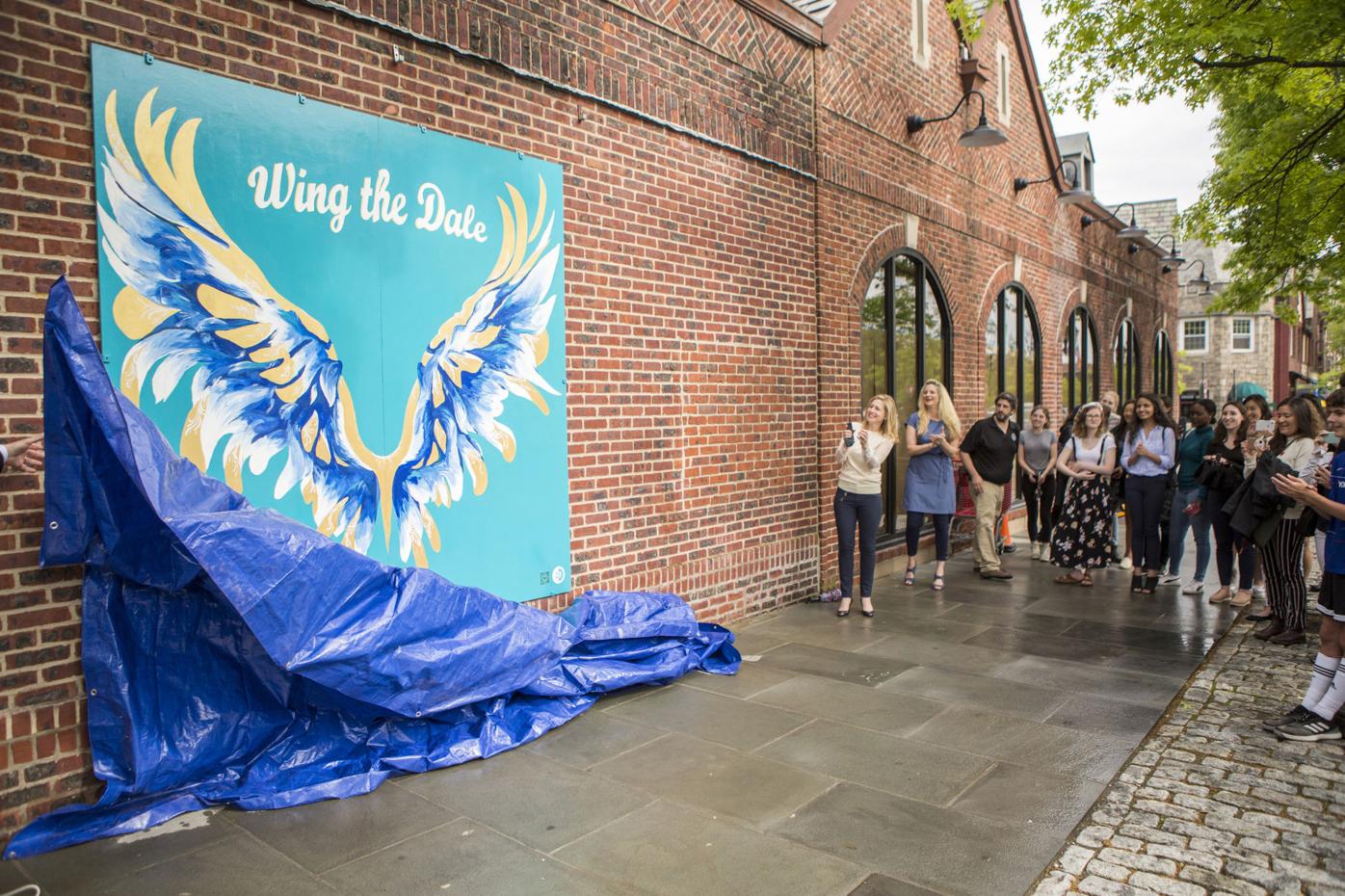 The unveiling of 'Wing the 'Dale.' 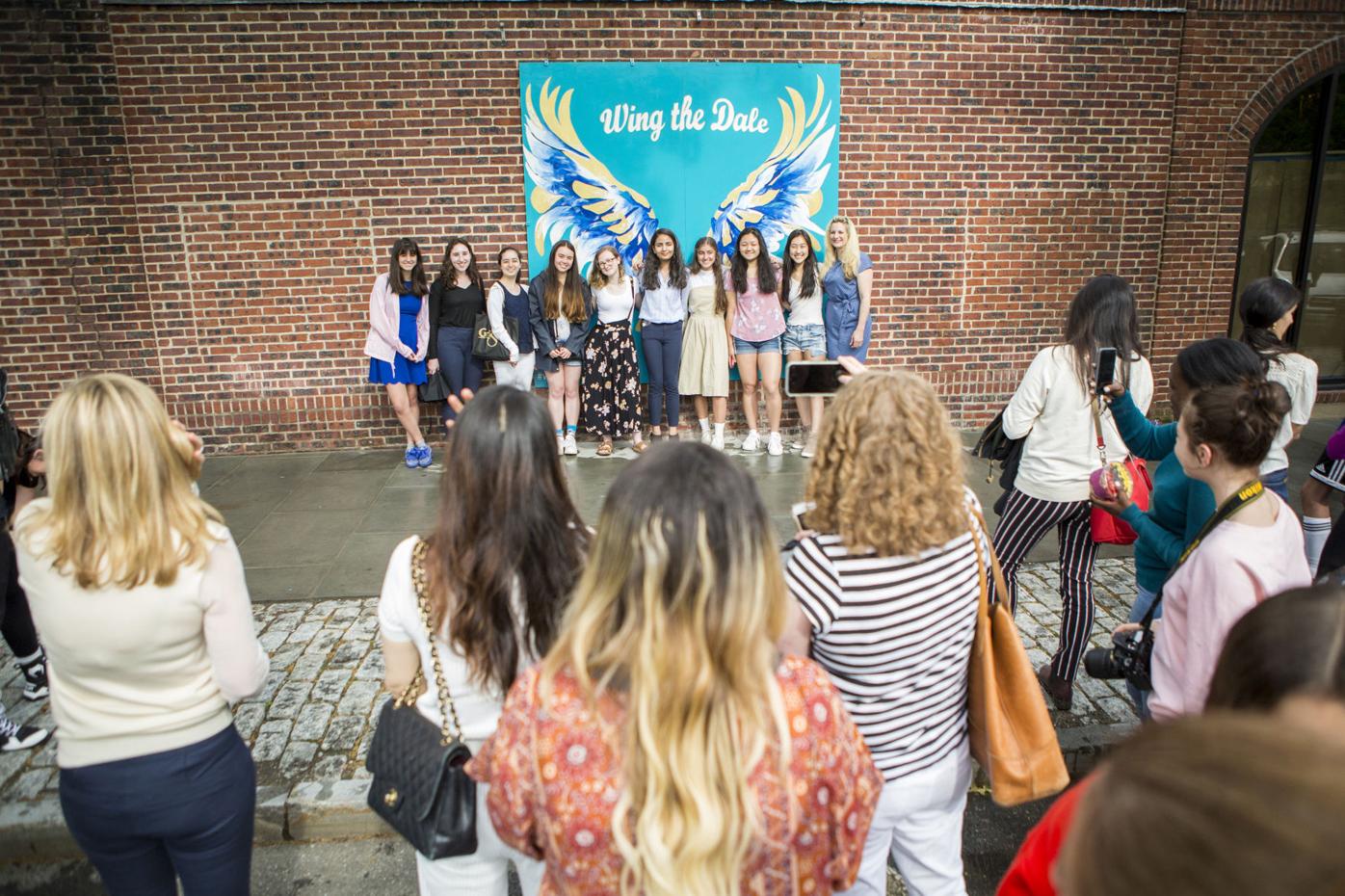 To widespread excitement on May 23, the “Wing the ‘Dale” mural was unveiled outside DeCiccos Family Markets at 54 East Parkway. The painted pair of wings provides a unique photo opportunity for Scarsdalians of all ages. The project, an aesthetically pleasing although somewhat simple addition to Scarsdale’s downtown, took the effort of a village to create.

The Acceleration Project, a nonprofit consulting firm working to revitalize the village economy, facilitated the creation of the wings artwork display.

“Public art … adds a uniqueness to our community and … we gain cultural, social and economic value through it,” Amy Nadasdi, a TAP consultant, said.

TAP approached Scarsdale students who are members of the National Art Honor Society to create a winged mural to go on the side of DeCiccos. NAHS is a national organization with local chapters for high school students who demonstrate an outstanding ability and interest in art. Scarsdale High School’s chapter said its goal is to “better the community through the spread of art.”

Janna Johnsen, the teacher advisor of Scarsdale’s NAHS, worked with the students of the club to pick out a design and paint it on wooden panels. She told the Inquirer NAHS was looking for young student artists to be involved with a mural project inspired by wings painted on panels and walls in cities across the world.

“As a club, we came together through the design process,” Johnsen said. “We brainstormed all the ideas, we looked at examples across the world, we thought of our own color palette and wing design.”

The club voted on the design they liked best, which now stands, 8 feet by 8 feet, as suburban art in Scarsdale. “It feels awesome [to see the mural in town]. It feels surreal,” said Lucy Du, a member of NAHS.

“I’m extremely proud of our creative student design team and the incredible support and opportunity the TAP organization has given us for this community art project,” said Johnsen, in a press release from Wing the ’Dale.

The festival for the installation began at 4:30 p.m. on May 23, as Mayor Marc Samwick cut a ribbon in front of the mural, officially opening it to the public. Samwick noted, “I am the mayor of a wonderful town. And this is a wonderful example of what that town can do.” Samwick was followed by comments from Amy Nadasdi, who spoke briefly on the TAP’s mission to beautify the town. Johnsen also spoke about the mural’s creation and the students who painted the mural were on scene with their families. After the speeches ended, those students, and many others, took selfies in front of the wings panels.

The festivities continued in Chase Park with a concert by the band Ibex and fare from Walter’s Hot Dogs food truck — all presented in collaboration with TAP and Scarsdale’s new Arts Advisory Council and the parks and recreation department. A contest was held to see who could post the most photos on Instagram using the hashtag #wingthedale. The winner received a student-made #wingthedale T-shirt.

TAP and the NAHS both share similar goals. According to Johnsen, both organizations share the motivation “to invigorate the culture, and … get the community [members] downtown ... [and] getting the foot traffic out to those local restaurants.” TAP’s vision has come to fruition in more avenues than just the wings art project, with new restaurants and small businesses adding to Scarsdale’s downtown bustle in recent months.