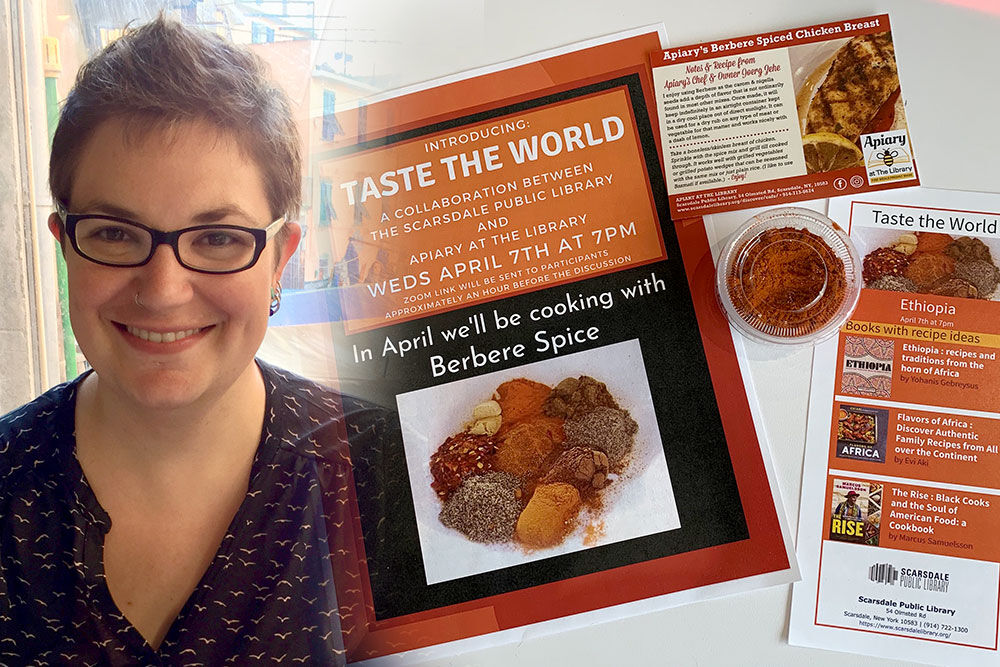 Katie Karkheck is ready for Taste the World. 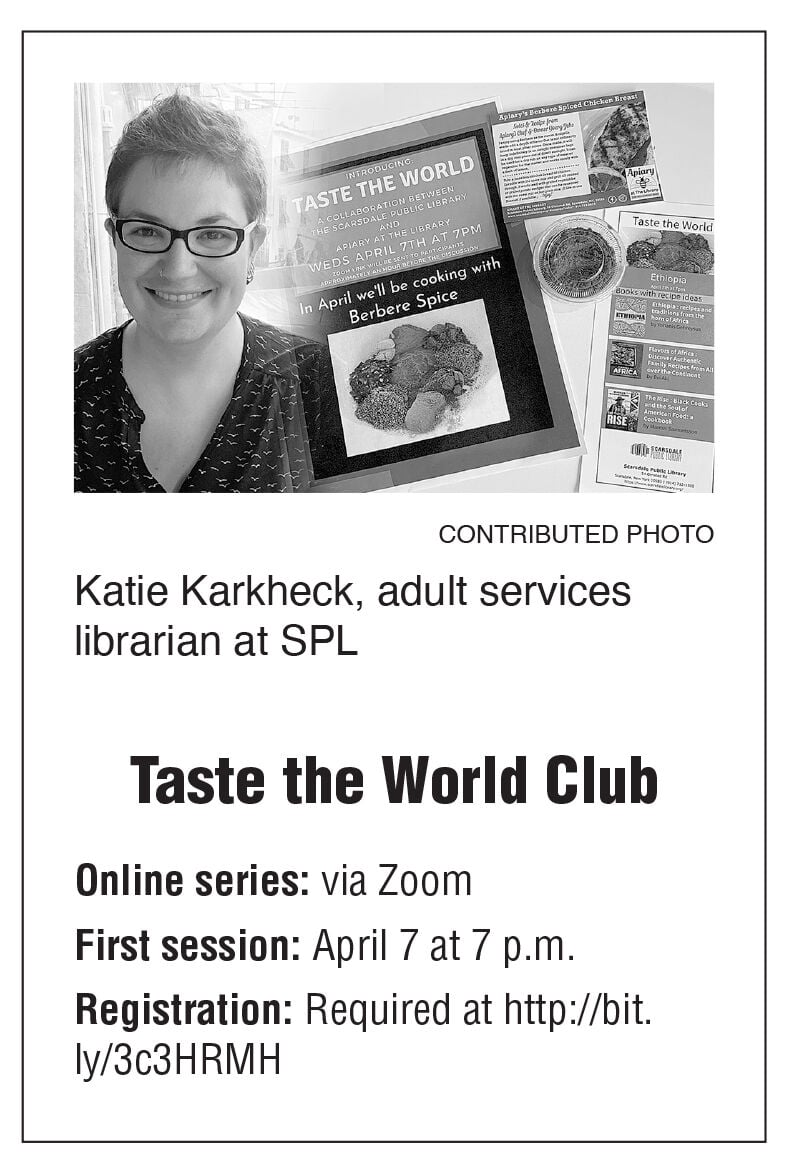 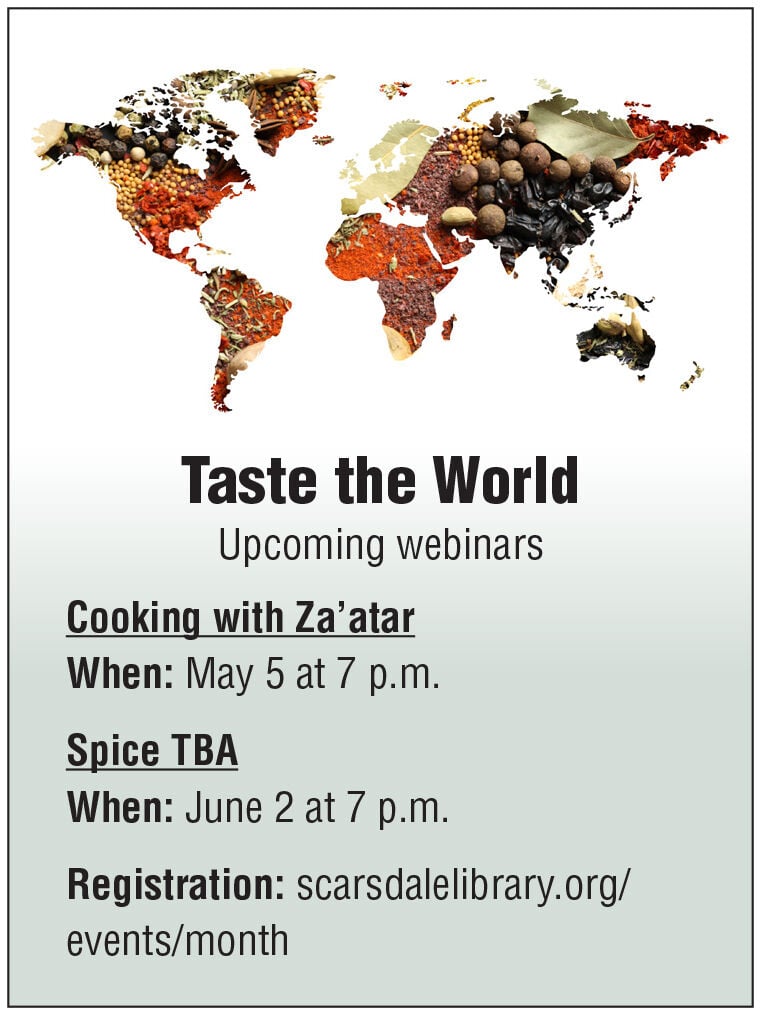 The Scarsdale Public Library has long been known for its tasteful programs. Now, it’s offering a program that’s tasty, too: the Taste the World Club, devoted to exploring the spices of the world, held its first meeting via Zoom on Wednesday, April 7, at 7 p.m. The next session is slated for May 5.

The program, which is a collaboration between the library and its new café, the Apiary, is the brainchild of Katie Karkheck, an adult services librarian who joined the SPL in November after previously working at the Valley Cottage Public Library. By introducing Scarsdalians to new spices, “I’m hoping to get people out of their comfort zones a little bit, to try something new, and to experiment and have fun with it,” she said.

For the club’s inaugural meeting, Karkheck selected berbere, a spice blend that forms the foundation of Ethiopian food. “It’s a mixture of coriander, fenugreek, caradamom, cinnamon and paprika — all sorts of spices,” she explained. “There is a little bit of heat to it, but it’s not a fiery heat, just a little bit of a bite.”

Program registrants will be asked to stop by the library prior to the Zoom meeting to pick up a free kit that Karkheck has assembled. It will include a couple of tablespoons of berbere that Karkheck purchased for club participants, plus a sheet that has a recipe for recreating the spice blend at home. “There will also be suggestions for websites where you can find ways to use it, and suggestions of cookbooks and books that take place in Ethiopia,” Karkheck said.

The library has also teamed up with Apiary to take the program theme even further. “They are going to be featuring a dish that uses the spice for the month,” Karkheck explained. “They have included a recipe card [for the dish] in the kit.”

The idea, she continued, is for participants to explore their kit and then use the berbere sample to cook a dish or two of their own at home. “Then we’ll get together over Zoom and discuss what we did,” she said.

She has already experimented with the berbere herself. “I made a big tofu with it, with roasted onions, and then I mixed it with shredded and sautéed Brussels sprouts and garlic,” she shared. “It was delicious.”

For Karkheck, experimenting with spices is something she is used to doing. “If you want the full story, I became a vegetarian when I was 11 years old, and my family is a bunch of meat eaters,” she shared. “My mother said to me, ‘You have to learn how to feed yourself, so you’re not eating French fries and mac and cheese every night. And you have to learn how to cook, because I’m not making two dinners a night.’ So I started cooking when I was 11, and it was such a gift that she gave to me.”

Through trial and error, Karkheck quickly learned the many ways in which spices could elevate a meal. She soon discovered they could be a wonderful substitute for salt, for instance: “I don’t salt my food very much at all,” she observed.

For the Taste the World Club, “If there are [health benefits] specific to any of the spices I pick, I will definitely put it in the materials that I hand out along with the spices themselves,” Karkheck promised. “So in the case of things like turmeric, people will get some of that information.”

As for which spices the club will feature in upcoming months, Karkheck hasn’t yet decided. “I might use a single spice, or it might be a different blend,” she said. “I’m thinking we could do a cardamom, which is great for both sweet and savory. I would like to do Chinese five spice at some point, and I would like to do something as simple as turmeric.”

Karkheck has a post-pandemic vision for a library culinary club that will extend beyond mere Zoom meetings. “What I’d ultimately like to do is to start a book club once we’re allowed to gather and eat in person,” she said. “I’m hoping to eventually be able to ‘eat your cookbook’ and have everybody make something and bring it in, and then have it basically be a part-discussion, part-potluck kind of thing. It’s something that I did at my previous library, and everybody really enjoyed it, myself included.”

She also hopes to oversee a book club that will meet offsite as well. “We’ll meet in maybe some of the local restaurants and bars,” she said. “It’s really nice to be able to discuss a book over a meal and a beer, you know?”

For now, though, Karkheck hopes the Taste the World Club will help introduce locals to new spices — as well as to her. Beginning her new job at the library during the pandemic has been an unusual experience, she conceded: “Not being able to meet the community has been a very weird way to transition,” she noted.

Now that the library has begun to reopen, Karkheck is finally meeting people — and has liked everyone she meets. “Everybody’s been very welcoming, and I have just been excited to be here,” she said. With the introduction of the Taste the World Club, Scarsdalians will no doubt be excited that Karkheck is now among us, as well.