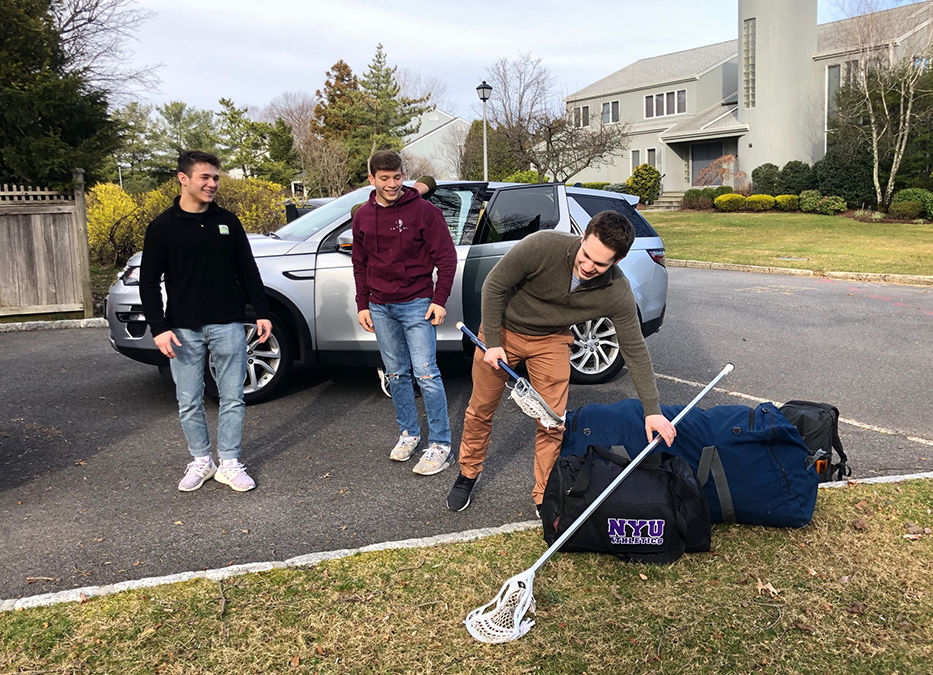 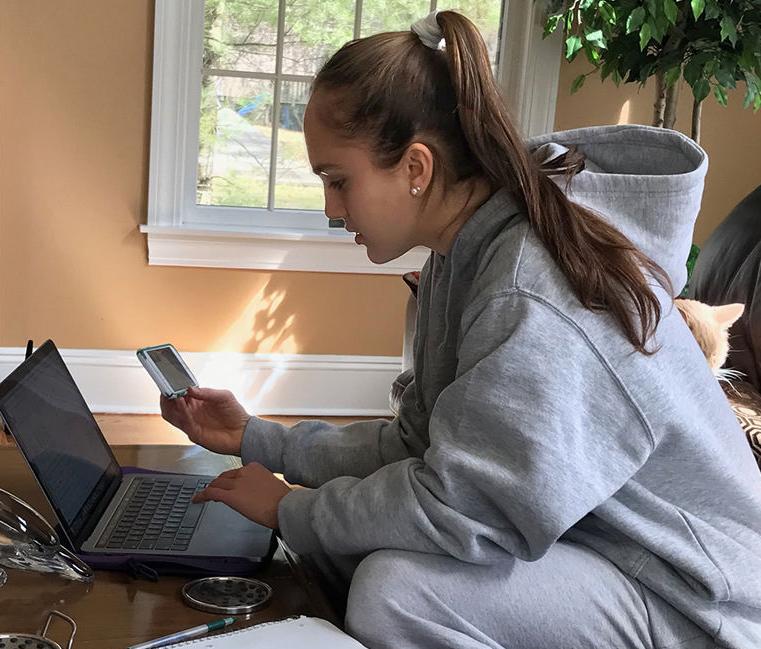 Allison Stafford back home from Amherst.

Over the past few weeks, hundreds of U.S. colleges have closed their campuses in one of the country’s latest efforts to help “flatten the curve” of the COVID-19 pandemic. Many students were given mere days to pack up and move home, and they will keep up with coursework through e-learning.

Stafford, a varsity soccer player on the pre-med track, found out about Amherst’s closure on Monday evening, March 9. Although soccer is a fall sport, it has an offseason that will be impacted by the school’s closure.

“Now I’m not sure what to do soccerwise,” said Stafford, who lives in Quaker Ridge and still hopes to get together with friends in the area every so often to practice.

Despite facing such uncertainty and disappointment, Stafford maintained a positive outlook. “I keep saying … put this into perspective… it’s 20 times worse for a college senior or a spring athlete.”

The experience of having to move back home in the midst of freshman year has also been “super frustrating” for University of Rochester freshman Charlotte Irwin, another Scarsdale High School alumna. “There’s a lot of fun stuff at the end of the year that I don’t get to experience now,” said Irwin, a biology major.

Irwin recently joined a sorority and was looking forward to being formally initiated when she found out she would be moving back home.

Spier Road resident Jordan Claman, a sophomore at Tufts University, was alerted about his school’s closure on March 10 and was back in Scarsdale less than a week later. After news spread of Harvard’s closure earlier that day, many Tufts’ students became “anxious,” according to Claman.

“It’s definitely really upsetting and a bummer,” the math major said about having his semester cut short, “but I’m looking at the bright side of things; it could be a lot worse.”

New York University sophomore and data science major Miles Rosenstadt, another Scarsdale alum, originally planned to return to campus after spring break, as NYU was planning to keep its dorms open for the spring semester. On March 16, the university announced that all residence halls would not reopen after break. Prior to that announcement, Rosenstadt expressed concern for NYU’S “exceptional amount of international students” and felt that it would not be fair to them if the dorms were closed.

Unlike Rosenstadt, Seth Schulman, also a sophomore at NYU, knew he wanted to leave the dorms and move back to Scarsdale prior to the school’s official announcement. “I just felt more comfortable in Scarsdale than the city,” said Schulman, a wrestler who is studying nutrition and food science. “The administration was also really leaning toward having people leave the dorms… and the vast majority of my friends have left.”

With colleges shutting down and canceling all in-person activities, students must now use computers and tablets to attend classes remotely, mostly over the digital platform Zoom. Without the ability to study at local coffee shops or libraries, college students must figure out how to stay in a studious frame of mind and create environments for themselves at home that are conducive to such high-level work.

For Rosenstadt, the online learning experience so far has been “crazy” and he’s found it to be “way harder to engage.” Similarly, Claman anticipates that it will be “really weird” to learn and study at home outside of the usual campus environment. The Tufts sophomore did note, however, that grading and expectations might become “looser” given the unprecedented circumstances.

And while e-learning poses many challenges in and of itself, it can be especially tricky for students whose classes don’t easily translate into the digital space. “I’m taking general chemistry, which has a lab component and will have to be conducted online,” said Schulman. “And then I’m also taking another class called Food Science and Technology which has both a lecture and lab component…”

Moving the interactive labs online could really “hinder” the classes, Schulman said. Luckily, since most of his other classes are lecture-based, he’s optimistic that he will be able to achieve the same level of learning online as he did in the classroom.

But online learning is only half the battle for newly displaced college students. Now that they’re home, they must figure out how to maintain healthy social lives while also taking precautions to protect themselves and others.

“I’ve been trying to see my friends when I can,” said Irwin, “but we definitely have to be careful… There’s no hugging.”

Similarly, Stafford has been seeing friends, but only in small-group settings where proper precautions are taken. “Partying and stuff is a big no-no,” said Stafford, adding, “I definitely see why it should not be okay given the circumstances.”

For Rosenstadt, free time is becoming increasingly boring without any sports to watch. “It’s not just me — it’s every other 20-year-old college guy… We don’t know how we’re going to spend our time for the next month,” he said. “There’s no sports to gamble on… it’s crazy right now, there’s nothing to do.”

All this has been especially taxing on the parents of displaced college students, many of whom are worried about their kids going out and seeing friends.

One Scarsdale parent admitted that she is worried about her three kids — one of whom is a college student — being exposed to the coronavirus at friends’ houses. “If the parents work in a hospital, if they’re doctors, what are they bringing in?” she said. Her kids are all over the age of 16, which makes it particularly hard to force them to stay home. “I feel like they’re not taking it seriously enough and it’s really hard to contain my kids… I’m frustrated.”

Another Scarsdale parent said she is “very stressed about the entire situation.” She said she had originally been allowing her college-aged daughter to go out and socialize with friends on a very limited basis, but is now rethinking that decision and may end up quarantining the entire family out of an abundance of caution.

While most displaced college students still have the option to engage in some form of a social life, Washington University of St. Louis junior Michael Spiro is confined to his basement, for now. Although he does not have coronavirus, Spiro is being quarantined for two weeks as a precaution after being sent home from his study abroad program in Barcelona, Spain.

“I’m definitely upset that I didn’t get to have a full semester abroad,” said Spiro. “But at the same time, I definitely think it was the right decision to have all of us return home… I’ve definitely come to peace with it.”

Spiro said that such a decision should’ve been made “way sooner.” In fact, Spiro’s parents wanted him to come home two weeks before it became mandatory on Thursday, March 12, but were told by officials at WashU and his school in Barcelona that the situation wasn’t severe enough to allow Spiro to do so.

At home, Spiro is self-quarantined in his basement because he has other family members living at home.

“Quarantining has definitely been very boring,” he said, adding that he’s been “watching TV, reading books, and I have somewhat of a gym down here so I’ve been able to work out a little which has been really nice.”

Now that they’re home, the students expect to remain here for the rest of the semester. Claman’s parents rented a van to collect him and his belongings on Sunday, March 15. Stafford brought everything home in two cars, except for her refrigerator. Irwin went back from spring break on March 16 to pick up her stuff, though she had until March 22 to be out of the dorm. Spiro’s Airbnb in Barcelona is rented until mid-May, so that’s something his family needs to figure out, as it was not affiliated with either school.

It’s a waiting game for college students around the county and many who are less fortunate than the ones from Scarsdale are having trouble with traveling, meals and finding a place to go on such short notice.

As no one knows how long this new way of living and learning will last, echoing many community members’ thoughts on the entire situation caused by the outbreak, Spiro said, “Time will tell us.”