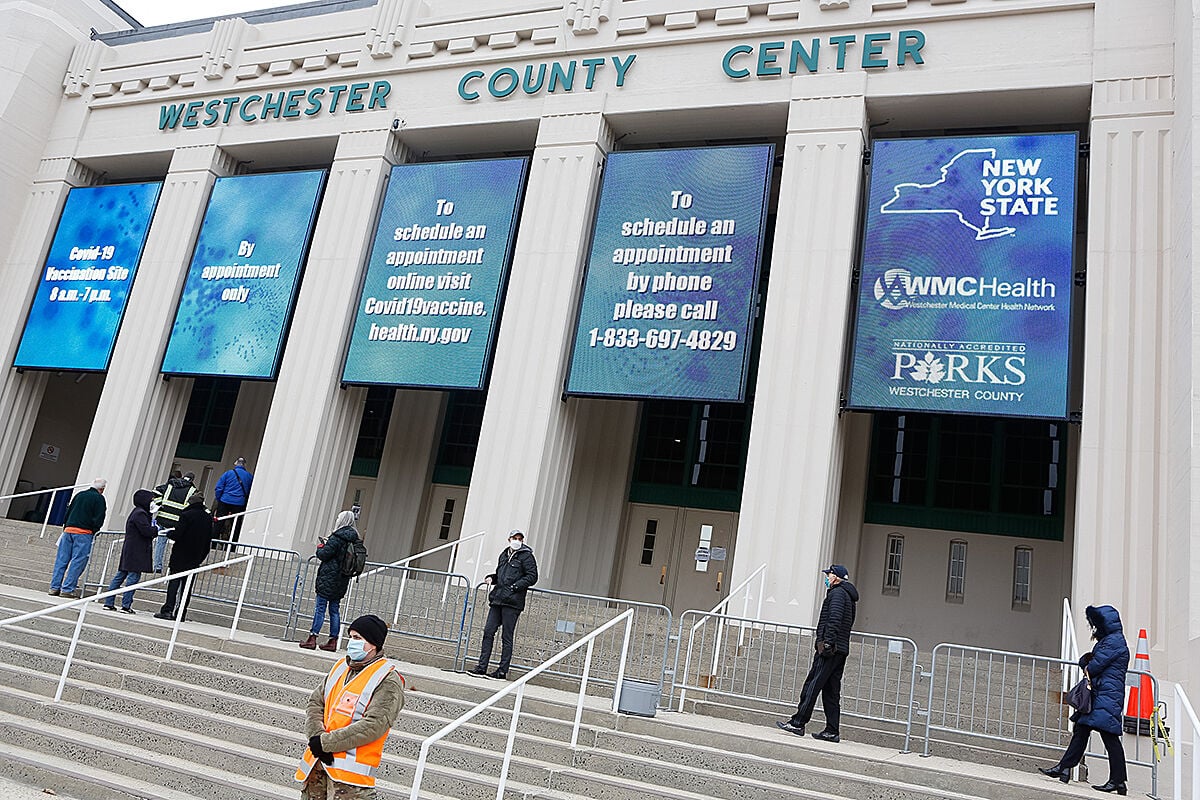 A line formed shortly after 11 a.m. at the Westchester County Center Wednesday. 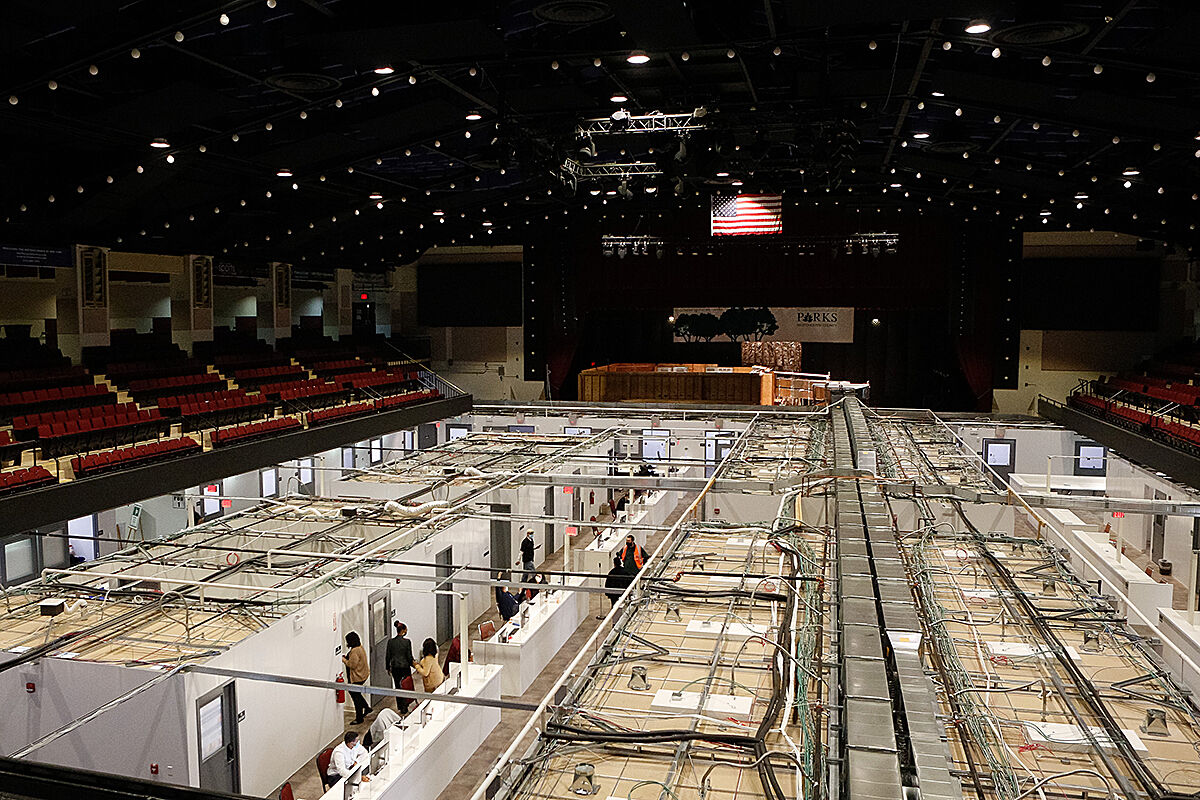 The interior of the county center went from entertainment center to emergency hospital to vaccination center. 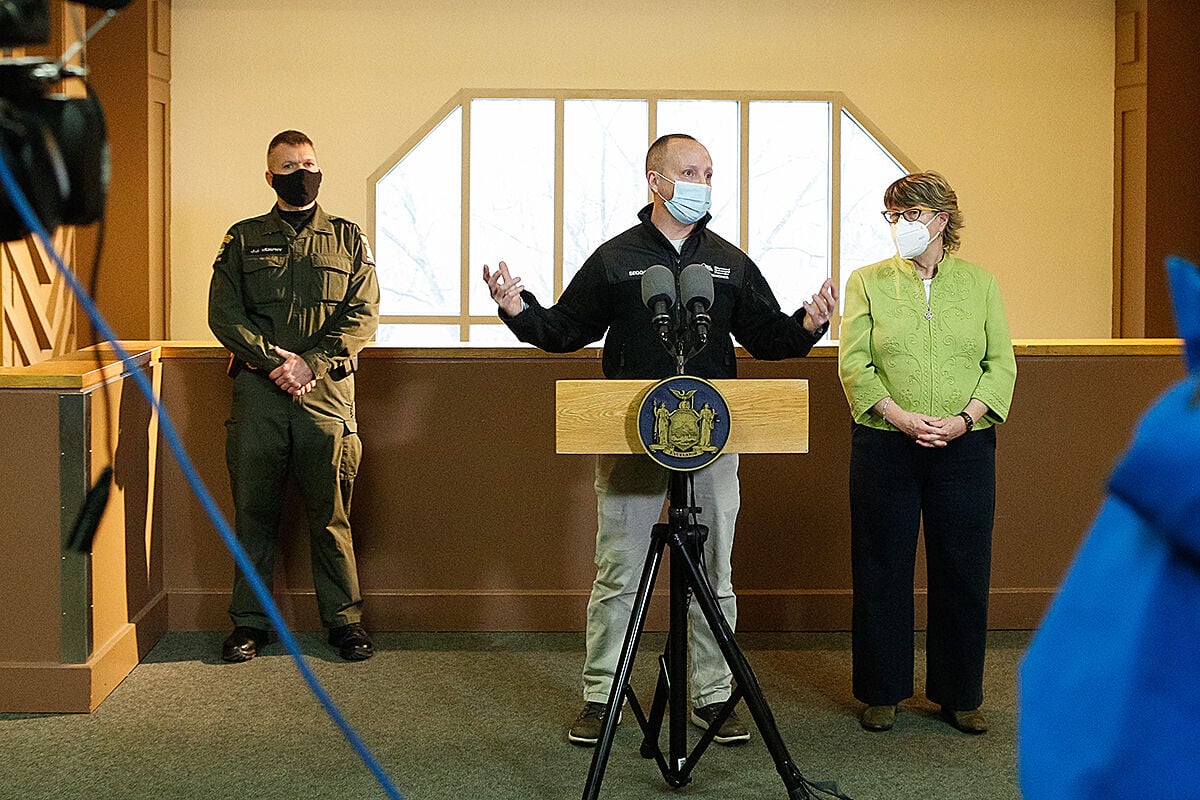 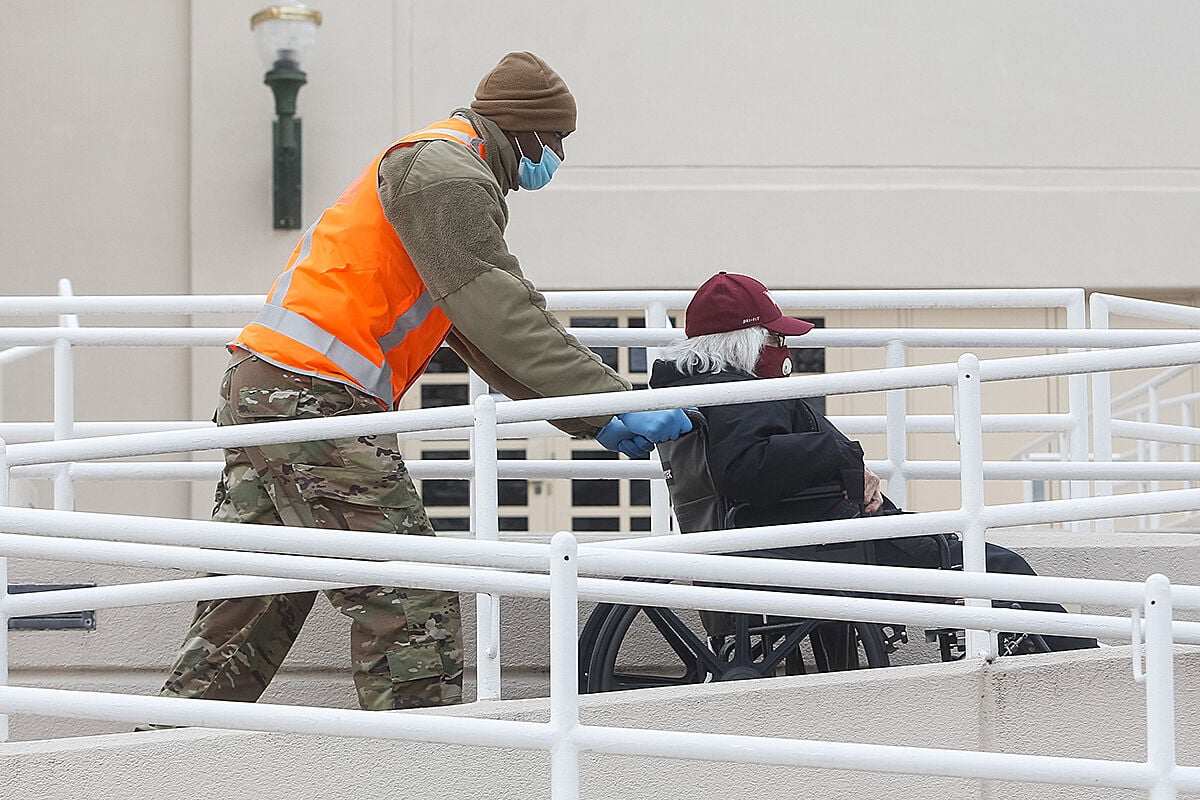 A DEC officer helps an elderly patient up the wheelchair ramp. 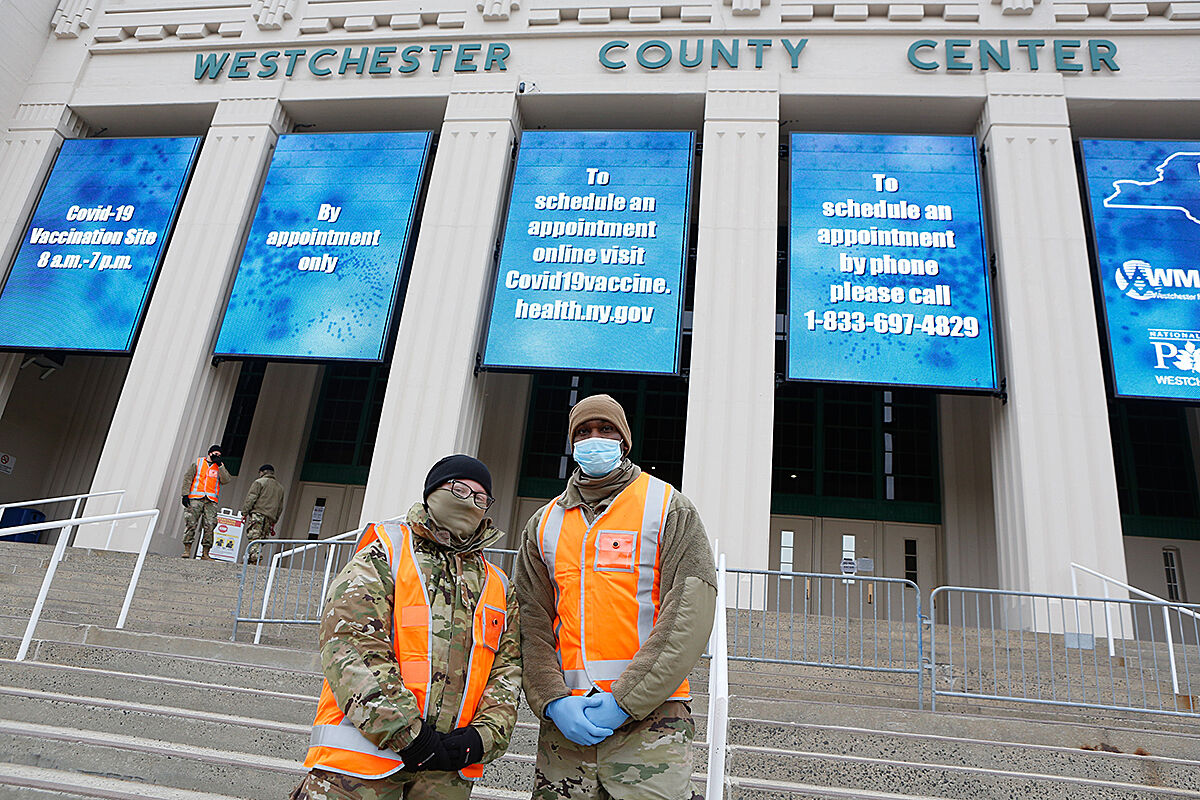 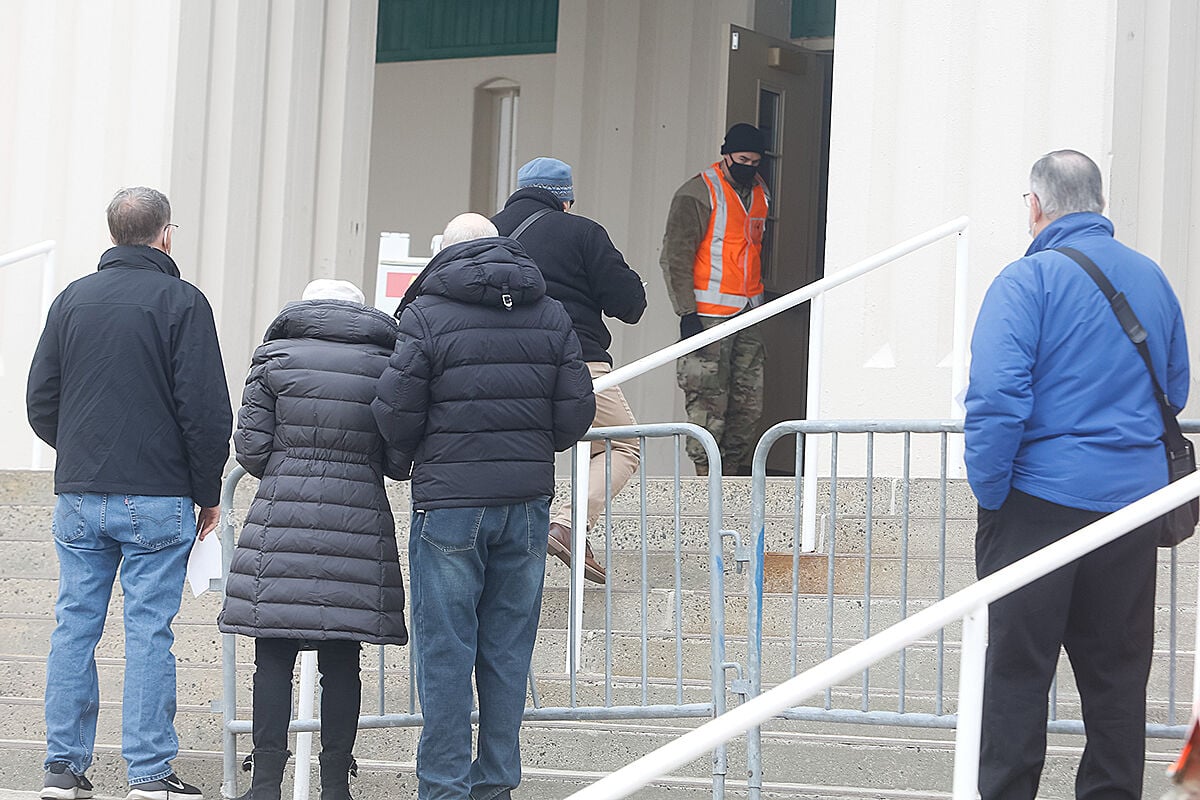 Patiently waiting for the vaccine at the county center.

New York State Department of Environmental Conservation Commissioner Basil Seggos spent time in White Plains overseeing the conversion of the Westchester County Center from an entertainment venue into an emergency COVID-19 hospital last spring. When he returned recently, it was to convert the space into a state-run mass vaccination site.

The county center officially reopened its doors to the public at 8 a.m. Wednesday, Jan. 13, to start administering free first round doses of the Pfizer vaccine to New York State residents who had an appointment and who fall into categories 1a and 1b.

The county center was never used as an ICU despite local hospitals being overwhelmed in the initial epicenter of the pandemic in March and April. Seggos said the changes were “minimal” and the infrastructure remains as a “fail-safe” should the county center need to be used to treat COVID-19 patients, but it now being a testing site is the “light at the end of the tunnel.”

“To me I feel really optimistic being here today,” Seggos said. “We’re bringing people through here to ultimately help them get out of this mess that we’re in, giving them the vaccination here as opposed to having to treat people here. You can’t compare the two.”

While other parts of the country are seeing long Election Day-type lines already, it was relatively quiet at the county center Wednesday morning with police directing people where to go and camouflaged Environmental Conservation officers under the command of Lt. John Murphy standing guard and also assisting residents. Seggos said more than 200 had been vaccinated by Westchester Medical Center staff “without incident” before 10:30 a.m., and just after 11 a.m. a line started to build on the county center steps leading up to the venue. According to a press release from Westchester County Executive George Latimer, 1,030 vaccines were administered on opening day.

Korean War veteran Armando Scogna of Tarrytown waited for his son to pick him up outside the county center after he received the vaccine. The 86-year-old was pleased with the process of getting the shot.

“It was OK, pretty orderly,” he said. “There were enough people in there to tell you what to do, where to go. It wasn’t bad at all … Everything goes pretty smoothly.”

Scogna said he felt “fine” and looked forward to returning 21 days later for the second dose.

Nyack resident Julia Healy, a 41-year-old teacher in Mamaroneck, was “pretty emotional” about receiving the vaccine. “I asked the woman who was administering the vaccine if anyone has cried from too much emotion,” Healy said. “She said, ‘No,’ so I decided I wasn’t going to be the first.”

She also had a positive experience inside the county center. “Very smooth, very secure, very organized,” she said. “I was thinking maybe the people who organized this center should be in charge of protecting the inauguration.”

Healy credited the scientific community for creating a sense of hope with the quick turnaround on the vaccine as Moderna’s two-dose vaccine is also available and Johnson & Johnson could soon apply for emergency use authorization for its one-dose shot.

“Thankfully we have scientists and they haven’t been fully suppressed and hopefully they will have the ability to do their work more freely after next week,” she said. “Thankfully the scientists have come through yet again to provide this vaccine for us. Hopefully we can get our society back to normal.”

Scogna and Healy are among the lucky ones to get a quick appointment as the list of those eligible now includes 7 million New Yorkers, the online registration system has crashed multiple times and residents haven’t always been able to find the information they need in the places they are told to look for it.

According to a press release from Gov. Andrew Cuomo’s office, “eligible New Yorkers should be prepared to receive an appointment date as far as 14 weeks or further in the future.”

Seggos made a plea to the public for “patience and calm” with the rollout and registration. “Once you have an appointment, the rest is really simple,” Seggos said, noting that you show up, get screened, get the shot, get observed for 15-30 minutes and sign up for your second dose before you leave.

Front-line workers were in group 1a beginning Dec. 14, and group 1b, which includes teachers and those 75 years and older, was announced on Friday, Jan. 8, to start signing up the evening of Monday, Jan. 11. On Tuesday, Jan. 12, anyone 65 and over was given the go-ahead.

The issue now, according to Seggos, is that New York State is only getting 300,000 doses of the vaccine each week. At that rate, he said, it will take six months just to vaccinate groups 1a and 1b.

“We need the federal government to step up,” he said. “We’ve needed that since Day 1, since March, and we have not gotten what we needed out of the federal government. We need the expansion of the vaccine effort to track what we are doing in terms of developing capacity. We have been expanding the population of those who are eligible for the vaccine based on federal guidance. We are increasing distribution points. But we’re going to need more vaccines.”

The state also opened up vaccination centers at the Javits Center in New York City and the New York State Fair Expo Center in Syracuse on Wednesday, with Jones Beach, University at Albany and others to follow, eventually totaling 20 sites. The first month of vaccinations for group 1a was largely done at hospitals directly to their workers and other first responders, and some pharmacies are soon expected to become vaccination sites.

“Governor Cuomo’s goal is to be the first state in the nation to be COVID free and these sites are the vehicle in which we will arrive at that destination,” Seggos said.

The county center opening came one day after the pandemic’s deadliest day, with 4,327 deaths on Tuesday and at a time when new variants of the disease are emerging.

“Patients should continue to wear masks, socially distance, wash their hands after this vaccine” Seggos said, adding, “You’re not Superman … you need to continue doing what you need to do to protect yourself and protect others. When you get the second vaccine, the booster in three weeks, that’s when we expect the body to be a bit stronger.”

“We’ve gotten to this point together,” Seggos said. “We have a chance to get out of this. Please be patient, please be calm and let’s get through this and cross the finish line together.”

Seggos has overseen several testing sites, citing New York as having “the most robust” testing program in the country. “I was there at some of these sites helping to operate them and we conducted hundreds of thousands of tests every day and we are continuing to do so at this point,” he said. “We are going to do the exact same thing with the vaccination program.”

He called everything from March to now “the largest government operation in our lifetimes,” calling this the “most important phase.”

Eligible New Yorkers in Phases 1a and 1b

To determine eligibility and schedule an appointment to receive their first dose, New Yorkers can utilize the state’s “Am I Eligible” app or website (https://am-i-eligible.covid19vaccine.health.ny.gov/) or call the New York State vaccination hotline at 1-833-NYS-4VAX (1-833-697-4829). Appointments to receive the second dose at these sites are scheduled in person after receiving the first dose.