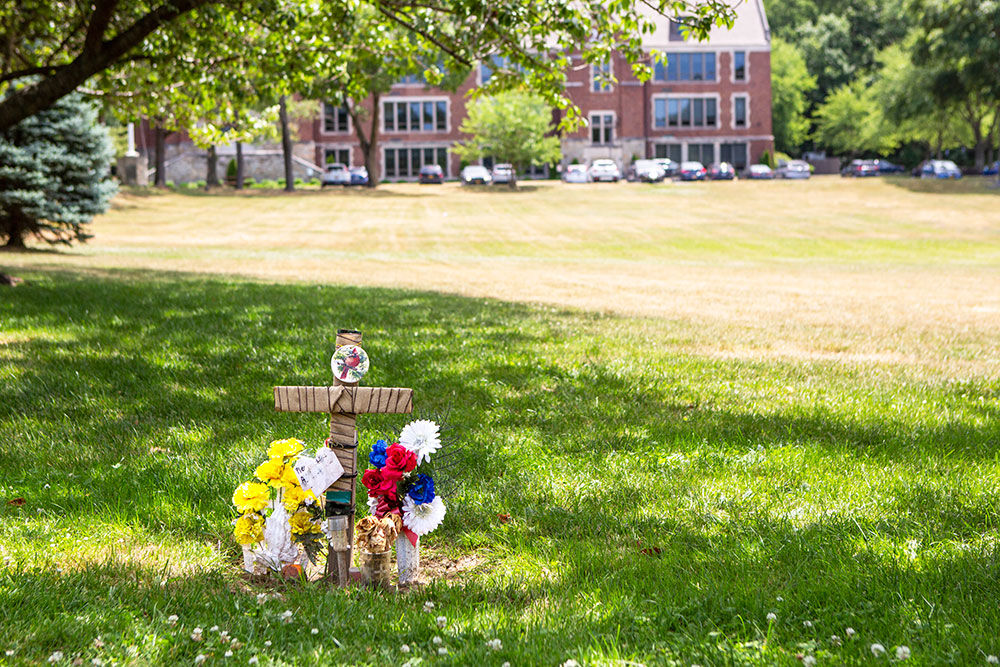 A memorial on Central Avenue where Jonathan Maldonado was arrested by Greenburgh police officers. 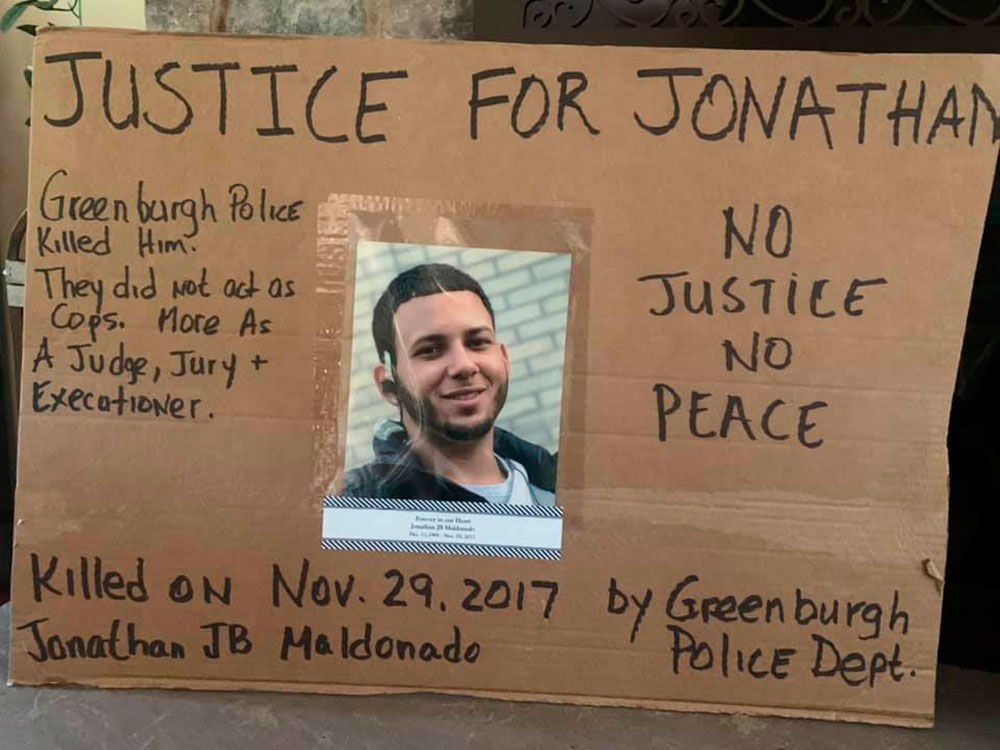 A poster carried during a demonstration on Central Avenue June 11 that called for justice in the death of Jonathan Maldonado.

District Court Judge Kenneth Karas on May 18 denied defendants’ motion to dismiss all claims made against four Greenburgh police officers involved in an incident in 2017 in which Yonkers resident Jonathan Maldonado died while in police custody after being detained at the corner of Harvard Drive and Central Park Avenue in Hartsdale.

Of the nine claims for relief outlined in an amended complaint, Karas dismissed two of the plaintiff’s claims on the scope of involvement of one officer, Lt. Gregory Attalienti and a wrongful death claim, which failed to mention the existence of a pecuniary loss, as required by state law.

“We feel pretty confident that discovery has brought forward facts that support our claims,” said Debra Cohen, the lawyer representing the Maldonado family. “We’re hopeful that this case will eventually be heard before a jury.”

According to an amended complaint filed last year, in November 2017 Jonathan Maldonado, a school aide for Yonkers Public Schools, had finished work and went to Best Buy on Central Avenue in Hartsdale, where he was accused by employees of stealing an iPhone. After store employees followed Maldonado out of the store and down the block to Webb Field, an employee flagged down a police vehicle being driven by Greenburgh Police Officer Richard Maguire. Two other officers, Officer Jean-Paul Lara and Detective Sean Freeman, a trained paramedic, were already en route. As the police officers approached Maldonado on the field, store employees said they saw Maldonado take what appeared to be multiple small envelopes out of his pocket. A store employee told Maguire about the envelopes, indicating that Maldonado might have put something in his mouth. According to the complaint, Maguire “ran from his vehicle, jumped on top of Mr. Maldonado and forcefully tried to get whatever might be inside his mouth.”

Lara and Freeman joined in soon after and one or more officers “lifted Mr. Maldonado up and slammed him to the ground.”

Lara tasered Maldonado from within 1 to 2 feet away in stun mode on his back and then again in drive stun on his buttock where he immediately became limp and unresponsive. According to the complaint, at no point was Maldonado fighting with officers.

When Attalienti arrived on scene, he ordered officers to prop Maldonado up in a seated position and Freeman, a trained paramedic, went to his car to get NARCAN, a drug that counteracts drug overdoses. While searching his car for the drug, a Greenburgh EMT arrived on scene and, after a quick assessment, told Freeman that Maldonado needed immediate medical treatment. While Maldonado was propped up, Freeman, assisted by the EMT, administered multiple doses of NARCAN to Maldonado, which did not have any immediate observable effects. According to the complaint, Freeman saw Maldonado was not breathing and did not check Maldonado’s airway, provide oxygen therapy or cardiac intervention. Ten minutes after being tasered, Maldonado was lifted off the ground and placed on a gurney where he was moved near an ambulance when a second paramedic arrived who determined that Maldonado didn’t have a pulse and was not breathing. The paramedic began CPR and administered epinephrine, while Freeman took steps to view Maldonado’s airway and insert an endotracheal tube. According to the complaint, when Freeman looked inside Maldonado’s mouth he saw four or five plastic bags which he removed with forceps.

Maldonado continued to be given NARCAN, including during his transport to the hospital.

The complaint stated that Lara and Freeman provided the hospital false information regarding the sequence of events leading up to Maldonado’s loss of consciousness. Maldonado was declared dead at the hospital at 6:45 p.m.

Maldonado’s family claimed that during the exchange, Maguire, Lara and Freeman deprived Maldonado of his Fourth Amendment rights to unreasonable search and seizure, including excessive force, unnecessary infliction of pain and denial of adequate medical attention. Maldonado’s family also alleged that officers denied Maldondo his 14th Amendment rights by denying adequate medical attention, equal justice and access to the courts and deprivation of life and liberty without due process of law. The complaint states that officers “conspired together” to deny Maldonado his rights by filing false or misleading reports about the incident, the use of excessive force and the denial of adequate medical attention.

Although Karas opined that the court should limit the scope of Attalienti’s involvement as he was not present during the alleged use of excessive force, Karas wrote that Attalienti shouldn’t be removed from the case entirely, as he was the supervising agent under the claim of inadequate medical attention.

In October 2019, New York State Attorney General Letitia James released a report on the death of Maldonado, which exonerated the officers involved. According to the report, an autopsy by the Westchester County Medical Examiners office found that Maldonado’s death was due to acute mixed drug intoxication. The medical examiner could not rule out the presence of the glassine envelopes in the back of Maldonado’s mouth, his struggle with police, or the use of a taser in relation to his death.

At the request of the Maldonado family, Dr. Michael Baden, a private forensic pathologist, was hired to perform a review of the medical examiner’s autopsy report and found that Maldonado had died due to his interaction with police officers, rather than a drug overdose. Although Baden did not directly address the fact that Maldonado had placed permeable glassines in his mouth minutes before he became unresponsive, Baden suggested the high levels of toxicity found in Maldonado’s body were misleading, claiming that fentanyl levels taken from the heart may be higher post-mortem due to redistribution through the body. Baden suggested that pressure on Maldonado’s back from officers resulted in respiratory arrest and that the use of a taser caused cardiac arrest.

According to the attorney general’s report, there was no evidence to suggest that Maguire had placed any significant or steady pressure on Maldonado’s back and that, although he was found unresponsive after being handcuffed, he didn’t lose consciousness while being restrained.

Although the attorney general exonerated the officers of any wrongdoing, she recommended the Greenburgh Police Department amend its taser policy for people believed to be under the influence of narcotics, develop a mandatory investigation protocol when a death occurs, ensure that officers follow the department’s existing policy for body-worn cameras and clarify protocols for notifying family members if a civilian dies in police custody.

Greenburgh police Chief Brian Ryan told the Inquirer the department had updated its taser policy in the department’s police rules and regulations to reflect the attorney general’s recommendations. Ryan also said the department made a mandatory investigation policy designating the New York State Police as the lead agency to investigate officer-involved shootings, in custody deaths, or any case whereby a police officer used force that caused the death of an individual.

“Regular audit and inspection confirms that police officers are following the protocols with respect to their body-worn cameras,” said Ryan. “It should be noted that in 2017, when the incident occurred, [body-worn camera’s] were fairly new to the department. Continuous training and supervision has achieved compliance.”

Ryan also said that protocols for death notification were in place, with the department creating a sensitivity video to provide officers with the skills to make difficult notifications to family.

All the officers involved in the incident are working full duty and are in various assignments, which includes street patrol.

“As stated in the [attorney general’s] report, the officers were exonerated of any wrongdoing,” said Ryan.

Greenburgh town attorney Tim Lewis told the Inquirer that a partial denial of a motion to dismiss at this stage of the case was not unusual and there was a “very low standard under the Federal Rules of Civil Procedure to allow a plaintiff to proceed with discovery in a case.”

“The town remains confident that the town defendants in the case will be vindicated at a subsequent stage of legal proceedings,” said Lewis. “For anyone truly interested in learning the facts of the case, I recommend that they read the report of the attorney general on this matter.”

Greenburgh Town Supervisor Paul Feiner told the Inquirer he continues to believe the town was not at fault based on the attorney general’s independent review.

“[The] police did nothing wrong,” said Feiner.In previous media reports on the Maldonado case, Feiner called the case “frivolous.”

“It’s unfortunate that the town supervisor is publicly opining about this case in that manner,” said Cohen. “I think we’re all better off allowing the evidence to come in and the more evidence we uncover the more we feel that Jonathan Maldonado’s death occurred because of actions of Greenburgh police officers.”

Since the death of George Floyd, who died in police custody in Minnesota on May 25, thousands of protestors across the country have been calling for police reforms over systemic racism. Cohen said Maldonado’s case indicates that the public conversation about improving policing touches everyone.

“Although it may impact certain communities more than others, the case of Jonathan Maldonado, I think, tells all of us that this could happen to any of us,” she said.