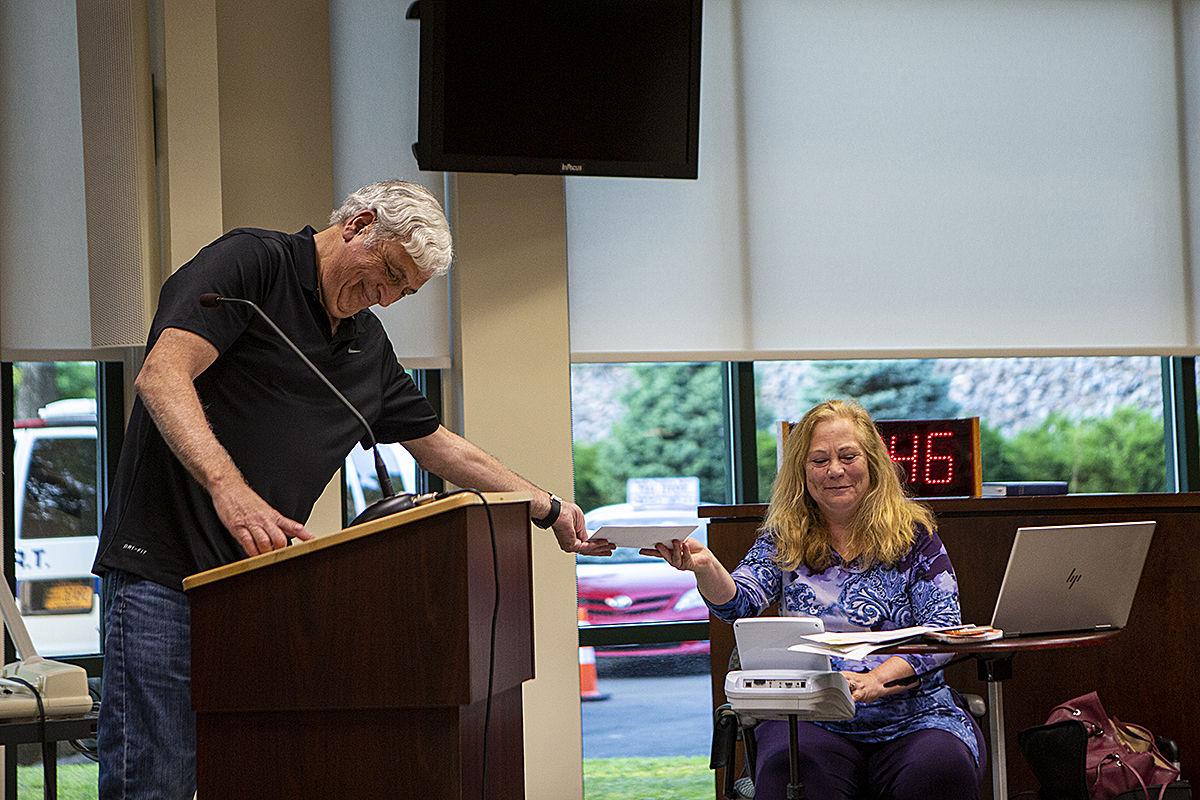 Michael Schwartz of Rock Hill Lane submits his objections to the town stenographer at the public hearing July 16. 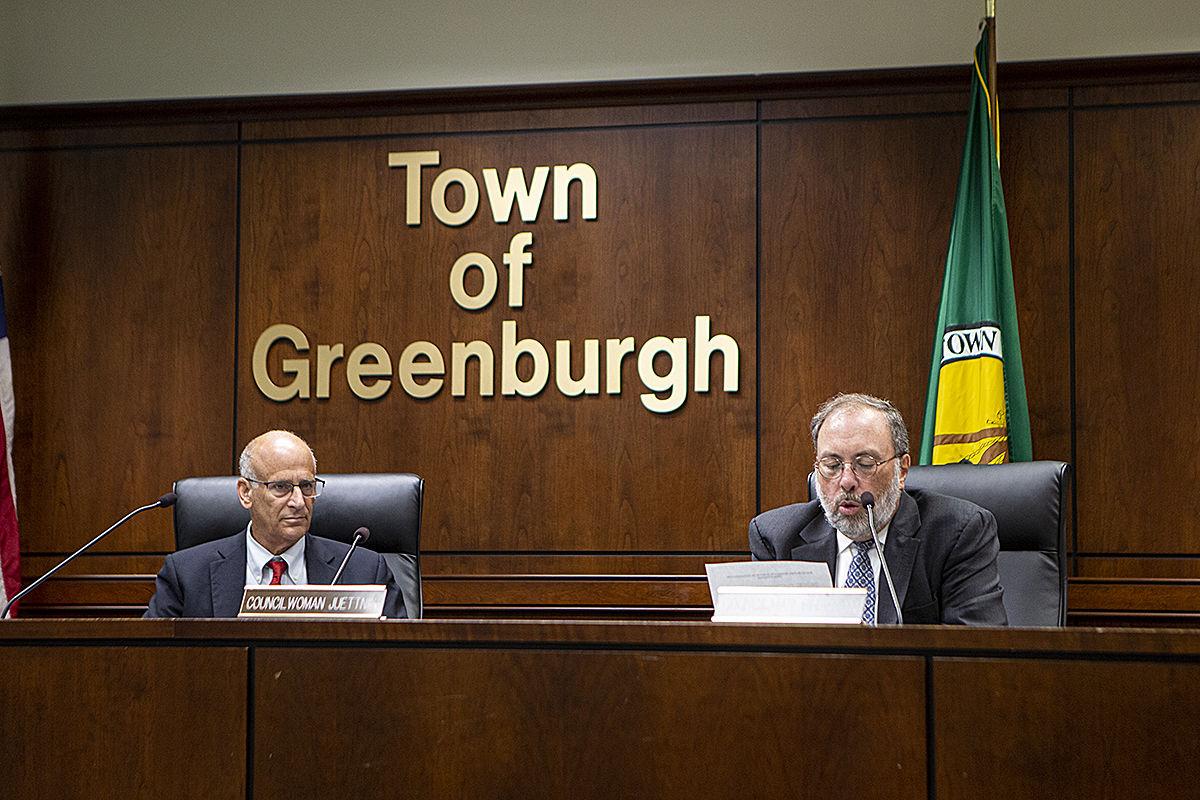 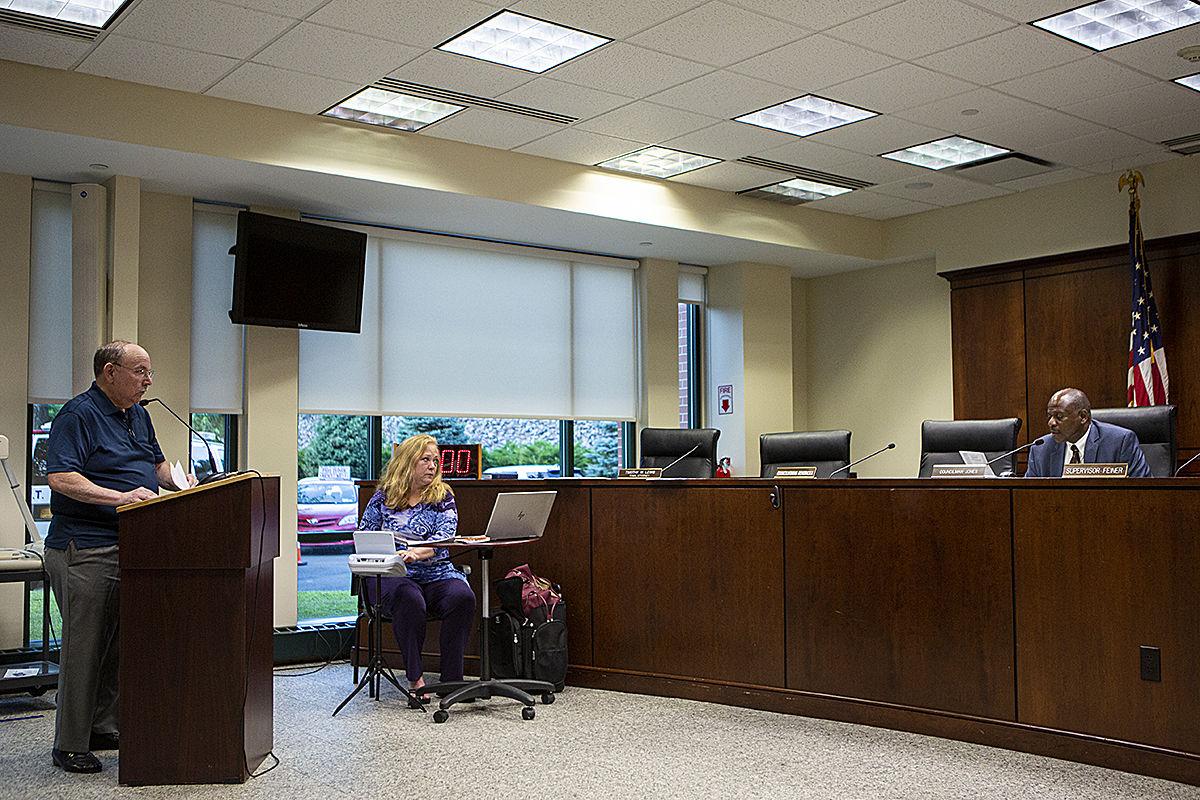 Hugh Schwartz spoke at the hearing. 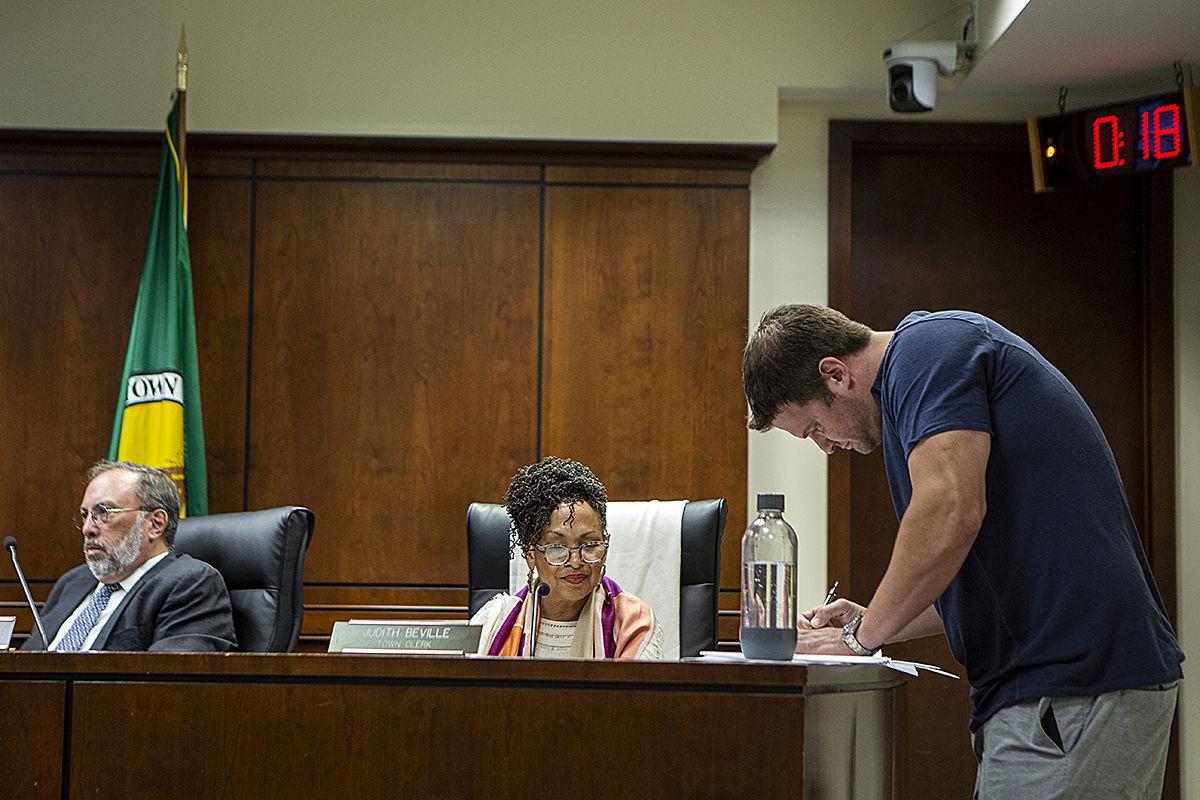 Jeff Sherwin at the public hearing.

As a standing room only crowd filled Greenburgh Town Hall with a hum of conversations on July 16, the dais stood empty, with only the stenographer seated at the front of the room and Town Attorney Timothy Lewis nearby. Then, as the clock struck 7:35 p.m., Supervisor Paul Feiner and former New York State Supreme Court Justice Robert Spolzino walked in to begin the public hearing — five minutes after the scheduled start time.

After a quick pledge to the flag, Feiner relinquished hearing proceedings to Spolzino. The hearing was required by New York State Village Law and would allow any Greenburgh resident who was qualified to run for a town office to voice and submit his or her formal objections to the Edgemont incorporation petition submitted to Town Clerk Judith Beville in May by Edgemont Incorporation Committee representatives Jeff Sherwin and Jon Lewis.

Spolzino, a known figure on both sides of the incorporation and anti-incorporation campaigns, was once again representing Feiner as he prepares to judge the legal sufficiency of the petition.

At the beginning of the meeting, Spolzino stated the rules for the hearing, which had been sent to residents by Feiner via email on July 15.

Before the town clerk could open the floor to the first speaker, Edgemont Community Council director Mark Lafayette called for a point of procedure, which Spolzino granted.

“It’s my position that this hearing was scheduled in violation of the petitioners’ rights under New York State law and that the acceptance of any objection at this hearing would also be unlawful under New York law,” said Lafayette. According to Lafayette, because the town posted the first notice of public hearing on June 10, the town gave six extra days for objectors to review the petition than allowed by the law.

According to New York State Village Law, a petition hearing must occur no less than 20 days, but no more than 30 days after the date of the posting and first publication of the notice. Because the notice was posted June 10, the July 16 hearing date would be six days more than the time allowed by law to issue notice about a public hearing.

The town had attempted to correct the issue by removing public notices Beville had posted June 11 at the Edgemont schools and local ShopRite and by amending the announcement posted on the website.

“You can’t just pretend that didn’t happen,” Lafayette said. “This isn’t a technicality. By law any objections were supposed to be filed in writing by last Wednesday, July 10. The petitioners had a statutory right to have a hearing on any of those objections as of that date.”

All six petition objections were submitted after July 10, which according to Lafayette would make them unsatisfactory.

In an article in the Inquirer [“E’mont incorporation public hearing date set,” June 21], Feiner said the June 10 posting was “an honest misunderstanding that was promptly corrected.”

The error occurred because of a miscommunication between the supervisor, town attorney and clerk.

“On [June 10], I wrote and sent several emails to [Feiner and Lewis] confirming that I would be carrying out their instruction to post the notices,” Beville told the Inquirer last month.

After saying Lafayette’s objection was noted in the meeting record, Spolzino opened the public hearing to the group of objectors.

According to Village Law, residents are allowed to submit objections if the petition includes a signature by any person who was not qualified to sign, does not include signatures from 20% of the residents in the territory or was submitted with signatures of individuals who do not own more than 50% in assessed real estate property in the territory. They can also object if the petition’s allocated territory is already part of a city or village, does not outline the new village to be more than five square miles, has less than 500 inhabitants or if it does not conform to the requirements of the article.

One by one, each objector present was called to testify.

Six Greenburgh residents filed objections to the Edgemont petition in writing, five of whom spoke at the public hearing. As of July 16 at 9:12 a.m. there were four registered objectors who wished to speak at the hearing, according to town clerk Beville, who read Chonigman’s written statement at his request. In addition, Hugh Schwartz signed up to speak with the clerk during the hearing.

“You do not have a petition that was ever signed by the signees,” said Schwartz at the hearing, referencing his written objection, which stated that the second petition was signed before most of the exhibits that were submitted were attached. Therefore, he said, the signers never saw the petition as submitted,  as required by law.

Schwartz also objected to the petition’s continued omission of children’s names — one of the main reasons Feiner rejected the previous petition in May 2017. The EIC sued Feiner in State Supreme Court, which ruled to overturn Feiner’s petition objections. The state’s Appellate Court later reversed the State Supreme Court’s ruling and the New York Court of Appeals denied to hear the case.

“The EIC was aware of this and yet still has not submitted a petition that has those names in it,” said Schwartz. “Many of those names were available publicly, a thousand of those students names were published over the last six years in The Scarsdale Inquirer and readily available on the internet.”

When he rejected the first petition in May 2017, Feiner retained the services of surveyor Steven Willard and title agency counsel John Martin at taxpayer expense to submit affidavits of their analysis of the maps of Edgemont.

Payson, an objector from Dobbs Ferry who has lived in the town of Greenburgh for more than 39 years, submitted his objection to the town stenographer and attempted to speak about the rights of the town’s residents to vote on the incorporation issue.

“I strongly believe it is improper, unfair and illegal to deny the residents … other than those in the petitioned for area, the right to vote on the issue of establishment of a village,” said Payson.

Spolzino interrupted Payson, and said the purpose of the public hearing was “to hear objections to the sufficiency of the petition, not to the process.”

As the line of objectors had their say, Beville told Feiner, Spolzino and Lewis that pro-incorporation individuals at the meeting had submitted requests to speak, and they were hoping to respond to the objections.

Spolzino said it was not a part of the statutory process to allow individuals to voice support for the petition during the public hearing.

“Folks who want to speak in support of the petition are out of order,” he said.

EIC president Sherwin raised his hand when Feiner asked the audience if there were any more objections.

Referencing Village Law, Sherwin said he would provide testimony related to the objections made at the hearing. Before Sherwin could finish his statement, Feiner abruptly ended the hearing and quickly exited the hall through the back door.

In an uproar, people stood up and began shouting.

“Shame on you,” yelled a woman in the audience.

“You can’t handle the truth,” a man yelled.

The public hearing ended after 28 minutes.

“I think the two [objections] I brought are very serious. [The EIC] clearly did not submit the petition that was signed … and [they] did not make a real effort to get the names of the kids,” Hugh Schwartz told the Inquirer after the hearing. “I can even say, fine if you want to keep [the names] private, just put the addresses in or submit it under seal. They did none of those things.”

Schwartz said he had not spoken with the other objectors and didn’t know exactly what they had submitted in their objections to the petition.

“On the list of regular inhabitants, there are children’s names and addresses where the parent gave us consent,” said Sherwin. “We don’t believe that the law, nor the courts, are saying that in order to have a right to vote we have to invade children’s privacy.”

In December 2018, Sherwin submitted a Freedom of Information Law request with the Edgemont Union Free School District to provide a list of names of all the children who reside in the district. The school district rejected its request citing the 1974 Family Educational Rights and Privacy Act.

The EIC also attempted contacting Edgemont residents for children’s names through email blasts, social media and in the Inquirer, according to Sherwin.

“The process is supposed to give support to both sides,” said Sherwin. “Denying us our right to actually complete the record, when there was clearly false information given, I think is absurd.”

In his comments at the hearing, Sherwin referenced section 2-206 of Village Law, which states, “Testimony as to objections may be taken at the hearing which shall be reduced to writing and subscribed by those testifying.”

Feiner now has 10 days to release a decision on the petition’s sufficiency.

“I have to read all the documents. I have not read everything yet,” Feiner told the Inquirer.

Feiner said he assumed the decision would be submitted on the town website by the last day allowed by law, which in this case is July 26.

“The attorney doesn’t want me to discuss any aspects of the hearing with anybody,” said Feiner when asked whether he had contacted any of the objectors before the hearing on July 16.

Schwartz said even though he doesn’t agree with the EIC, he does believe people should be given a chance to read the objections and dispute them at another hearing.