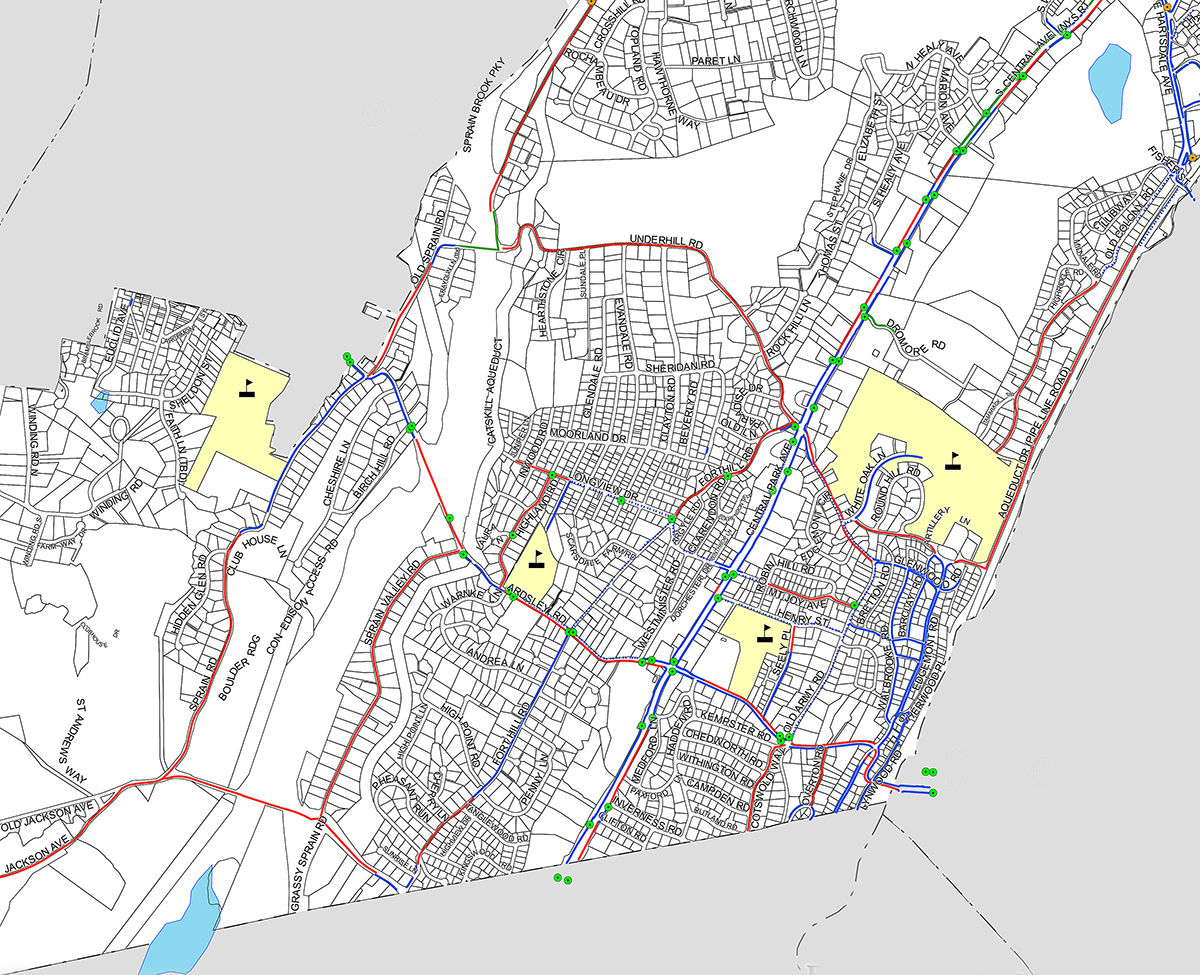 The Phase 2 plan is to fill in 1.36 miles of sidewalk gaps in Edgemont. 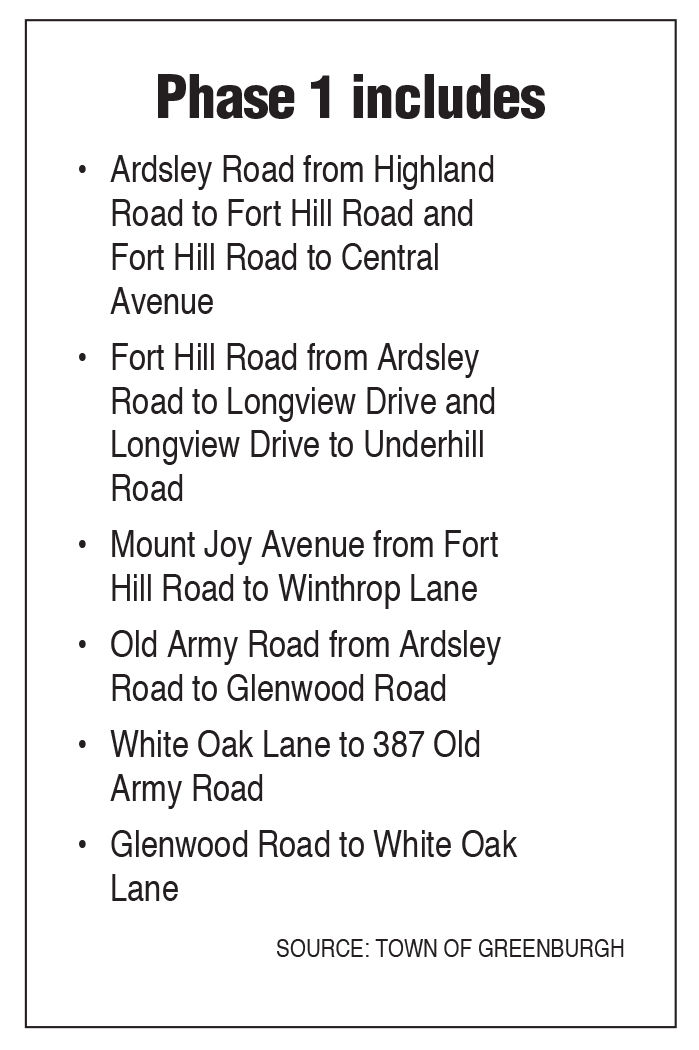 After multiple community meetings and research that spanned a six-month period, the town of Greenburgh Department of Community Development & Conservation released a sidewalk prioritization study that strategizes a two-phase, 12-year rollout to fill 9.93 miles of sidewalk gaps within the town at an approximate cost of $20.5 million.

“It’s a planning document. This is not a document that you take straight to capital and then start assigning projects,” said Garrett Duquesne, commissioner of Community Development & Conservation. “It was such an undertaking to even figure out what … should be [done] in the first six years.”

Sidewalk safety policy was pushed to the forefront of the Greenburgh Town Board agenda after a 67-year-old Edgemont woman was killed at Fort Hill and Underhill roads in November and residents in Edgemont began pressing for more safety measures. Since the accident, Duquesne, Department of Public Works Commissioner Victor Carosi and Greenburgh Town Supervisor Paul Feiner met with multiple Edgemont organizations throughout the development period of the sidewalk prioritization study to gain community feedback on which sidewalks needed to be prioritized.

In February, the Edgemont Community Council formed a Pedestrian Safety Committee and submitted a three-year, three-phase sidewalk build-out plan to Duquesne during an ECC meeting. The plan outlined multiple major arteries within the town that need sidewalks in order to connect the schools and allow people to walk safely to the Central Park Avenue corridor.

“This is a launch point for a discussion. It’s going to be vetted by various agencies; we’re going to post it on the website. We want people to read it, we want people to comment,” said Duquesne referring to the draft study.

Colin McCarthy, a member of the ECC’s Pedestrian Safety Committee, told the Inquirer that it was encouraging that the town and the ECC were making progress toward safer sidewalks in the hamlet but added that the committee was disappointed more money wasn’t being allocated yearly for the projected sidewalks.

“Obviously everyone’s mind is somewhere else right now [and] we’re sensitive to that … but we want to make sure that this doesn’t get forgotten,” said McCarthy.

The study breaks down sidewalk construction in a two-phase process over 12 years. The first phase, which would take six years, plans to cover 25,860 linear feet, or 4.93 miles of sidewalk gaps townwide, at a cost of $10,344,000, or approximately $1.74 million spent per year.

“[The study] gives the town $24 million of sidewalk building, where we know we have $97 million of need in the town,” said Duquesne. “It just shows you that if you made that $2 million-a-year commitment, you’re doing basically 25% of the sidewalks [that] are identified in the report that are high priority.”

Hartsdale has approximately 2,300 linear feet outlined in first phase construction at a total cost of $920,000, with sidewalks on Caterson Terrace from E. Hartsdale Avenue to Charlotte Place and on North Washington Avenue from Fox Glen Drive to West Hartsdale Avenue.

Phase 2 (see map) outlines filling gaps of 25,500 linear feet, of which approximately 7,200 linear feet, or 1.36 miles are in Edgemont, at an approximate cost of $2.9 million. Phase 2 would include sidewalks on Henry Street from Central Park Avenue to Old Army Road; Longview Drive from Juniper Lane to Fort Hill Road; Mount Joy Avenue from Central Avenue to Old Army Road; and Old Colony Road from Club Way to Midvale Road.

The study prioritizes about 10,400 linear feet of sidewalk gaps in Hartsdale at an approximate cost of $4.2 million. Phase 2 includes sidewalks on Dalewood Drive from the Westchester Square Shopping Center to Warburg Campus; Eastway from Secor Road to Ardsley High School; Secor Road from the Greenburgh Housing Authority to Essex Place, from Essex Place to Milton Street and from Whittier Street to West Hartsdale Avenue.

In addition to taking community feedback and figuring out population density, active development proposals and automobile and pedestrian accidents, the study designated priority sidewalks by also finding out which sidewalks were in a close proximity to schools, transportation nodes and parks. Gathering all that data, Duquesne priced out each linear foot at a cost of $400 based on bids from previous sidewalk projects and was able to formulate a list of priorities.

Duquesne said the study will continue to evolve, especially now in light of the COVID-19 pandemic, as 90% to 95% of the study was finished prior to the outbreak.

Lucas Cioffi, chair of the town’s Traffic and Safety Committee, told the Inquirer that he had asked Duquesne for a copy of the draft report on March 25 so a pedestrian safety sub-committee could look it over. Cioffi said he never received the report.

“I think it’s great that they’re publishing a report in draft format and now the hard work begins to … actually build those safety enhancements,” he said. “We hope the town will be forthcoming with information about their process so that we can find deficiencies and learn best practices from other municipalities.”

Duquesne said the draft report was completed on April 8 and was sent to Cioffi “on behalf of the Pedestrian Safety Committee” on April 9.

Feiner has not publicly announced the completion of the study. According to Duquesne, the department is issuing a “soft rollout.”

Given the outbreak, Duquesne said more feedback would be sought as the town considers allocating funds for building sidewalks.

“In a non-COVID world I think we would get right to the nitty gritty,” he said.

Feiner told the Inquirer he didn’t anticipate “doing any capital projects this year.”

In a town board work session on April 20, Comptroller Roberta Romano said the town was projecting a $7 million revenue shortfall — $2.4 million from the A budget and $4.6 million from the B budget.

“Everything is going to really be deferred,” said Feiner, referring to sidewalk construction and capital projects. “If it turns out we get a big federal stimulus funding, then we would start early, but at this point the federal government hasn’t said anything.”

As the town’s focus has moved to containing COVID-19, Feiner said he is not considering sidewalk construction now but, in his view, the economy is “going to rebound” and he sees “more of a year delay rather than a long-term delay.”