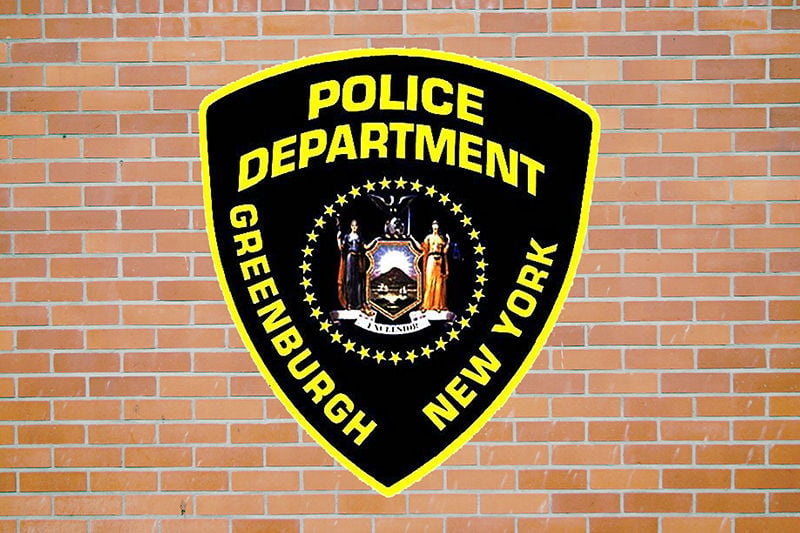 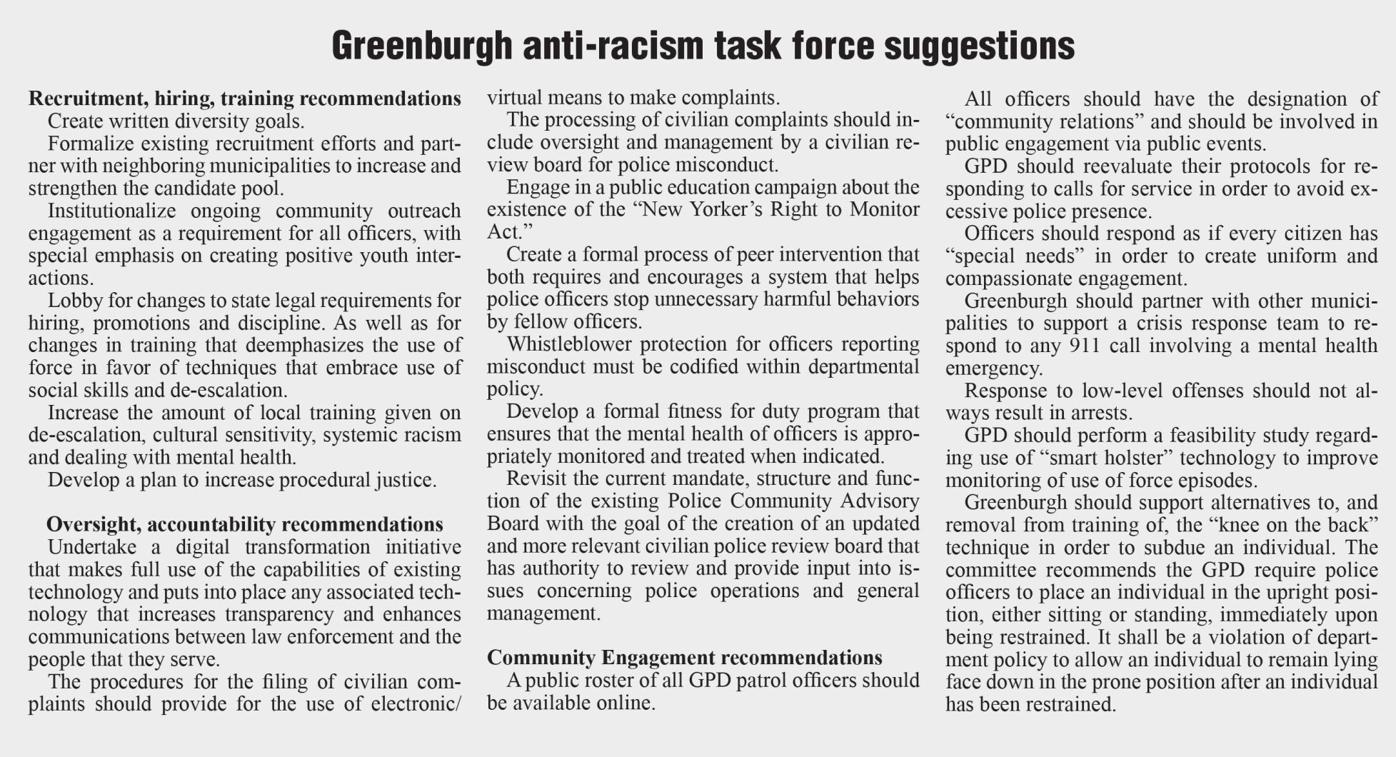 After the killing of George Floyd by Minneapolis police officers in May of last year, New York Gov. Andrew Cuomo issued an executive order that required all municipal police departments in the state to consult with community stakeholders to create a plan and implement recommendations to review and modify policing practices.

In Greenburgh, the town board formed the Greenburgh Against Systemic Racism Task Force (GASR), which is headed up by Councilwoman Gina Jackson.

The task force was split into three subcommittees to focus on separate areas of expertise. The subcommittees covered recruitment, training and promotions; oversight and accountability; and community engagement.

The task force released a 103-page report in February, which outlined multiple suggestions and improvements that both the police department and town could make for more equitable policing (see recommendations).

The report found that members of Greenburgh’s minority community, nonminority community and youth all shared a fear of interacting with the police and that neighborhoods were suffering from overpolicing, with a number of white teenagers reporting that their Black friends were treated more roughly than they were during police encounters.

“Following four months of research [and] solicitation of community input and discussion, it was determined that fear of interaction with our police officers existed among members of our community,” said GASR co-chair Howard Tribble. “We must remember that uniformed police officers can be intimidating.”

In a focus group conducted with young adults in Edgemont from July, students said they felt confused about when to call police for help and that they felt frustration and anxiety about how to report an officer if something were to happen.

“If [you] report the police, you’re calling the people who made you unsafe in the first place,” said a student in the report.

The group of young adults said that even though police are part of the school’s annual cybersecurity, driver safety and school shooting preparation assemblies, students didn’t have meaningful interactions with officers, and they felt “distant to them.”

Students said they wanted officers to visit small classroom settings to have an open discussion about policing, to discuss students’ rights if they were to get arrested and to explain how to file a complaint against an unwieldy officer.

Students shared positive, neutral and negative face-to-face interactions they had with police officers. A white woman reported she became distressed after a police car followed her home, and a woman of color said she was questioned on homecoming night after police saw her and a large group of friends.

Of the respondents, 44.8% were white, 29.1% were Black, 7.3% were Hispanic and 21.2% preferred not to divulge their ethnicity. The results of the survey were not disaggregated by race, gender or age.

To improve trust and relations with the community, the recruitment, hiring and training subcommittee recommended that although the department had been making efforts to diversify the force, and the racial diversity within the department matched the composition of the town, the department needed more women and people of color in the police department and in supervisory positions.

The subcommittee recommended that the department offer newly hired officers financial incentives to live in Greenburgh and to use assessment tools to identify if a candidate has a tendency to be racist, overly aggressive, short tempered or overly judgmental.

The committee also recommended the town lobby the state and county to raise the minimum hiring age to 24 years old.

Lt. Kobie Powell, a lifelong resident of Greenburgh, who is in charge of hiring, said he was in favor of hiring officers who grew up in the town, but that any requirement for officers to live in the town or county could negatively impact the hiring pool. He also said that raising the age for hire to 24 years old would also have a negative effect.

“Besides myself, the department has several other officers with an excess of 20 years on [the force] that were hired before the age of 24,” said Powell. “The issue isn’t in the number but in the maturity, sense of responsibility and character of the individual. The hiring process does help determine who may or may not be ready for the responsibility of the position.”

Powell said the department was limited on who it could hire by who took the police exam. He also said increasing outreach to the community to encourage residents to take the exam would be beneficial.

According to Powell, of the 18 officers he has hired, two-thirds were white men, with the remaining one-third being Black, Hispanic and women. He also processed another 20 applicants who weren’t hired; 50% of those applicants were white, 30% were Hispanic and 20% were Black. Two women of the six who applied were hired.

“I want people to understand that I look at every hire the department makes as someone that could be interacting with my mother, my children, and my relatives and friends,” said Powell. “More importantly, the health, safety and lives of my family members could wind up depending on these individuals. I truly try to do the best I can to get the best human being available.”

The oversight and accountability subcommittee recommended that the town revamp the police and community advisory commission to become a civilian police review board, which would have the authority to review and provide input on issues concerning police operations and management.

The subcommittee also recommended that the town engage in a public education campaign to encourage the disclosure of bad policing, similar to the mantra, “If you see something, say something.”

Lt. Norman Hall said no section of the unincorporated area was overpoliced and the department had increased presence only after a request was made in the community. Greenburgh Police Chief Chris McNerney said the department was taking a reactive approach to policing as compared to a proactive role.

Hartsdale Neighbors President Eric Zinger shared his concern that the department couldn’t talk about systemic racism without also talking about the war on drugs, which has been waged upon poor communities of color. According to a Freedom of Information Law request Zinger obtained from the department, of the 22 marijuana-related arrests in 2019 and 2020, 86% were people who were Black or Hispanic.

“If we want to address systemic racism, we have to talk about the drug war,” said Zinger. “I’m asking tonight to come to the reasonable conclusion that people in Greenburgh should no longer be arrested for possession of marijuana.”

McNerney said the data definitely warranted an explanation and further analysis but that “there was more to it than just the numbers.”

Manni Areces, the president of the Juniper Hill Civic Association, said systemic problems required systemic solutions and suggested that the town go beyond strengthening the review board and install a commission that would have complete oversight of the department.

“Police policing police doesn’t work,” said Areces. “It should be catalogued and kept outside the police department.”

Jackson, who heads up GASR, said the work of the task force wasn’t ending here; she said it would be a continual process to take recommendations back to the table for discussion.