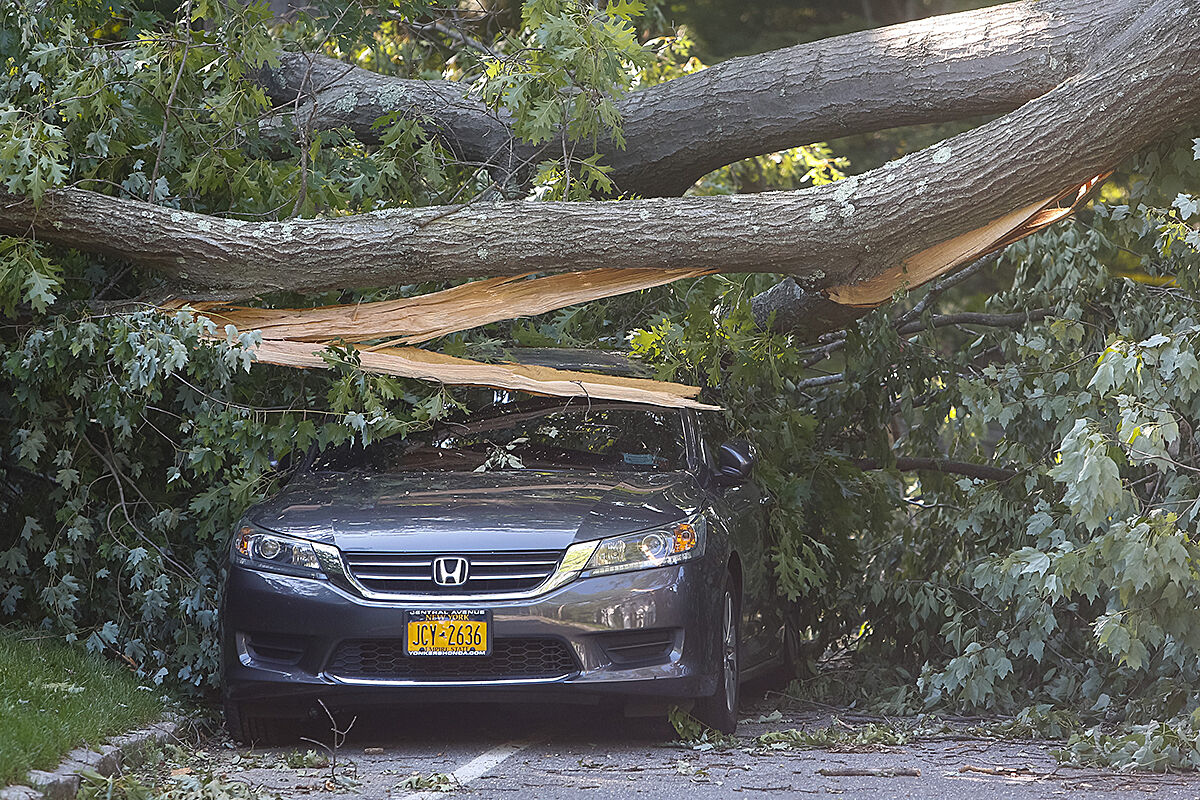 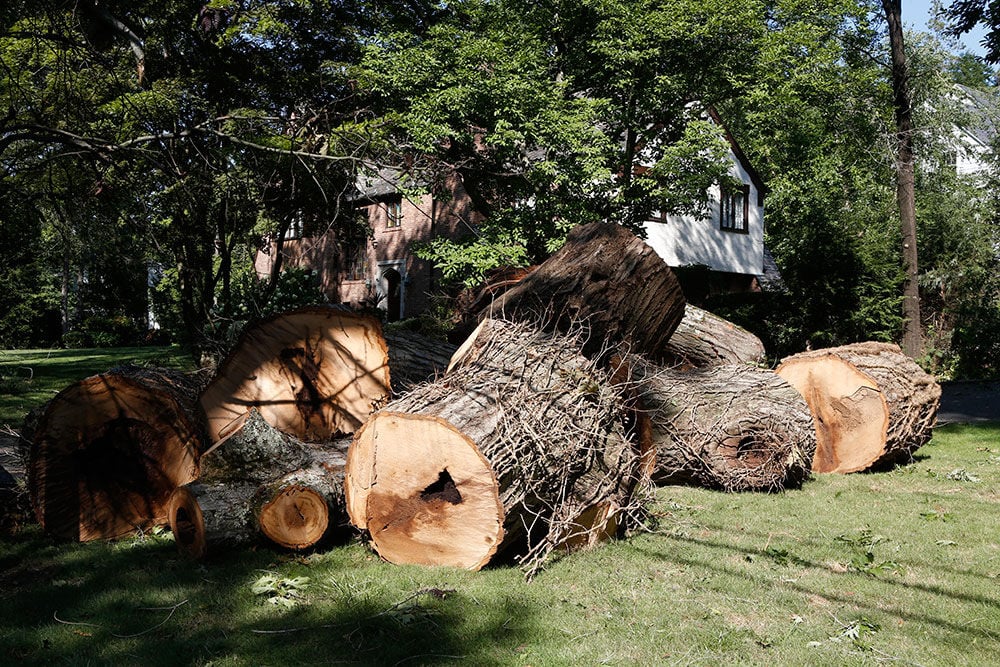 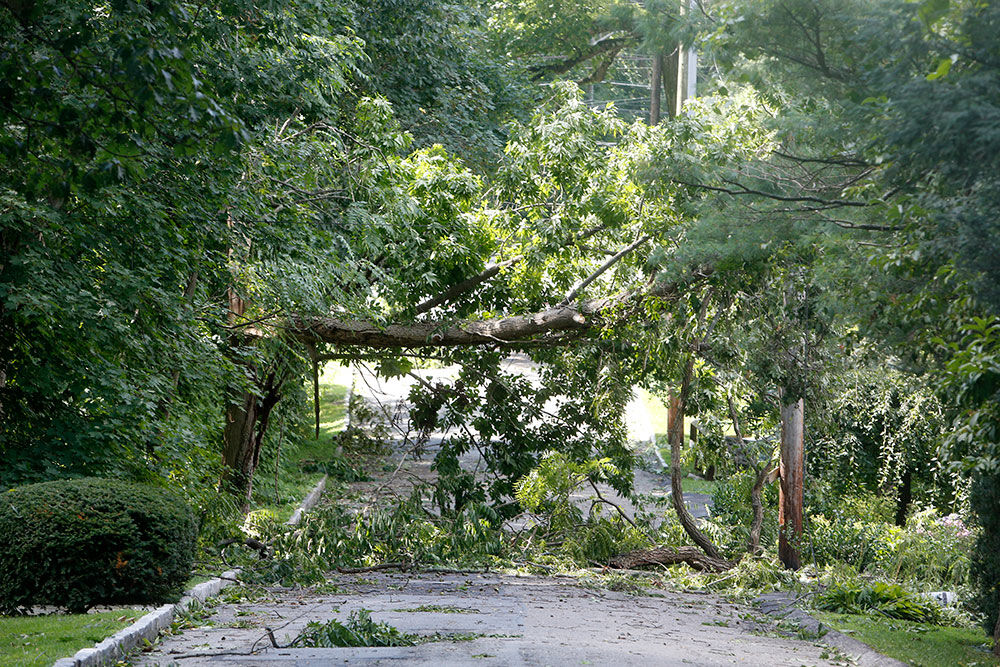 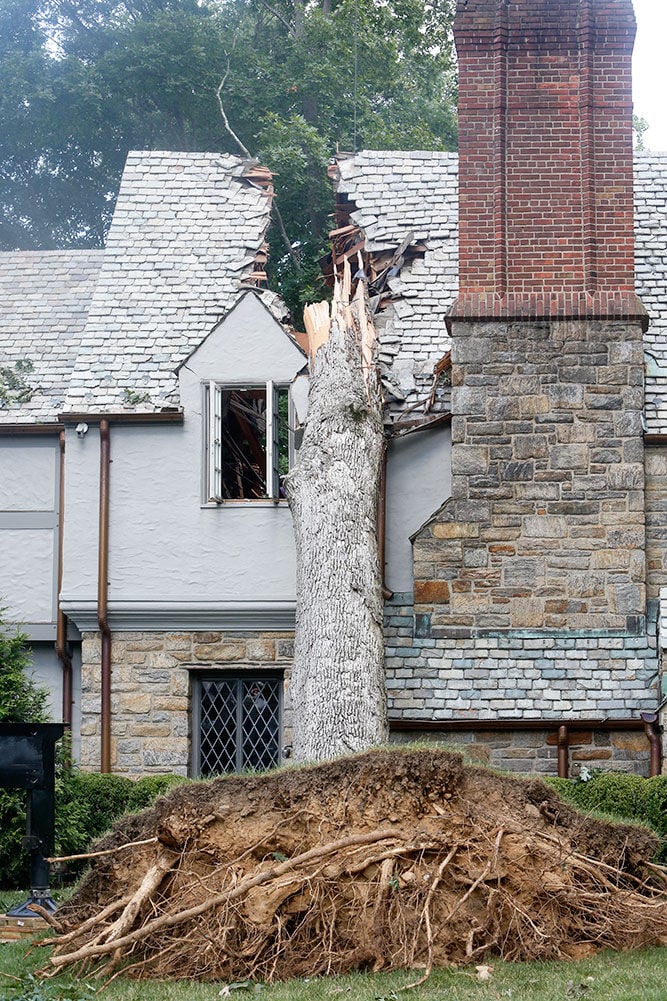 A tree sliced through a Whig Road roof. 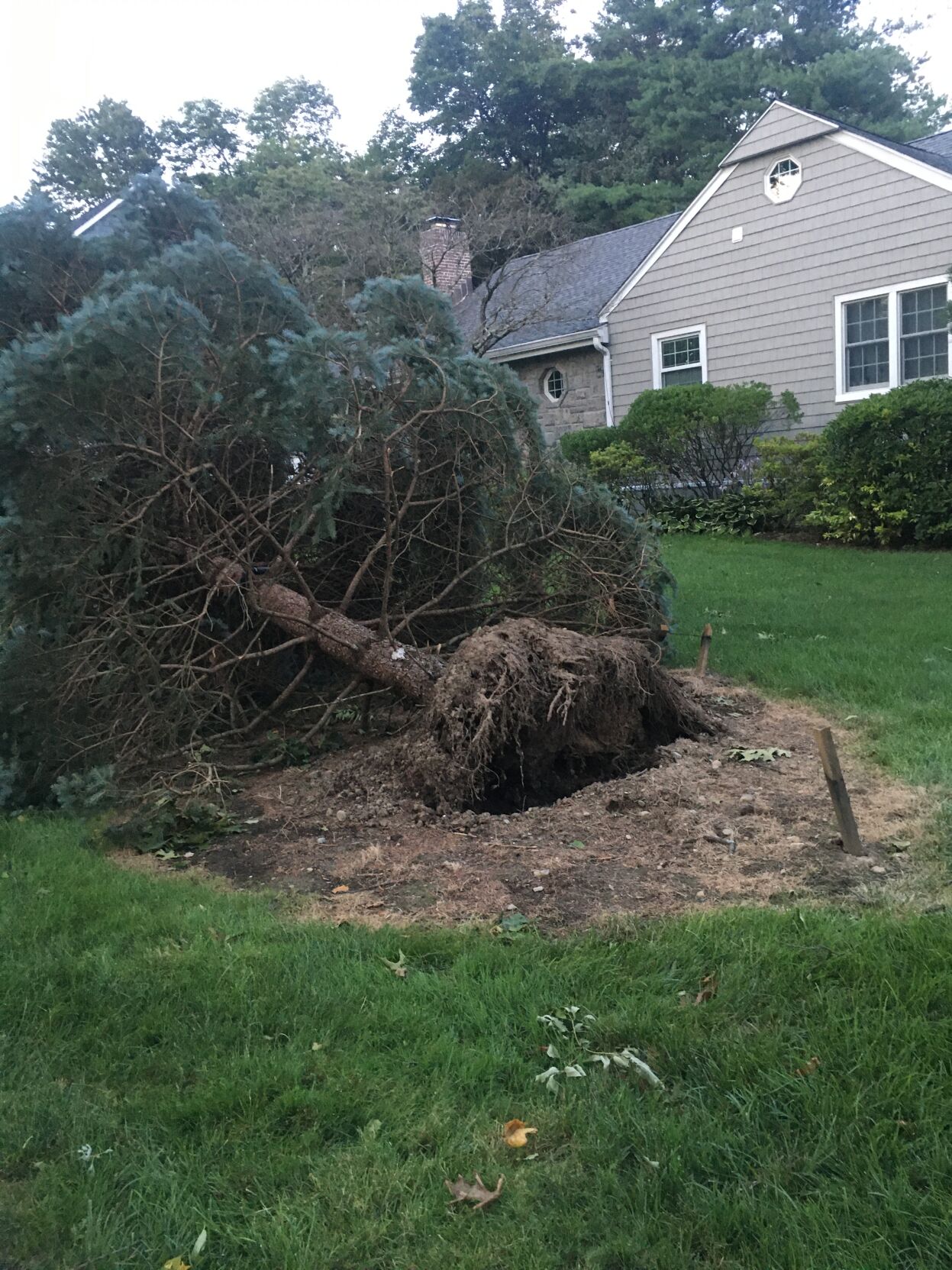 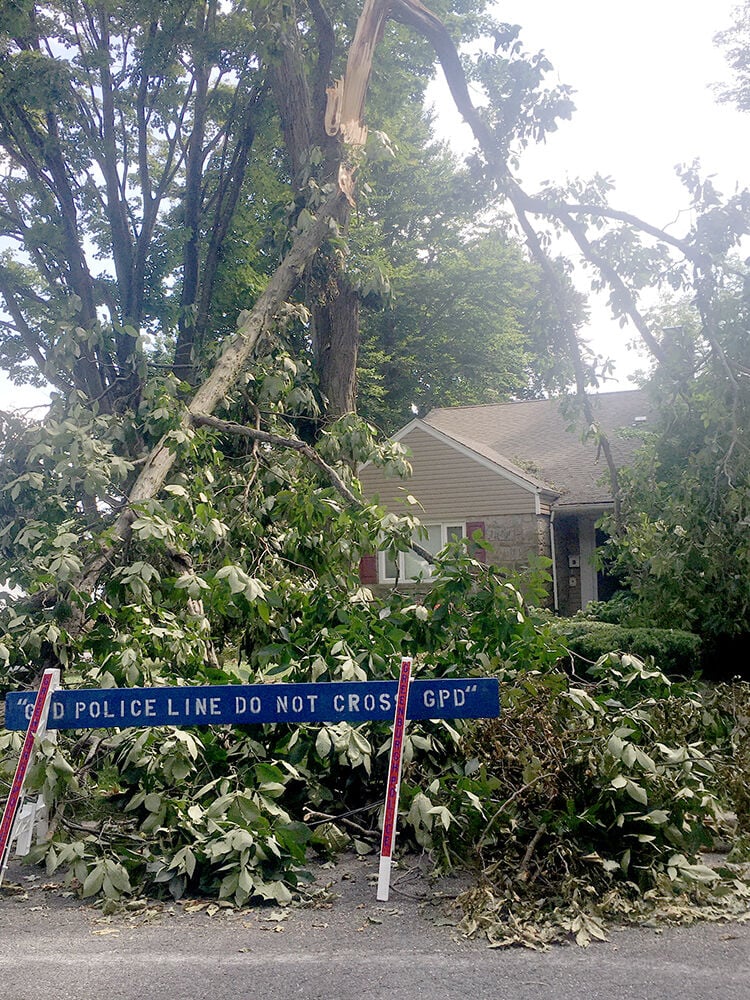 A tree sliced through a Whig Road roof.

More than 2,100 residences and businesses in Scarsdale and 5,000 in Greenburgh lost power as Tropical Storm Isaias tore through the area Tuesday, Aug. 4. About 1,500 in Scarsdale still faced outages as of 9 a.m. Thursday, and numerous roads remained closed while cleanup of downed lines and trees continued.

“The storm we experienced yesterday ranks third [now ranked second, surpassing Hurricane Irene], behind only Hurricane Irene and Superstorm Sandy, in terms of impact,” Village Manager Steve Pappalardo said in a robocall to residents Wednesday. During the storm Tuesday, the Scarsdale Police Department handled more than 1,200 requests for service, deploying virtually all of its personnel in the field for response. Boniface Water Tower and the Public Works Central Garage remained without permanent power Wednesday, with Boniface Water Tower operating on backup generator power.

“We’re working hard to address serious public safety issues and to get service restorations expedited as much as possible,” Deputy Village Manager Robert Cole told the Inquirer Thursday morning, and he said in a phone conference with municipal leaders, Con Ed advised the target for restoring service to the vast majority of customers is Sunday, Aug. 9, though some outages will continue into next week.

Official reports clocked top winds of 70 mph as the storm raced through the tri-state area at a pace of 35 mph. Heavy rain caused flash flooding and high winds toppled massive trees and snapped utility poles, leaving residents — many of whom were working from home due to the pandemic — without electricity, air conditioning and internet service.

According to Cole, Scarsdale began storm preparations last week by contacting its Con Ed muni-representative to establish communication protocols. “Some of our municipal peers have yet to do so and are having difficulty obtaining a representative at this point,” he told the Inquirer. “In addition, DPW prepared all of their trucks and equipment, initiated proactive catch basin cleaning in areas subject to flooding, and lowered levels in certain watercourses serving as detention basins to accommodate more water without flooding.”

The 1 to 4 inches of rain predicted never materialized. However, wind gusts resulted in the closure of sections of 45 roads in Scarsdale, with eight impacted by live wires mixed in with downed trees and/or branches, according to Cole.

On Wednesday night, crews cleared live wires and reopened Post Road in two separate locations. Workers connected generators to traffic signals at Post/Burgess and Post/Sherbrook to ensure traffic signals on Post Road were functioning, even though power was not yet restored along part of that route, which rectified a “major traffic safety concern,” Cole said.

He said village crews worked late Tuesday night and all day Wednesday, continuing Thursday, opening most of the balance of roads not impacted by live wires. Con Edison sent 28 crews to the village Wednesday to “cut and clear” and 230 line personnel worked to restore power lines after tree removal.

“We were able to de-energize and clear trees and debris from four more locations yesterday.  Power restoration is a longer process, but at least the roads are open. Weaver is among last night’s and today’s priorities,” he said Thursday, as Weaver Street is a major thoroughfare and its closure had a significant impact on traffic in surrounding residential areas.

Town Supervisor Paul Feiner reported Greenburgh was particularly hard hit; the storm left almost 5,000 customers without power and 4,500 were still in the dark Thursday. He said he received hundreds of calls and messages from residents who were “very upset.”

“The town is doing the best we can,” he wrote in an email the day after the storm hit. “We are encouraging Con Ed to expedite the restoration.” The utility company told municipal officials In a conference call Wednesday that it was short-staffed and it was waiting for more crews to come in from around the country to help with the work to restore power.

With more than 120,000 customers affected by power outages in Westchester and nearly 1 million statewide — 700,000 still to be resolved as of Wednesday — New York Gov. Andrew Cuomo launched an investigation into the utility companies’ response and the companies’ apparent lack of adequate planning. He also declared a state of emergency on Aug. 5 in Westchester and its contiguous counties, which allows state agencies to provide direct support to local governments.

After making landfall as a Category 1 hurricane in the Carolinas Tuesday, the system was downgraded to a tropical storm, but it affected a dozen states and tore through the Northeast in just six hours. More than 3 million homes and businesses lost power, and the fast moving storm dumped extensive rain and packed damaging 80-90 mph wind bursts as it merged with the jet stream, similar to what happened during Hurricane Sandy in 2012. Hurricane season typically runs from August through early October and 2020 is shaping up to be the second most active hurricane season on record with forecasters predicting at least two dozen more storms as the Atlantic Ocean continues to heat up.

Time to breakup this monopoly. “Conned” has proved once again that it is unreliable, unprepared, unconcerned inefficient, inept, insensitive . To inform residents that they might lack power through Sunday evening and then add a coda for “some residents may be without power as late as Wednesday while sending out a breakdown of ConEd’s financial responsibilities vs the homeowners’ responsibilities while thousands of $ of food was rotting in our fridge is colossal nerve and Inappropriate. Why frighten people about needing licensed electricians, a major expense major and unexpected expense at a time that so many are depressed,out of work and without power. Why didn’t ConEd line up crews in advance knowing this storm was going to be a humdinger?

Once more we know that Outage = Outrage