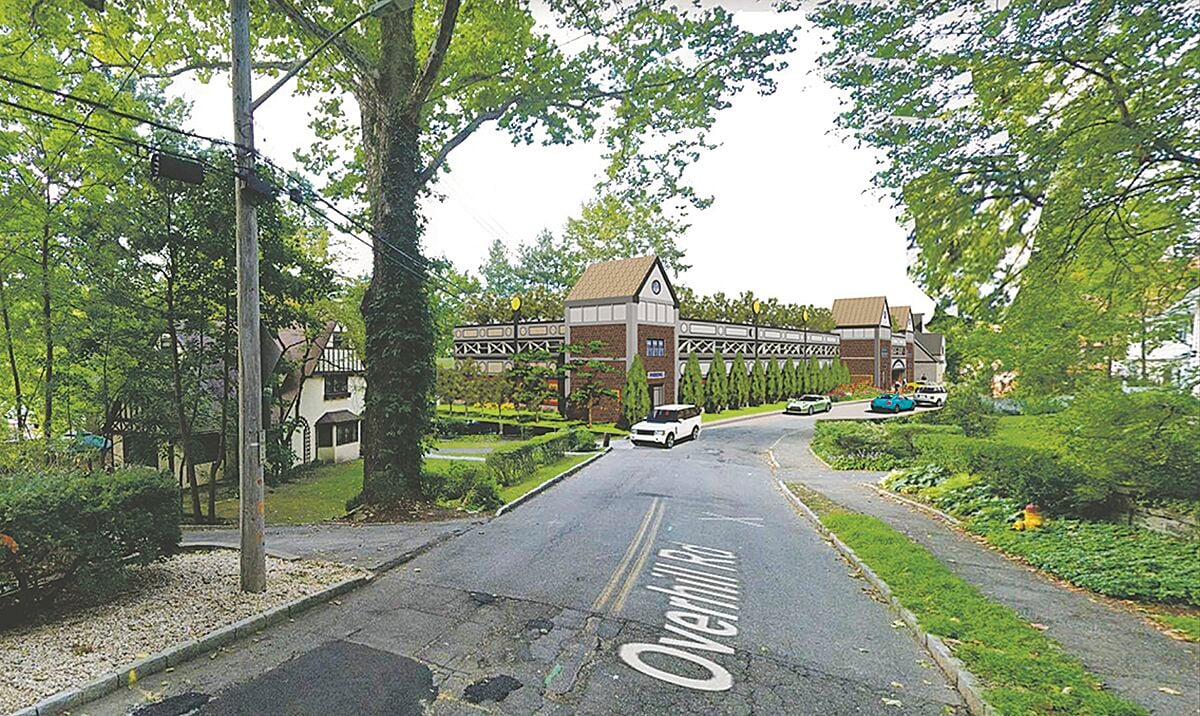 The plan for the proposed garage’s exterior will eventually be presented to the Board of Architectural Review for approval.

The plan for the proposed garage’s exterior will eventually be presented to the Board of Architectural Review for approval.

Droves of residents tuned in to a virtual planning board meeting on July 29, mostly in opposition to a project proposed by Scarsdale Improvement Corp. to construct a 135-space three-story private parking garage on Overhill Road.

Residents and members of the Overhill Neighborhood Association (ONA) challenged the project citing traffic concerns, potential zoning issues, the incongruous nature of the project with the village’s comprehensive plan and the potential for segmentation if and when the corporation decides to build 15 condos on 30 Popham Road.

In May, Scarsdale Improvement Corp. submitted an application with Scarsdale’s planning board to build a 55,000-square-foot three-story parking garage adding one floor down and one up, which would service the corporation’s tenants, employees and customers for the adjacent retail locations on Scarsdale Avenue. The plan also included the construction of a 6,000-square-foot health club facility in the basement of 30 Popham Road.

Sharing a 13-slide presentation with the board on Wednesday, former ONA president Paul Diamond presented multiple arguments against the project. Citing case law on segmentation, he said the applicants were not presenting the full scope of the project. In October 2019, Scarsdale Improvement Corp. envisioned a plan to build 15 condominiums above 30 Popham Road on the site adjacent to the proposed private parking garage.

Earlier this month in the Inquirer [“Planning board to review first phase of proposal to reimagine downtown,” July 17] Brad Schwartz, a lawyer representing the corporation, said the corporation believed that adding residential units at the site made “a tremendous amount of sense,” but the plan had been postponed for a later date.

According to Diamond, the project was incongruous with the village’s comprehensive plan, which recommended that parking solutions be linked to the development of the Freightway site, that pedestrian arcades be kept intact and that any development should adhere to the character of the village and be sensitive to the adjacent residential area on Overhill Road.

According to Andrew Brodnick, a lawyer retained by the Overhill Neighborhood Association, the village’s zoning requirements prohibit the proposed garage from being built as the applicant intended, because building it to provide parking for tenants and employees who work on other properties would no longer classify the garage as an accessory building.

The zoning code also states that construction of more than one level of parking at or above the ground floor level should be avoided in any VCR or VCO district.

Many speakers also said they believed the existing parking lot on the site was already underutilized and extra parking wasn’t needed.

Residents Robert Berg and Michael Shapiro said the 135-space parking garage was beyond the needs of the community, and questioned whether an ulterior motive was at play.

“If [they’re] allowed to build this three-story parking facility, I believe we can expect more office to residential apartment conversions with a concomitant impact on our school population and our school property tax as well as increased demand for municipal services in the downtown area,” said Berg. “It seems to me that the only real economic value to a lot of the buildings and space in the downtown area is really residential apartments.”

Schwartz said Rush Wilson, the owner of Scarsdale Improvement Corp., and DJ Petta, the corporation’s operations manager, had been “crystal clear and transparent” in their motivations behind the garage.

“A lot of the comments tonight that suggested there’s these grand schemes and hidden motives, it’s just not true,” said Schwartz. “There’s no hidden ball trick.”

“I think it is being [overlooked] how much this parking lot is really used on a day-to-day basis,” he said.

Schwartz said the corporation would be responding in writing to all the complaints brought forward by residents and the neighborhood association. Diego Villareale, the engineer for the project, said he was in the process of conducting a traffic analysis and site distance plan as the application moves forward. Because of the pandemic, Villareale said the traffic analysis would rely heavily on past traffic reports and accident data.

During planning board deliberations, board member Jack Miller said from the initial presentation the property seemed to not comply with zoning guidelines, was too tall and larger than nearby structures, and he noted that no community members out of the meeting’s roughly 55 attendees had expressed support for the project.

“I think we’re a board that has to pay attention to the legalities, but also how people feel about things,” he said.

Scarsdale Village Planner Greg Cutler said there would need to be an official determination on whether the proposed project is zoning compliant.

Planning board chairperson John Clapp asked town attorney Daniel Pozin whether it would be proper for the board to look at the potential entirety of the phased project, which included the possibility for the future construction of 15 condos.

Pozin said the applicant would need to prove to the board that the previously disclosed phased plan was no longer an option and he said the applicant would be putting the possibility of formulating a second phase at risk if they did not present a fuller project at present; an overdevelopment of Phase 1 could eliminate the possibility of any subsequent Phase 2, he said.

“Segmentation is to be avoided” in these types of proposals, said Pozin. “There is permissible segmentation [but] I don’t know if this would fall into that category … but again, the applicant is telling you they’re not doing it, [so] it’s hard for this board to go with public sentiment that just says, ‘Well, we know them, they’re going to do it.’”

Board member Harold Porosoff said he was troubled that the economics of the project didn’t seem to make sense, as the applicant planned to build a parking garage worth millions of dollars to seemingly not get any revenue.

“Overbuilding the garage certainly makes it look like they’re providing parking for future development,” said Pozin. “That’ll have to be judged by this board before it makes any determinations.”

The board voted to continue the public hearing on the application at a meeting on Sept. 23.