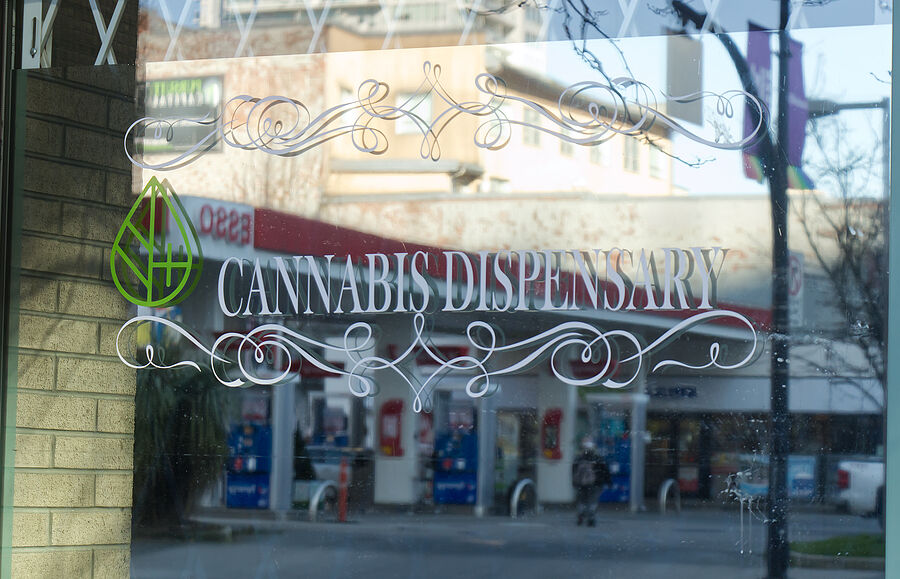 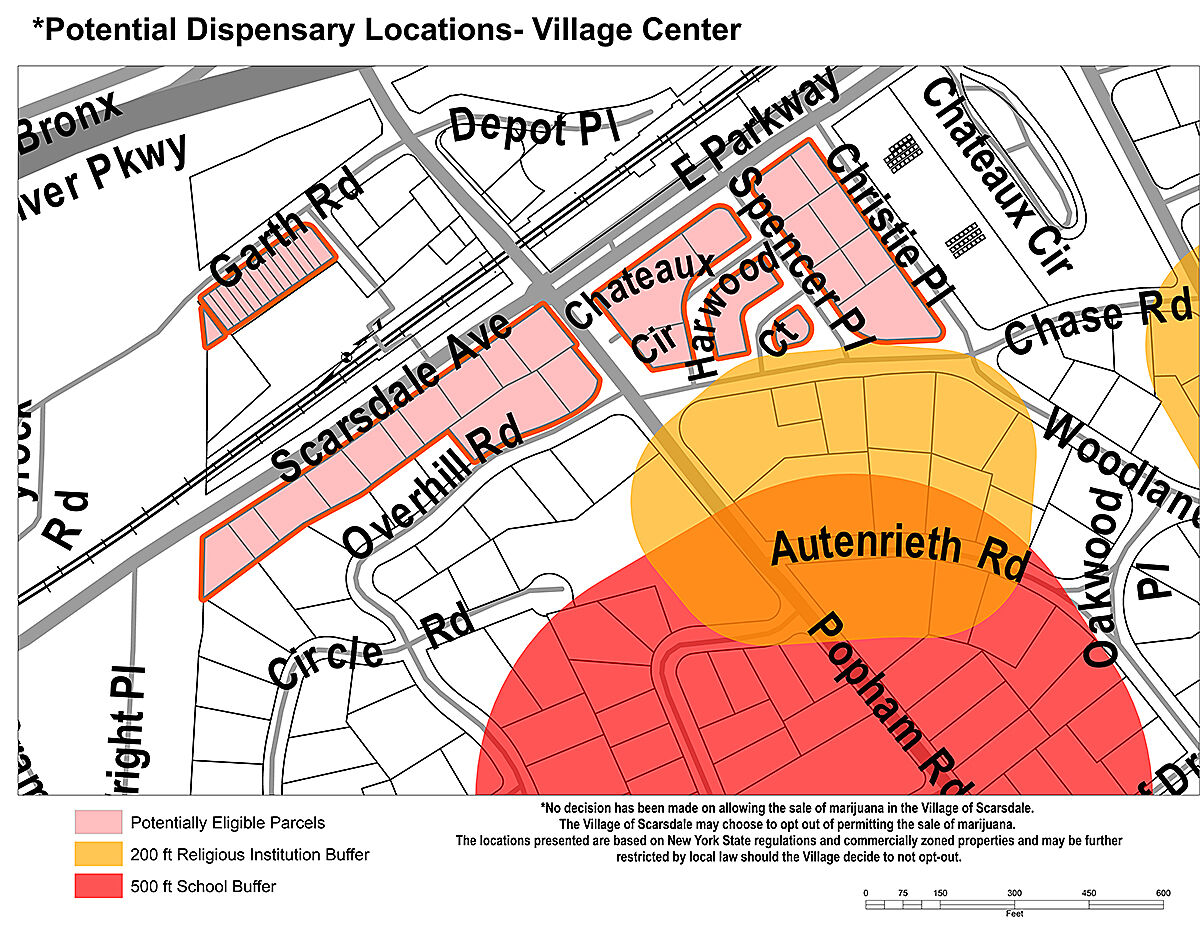 If Scarsdale chooses not to opt out and puts no further restrictions on dispensaries or consumption sites, marijuana-focused businesses could theoretically open up in the village’s downtown.

Faced with a year-end deadline to decide whether to opt out of allowing marijuana dispensaries or on-site consumption businesses in the village, Scarsdale trustees agreed at a work session June 15 to draft initial legislation that would make smoking or vaping tobacco and marijuana products on village-owned property (parks, sidewalks, etc.) illegal.

The state’s marijuana regulation and taxation act (MRTA), signed into law by Gov. Andrew Cuomo in March, legalizes the possession, use, cultivation and sale of certain amounts of cannabis products for adults 21 years or older. The legalization ends a decades-long marijuana prohibition in New York, which proponents of the law said unfairly targeted Black and brown communities.

Though the law immediately legalized the possession and use of cannabis, the retail sale of marijuana is not expected to begin until late 2022 or early 2023, according to the New York Conference of Mayors.

Though the state has largely preempted local regulations on marijuana, the Scarsdale Board of Trustees held its first meeting this week to discuss whether to opt out of retail marijuana dispensaries and on-site consumption venues within the municipality’s boundaries as allowed by law.

Municipalities that do not opt out can still pass local laws and regulations governing the time, place and manner of licensed cannabis establishments, as long as the rules don’t make the operation of those businesses unreasonable.

Though local governments must decide whether to opt out by Dec. 31, they would be allowed to opt back in at any time. Municipalities that choose not to opt out cannot change that decision after the December deadline.

Trustee Lena Crandall, who chairs the village’s law committee, which is tasked with analyzing MRTA, said that she was open to the idea of a high-end dispensary in Scarsdale, but was hesitant to allow places for on-site consumption.

“As a community we need to really think through what … the intentional and unintentional consequences of legalizing a dispensary [are],” Crandall told the Inquirer. “I think the idea of an on-site consumption lounge is moot because we simply don’t have a way to test reliably whether or not someone is under the influence when they’re driving. We are a driving community.”

Trustee Karen Brew, the vice chair of the Law Committee, said she was opposed to on-site consumption businesses, but remained open to a dispensary option.

“There are a lot of different factors that we need to consider, and my hope is that we do it with information and data and logic rather than emotion, and work through it all to get to the best decision,” she said.

While they do have Breathalyzer tests for alcohol, police departments don’t yet have a roadside test to detect whether someone is driving under the influence of marijuana.

“What we’d like to see in place hopefully by the time you have to make your decision is some type of roadside chemical test,” said Matturro to the board. He also said police chiefs and commissioners in the county were petitioning the state to provide funding for drug recognition experts. “That is a very expensive undertaking for law enforcement. Having one per department wouldn’t be sufficient,” he said.

According to the legislation, the commissioner of health is tasked with selecting higher education research institutions to conduct studies that would evaluate new methodologies and technologies for the detection of cannabis-impaired driving. When the studies are completed, the research institutions will need to issue a report to the state on or before Dec. 31, 2022.

The potential influx of tax revenue is another variable that municipalities will analyze in their decisions on whether to opt out or not.

According to the law, retail sales of cannabis will have a local excise tax rate of 4%. Counties will receive 25% of the local retail tax revenue and 75% will go to the municipality where the product was sold. If the village were to opt out, then it would also forgo any potential revenue from marijuana sales.

“Obviously, we all know we are fiscally challenged at this moment so … the heart of the matter is making sure we understand the economics of it,” said Trustee Jonathan Lewis.

Deputy Mayor Justin Arest, who opposes on-site consumption lounges, was also focused on the tax aspect of dispensaries, which he estimated could add a few hundred thousand dollars a year in revenue to the village.

“People can have it in their house, they can consume it, they can grow it, they can possess it and people can deliver it. Delivery services can come into Scarsdale. We cannot stop that,” said Arest, noting that dispensaries and on-site consumption lounges might open nearby in New Rochelle or Eastchester if those communities decide not to opt out.

“Our residents aren’t going to necessarily understand or appreciate that it’s still in their backyard and on top of that we’re not getting the revenue,” he said.

Other municipalities are also in the same boat as Scarsdale in determining what they plan to do about opting out. According to Scarsdale’s village attorney Dan Pozin, Mamaroneck, Briarcliff Manor, Dobbs Ferry, Elmsford, Tuckahoe and the city of Rye have not focused substantially on the options for retail marijuana yet. The town of Eastchester, however, held a public hearing June 15 to consider a local law to opt out.

At the June 15 hearing in Scarsdale, some residents argued that the tax money generated from marijuana sales was not an alluring prospect and that they’d rather the village just raise village taxes rather than allow dispensaries and smoking bars to set up shop.

“I would really be shocked if revenue were the guiding factor in our decision here when we’re talking about the environment and we’re talking about health. If we can’t be more creative to come up with the revenue that we need, other than by supporting this concept in the community, I would be disappointed,” said resident John Schwarz. “I would almost rather … say just raise our taxes the amount, whatever it takes. Don’t put our kids at risk; don’t put us at risk; don’t put people in a … DUI situation.”

Carol Silverman, chair of the Advisory Council on Senior Citizens, shared a similar view, and said the council agreed unanimously that the village should opt out.

“If the matter is strictly money, just raise the taxes or whatever we have to do to account for that,” said Silverman. “We don’t think that we should be encouraging it or enabling [retail marijuana] in our town.”

Bob Harrison, a 40-year resident of Scarsdale and chairman of Scarsdale Taxpayer Alert, said the watchdog group wasn’t looking to raise revenue for the village from marijuana sales and was concerned about giving teenagers an extra opportunity to pick up the drug.

“There are better ways to approach the problem of drug use,” he said.

Though the village hasn’t come to a consensus on the question of retail marijuana, trustees were supportive of having village attorney Pozin draft a resolution to further limit smoking on village-owned property. According to Village Manager Steve Pappalardo, the village currently has an administrative policy in place that prohibits smoking in village facilities and entrances, at the swimming pool complex and on any field or playground, though it isn’t prescribed in the village code.

“The village does have some authority over its property, so it’s not just parks and parking lots and playgrounds, but also the streets and the sidewalks. To the extent the sidewalks are owned by the municipalities, they can regulate their use,” said Pozin. “But recognize that that’s going to have to include banning cigarette smoke … So, it can’t just be cannabis.”

People are also not allowed to smoke marijuana on school grounds or within 100 feet of an entrance or exit of an elementary school or public library.

Retail marijuana dispensaries and on-site consumption sites also can’t be located within 500 feet of school grounds or within 200 feet of a house of worship.

According to a map presented by Village Planner Greg Cutler, if the village doesn’t opt out or add further restrictions on dispensaries or on-site consumption locations, marijuana-focused businesses, according to state law, could theoretically open on Scarsdale Avenue, Garth Road, Harwood Court, East Parkway and Spencer and Christie Place.

Susan Douglass, vice president of the Scarsdale Forum, said the group was studying the issue and plans to release a report on the opt-out issue. Personally, she said she was against on-site consumption lounges, but open to an upscale dispensary. She also asked whether landlords had a say in allowing a marijuana dispensary or on-site consumption business in their privately owned building.

Pozin said it wasn’t specified in the law, but he didn’t see the state requiring landlords to include marijuana-focused businesses if they didn’t want that sort of business in their buildings.

DJ Petta of Scarsdale Improvement Co., which owns many of the buildings in the village’s downtown, told the Inquirer the company hadn’t discussed the law yet and didn’t have a strong opinion either way about allowing dispensaries or consumption lounges.

“I think it would be more so how other merchants feel about it and how the community feels about it that would lead to our decision,” said Petta.

Marcy Berman-Goldstein, co-president of the Scarsdale Business Alliance, told the Inquirer the group didn’t have a statement on whether the village should allow cannabis dispensaries or lounges, or whether there should be a smoking ban on village-owned property.

Locally, Scarsdale’s Drug and Alcohol Task Force has voiced opposition to recreational legalization and its members have shared concerns about what the impact will be on the village’s youth, who are often targeted by cigarette, alcohol and vaping industries to use their products despite age limits imposed by law.

Wendy Gendel, chair of the task force, said the group would continue to educate students and families about the dangers of marijuana with youth.

Trustee Randy Whitestone, who serves as liaison to Scarsdale Edgemont Family Counseling Service which oversees the Drug and Alcohol Task Force, said although there was an increasing acceptance of marijuana and a “social evolution,” allowing it in the community was still an “affirmative decision.”

“Just because other villages do it and get revenue from it … doesn’t mean we have to make that same decision,” he said.

Though many community members shared a concern about the village’s youth being enticed by marijuana if the village were to allow local retailers, according to 2017 PRIDE survey data, marijuana use is already prevalent among students in the high school. In 2014, 15.4% of high school students said they had used marijuana in the past 30 days. In 2017, the numbers increased to 20.3%. The survey respondents also reported that they perceived marijuana as less dangerous than alcohol and cigarettes.

Brew said she had seen marijuana use “skyrocketing” in the high school, based on the survey results, and she said people need to consider the 21-year-old age limit for dispensaries, which could limit marijuana’s black market.

Brew also said messaging and educating students about marijuana use is essential.

“It’s here. It’s in the high school. Our kids are consuming it whether we want them to or not,” said Brew. “I think there are a lot of things to consider.”