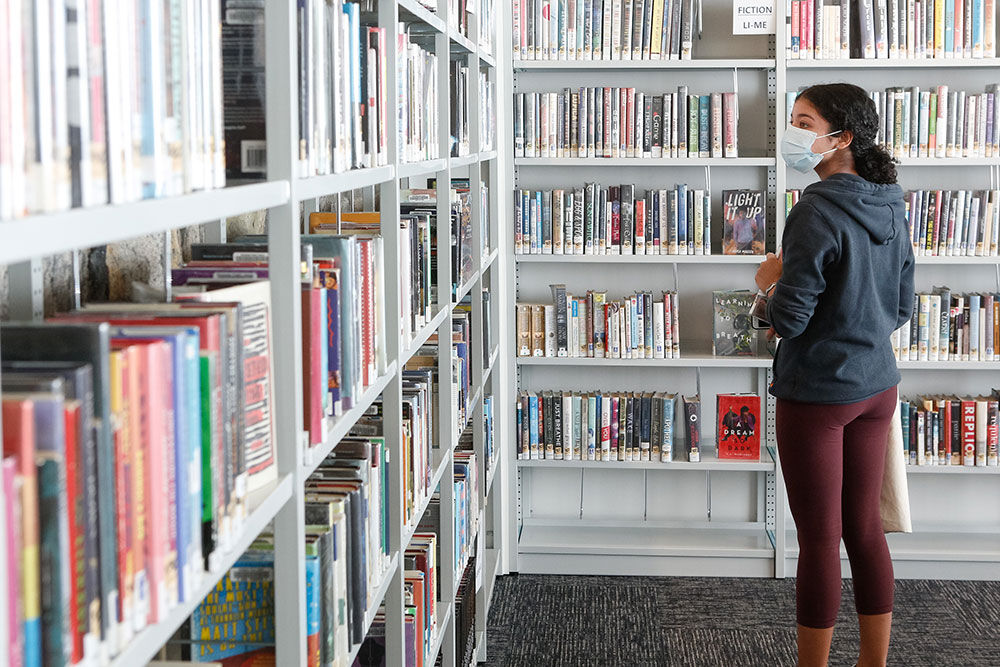 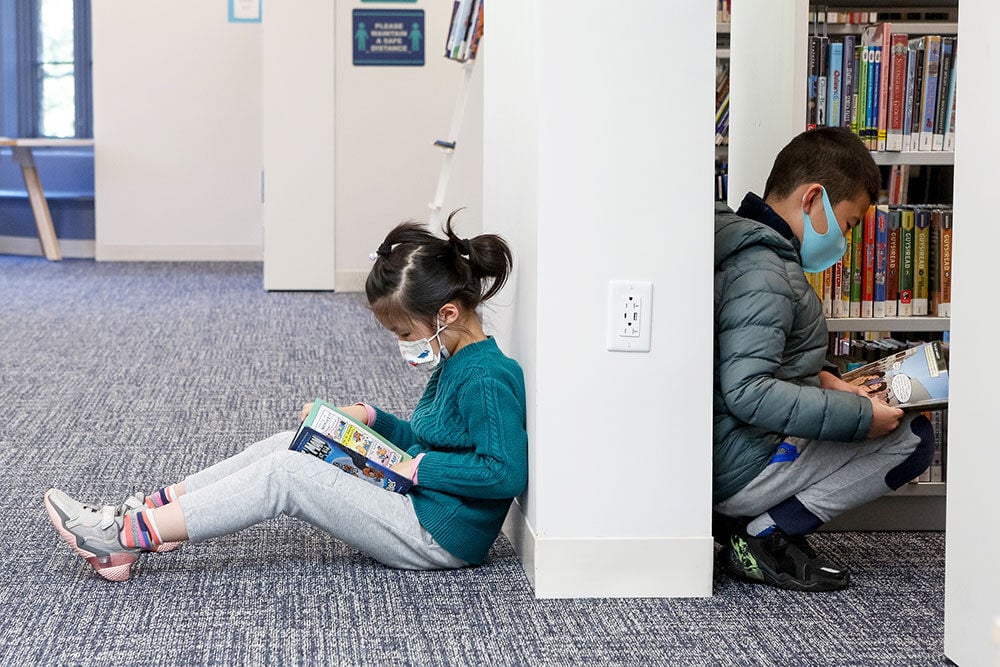 Siblings Anya and Andrew in the library’s children’s room.

Nolan Bansal has been going to the Scarsdale Public Library since he was a little kid. Years later, the library continued to be a special place for him as a senior at Scarsdale High School. He loved walking up and down the library’s aisles of books and searching for a nice, quiet place to sit and read.

But when the library building closed for a $20 million revamp and a smaller version opened in temporary space at Supply Field, Bansal started trekking to the Greenburgh or White Plains public libraries for books. Then as the library reached the final stretch of its renovation, the onset of the COVID-19 pandemic complicated the institution’s reopening plans. The library began to offer curbside pickup of books, but it wasn’t the same experience for Bansal because it required him to know which books he wanted, and it didn’t allow him to browse the stacks and search for his next literary adventure.

As COVID vaccines became available and restrictions eased, the library finally opened to the public last month, and Bansal and his grandmother made their way to the new facility on Olmsted Road. He reserved a time slot on the library’s website and was one of 10 people allowed in for a 30-minute browse.

“I really do like the renovation. It’s amazing. [There’s] a lot more open space, [it’s] a lot more modern,” Bansal said. “I’m just confused as to why 10 people specifically because there is enough room in there for two to three dozen people. Especially considering school’s going to be opening with full capacity in April … it’s specifically limiting students’ chance to go there.”

Looking for a place to study and browse for books, some Scarsdale High School students have been pushing for the library to reopen in a fuller capacity and to allow more people into the building for longer visits, especially for those — both students and adults — searching for places outside of their houses to work on assignments or projects for classes.“The library is a really important space for students,” said Vivian Guo, a senior who has been pushing for the library staff to change the capacity limitation. “It’s really hard to study effectively at home and it’s a really essential institution for a lot of high schoolers.”

A short walk from the school, the library currently doesn’t offer any options for students to use the newly renovated space for studying individually or in groups. When Guo went to the library last week for the reopening, she was impressed by all of the new amenities, especially its teen room with a television and a collection of fiction books for young adults. But with all the new space, she, like Bansal, questioned why only 10 people were allowed in the space at a time, especially this week with schools closed for Spring Break.

Guo and a friend recently emailed library director Elizabeth Bermel to plead their case, arguing that many schools, companies, restaurants and other organizations were able to operate successfully while containing the spread of the coronavirus.

“I talked to a lot of my friends and they all talked about [how] it was really difficult to focus at home when they’re studying in the same room [where] they eat and there’s all sorts of commotion going on inside their house,” said Guo on what inspired her to push for the library’s reopening. “I just remember back when things were pre-pandemic, I would always have a great time with my friends at the library trying to be productive or being a lot more productive than being at home.”

Scarsdale High School senior Natalie Dowd is one of the students looking for the library to open up and allow students to reserve study timeslots so she can work in a quiet environment. She, Guo and Bansal all said the Scarsdale High School library hasn’t been open since the pandemic forced school to close last March, which has been a tremendous loss for students who want to socialize, study or search for books.

“Right around the time when I think I would’ve started to use the [public] library as a place to study and do work was when it closed down for renovation,” said Dowd, who ended up studying at home, in the school library or in other parts of the school as a result. “I don’t think I’ve actually been in [the high school library] at all this year … But most people don’t even stay in the school for any longer than they have to, including me.”

Bermel told the Inquirer the library started with a 10-person maximum to start out cautiously and see how things progress. The library borrowed the 30-minute limit from other libraries in Westchester, she said, because many had found people didn’t want to spend an exorbitant amount of time in the library or in closed-in spaces in general. Though she has concerns about a spike in COVID cases because of spring break, Bermel said she plans on reconvening the library’s staff committee next week to consider tweaks to the library’s guidelines, possibly increasing the number of patrons allowed inside the library. She said the next phase of the library’s reopening would include opening up study spaces for patrons to use.

“We were kind of working with what had been the norm in the fall,” said Bermel. “Now, I’m sure we will increase it. We have a greater capacity [and] now we’re seeing how people are using the building … it’s baby steps.”

Another consideration, according to Bermel, is revisiting whether to open on Wednesdays, which was especially important for students as long as the high school schedule designated Wednesdays for studying and working rather than classes.

“At the time we were discussing it [the schools] were already moving to a five day a week [schedule],” said Bermel. “It was just a day that we picked and I’m sure we’ll be adding in Wednesdays.”

Because the state didn’t provide any specific guidance for libraries to reopen during the pandemic, libraries in Westchester have been coordinating their efforts and updating one another on their reopening plans.

The Greenburgh Public Library is still only offering curbside pickup and the general public is not allowed inside for browsing, computer use or studying. Because COVID-19 positivity rates were low over the summer months, the library did open for limited study and computer use with two-hour sessions, which is slated to return when the library eventually reopens.

“The library will reopen for limited browsing, limited in-library computer use and time-limited study when the rates of new infection are similar to what they were when we opened last June, when the daily rate of new infections in Westchester County was 50 or fewer cases,” said Greenburgh library director John Sexton.

At the Eastchester Public Library, director Tracy Wright said the library is currently limited to curbside pickup for books and is reviewing its reopening schedule each month.

When the library was open from June to November, one family was allowed in the library’s children’s room and five to six people in the adult section per half hour. The library closed in November after COVID cases began to rise.

Patricia Russell, a labor relations specialist at the Civil Service Employees Association (CSEA) and the union representative for the employees at the Scarsdale Public Library, said the union didn’t provide any specific mandates for the library’s reopening and that members worked collaboratively with the library’s reopening committee to make sure that union members were protected and CDC guidelines were followed.

“Some libraries have opened with different capacities than [the] Scarsdale library has. The fact that this is a brand new library has kind of changed the lens a little bit,” said Russell. “[The libraries] kind of all … followed the same [reopening plan] but it wasn’t something the CSEA stipulated.”

Bermel said the CSEA wanted to make sure the library’s reopening plan was safe for its union members and there were practically no objections from the union on the plan.

With the school year coming to a close in a few months, Bermel said she hopes the library will be able to offer study sessions before the students head out for summer break. As long as coronavirus infections decline and the county’s 14-day rolling average is below 2%, she said more library opportunities would open up.

“I think it’s going really well and we’re eager to get more people in the building and make it a little less regimented,” said Bermel. “We just want to make sure that everyone stays safe and healthy.”