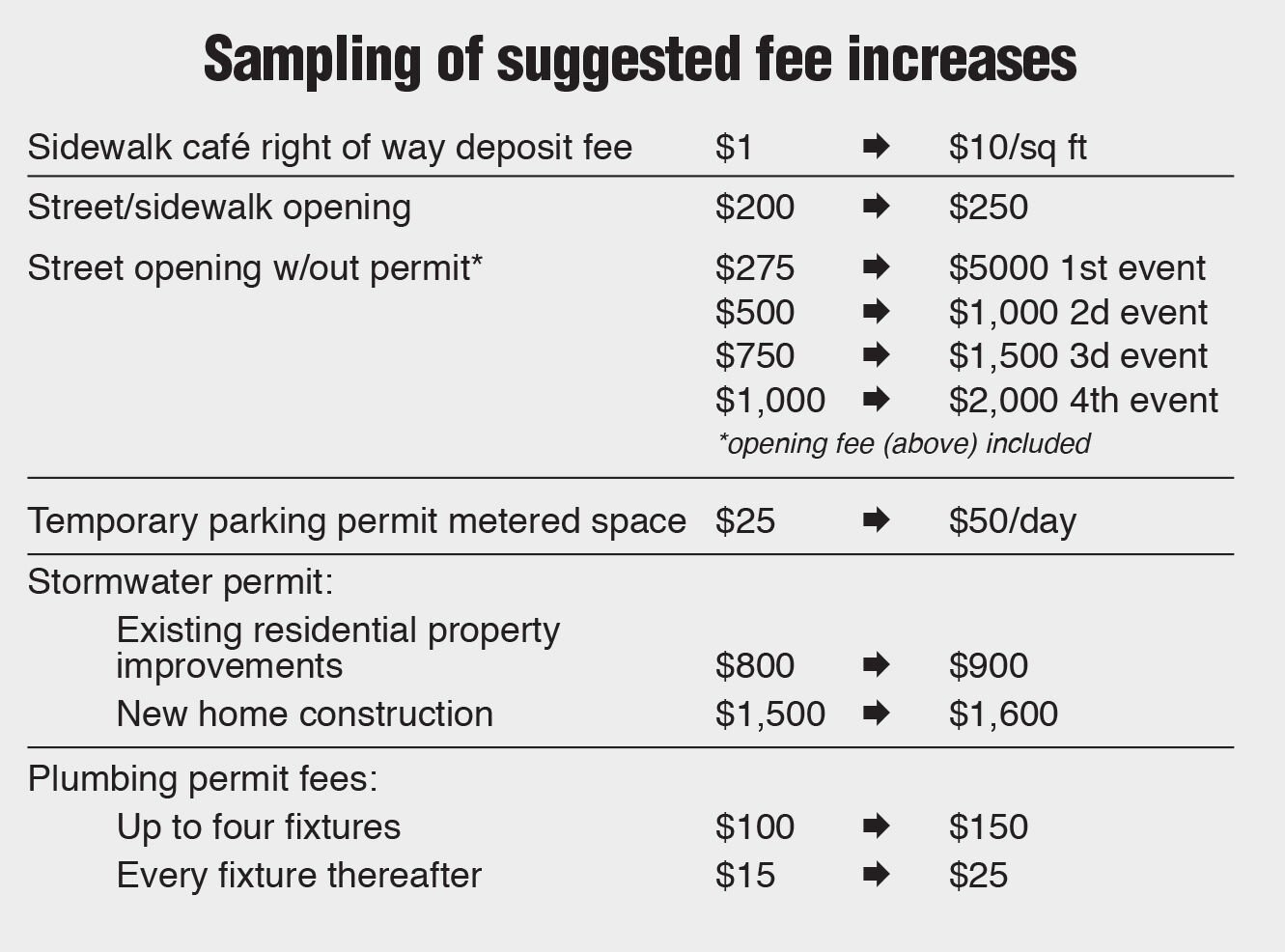 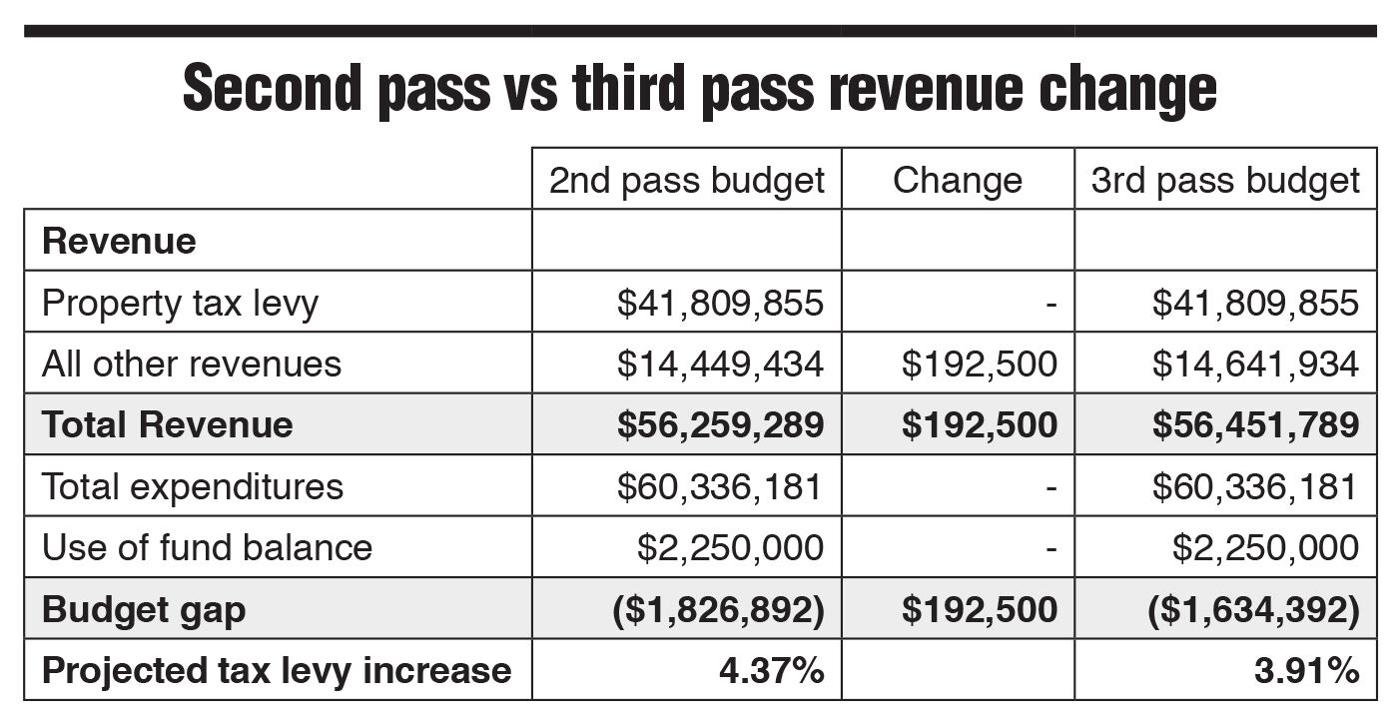 Village staff reviewed and increased estimated revenues in multiple categories in the 2021-22 budget, decreasing the proposed budget gap by $192,500 to $1.6 million.

If the village were to increase the tax levy equal to the budget gap, property taxes would increase 3.91%, an additional $216.57 increase for the average house assessment of $1.51 million.

The village has been struggling to fill the budget gap left by the COVID-19 pandemic, which has severely cut revenues in some of the village’s major generators.

According to the first pass budget released in January, parking permit revenues at Christie Place and the Freightway garages were down $617,000 from last year’s budget. Parking meter fees on the street were also set to decrease by $270,000. Usually, the village was comfortable estimating up to $1.3 million in revenue from parking permits, but with a change in commuter habits brought on by the pandemic, the third pass budget is estimating a 42% decrease in revenues to approximately $750,000.

Fewer drivers on the road and in metered parking spots has also meant fewer tickets issued, and with the courts closed for a significant amount of time, fines and forfeitures are also down by $220,000 from last year’s budget.

“The easiest way to get yourself into financial trouble is to budget revenues too aggressively,” Scaglione said. “If you put in a number there that’s higher than you really think you’re going to get, that is not what’s recommended.”

Sales tax distribution, which was increased to $3,305,000 in the third pass of the 2021-22 budget, is between the moderate and aggressive revenue estimate figures.

“[We] certainly appreciate the scenario analysis here. But I think we’re in a pretty comfortable place,” he said.

Trustee Justin Arest said he was hesitant to be bullish on the sales tax estimates.

The Christie Place, Freightway garage and open lots permit revenues are in the moderate revenue projection categories, as well as the street parking meter fees.

The projected building permit revenues are between moderate and aggressive, only $15,000 under the aggressive revenue projection. Though he felt confident in the revenue the building department was bringing in despite the pandemic, Trustee Randy Whitestone said he felt the third pass budget’s revenue estimation was too close to the aggressive side.

Village Manager Steve Pappalardo said the village was expecting an increase in building permit fees, which was reflected in the third pass budget projection.

He said he was “extremely conservative” in including any projected increases in permits, including 25% to 50% of what was estimated.

“The building and engineering fees we looked at, some of them are pretty significant nonproperty tax revenues and I wanted to be sure that if we were accurate in our estimates that the board would have an opportunity in 2022-23 and 2023-24 to go back and increase those estimates in those years without having to actually increase the fees,” he said.

Due to an increase in property sales in the village, mortgage tax revenue was also expected to increase, with a moderate scenario projection at $1.85 million.

“I think that this is a unique revenue that as the pandemic goes away, we may see this revenue go down in the future,” said Scaglione.

Though he said the village had come a long was in its analysis, Trustee Jonathan Lewis suggested the village go further and consider eliminating line items, including $25,000 for the recreation department day camp’s carnival and $46,000 for geese deterrent at the Weinberg Nature Center. He also suggested the board reconsider the village’s leaf collection program and require residents to bag leaves for collection, a potential cost savings of approximately $300,000.

Arest said he had concerns about removing the leaf collection program without public input and Trustee Lena Crandall said she disagreed in eliminating the geese deterrent program, calling it “a public health issue.”

Following his proposal for two new fees and four revised fees at the beginning of February, Assistant to the Village Manager Aylone Katzin presented an additional eight revised fee structures for the 2021-22 budget at the budget work session on Feb. 10.

The new fees are projected to generate up to an additional $149,000.

“The board had asked us to take a look at … some of the fees that had not been considered or changed at all since 2008,” said Pappalardo. “Predominantly, they wanted us to look at the building and engineering field.”

The proposed sidewalk café deposit is proposed to increase from $1 per square foot to $10 per square foot, as the previous amount didn’t cover the cost of replacing damaged sidewalks and cleanup. Deposits are returned to merchants at the end of the year.

Street/sidewalk opening permits are proposed to increase from $200 to $250 per opening. Street opening without a permit will now start at $500 for the first event and go up in $500 increments to $2,000 for the fourth event.

Temporary parking permits at metered spaces are proposed to increase from $25 to $50. Katzin said the parking permit is already in excess of feeding the meter, but that contractors who usually take out the permit would rather take the permit for the convenience of not being ticketed and to reserve the space for the day.

The filing fee for appeals to the board of architectural review is proposed to increase from $100 to $200.

Village staff will present the final draft of the preliminary budget proposal to the board of trustees Tuesday, March 9.