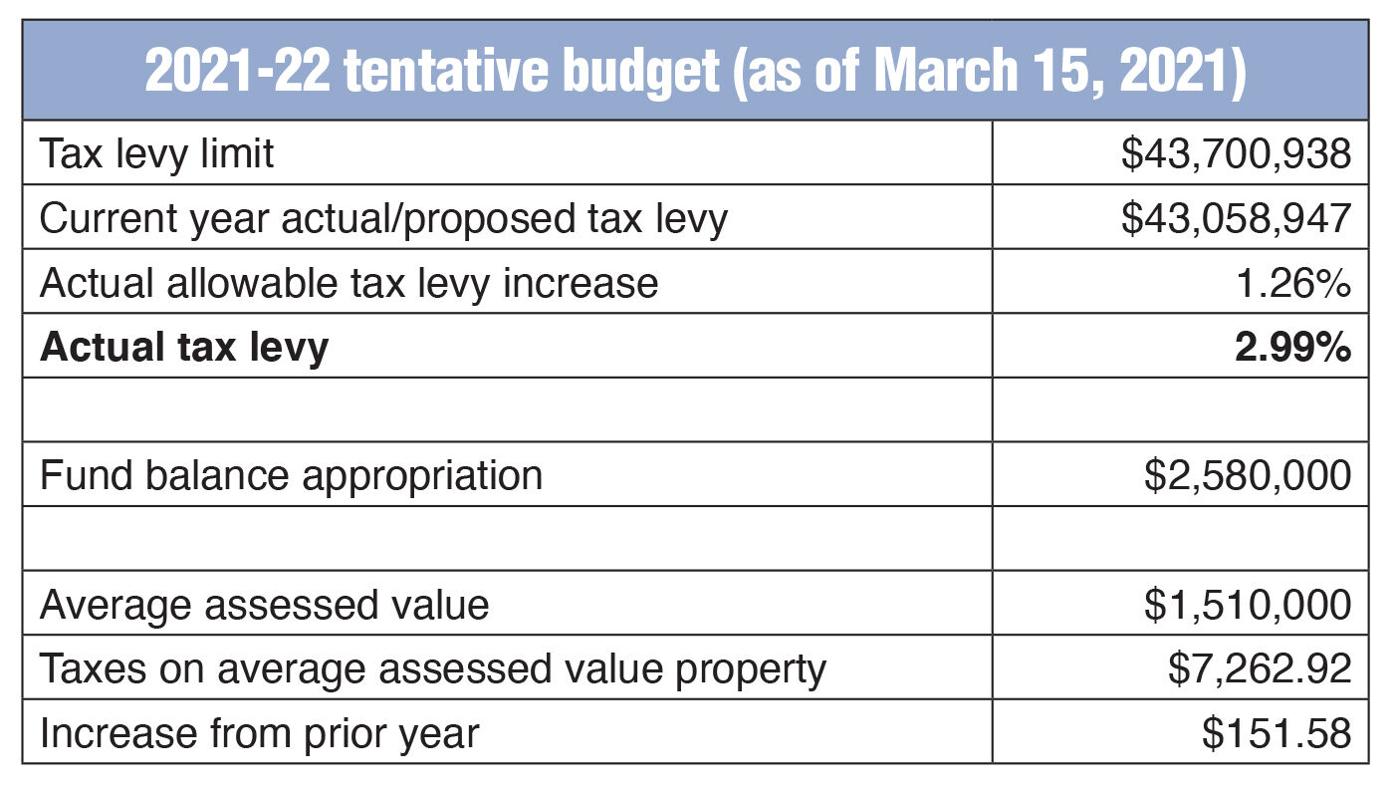 The village board of trustees agreed on March 15 to increase fund balance appropriations to $2.58 million in order to reduce the 2021-22 village budget’s tax levy to 2.99%.

The village’s newest pass, presented by village Treasurer Ann Scaglione on Monday, March 15, included some revisions to expenditures and revenues, which increased the potential tax levy impact to 3.78%.

With a consensus suggestion from Arest, the trustees agreed to split the difference between Scenarios C and D to hit a mark just below 3%.

“We are all taxpayers. We don’t want our taxes to go up any more than anybody else does,” said Samwick.

During public comment, Fox Meadow resident Bob Harrison thanked the board for agreeing to lower the tax levy increase to under 3%, but suggested the board go further in getting the levy at or under 2%.

As previously reported in the Inquirer [“Scarsdale may receive $1.96M from COVID-19 relief bill,” March 12], the passage of the $1.9 trillion COVID-19 stimulus package last week will funnel to the village up to $2 million in federal aid. The funds are restricted to covering costs for responding to COVID-19 or its negative impacts, supporting essential workers, covering revenue losses caused by the pandemic or investing in water, sewer or broadband infrastructure.

Because the funds must meet certain guidelines for spending, Scaglione recommended the federal aid be recorded in the reserved fund balance line item. That way, the aid wouldn’t have an impact on the village’s unassigned fund balance.

Last week, Samwick suggested a part of the federal funds be set aside to retroactively raise nonunion employees’ wages by 2%, since nonunion village staff didn’t receive a raise in the previous budget.

According to a memo by Scaglione, if the village were to pursue a retroactive 2% nonunion wage increase effective June 1, the tentative budget would increase by $130,000. The amount would compound in next year’s budget, which Scaglione said wouldn’t be covered by the federal aid.

Citing a suggestion made by Arest at the previous budget work session, Scaglione also pitched a one-time bonus for nonunion employees, which would make a $90,000 impact and not include any operational expenses on the current year budget.

Based on a conversation with the village human resource manager, Scaglione said the preference would be the one-time bonus. “That would help her in terms of settling other contracts,” said Scaglione.

Though most trustees ultimately supported a bonus over a 2% wage increase, they discussed the long-term effects of that decision, and whether a wage increase should even be discussed at this time.

Ross, who’s finishing his second and final term on the board, said the village needed to focus on the message this decision will send to the nonunion employees — if the board decided to move in favor of a bonus rather than a 2% wage increase, then employees may feel like the board was taking something away from them, Ross said.

Lewis agreed that messaging was important and that a one-time bonus made sense.

Crandall said she was originally going to argue for a 2% salary increase but decided she could support a one-time bonus, though she also shared Ross’ concerns about messaging.

Arest said he was uncomfortable with the wage and bonus conversation and more analysis and work needed to be done.

“My preference at this point is to go with the bonus route for various reasons … [but] I don’t even know if I want to commit to a dollar amount,” said Arest, who also questioned the board as to why they were deciding to have a conversation about the wage increase now that it was evident the tax levy wouldn’t be affected by the change.

Crandall said she disagreed with Arest on the time frame, since the current board’s last meeting would take place March 23 and a search for a new village manager was already underway.

“If we go with the one-time bonus, this topic can be revisited once we have a new village manager. We can then get into the weeds and really develop the type of compensation system that we feel is appropriate for our professional staff,” said Crandall. “I’m afraid that if we try to work it out within the next couple of weeks or so, … we’re going to shortchange the entire process.”

Waldman agreed with Crandall and Whitestone said he supported the bonus, while also sharing Ross’ concern about the message it sends to village staff.

Arest said the idea of time running out was “a self-created crisis” and that since the board wasn’t planning to use any money from the tentative budget, he was concerned about the timing.

“We’re already using two and a quarter million dollars of fund balance this year. We usually appropriate a million dollars and we usually don’t even use it because we have surplus funds that offset that and allow us to pay for our capital,” said Arest. “We’re not doing any of that. We’re underfunding our capital, we don’t have a crazy amount of fund balances; our finances are not great.”

During public comment, Black Birch Lane resident Robert Berg said a retroactive pay raise for employees sent a bad message to taxpayers since there were more pressing needs for the $130,000.

“We all appreciate nonunion staff’s work during the pandemic — they did a wonderful job — but you’re ignoring the fact that many of our residents suffered greatly during the greatest financial crash of our lifetimes. Many lost their jobs, their businesses suffered greatly and their property taxes rose during that time,” he said. “Our nonunion staff never lost a paycheck or their health benefits or any of their other benefits. They didn’t lose any sleep over the prospect of losing their jobs. To me [it’s] a tremendous benefit that they had that.”

Responding to Berg’s comments, Village Manager Steve Pappalardo said the village’s nonunion employees “did not miss a beat” during the pandemic and continued working under “life threatening situations.”

“Whether or not the board wants to recognize the nonunion staff with a bonus or an increase is a different story,” he said. “But to say that it’s a poor use of money, I take exception to [that].”

The village must file the tentative budget with the village clerk by March 19. It will be forwarded to the board of trustees by March 23 for a public hearing scheduled April 13.