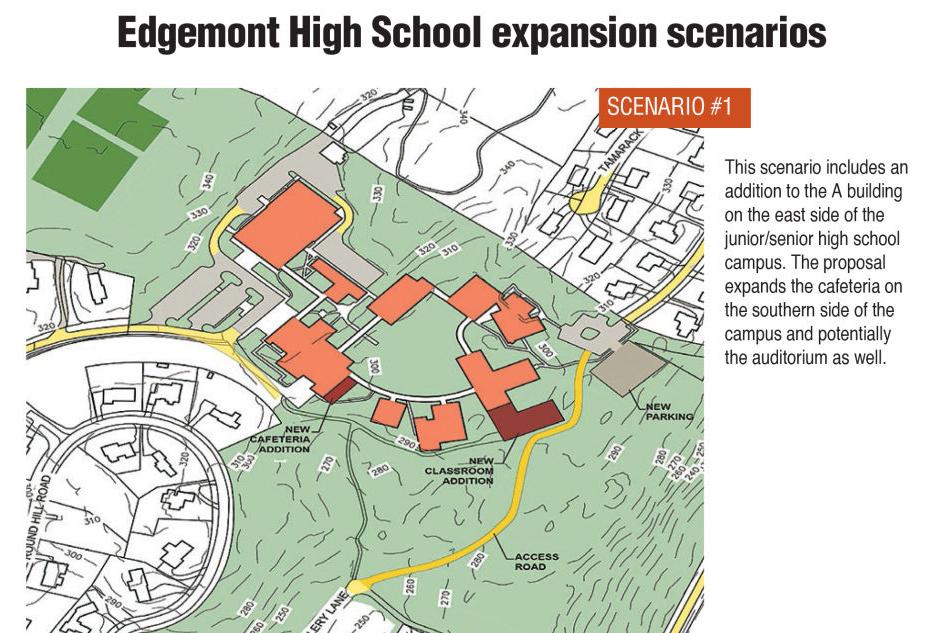 School district officials presented a five-year capital facilities plan Jan. 14, which included an architectural firm’s three potential scenarios for additions, renovations and expansion of the school district’s infrastructure. To meet the need for expansion, the board is considering a potential bond vote in the fall.

Two years ago, the Edgemont School Board formed an advisory committee to make suggestions regarding construction, renovation or expansion of the school buildings and grounds in order to accommodate Edgemont’s increasing enrollment.

At a school board meeting in September, board members unanimously approved a contract for architectural and engineering services of Elmsford-based Fuller & D’Angelo to update a room utilization study and to determine the district’s spatial needs.

“The focus for the past 10 years has been to preserve our assets and now we need to expand our assets,” said Superintendent Victoria Kniewel. “Our educational needs have evolved over the years and we continually repurposed spaces to maximize areas for students. We’ve taken many small steps to address a big problem over time. Two years ago, we hit the realization that the small steps are not enough, we need a big step.”

“We started the process over two years ago, initially looking at utilization within the existing spaces and potential to gain programmatic space within the existing classroom spaces,” said John D’Angelo, the principal architect at Fuller & D’Angelo. “As [we were] going through meetings with administrators, trying to develop the plans, it was clear right away that over the years the district has really made great efforts in utilizing every square footage of space in … all buildings.”

At the elementary schools, offices and book storage spaces were converted into learning spaces and movable dividers were installed to create shared spaces.

The district’s five-year plan was organized into five project categories, which included space and infrastructure; life, safety and security; site access and parking; climate controlled space; and communal space. It also included individualized projects within each category, and multiple potential projects were included under each category.

Over the last five years, the school district has cumulatively invested approximately $13.8 million in capital improvements.

“When we look at space and infrastructure, I think the paramount concern and the biggest issue for the school district right now is the lack of space,” said John McCabe, the district’s director of facilities.

Proposals in the life, safety and security category include installing new fire alarms at the elementary schools and putting in new classroom doors, locking hardware, a networked PA system, class bells, clock systems and a fully integrated building access and surveillance system for all buildings in the district.

Proposals in the site access and parking category would improve school parking, repaving lots and create air-conditioned spaces across the district.

The potential projects under the communal space category include an auditorium and cafeteria expansion in the junior/senior high school and a school lunch upgrade at the elementary schools.

Fuller & D’Angelo created three scenarios to meet the limited space needs of the district, as well as to expand the cafeteria and improve campus parking.

“The constraints within the existing auditorium are tight,” said D’Angelo. “Any expansion of that auditorium would be limited and would be a tough construction problem to deal with.”

Scenario 1 also includes an addition to the Greenville Elementary School on the east side of the building. D’Angelo said the addition could be either a single- or double-sided corridor. D’Angelo said the firm would look to maintain the existing playground space at the school and also look for ways to create secondary road access to the building. The cafeteria at the school was “the other critical area” at the school, D’Angelo added, but it has limited potential for additions due to utilities restrictions.

Scenario 1 also includes a new addition at Seely Place on the south portion of the building. D’Angelo said the addition could be two to three stories high and go above or beside the single kindergarten classroom in the building.

Scenario 2 includes the same or similar additions to the elementary schools, but instead includes a separate building attached to the A building at the junior/senior high school, as well as a cafeteria and possible auditorium expansion. D’Angelo said better locations could exist for the new building.

“It is a much, much bigger development of the property at the lower campus behind the A and B buildings,” said D’Angelo. “Depending on the use of the new building on this campus, it would obviously affect the need for space in the elementary schools.”

After a potential bond vote in the fall, the architect plans to finalize the building plans for the project next year. In 2022, the plans will be submitted to the State Education Department for approval, with the hope that approvals will be in place for bids by November. With the district’s old debt rolling off in the 2022-23 school year, new bond funds would become available for construction to begin. D’Angelo said it’s possible the construction projects would be completed by September 2024.

School board president Alec Clarke said the district will be working to create a website for the bond project.

“We didn’t want to make a rush decision nor do we want to rush this forward,” said Kniewel. “We are in the discovery [and] planning stage.”