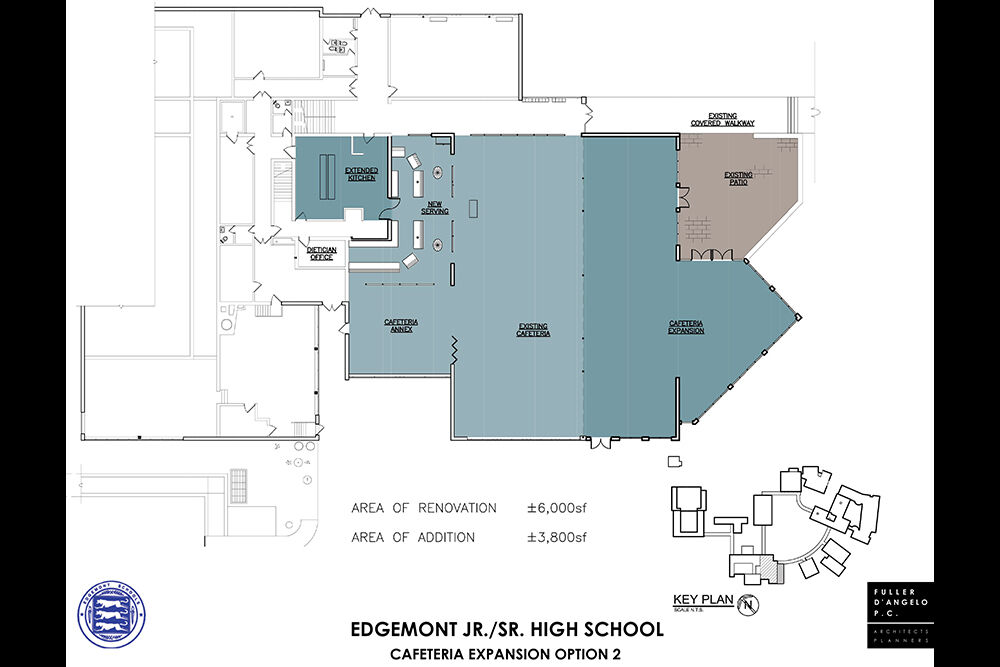 At EHS, a two-lane accessway would connect Artillery Lane and Old Colony Road with additional parking and a roundabout. An emergency vehicle access path would connect the new Artillery/Old Colony entrance with the main parking lot on White Oak Lane. 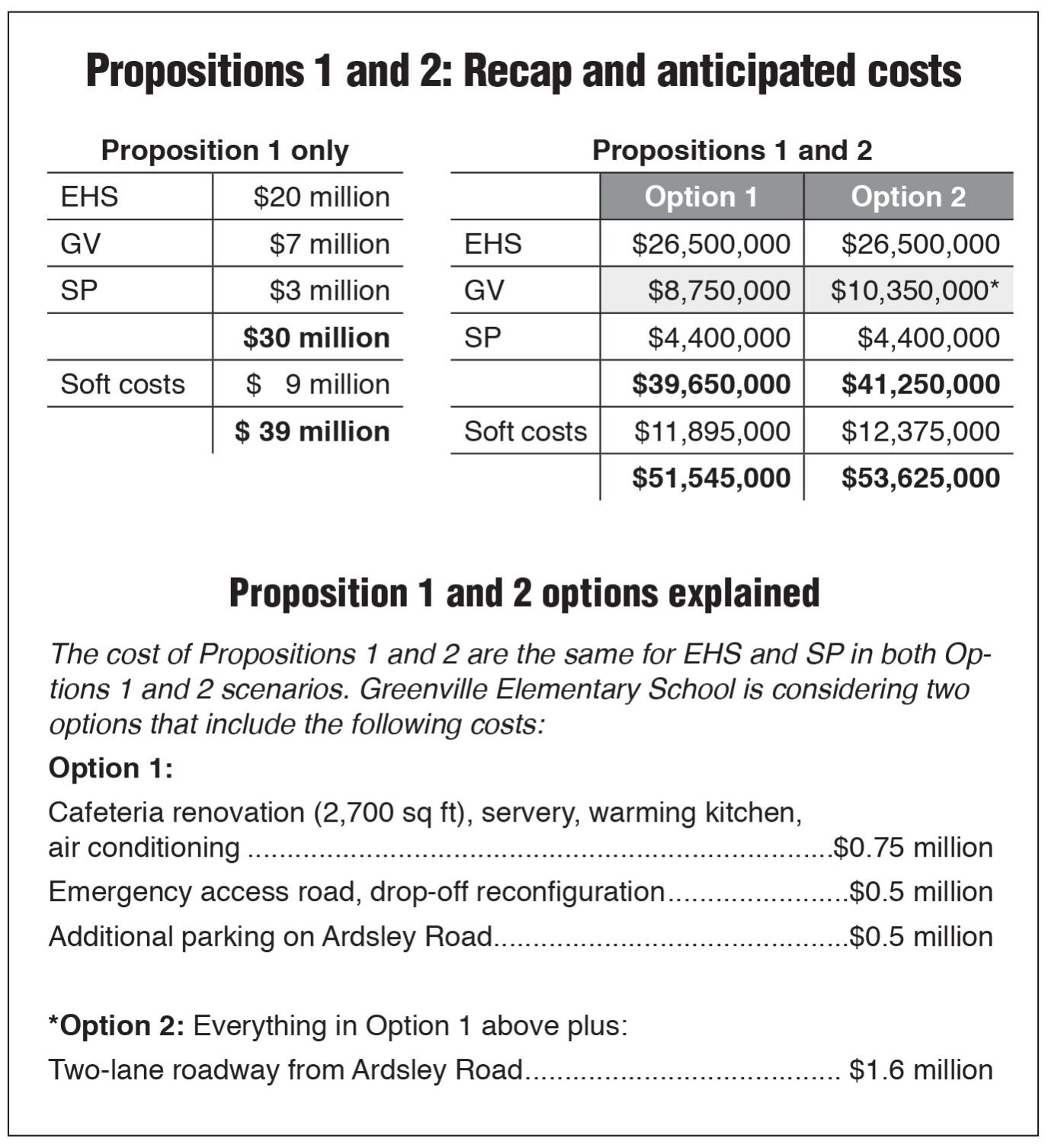 The plan presented during the board of education meeting on January 12 was the second in an ambitious, two-part bond proposition being readied for board approval Feb. 23.

At EHS: Citing a lack of space to eat lunch, a congested serving area, and long wait lines that deplete students’ break times, Assistant to the Superintendent for Administration Bryan Paul and John D’Angelo of the Elmsford-based architectural firm Fuller & D’Angelo described the addition of 3,800 square feet and a total renovation of 6,000 square feet to the EHS cafeteria, which would redesign the server area and repurpose the EHS cafeteria annex.

Paul said the cafeteria renovations at EHS would increase flexibility in master scheduling, leading to fewer conflicts that impact student course requests, while providing a significant increase in the square footage that can be used as multipurpose space.

At Greenville School: At Greenville School, D’Angelo described leveling out the current two-tier lunchroom and converting the space where lunches prepared off-site could be stored, warmed and served, although full kitchens are not part of the plan.

“The goal here is to provide enough equipment and enough prep area so that we can provide a catered lunch option, bringing in food from the outside,” said D’Angelo.

At Seely Place: Seely Place would build similar provisions for food warming, preparation and serving by renovating and repurposing some of the existing space near the cafeteria, such as a janitor’s closet.

Both schools would work “with the existing envelope of the building,” said D’Angelo, and air conditioning would be installed at all three campuses.

At the elementary schools, the upgrade in food service would benefit those not wanting or able to bring lunch from home.

With the goal of remedying parking shortages, limited emergency access and traffic backups that both delay student drop-offs and pickups and spill into surrounding neighborhoods, the district has proposed the following exterior sitework:

At EHS, an additional two-lane accessway to the EHS campus, connecting Artillery Lane and Old Colony Road with additional parking and a roundabout for drop-off and pickup, and a dedicated emergency vehicle access path connecting the newly constructed Artillery/Old Colony entrance with the main parking lot on White Oak Lane.

At Seely Place, the plan would create an emergency access road leading to the back of the building. The back parking lot would be redesigned to create a drop-off/pickup location accessible via Henry Street, and an additional parking lot off Ardsley Road would be installed with a lighted walkway to the main parking lot.

At EHS, the anticipated cost of a 3,800 square foot cafeteria expansion would be $3 million, a cafeteria and server renovation and air conditioning $1.7 million, and the proposed access road, emergency path and parking, $1.8 million, totaling $6.5 million.

At Seely Place, the anticipated cost of reconfiguring 2,000 square feet for cafeteria renovation, a servery and warming kitchen is $300,000; the emergency access road and drop-off reconfiguration off Henry Street would be $600,000, and additional parking on Ardsley Road is estimated at $500,000, totaling $1.4 million.

D’Angelo said overall the district is looking at two to two and one-half years of construction, beginning this summer.

Paul said he expects the state will subsidize a large portion of the project in the form of expense-based aid.

“Historically, we have received more than 30% in aid. The rate varies from year to year, and is based on the components of the project — some receive aid, others do not — but in any form, it represents a considerable offset to the required tax-based funding source,” said Paul.

The bond vote is structured into two propositions, with the second contingent upon the passing of the first.

Soft cost totals, which can add up to more than $12 million if both propositions are approved, are based on all costs in the projects that do not include the physical work. They include architectural, engineering, financing, and legal fees, and other pre- and post-construction expenses.

Should Proposition 1 pass, the annual tax increase for a single-family home in the Edgemont community, valued around $1 million, is estimated to be between $75 and $450. If the bond for Propositions 1 and 2 are both passed during the May 18 vote, the annual tax increase is estimated to be $400 to $750. The property tax implications of the bond will be addressed in greater detail at the next school board meeting on Jan. 26.

Paul and board president Alec Clarke at the meeting recommended the community vote Yes on Propositions 1 and 2, because constructions and other costs will inevitably go up if projects in Proposition 2 are delayed.

Said Paul, “The fact that we’re separating these into two separate propositions in no way means that Prop 2 isn’t something we need as a community.”