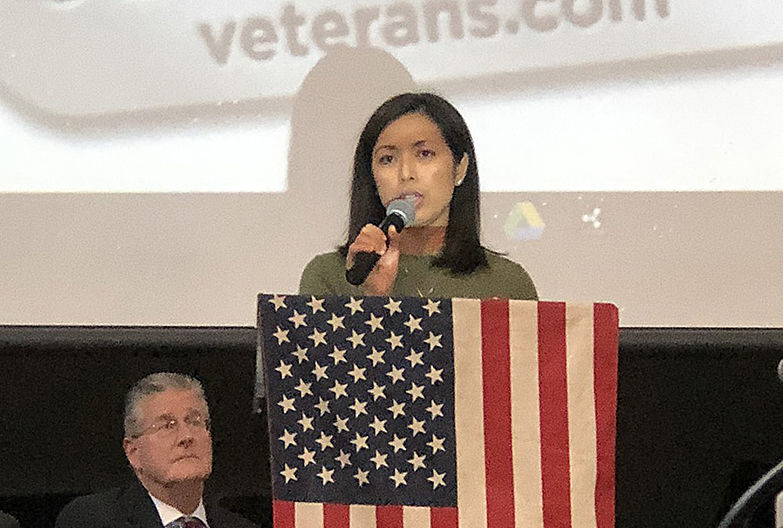 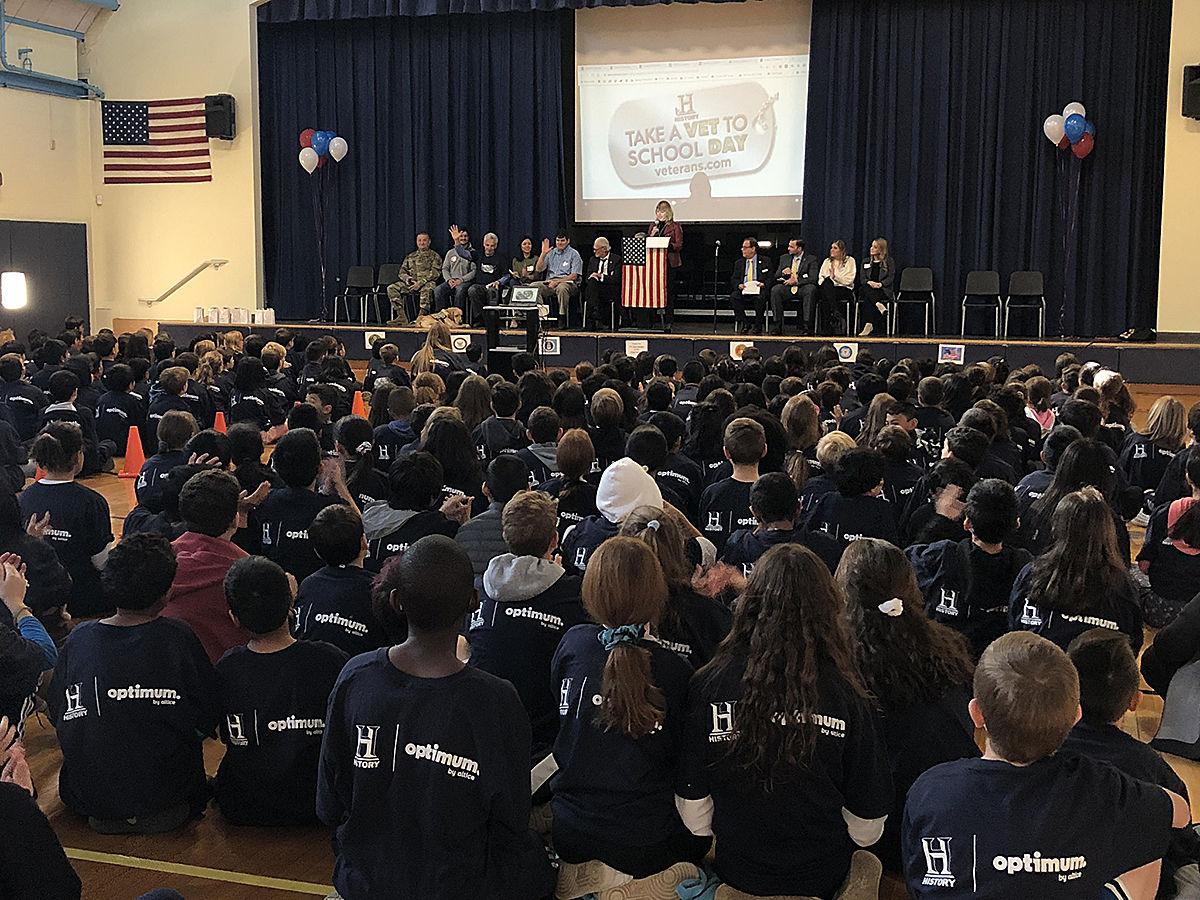 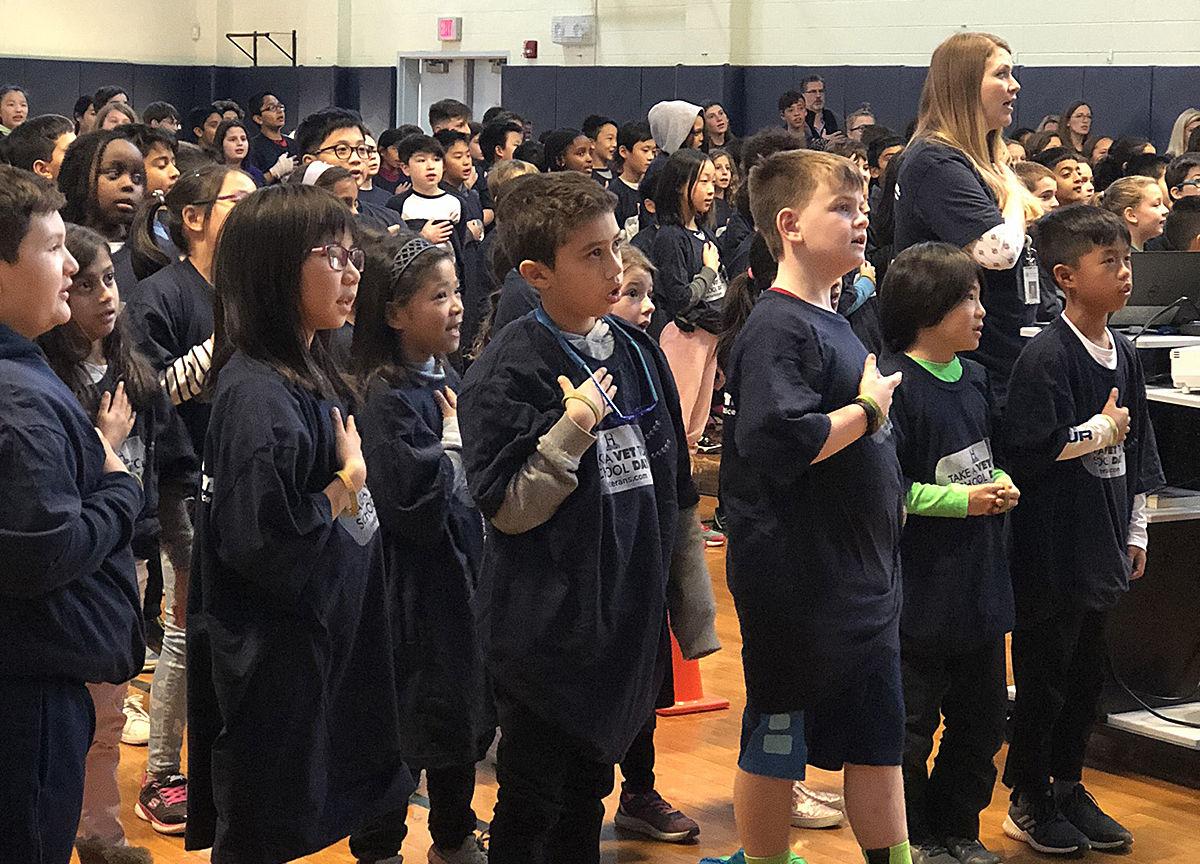 Students during the National Anthem. 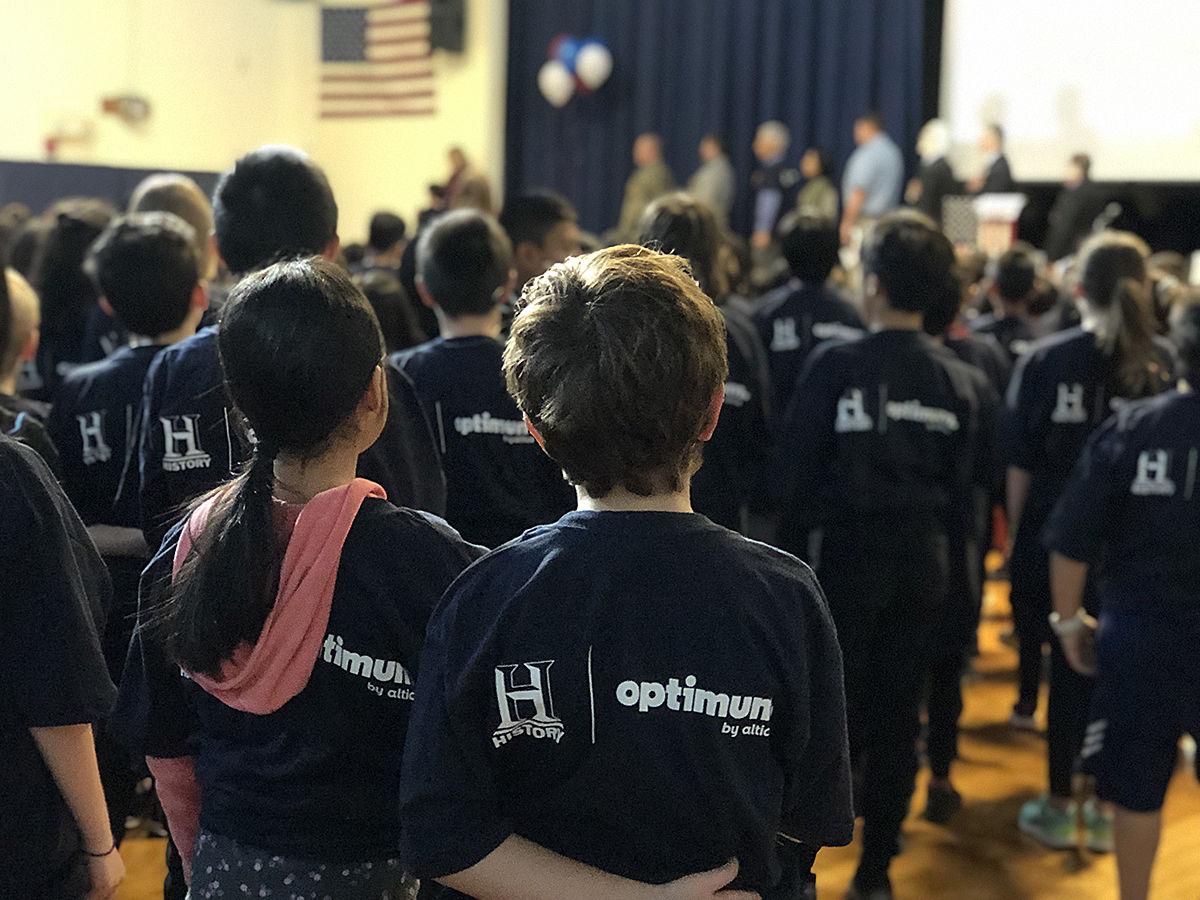 The Pledge of Allegiance. 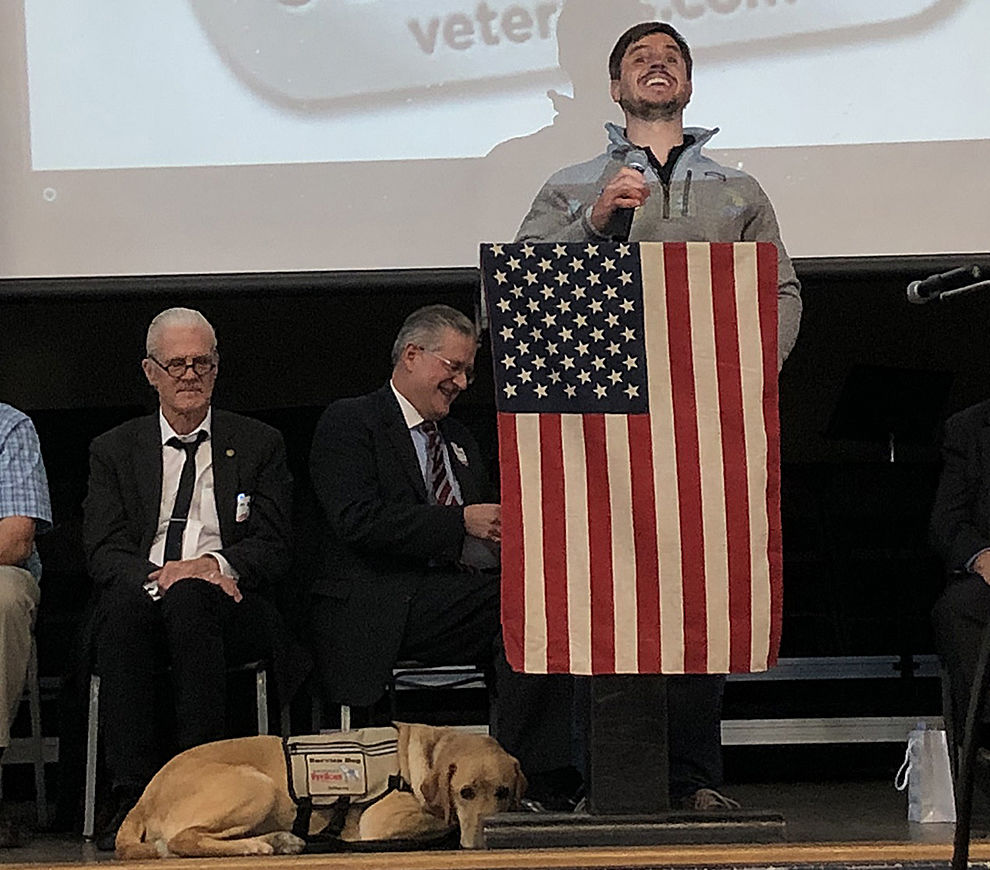 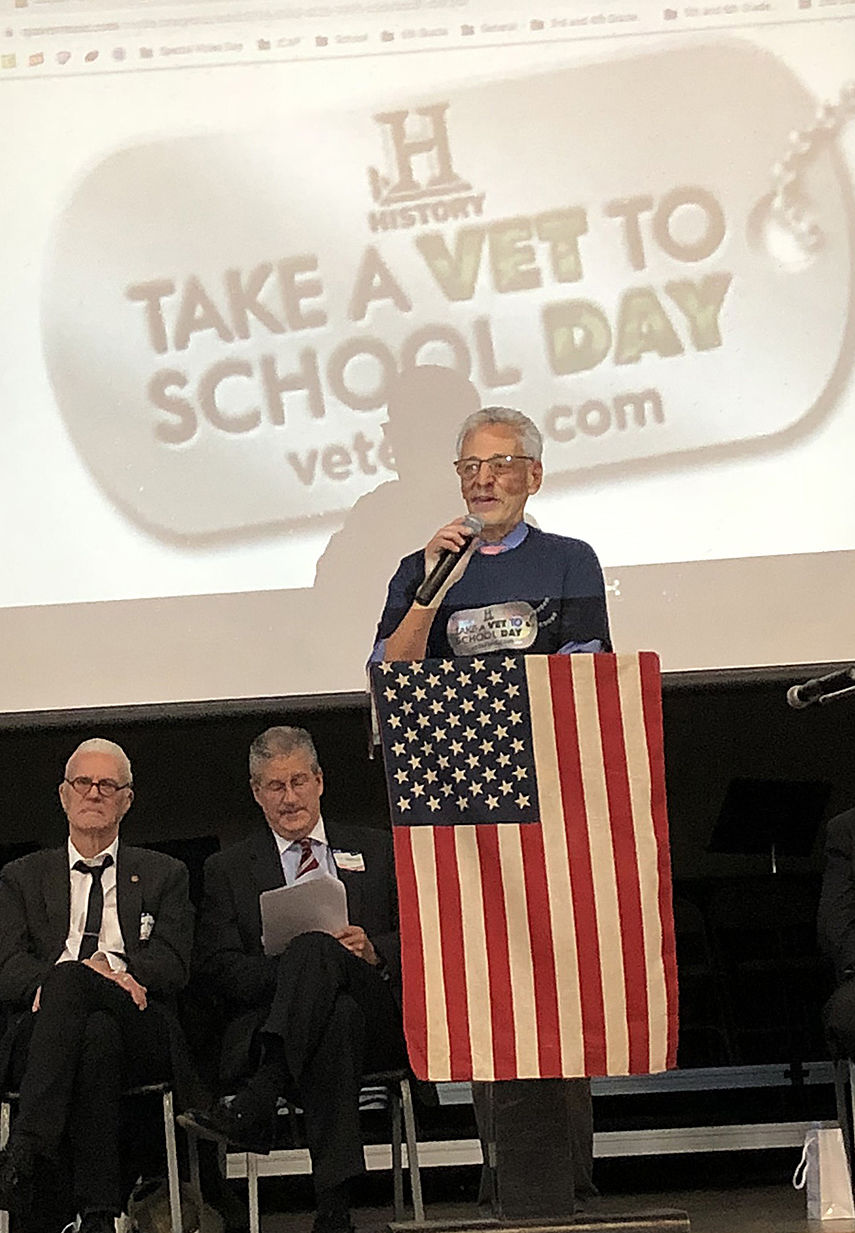 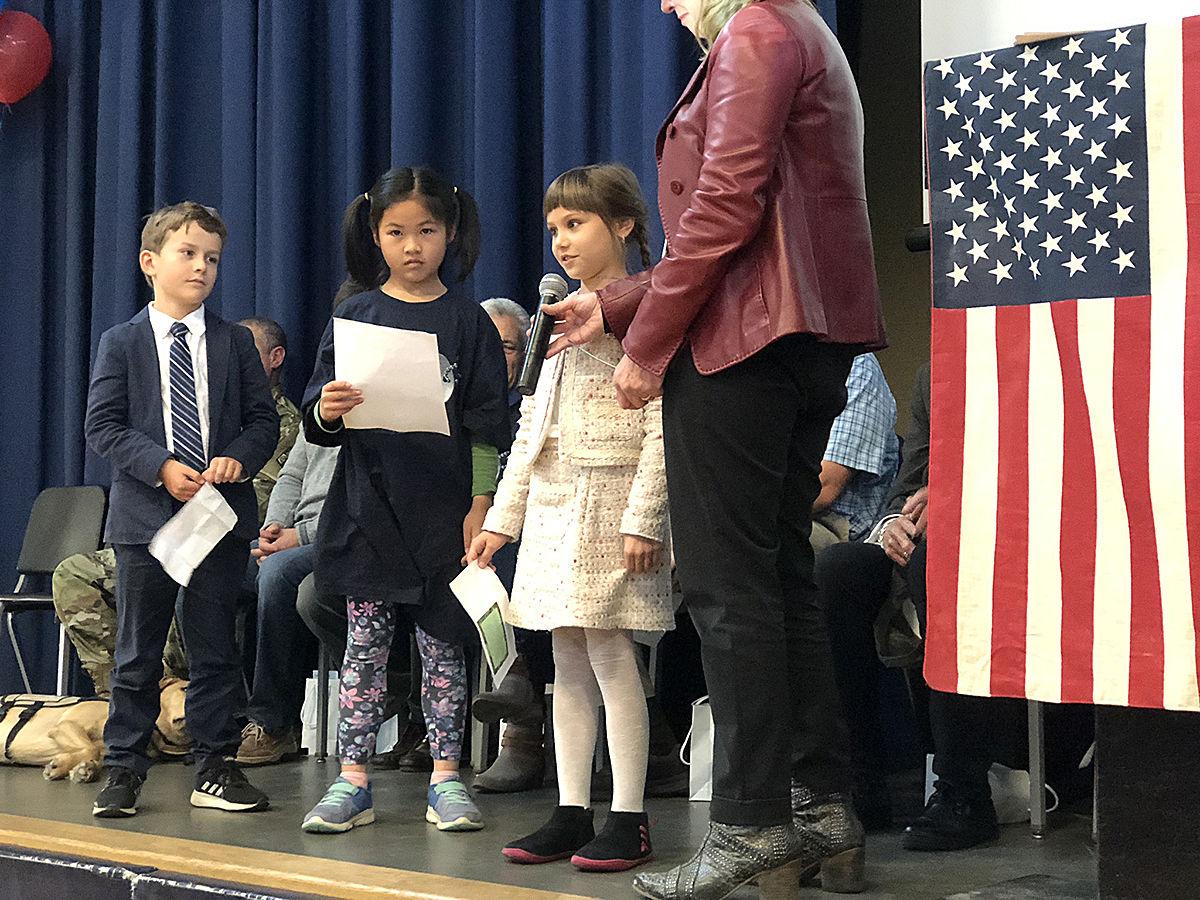 Students read poems at the event. 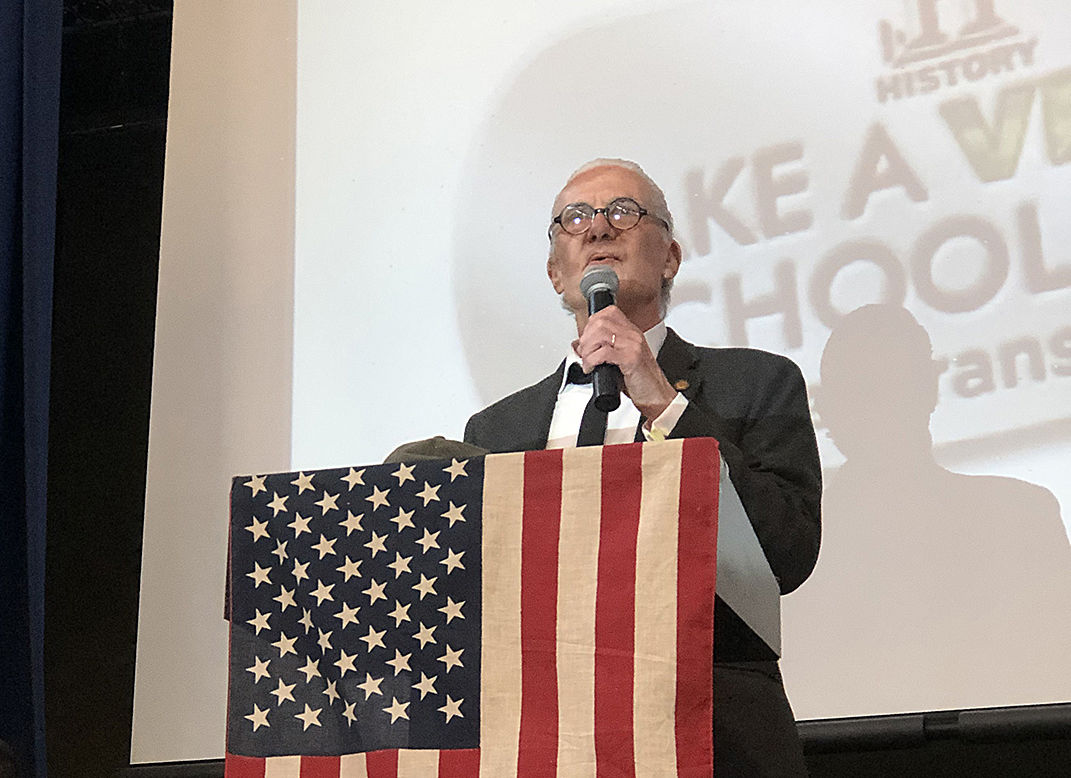 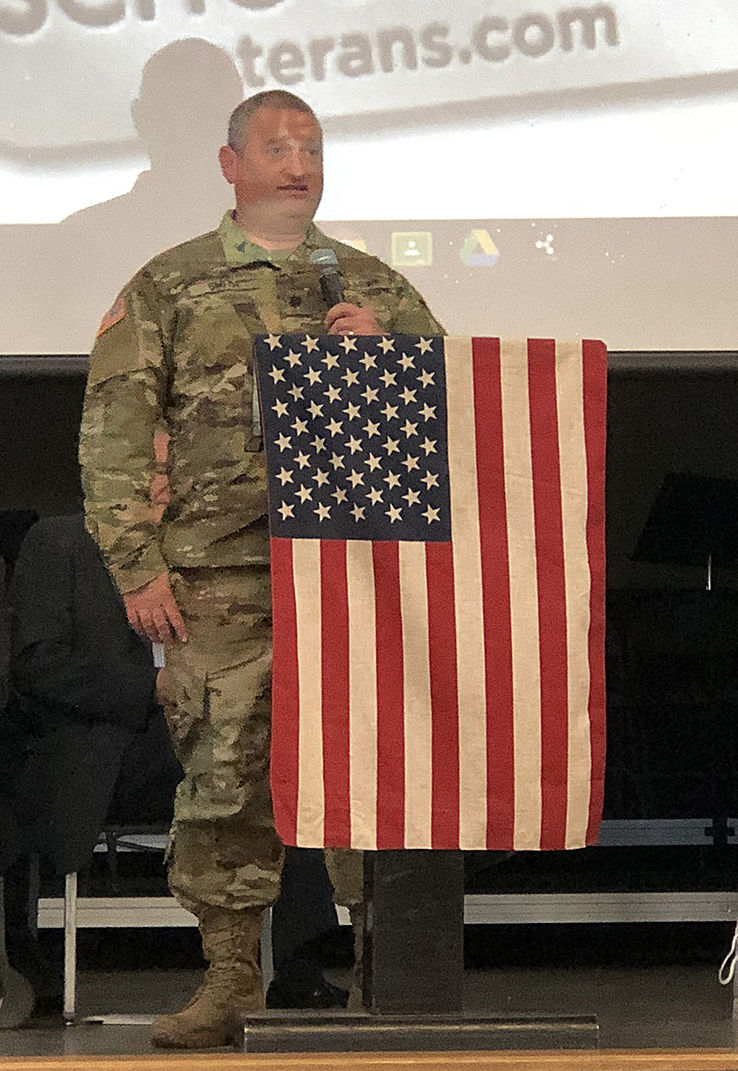 Students at two Edgemont schools celebrated Veterans Day with a special assembly Friday, Nov. 8 to give thanks to local veterans and learn more about their experiences in the U.S. military.

Seely Place and Greenville elementary schools welcomed guest veterans from all walks of life and service in a program arranged with the help of the History Channel. For an afternoon assembly at Greenville School, a sea of kids. decked out in navy blue History Channel shirts emblazoned with “Bring a Vet to School Day,” filtered into the gymnasium and listened to a brief speech by New York State Assemblyman Thomas J. Abinanti who reminded the students that “freedom is not free.”

“It’s clear to see that when you see the veterans. The everyday people like you and me who had everyday lives, went to school, had jobs,” said Abinanti. “They are people who when asked to put on uniforms and go places outside of their normal lives, they said yes.”

Abinanti went on to recognize the veterans for going anywhere in the world American soldiers were needed, and thanking service members for “paying for” American freedom.

Tom Mooney of the 101st Assault Airborne Division addressed the crowd, joking that he was old enough to be a World War II veteran as opposed to Vietnam, where he served from 1967 to 1968. A longtime Edgemont resident, 72-year-old Mooney’s children graduated from Edgemont schools, where he said his son learned the discipline to later succeed in the service as well. After receiving combat medals for his service, he returned to New York City to pursue a career in TV and film.

Looking out at the audience of young faces, Mooney choked up as he finished his address, saying the reason people serve is to make sure the future generations of America, like this one, have the same freedoms past ones have.

Sean Fedeli took the podium next. A graduate of Yale through an ROTC scholarship, Fedeli said he knew the colleges he planned to go to were too expensive for his family to afford. He joined the army, which paid his four-year tuition as long as he committed to serving four years after his education and receiving regular training while in school. He worked with aircraft artillery, though he now teaches social studies at an NYC school and has a son at Greenville School. He began his career as a second lieutenant in the Air Defense Artillery branch in 1995 and went on to serve in South Korea and Germany.

“One of the biggest jobs of the U.S. military is to use its influence to prevent war,” Fedeli explained to the audience.

Following Fedeli’s commentary, the next speaker said she was motivated to join the service by a desire for a good education. Michelle Khan served from 1998 to 2002 as a cryptologic technician and was a petty officer second class at the time of her discharge. An Edgemont resident, her children now attend Greenville. She enlisted in the Navy at 19 because she wanted to go to college, but was one of multiple children and didn’t have the funds to make it happen. While in the Navy, Khan wrote reports for government agencies to ensure the safety of troops in combat in high risk areas, at one point ensuring force protection of more than 3,000 troops.

“Veterans come from all walks of life,” said Khan. “I’m a first generation American, my father enlisted in the U.S. Navy from the Philippines. As a child, you see the sacrifice kids and families make with one parent being often gone or in harm’s way. Many times, other military families in your community become your support.”

The audience erupted in applause as Pete Khouri, or “Mr. Khouri” as he was called, was introduced. Graciously smiling through the cheers, Khouri, who teaches sixth grade at Greenville and whose own children attend Edgemont, talked about choosing to serve in Vietnam. Though he was not drafted, he felt he could make a difference. He spent 26 years in the Army Reserves as a lieutenant colonel and later his youngest child followed his footsteps by joining the service.

“I think when you’re a veteran, you think ‘My efforts can make a difference for this country’, and that’s why I joined,” said Khouri.

The next presenter, Troy Smith, the only one on stage dressed in full fatigues, had served as a military judge. He said joining the military was his best professional decision, saying he got to do what he loved while serving his country. He served as a lawyer before being promoted through the ranks to serve as a judge, where he heard cases to determine the guilt or innocence of members of the military regarding war crimes and other crimes.

“There are so many different occupations in the military, you can be a lawyer, a nurse, a doctor, a tank driver, a teacher, anything. I hope a number of you will consider this career path, it’s been an incredible time for me,” said Smith.

Major Chad Althiser was the last to approach the podium, bringing along with him one of the stars of the show: his service dog Mikey. Althiser joined the Marines in 1994 at age 18 and spent two years as an aircrewman while completing college. He has been deployed to Iraq, Japan and Afghanistan, and went through several rounds of leadership training before reaching the rank of major.

He noted that veterans have been around since the beginning of time and that some, like Vietnam vets, weren’t treated with as much thanks as they should have been after returning from war. He told the students that while he served in Afghanistan, he saw a lot of people who lacked opportunity and freedom — things he hoped to preserve for the people back home.

Althiser went on to say he believed the students will put forth a level of responsibility with their freedom and opportunity, and that some will serve in the future and some won’t, but he is happy that they have that choice. He told the students they have a responsibility to go forth and put the most into whatever they’re doing, no matter how important or unimportant they think it might be.

“I had a friend who was burned badly and he could have died very easily of infection,” said Althiser. “After months in the hospital, his doctor came in and brought in the janitor and started talking to my friend. The doctor asked my friend who he thought had been most responsible for saving his life and he said it was the doctor. The doctor said that it was actually the janitor cleaning his room and saving him from infection. Although the doctor’s role was important, the janitor’s was more so. Please remember that.”

Althiser then gestured toward the calm Golden Lab perched beside him in a red service jacket. He explained to the students that while in combat, he saw and did things that were not pleasant, and didn’t do things he wished he had, and he came home feeling very sad for a very long time. That’s when he was given Mikey.

“For almost three years now he’s been my best friend,” said Althiser “He helps me and hopefully I help him just by loving him. And you all help me by being proud.”

As the service concluded, a few students took the stage to read some poems dedicated to thanking veterans, and then all in attendance stood to sing the vets on stage a song of thanks. The group stood smiling, taking in the sea of singing kids before them. Except for Mikey, of course. He just took a little nap.