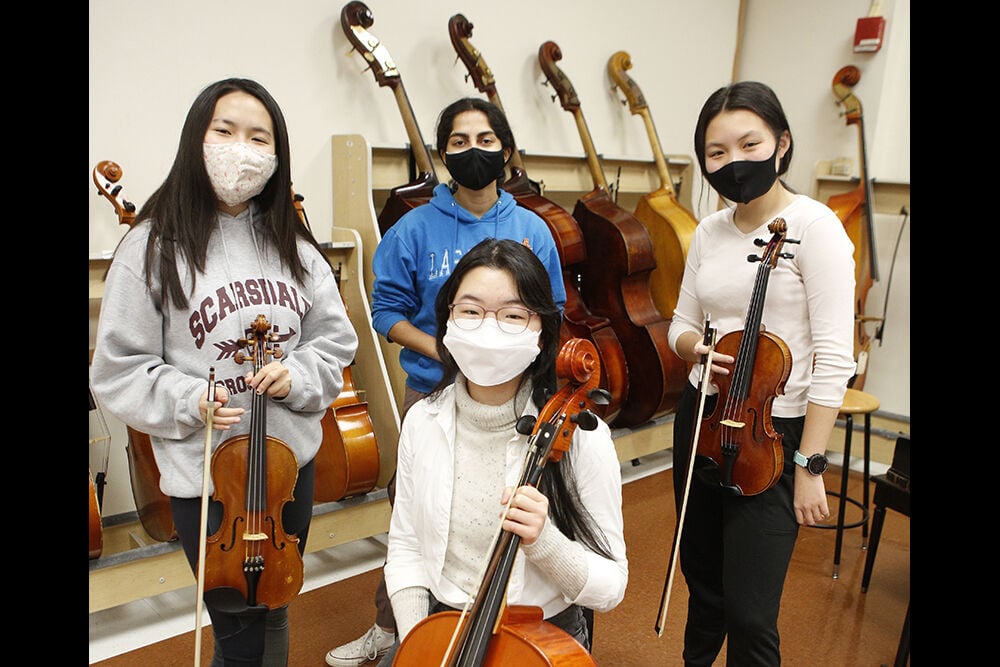 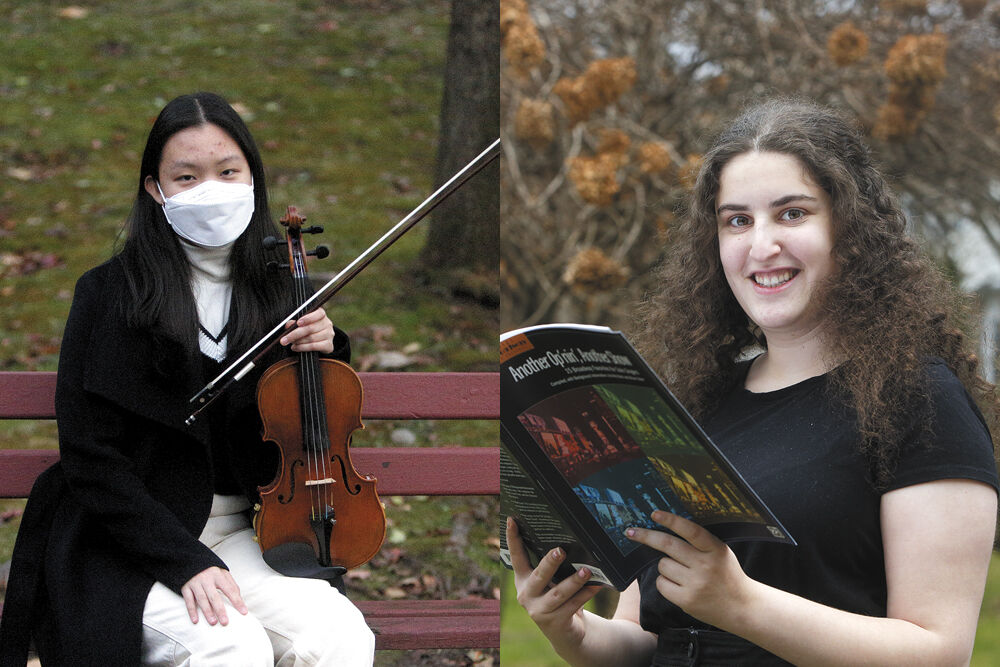 Every year thousands of music students across the state participate in the New York State School Music Association (NYSSMA) festival. Each student performs rudiments and a solo piece in a stressful audition, a one-shot chance to earn the honor of being named one of the best musicians in the state. At stake is the chance to earn the coveted title of All-State.

Especially in a competitive state like New York with many talented musicians, to earn All-State honors one has to be perfect and earn a 100 score on the audition. Each student selects a piece from a list provided by NYSSMA and then trains for months to master that piece. This year five Scarsdale High School students and two from Edgemont Jr./Sr. High School earned All-State honors for scoring 100 on their NYSSMA audition.

“It’s really hard to get in, a very competitive process,” Scarsdale High orchestra director Amédée Williams said of the All-State competition. “They worked really, really hard and it paid off. I think they’re all pretty excited that they got accepted.”

In a normal year, the All-State selections would then get the chance to perform in a festival in Rochester, New York, but this year there will be a virtual performance.

Senior Emily Hansen earned the distinction of being a two-time All-State honoree — she won the honor last year as a junior and now again as a senior.

For her audition she sang in German as she performed “Vergebliches Standchen” by Johannes Brahms.

“It is certainly a real honor to be selected for the ensemble and I feel very lucky that I’ve had access to such wonderful teachers and programs that have prepared me to perform at that level,” said Hansen. “I was so excited to be selected for All-State again this year. Last year, I knew it was important, but I didn’t know too much about it. The three-day festival last year ended up being the most amazing experience. I met so many great friends, and the feeling of performing with an ensemble that skilled is really fulfilling. I’m sad that we will be online this year, but I am looking forward to it nonetheless.”

At SHS, Hansen is co-president of the a cappella group Noteworthy. Outside of school she sings with her church choir and plans to attend a summer festival in Austria. Since sophomore year she has been part of the Manhattan School of Music pre-college conservatory in New York City.

Since she started playing violin at age 4, Keerthana Chari has always enjoyed music and taken it very seriously. She has gone through the NYSSMA process every year since third grade, earning All-County, area All-County and now the highest honor with All-State.

“It means a lot to finally have worked my way up to All-State,” said Chari. “It’s a culmination and you can see your progress. It’s cool to be recognized. It’s been a nice motivation and a goal to see how far you can get.”

In addition to playing at SHS, Keerthana plays with the orchestra at Hoff-Barthleson Music School, takes private lessons and has attended summer music camp in Maine.

One of the keys to success in the NYSSMA process is to master the solo piece you have selected to perform. For senior Vivian Guo, the piece she chose was the “Introduction and Rondo Capriccioso” by Camille Saint-Saens.

“It’s capricious; it’s always changing its mood. When I played it I had an image of a woman dancing in a red flamenco dress,” Guo said of the song she performed to earn All-State honors. “It’s been one of my big goals since middle school. I was very happy when I heard I got in.”

For Joanna Wang, music is a big part of her life as she plays violin in the orchestra and is also an accomplished piano player.

She started playing violin in third grade and has worked her way up through the NYSSMA process, earning area All-State as a sophomore and now All-State as a senior. She performed a Bach partita for her solo piece during the audition.

“I was actually really surprised [when] Mr. Williams called me to tell me that I got in,” said Wang. “I feel quite honored, very thankful for everyone who helped me and glad the hard work paid off.”

In addition to playing with the Hoff-Barthelson orchestra, Wang is also part of the Manhattan School of Music pre-college conservatory.

For the second year in a row, Karen Lee was named an alternate All-State on cello after earning a 100 score on her NYSSMA audition. She performed the “Concerto in A Minor” by Saint-Saens for her solo piece.

“Music has been a big part of my life,” said Lee, who has played cello since the age of 9. “It was nice to know that I worked hard and earned it. It does take a lot of time.”

Lee has played with the Hoff-Barthelson orchestra and attended various summer music camps, including the Green Mountain Chamber Music Festival.

This year she earned a seat with the New York Youth Symphony Orchestra, which usually performs at Carnegie Hall but its performances were canceled due to the pandemic.

From Edgemont, Jaime Kaufman sang “Everybody Says Don’t” by Stephen Sondheim for her solo piece to earn All-State treble chorus alto 2 honors. Kaufman also plays tenor saxophone and clarinet in the Edgemont band, and she said the experience of playing an instrument and reading music really helped her with the rudiments and sight  reading portions of the NYSSMA audition.

“I was super excited when I found out I made All-State and I still am,” said Kaufman. “It is a tremendous honor. I love that my efforts are being recognized. Performing with other musicians who have achieved this level helps me improve … The conductors are amazing; I learn something from each conductor … I get to meet students from different schools; I recognize some of them from past years.”

In addition to performing at EHS, Kaufman has been in summer music programs with the Westchester County music program and at the SUNY Purchase Summer Vocal Intensive. She also traveled and performed in Europe with American Music Abroad. She sings with HaZamir, an international Jewish teen choir, that performs concerts in both Hebrew and English;. They were scheduled to perform at Lincoln Center this summer but the event was canceled due to the pandemic.

Edgemont senior Emily Jeong has also worked her way up through NYSSMA to earn All-State honors on violin.

“I’ve been playing since I was about 5. Even after 13 years of playing I had to work up to All-State, so it’s definitely exciting that I finally got there,” said Jeong. “It will kind of put a closure to my violin career before I move on to college.”

Jeong performs with the Hoff-Barthelson chamber and festival orchestras and takes private lessons, which helped her reach the All-State level on the violin.

Due to the pandemic, the NYSSMA process and the All-State honorees will miss out on the chance to perform at the annual music festival in Rochester. Instead, they will participate in virtual concert performances, and Jeong and the rest of the All-State performers will try to make the best of the situation as they appreciate the honor of being named All-State.

“I was looking forward to the festival, but being part of the virtual orchestra in a way is a unique opportunity,” said Jeong. “The virtual performance is probably never going to happen again, so that’s pretty exciting to be a part of it.”