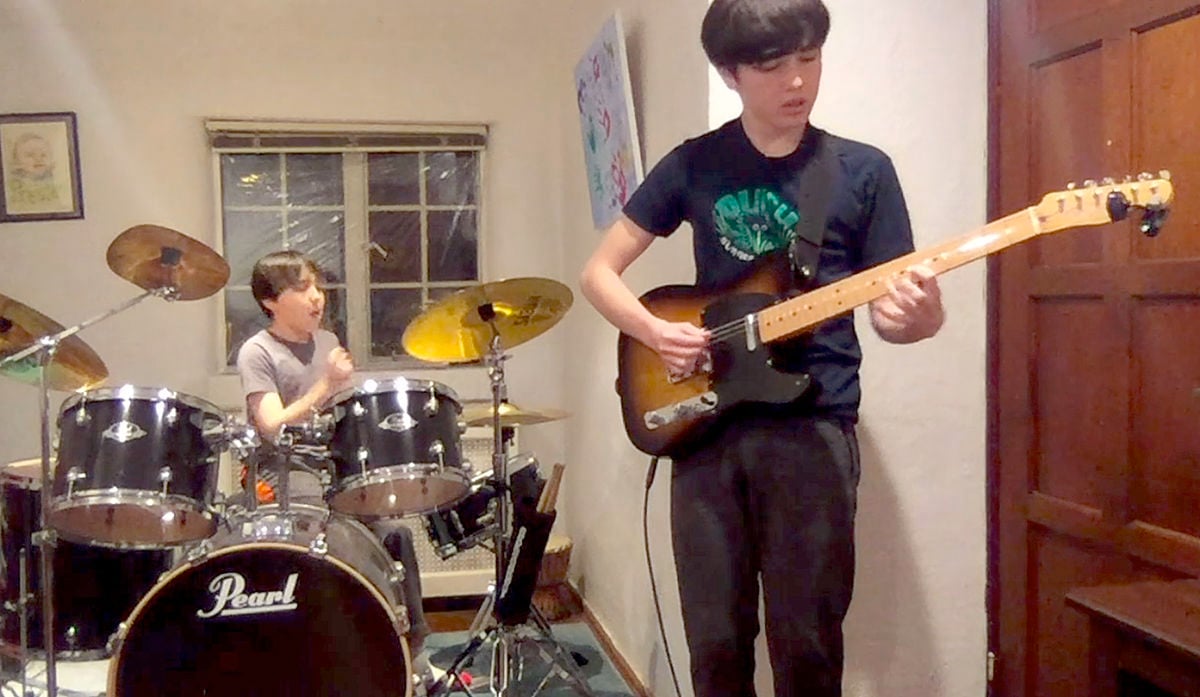 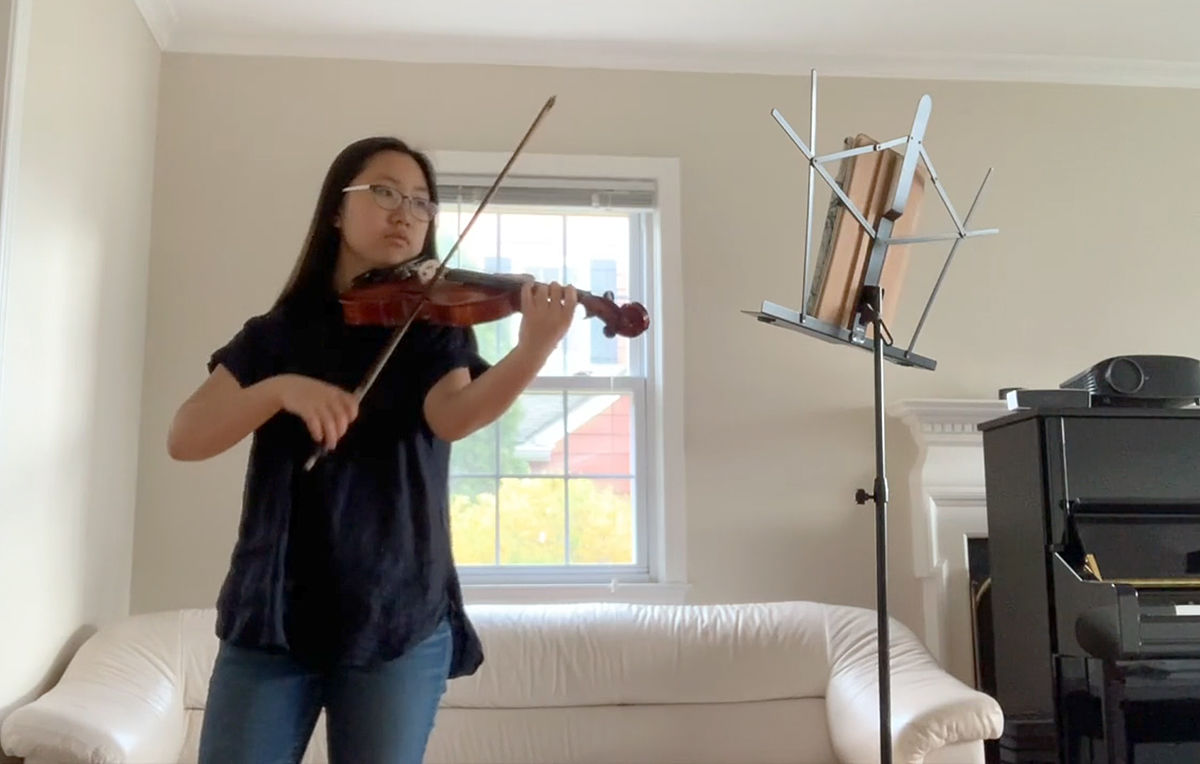 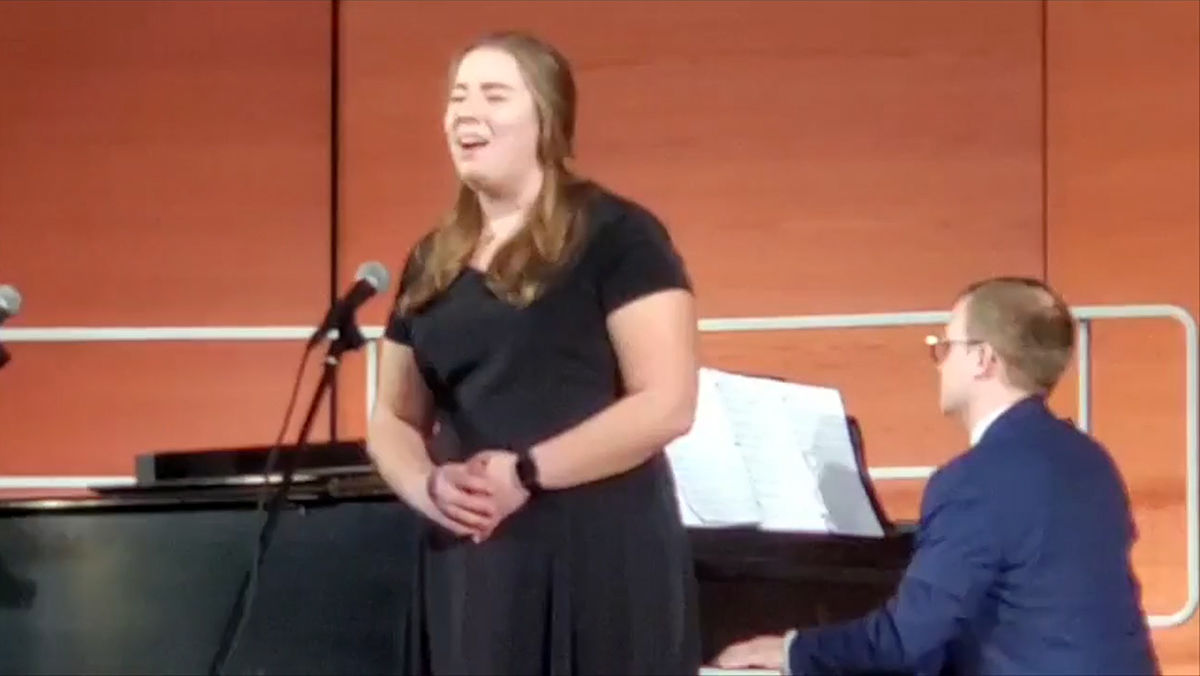 Kelsy Hogan sings “A Part of That” from the musical “The Last Five Years.” 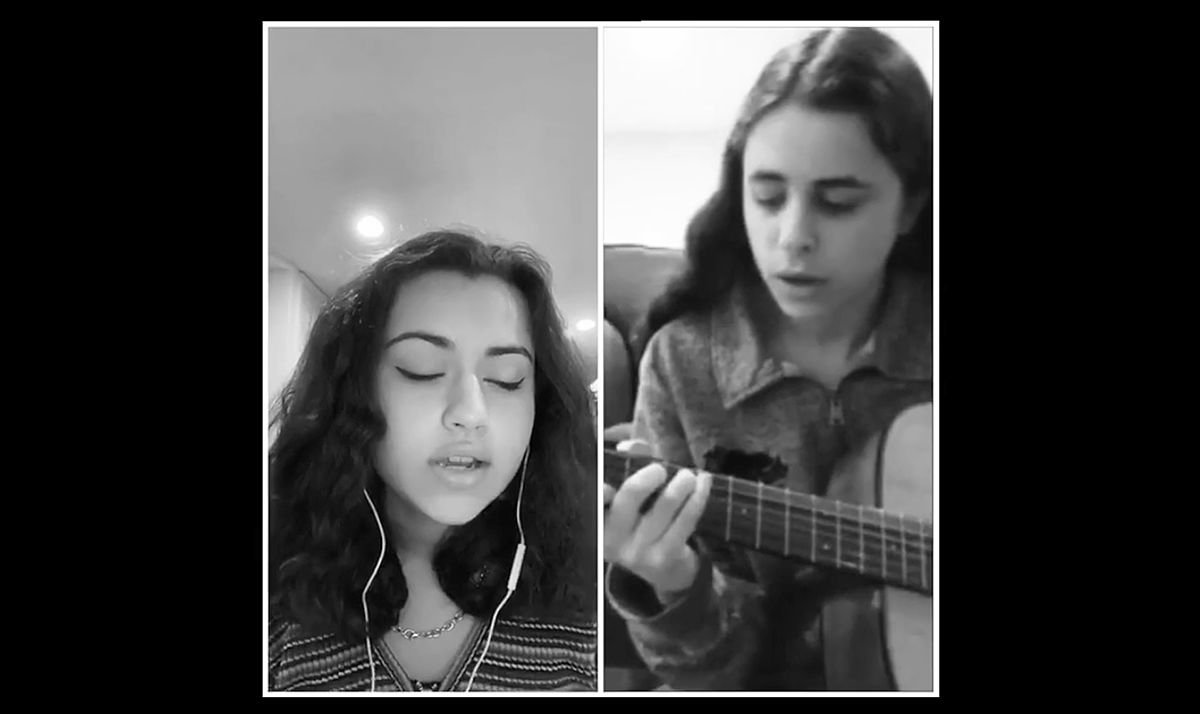 Simran Ruta and Sarah Silverman perform “Go As We Grow” 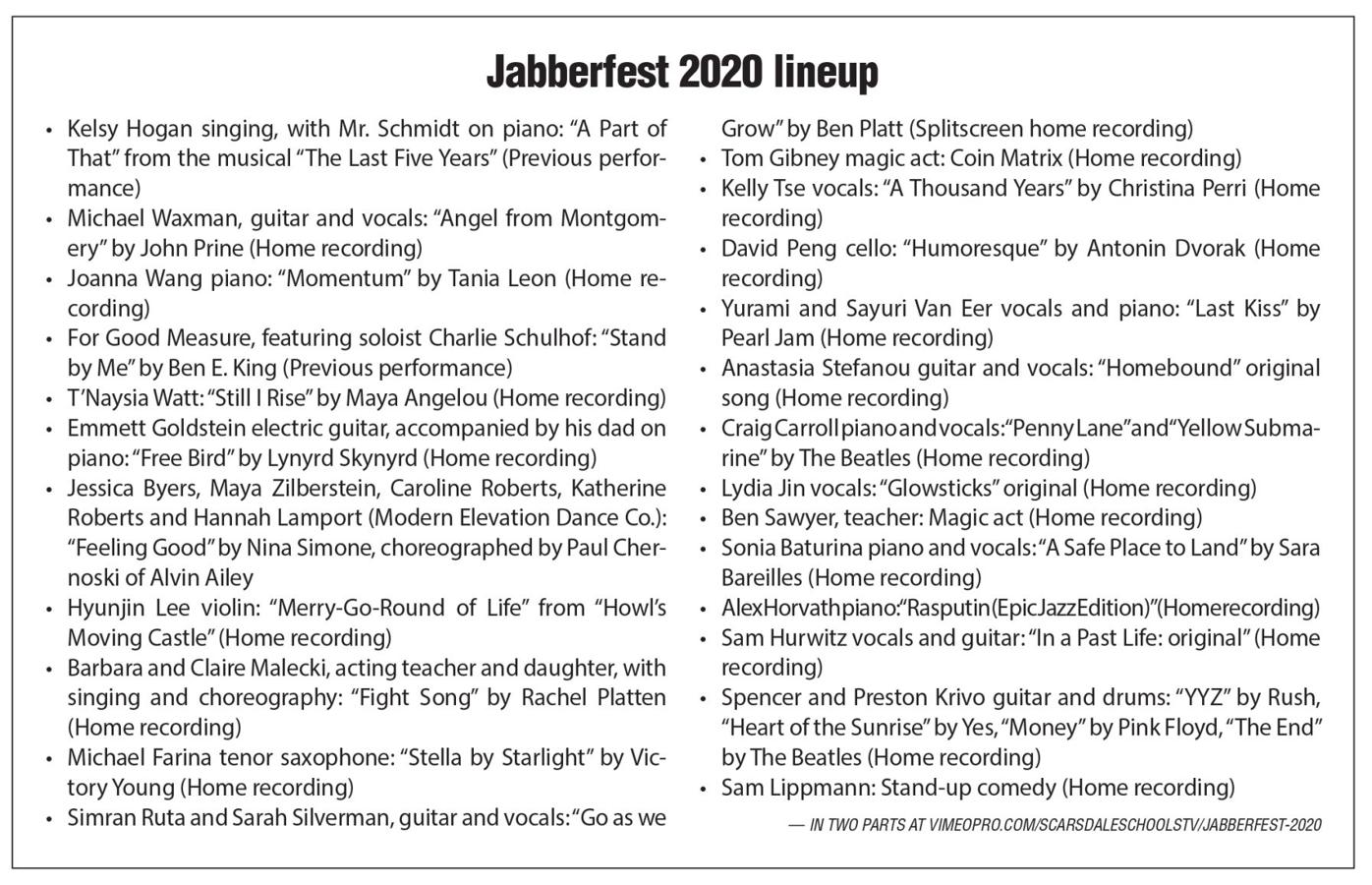 Kelsy Hogan sings “A Part of That” from the musical “The Last Five Years.”

The show(cases) must go on.

Like everyone else these days, they adapted and turned to the internet. Jabberfest is typically held in the Scarsdale High School auditorium the Friday before spring break, which this year would have been April 3. Instead, with everyone sheltering in place at home, the event was pieced together from videos submitted by musicians and magicians. “We’ve had a lot of positive feedback thanking us, saying it made their day or brightened their spirits,” faculty adviser Jeanne Cooper said.

Senior T’Naysia Watt took some time to develop perspective on everything that was going on around her. She was mourning the loss of several potential lost experiences, but once she looked outside her own individual disappointment, she knew that “something beats nothing” when it came to the showcases.

“My thoughts quickly changed when I realized that COVID-19 is affecting others’ lives much more harshly than it is mine,” Watt said. “People are losing their lives due to this virus. People are burying their loved ones as a result of it.”

Watt, who not only is on the Jabberwocky staff but also was a performer in Jabberfest, knew since last spring that she wanted to recite Maya Angelou’s powerful “Still I Rise.” She could never have imagined then the impact of her decision.

“It was because of this poem, as well as other factors, that I am able to get through this pandemic knowing that when it blows over everything is going to be different from before, life will be better than before. I wake up every morning with this understanding, which makes it easier for me to not miss what life was like before. There is an unknown plan mapped out that has a storm set for us right now, but sunny days are ahead. COVID-19, we will rise.”

Junior Michael Waxman said Jabberfest is one of his favorite events of the school year and he was upset to see the live show called off, but said, “The virtual Jabberfest was great to take part in, and all of the acts were fun to watch.”

Waxman was originally going to perform Lynyrd Skynyrd’s “Free Bird” with friends, but he had to shift direction to a solo performance of a John Prine cover, “Angel From Montgomery,” with vocals and an acoustic guitar. Waxman said he chose that song a few hours before Prine’s COVID-19-related death as he was looking to showcase newfound quarantine guitar skills he learned with his dad’s help.

“I was pretty shaken by the news and decided to add a few written words to the beginning of my performance to commemorate Prine,” Waxman said. “Overall, it was an emotional night that I will always remember because of the virtual Jabberfest.”

The major downside to the virtual Jabberfest was the exclusion of many acts that didn’t have footage to share or couldn’t put spliced videos and sounds together. “That cut out a lot of performances,” Cooper said. “This year if we’d have been able to do the live show, we had so many people who wanted to do it we were planning to run right through the lunch periods instead of stopping for lunch because that’s the only way we could fit everybody in.”

The entire schedule had been planned out prior to the March 9 school closure and subsequent extensions, so those plans got scrapped and reworked.

While some acts were lost, some were added, such as Tom Gibney and teacher Ben Schwartz doing their own magic tricks. “It was really cool to get the magic tricks that you can do up close on camera, but hard to put that show on live,” junior Keerthana Chari said.

While the show featured mostly solo acts, there were family acts like sisters Yurami and Sayuri Van Eer performing “Last Kiss,” brothers Spencer and Preston Krivo doing a classic rock medley, Emmett Goldstein on electric guitar accompanied by his dad on piano for “Free Bird” and the mother-daughter duo of teacher Barbara Malecki and her daughter Claire singing and dancing to Rachel Platten’s “Fight Song.” Simran Ruta and Sara Silverman did a split screen guitar/vocals cover of  “Go as we Grow” by Ben Platt.

The live show typically starts with classical music and ends the day with rock music, but the Jabberfest staff decided to mix the order up when they edited the video in iMovie. “We got a lot of original songs because when you’re home during quarantine, they had more time to work on their music,” Chari said.

Marie Valentine, a teacher at the high school, was the first to contact Cooper saying how important holding the event would be for morale with so much uncertainty and stress for students and staff alike due to coronavirus quarantine. The student government advisers echoed the sentiment, so Cooper took the idea to Chari, Jabberwocky’s editor-in-chief. After a Zoom meeting with the entire staff, everyone was onboard.

“For me especially this event is super important because it’s a really nice chance for everyone to appreciate all different genres of performance,” Chari said. “I’ve always been impressed with how respectful and appreciative the whole school is that day for each of those acts that goes up on stage. The members of Jabberwocky who were creating the show were all looking forward to having that day to work together. It’s fun to go backstage and work on running the show.”

Jabberfest has evolved over the years and this year was just another in a long line of changes for Cooper, who took over as the Jabberwocky adviser in 1984, continuing the grand tradition that started in 1936 at Scarsdale High School. Back in ’84, the students said they would handle Jabberfest, so Cooper had limited involvement. Deemed too loud, too unorganized and too disruptive that year, the administration said the event was being shelved until Cooper saved it by promising a better outcome the following year.

Since that time, Jabberfest went from lasting one period to spanning an entire school day for the celebration of the performing arts. Jabberfest outgrew the former black box amphitheater setting, a multiple classroom setting and the high school’s Little Theater — now teachers book the entire day’s worth of seats in the 700-seat auditorium within an hour of the release of time slots.

“It moved into the auditorium, which I was not initially happy about because I feel like the auditorium is a much colder environment than the amphitheater/Little Theater used to be,” Cooper said. “What I liked about it was that intimate feeling, but audiences kept expanding and eventually we outgrew the auditorium… Now we livestream it to classroom Smartboards for the last 10 years or so with Dave Berry taping and editing it.”

With Jabberfest posted online at https://bit.ly/2zCrN4Z, it was time for the Jabberwocky staff to focus on their other major undertaking. Like Jabberfest, Jabberwocky the lit mag will appear in an altered state online. Submissions can still be made into early next week to jabberwockysubmissions@gmail.com.

“Maybe people have been sitting around writing some poetry or writing pieces about how they feel about being quarantined,” Cooper said. “All of those things are submissable.”

The camaraderie of Jabberwocky and Jabberfest has been lost to an extent with Zoom meetings and less personal interaction replacing after-school meetings, but the experience of adapting to serve the school community and coming through with flying colors will make this year’s staff stand out among others, she said, adding that the online art and writing magazine will be a great way for the group to end a year that to many students feels like so much has been lost.

“It creates a sense of the artistic community that they have a way to experience their art even though they no longer have those classes since we’re not in school,” Chari said. “There were frequent art showcases and orchestra and band concerts — all those events that were canceled. We’re helping them still have these experiences.”

Social distancing and shelter in place will certainly be a theme throughout Jabberwocky this spring. “A lot of the work from Jabberfest and Jabberwocky have been a product of people responding to COVID-19, their own emotions toward that,” Chari said. “To share in that perspective with other high school students is important because a lot of people are struggling with this whole shift in lifestyle and they can see what others think about it artistically and visually, or entertaining in an appealing format is a great opportunity.”