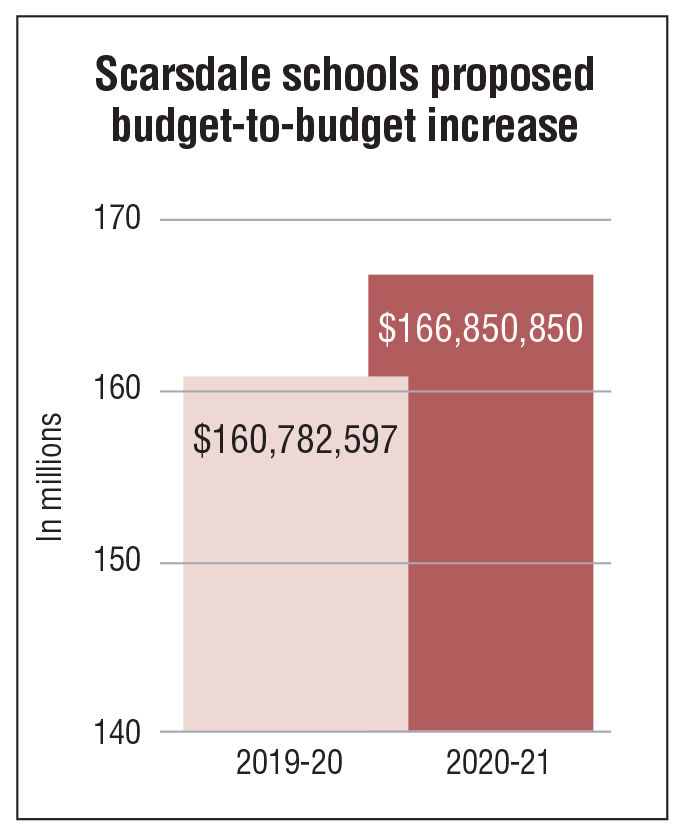 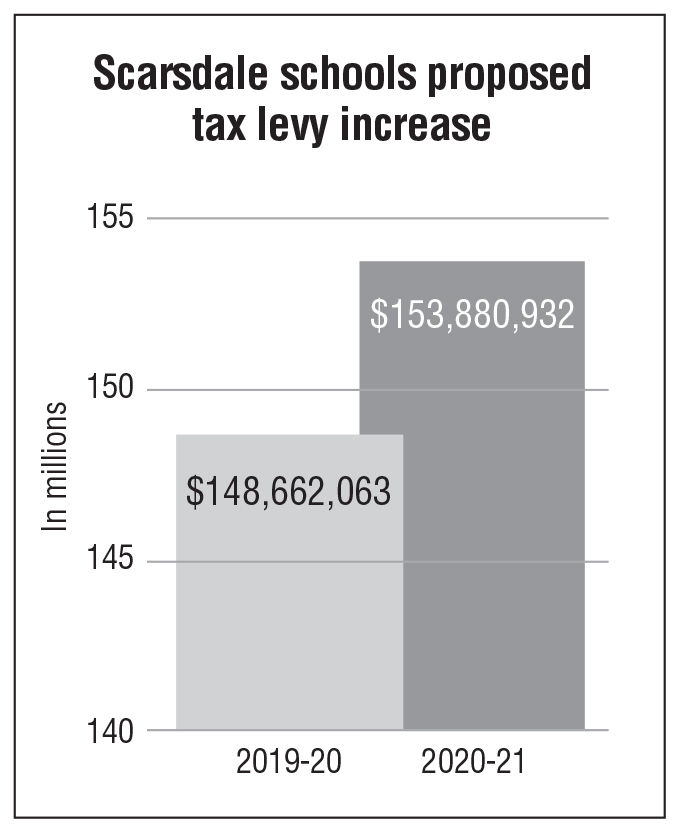 At the first school board budget session Feb. 3, the district proposed an approximately $6 million increase from last year’s adopted budget.

At the meeting, assistant superintendent for business Stuart Mattey presented the district’s preliminary proposed budget of $166,850,850, a 3.77% increase over last year.

The allowable tax cap for the district this year is 3.54%, which means the district is 0.03% under the tax cap, or $49,266. Because the proposed tax levy is under the cap, a simple majority approval of the school budget is adequate and approval by 60% of voters won’t be necessary.

The district is anticipating a 46.39% budget-to-budget increase in sales tax revenue at approximately $1.5 million.

The main budget drivers this year are $3.07 million for contractual salary increases for all employees, including 4.0 FTE (full-time equivalent) teacher retirements and the addition of 3.4 FTE; $486,000 for the continued increased enrollment for special education; $863,000 for the retirement system contribution rates increasing; $762,000 for the district’s self-funded medical insurance; $524,000 for other employee benefit increases; and $561,000 for facility upgrades that include the high school auditorium.

The auditorium upgrade is estimated to cost $2.3 million and is being partially funded by a $736,431 debt service fund transfer. “Time is of the essence,” Mattey said. “If we move forward, it’s a large project.”

The special education department is estimated to be approximately $968,000 over budget from the 2019-20 adopted budget, with a majority of the expenses coming from BOCES services. The proposed 2020-21 budget allocated $15,616,807 for special education, a 9.35% budget-to-budget increase, or 2.40% increase to the estimated expended budget.

There are 1,962 students eligible for transportation to all schools in the district, which also includes an additional 288 students who are transported to 63 private and parochial schools and special education programs.

Safety, security and emergency management services proposal totals $1,188,871, which is an increase of $71,840 from last year. The increase is for the purchase of security-related supplies and equipment, which has a planned cost of $52,000.

The budget continues funding for safety monitors in all school buildings, which costs the district $835,616 in contractual costs. In addition, $176,255 is set aside for security consultation through Altaris Consulting Group.

The district will be moving forward with a three-phase plan to expand cooling within the schools. More than 50 window unit air conditioners were placed across the district last spring and split units were installed at Heathcote Elementary School over the summer. Roof top air conditioning units were installed over the summer at the Quaker Ridge and Fox Meadow libraries and the 2020-21 budget includes installing ceiling fans in the elementary school gymnasiums.

Because of district plans to expand cooling in the schools, the budget for the New York Power Authority has been increased by $61,346 in anticipation of additional air conditioned spaces.

The amount of $2,060,755 is proposed for interscholastic athletics, a $178,975 or 9.51% budget-to-budget increase. The increase in the budget was primarily due to increased coaching positions and supervisory positions, the Butler Field track and sound system, and estimated athletic training expenses.

The next budget session will take place on Feb. 10. Mattey will present the facilities portion of the proposed budget.