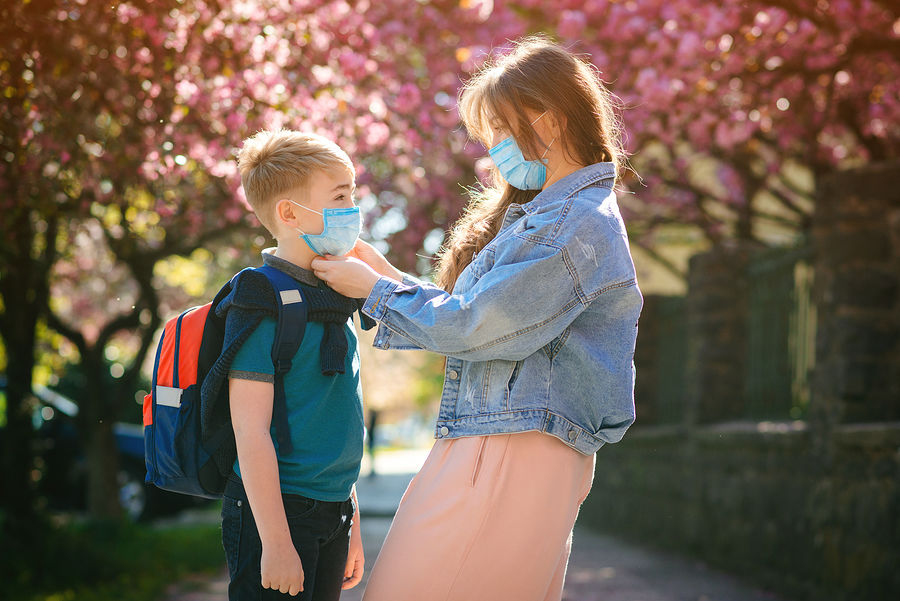 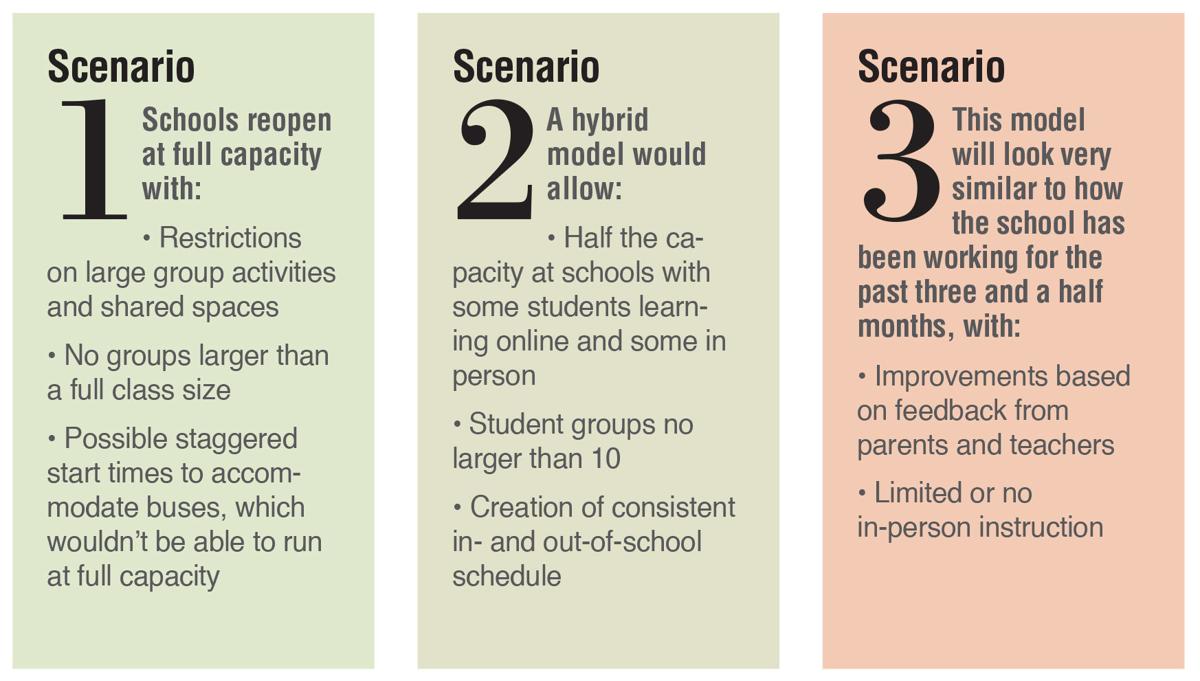 A restart planning steering committee, tasked with strategizing around three potential scenarios for schools reopening in the fall, is set to convene next month, according to Assistant Superintendent for Curriculum, Instruction and Assessment Edgar McIntosh and Director of Special Education and Student Services Eric Rauschenbach. During a virtual meeting of the school board June 22, the two administrators also presented the district’s preliminary thinking on how the restart might take shape and what preparation work needs to be done.

“We are not going to be doing business as usual,” said Rauschenbach. “This really is an exercise in looking at a situation that is unfolding, unprecedented and not the best situation for education. So we’re really going to have to adjust our expectations and adjust our practices.”

When the COVID-19 pandemic shut down schools in March, school districts around the state began scrambling to put in place distance learning curriculum for students of all grade levels. With the course of the virus unknown and a resurgence of the virus possible in the fall, the Scarsdale School District has formed a 26-member steering committee comprised of building administrators, teachers, parents and the school physician, to plan for how school will reopen in September.

The three structures presented for possible reopening include reopening at full capacity with restrictions; a hybrid e-learning and in-person experience; or a continuation of what the school has done since March with 100% of instruction taking place online.

“Next year’s starting structure may not be our ending structure and we may need to be flexible from e-learning to live learning to everything in between as we move along,” said Rauschenbach. “Teachers have worked tirelessly over the last three to four weeks in starting to look at that forward-thinking curriculum and how … we create an environment that can move on a dime and switch from various modes of instruction almost instantaneously.”

The Edgemont School District has also begun planning for three similar scenarios, with a discussion of more procedural information on the agenda for  its school board meeting on July 1.

The final say on how school districts will implement learning in the fall depends on guidance from Gov. Andrew Cuomo, who has indicated in press conferences that schools would be required to file reopening plans over the summer and that guidance would be released in June, with reopening plans due sometime in July. Schools are only allowed to open when the state enters phase 4, which some upstate counties are on track to meet by Friday, June 26.

To formulate and evaluate the three scenarios, the district formed a steering committee and supported it with 10 task-specific groups involving about 100 people to analyze how the school would reopen and handle communications, facilities, food service, human resources, nursing, mental health, transportation and technology. Each task group has area specialists in discussions with representatives from the cabinet and administration as well as teachers and parents.

The steering committee is working off a shared vision statement, which commits to “providing an educational environment that is physically and emotionally safe.” The statement also establishes the importance of nurturing connections within the school community and fostering learning opportunities, no matter the school structure.

Under the umbrella of the restart steering committee is the building operations and instruction group, which is split into sub-groups representing all levels of the district for the high school, middle school, elementary schools and special education.

There are approximately 100 volunteers working within the entire restart structure, with many of the parent volunteers appointed from within the elected leadership of the PTA or PT Council, according to Rauschenbach.

For scenario 1, the district would plan for schools to reopen at full capacity with restrictions on large group activities and shared spaces, as well as no groups larger than a full class size. Social distancing would also force student and staff groupings to remain as static as possible and restrict mixing between groups.

“This becomes more difficult as we move into the middle and high school,” said Rauschenbach. “We’re trying to restrict groups so that there are cohorts of students and not the same level of mixing between groups so that if there is a positive case of COVID, the contact tracing and the spread can be mitigated.”

The steering committee will also consider options for staff who are in vulnerable categories and for the comfort level of students being back in school. Busing would also be problematic, as the Centers for Disease Control currently is  recommending that a child be placed in every other seat, every other row, reducing the buses’ capacity from 66 passengers to 11. Rauschenbach said that buses wouldn’t be able to run at full capacity and the district might have to spread out arrivals and departures with multiple trips, which raises questions about cost and scheduling.

In a full capacity opening scenario, the steering committee would also need to analyze student choice versus limitations on mixing in the high school, how to handle out-of-team classes in the middle school and how specials classes, such as art and music, would run in elementary schools.

In scenario 2, the hybrid model would allow half the capacity at schools with some students learning online and some in person. Major factors to be considered by the steering committee would be figuring out when students are scheduled to be in and out of school with a consistent schedule, how in-person learning and online learning could co-exist from an equity and equality perspective, how teachers and parents would manage child care and how teachers would manage a workload of both online and in-person instruction. Scenario 2 also accounts for a more severe restriction on in-person attendance for groups no larger than 10. If that’s the case, the steering committee will look at how curriculum would be administered and how to balance formal instruction with support.

Both the full capacity and hybrid scenarios would require the district to develop health and safety plans for screening, provide and enforce the use of personal protective equipment and develop protocols for symptomatic students and staff.

Structure 3 will look very similar conceptually to how the school has been working for the past three and a half months, with improvements based on feedback from parents and teachers gathered over the last few months. With limited or no opportunity for in-person instruction, the steering committee will look at parents’ roles in instruction, how to create structures of sustainability and planning for teachers, how to align content, how to increase student engagement, assessment and accountability, scheduling and communication.

“This [scenario] is both the most restrictive model and it is also the one that we have the most experience and the most research on [because] we’ve been doing it for the last several months,” said McIntosh.

McIntosh said large-scale research was available about both the successes and challenges of e-learning, based on more than 1,000 responses from two surveys sent to Scarsdale parents and teachers in March and May. McIntosh added that online learning would also go beyond academics to focus on making connections between students and keeping clubs and student committees active.

Members of the public who spoke over Zoom during the meeting expressed their dissatisfaction with online learning.

Fox Meadow resident Marshall Kitain, a parent of an elementary school student, said that although the shared vision statement was on target, the hybrid and e-learning scenarios didn’t fulfill the vision.

“The hybrid and full e-learning scenarios here do not and cannot fulfill the vision around nurturing connections or fostering meaningful learning opportunities,” he said. “At its core, e-learning is a very poor substitute that leaves kids uninspired and demotivated.”

Kitain called the pandemic “the biggest educational crisis in decades” and added that the district should put more focus and energy on how to get students physically back into school safely and interact with the community more to find solutions.

Similarly, Scarsdale resident Yingyong Chen said e-learning was a failure and suggested the district strive to teach the same level of instruction no matter the scenario. He urged the board to hold the district accountable for upholding that goal and said the district should avoid trying to have the best and most complicated process to figuring out how to reopen.

“We do not want the process to cloud out the actual product,” he said.

Rauschenbach said the district had no choice about its closure and whether the school would be able to offer in-person instruction depends on the governor’s guidelines, likely to be announced in July.

According to the steering committee plan’s timeline, task groups will begin providing specific recommendations for all scenarios in July and will provide an initial reopening plan to the community as soon as possible after state guidance is received.

“We would really love to have our kids back in actual classrooms,” said McIntosh. “We know there is something that’s so incredibly nuanced [and] important … about being in the company of students.”