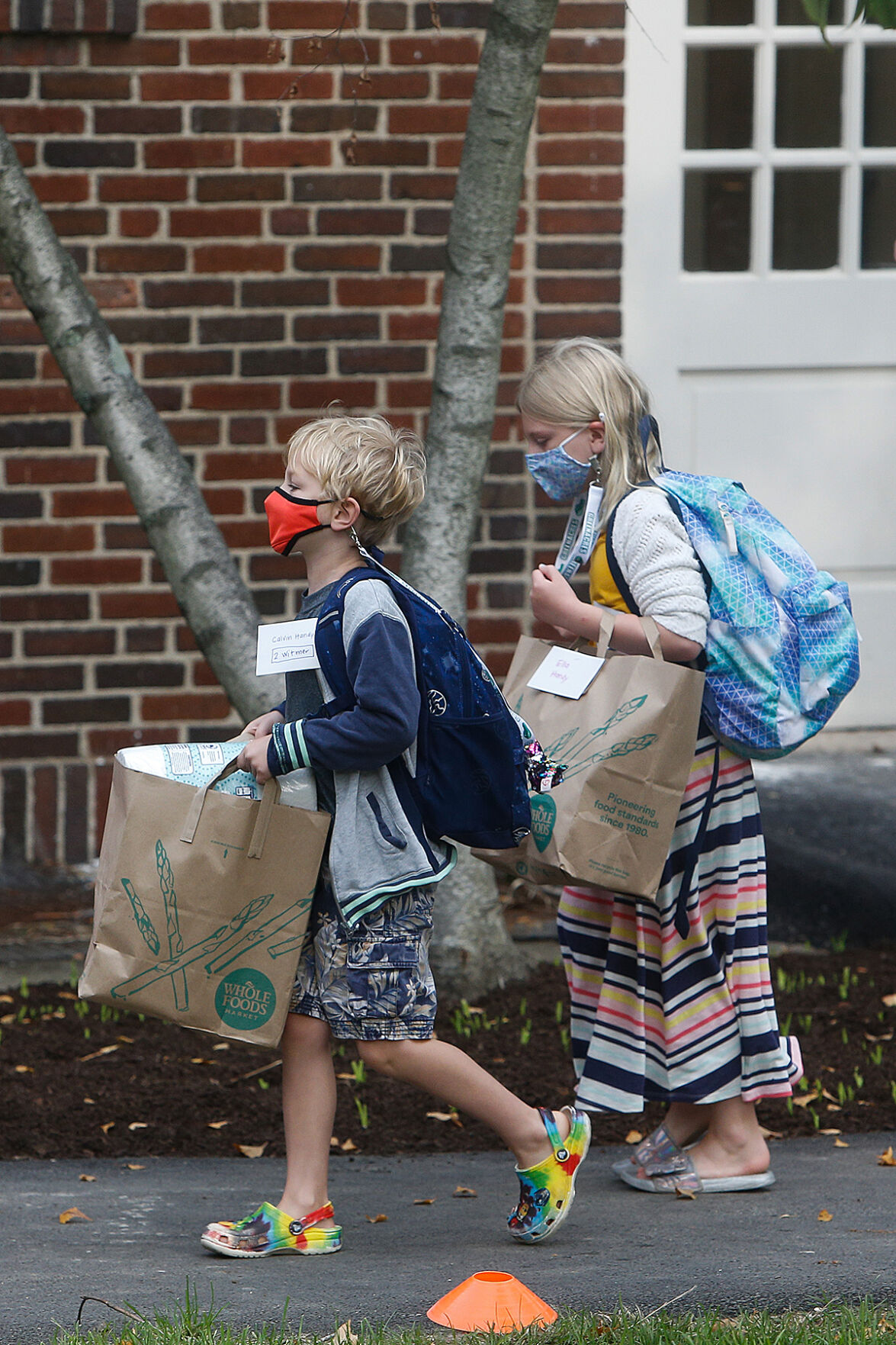 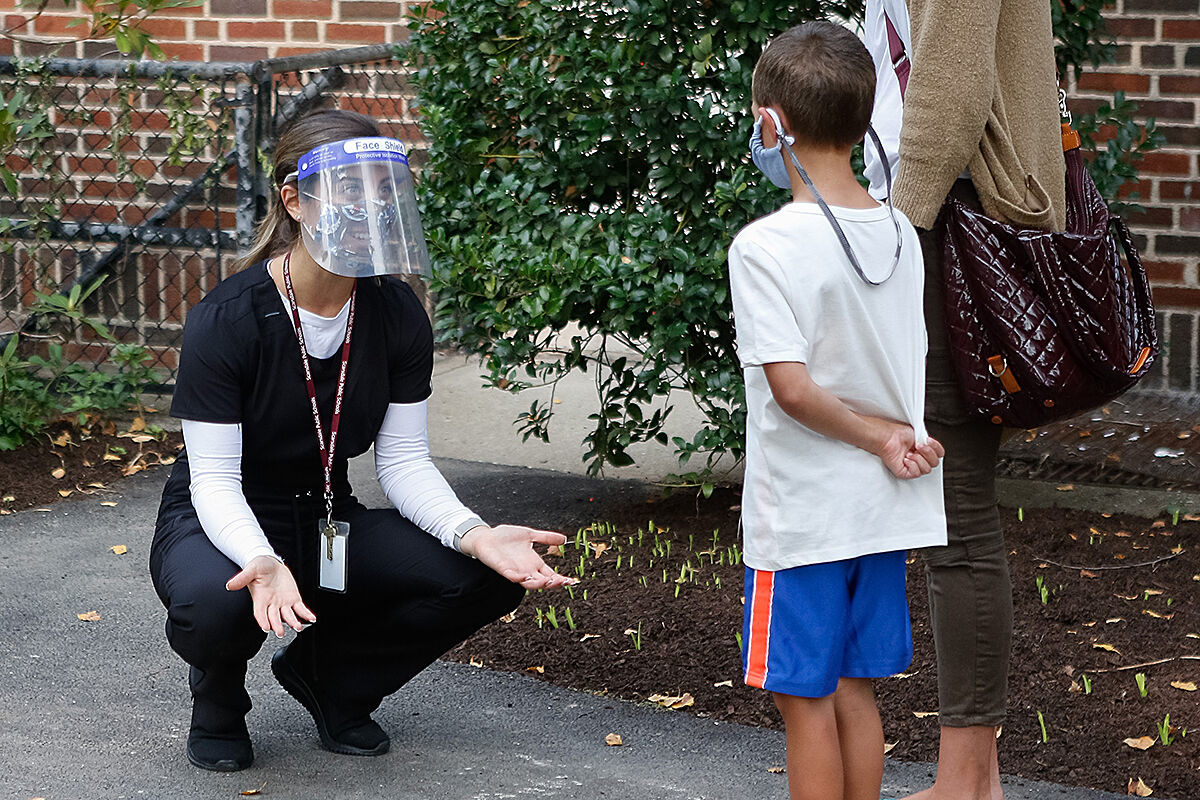 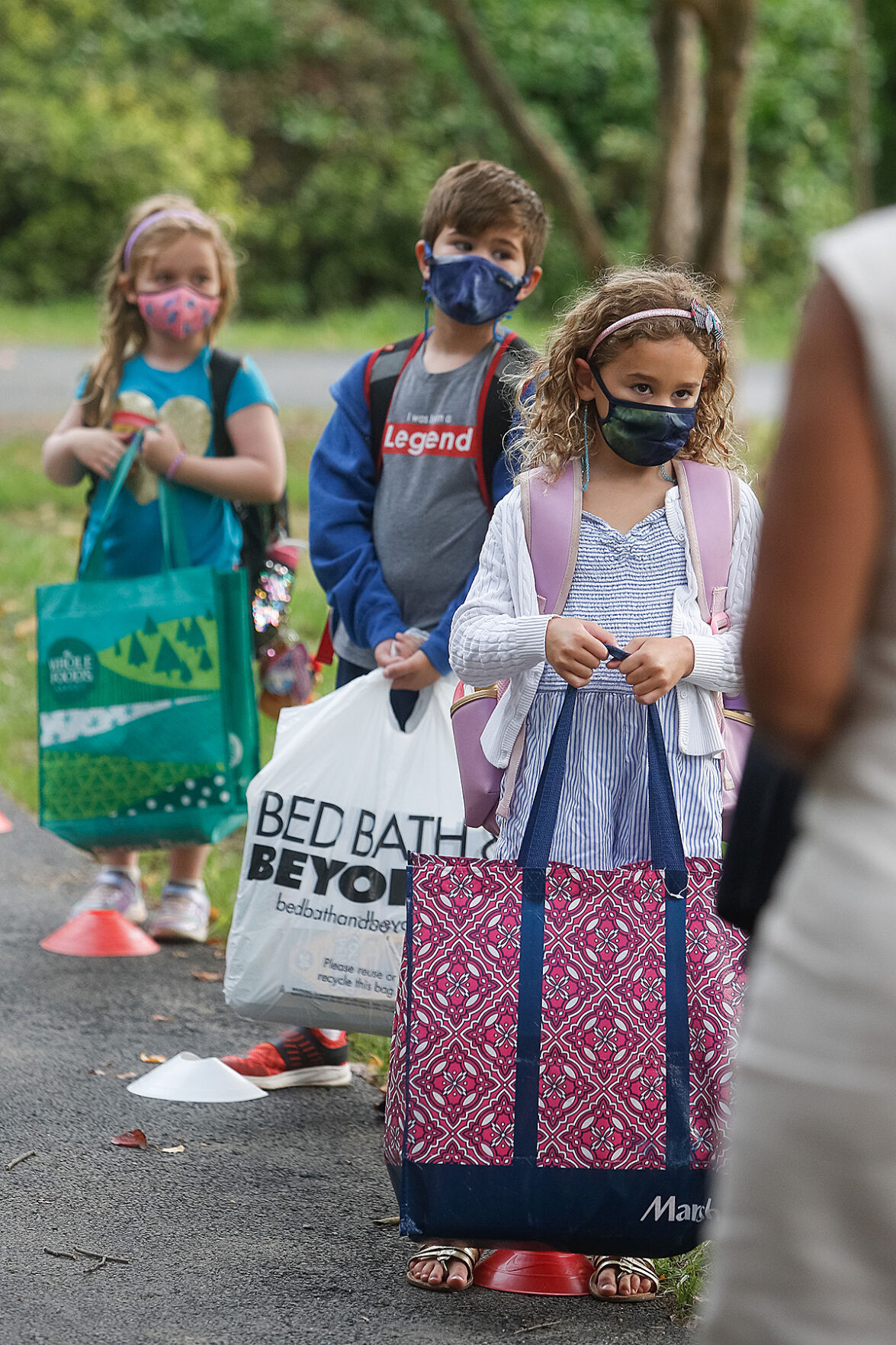 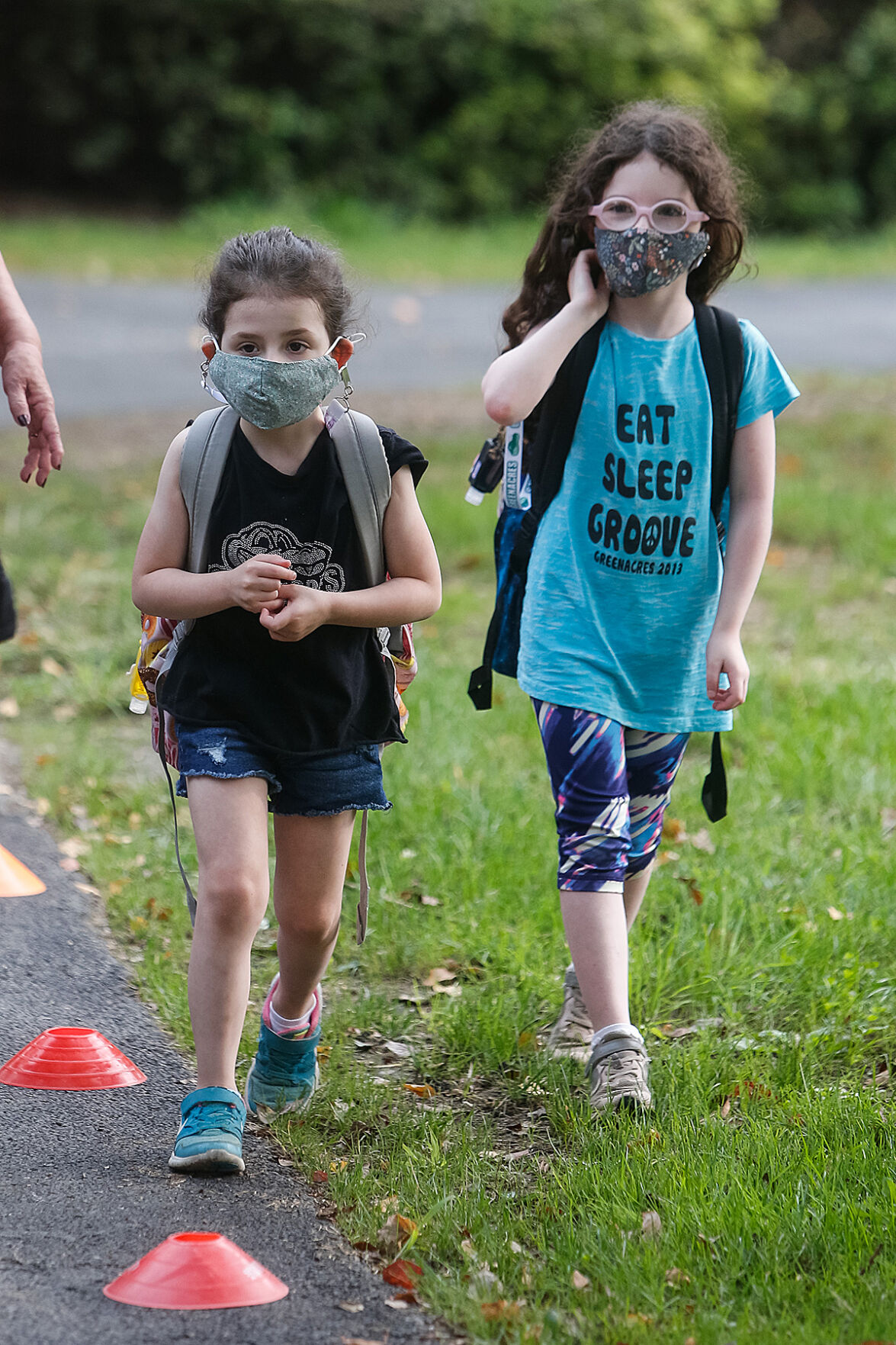 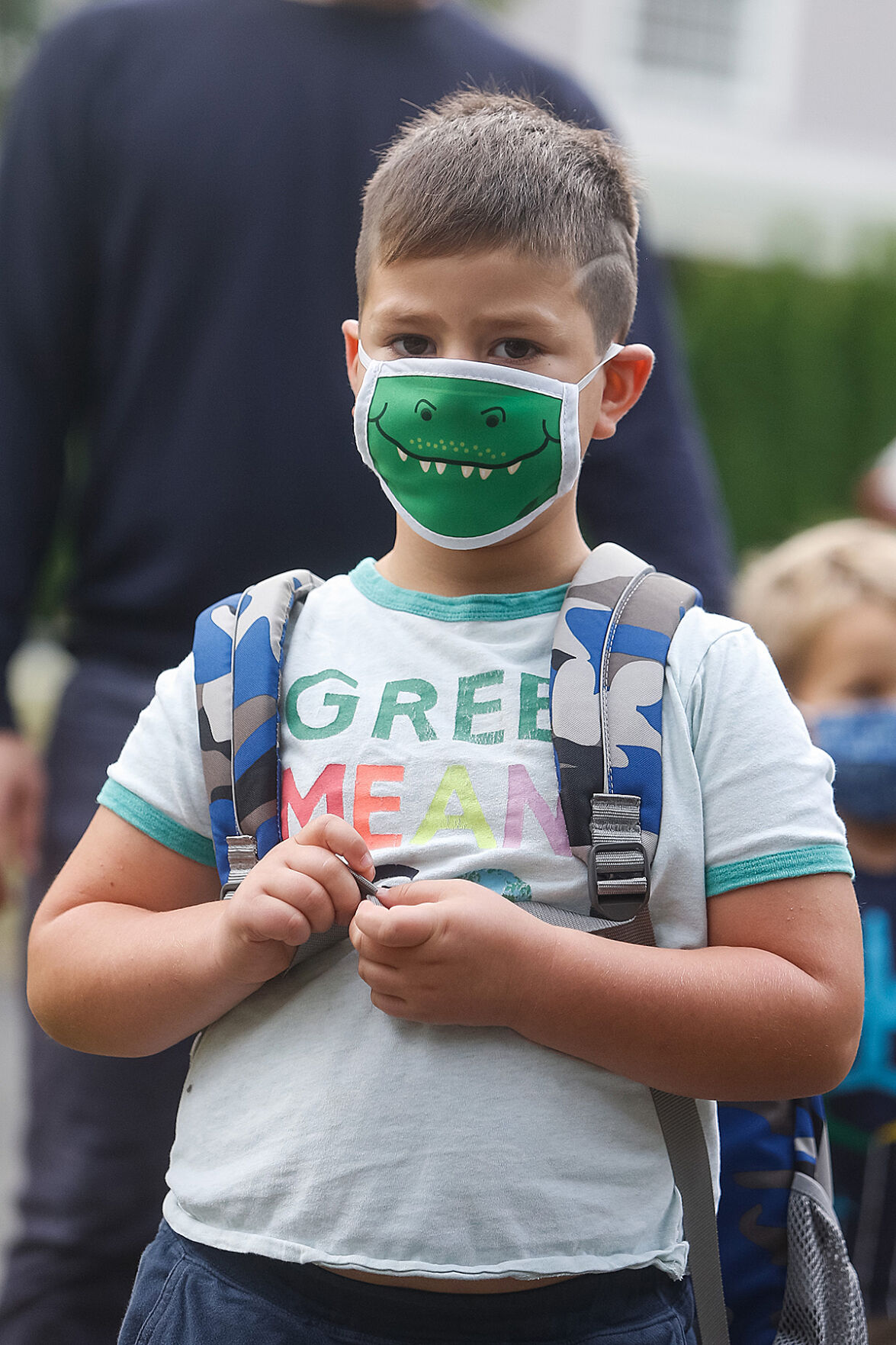 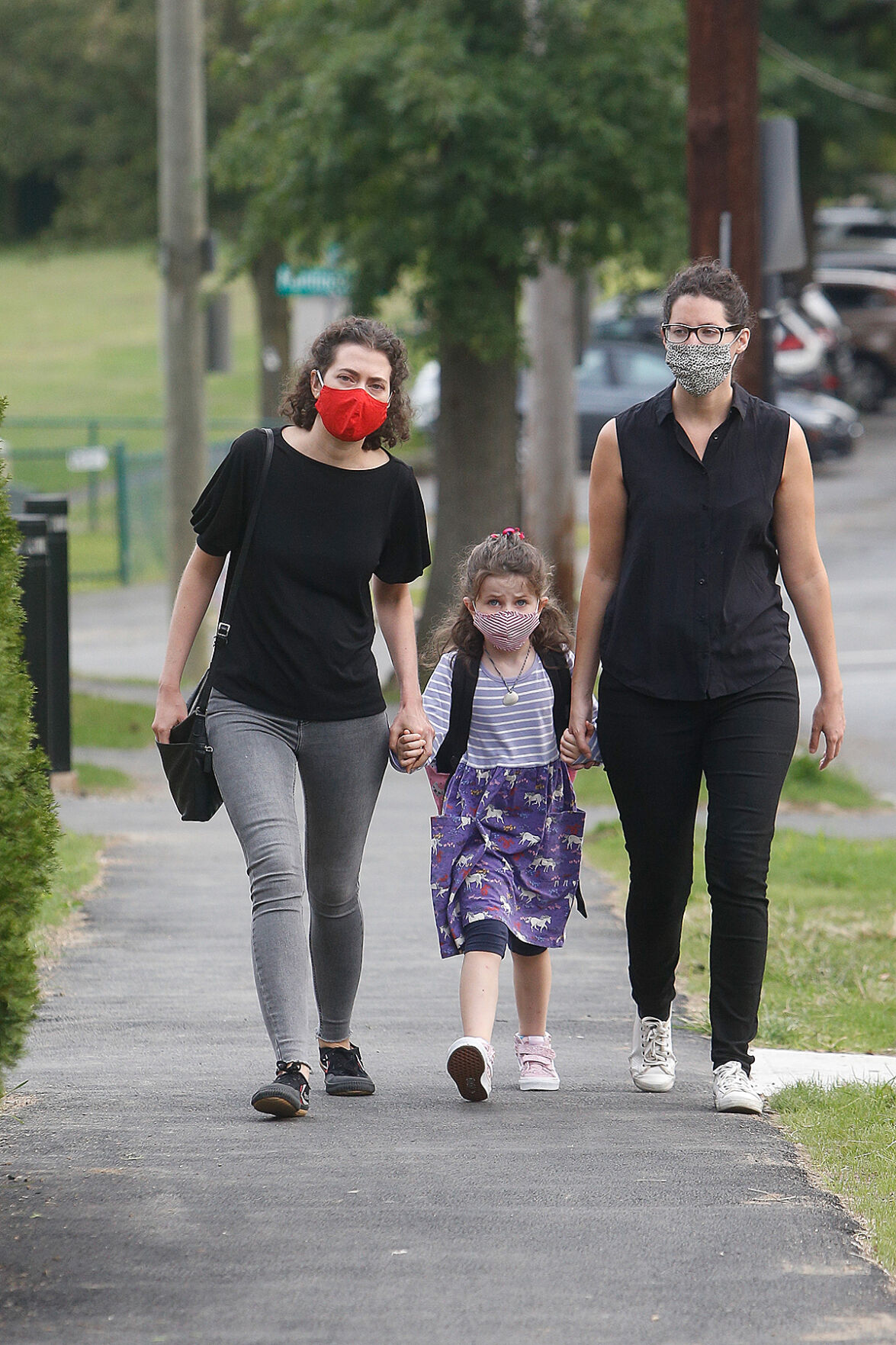 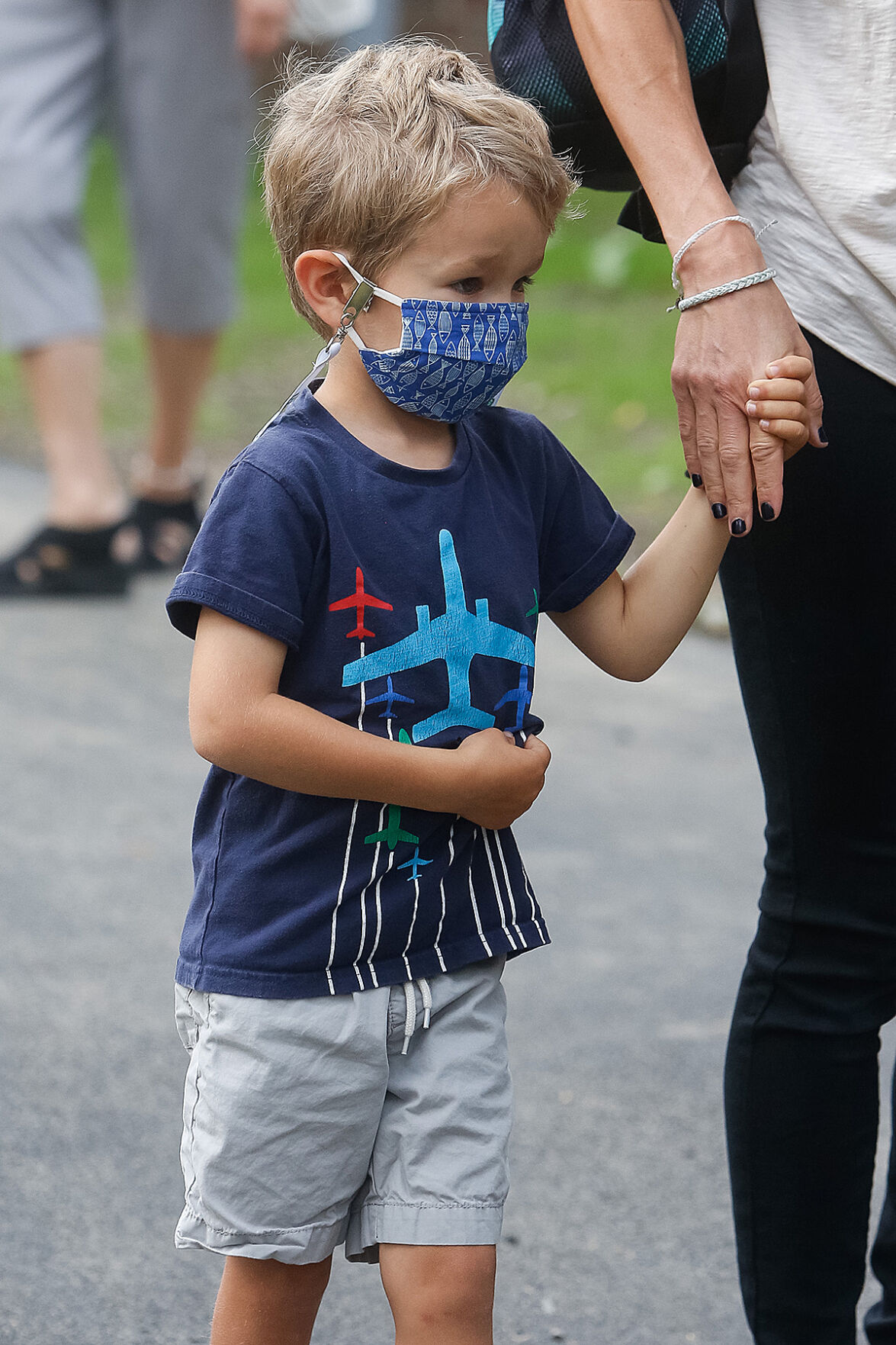 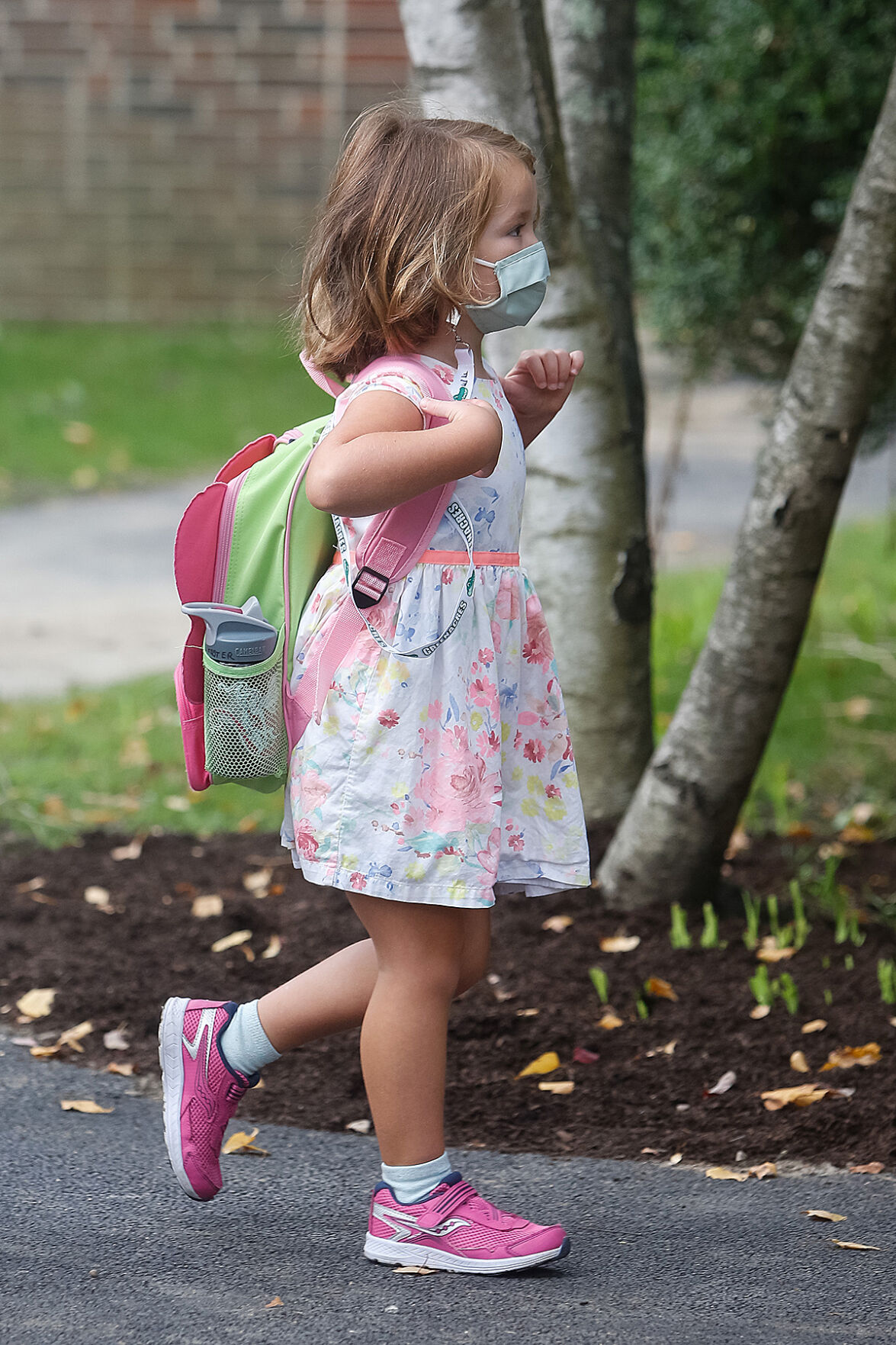 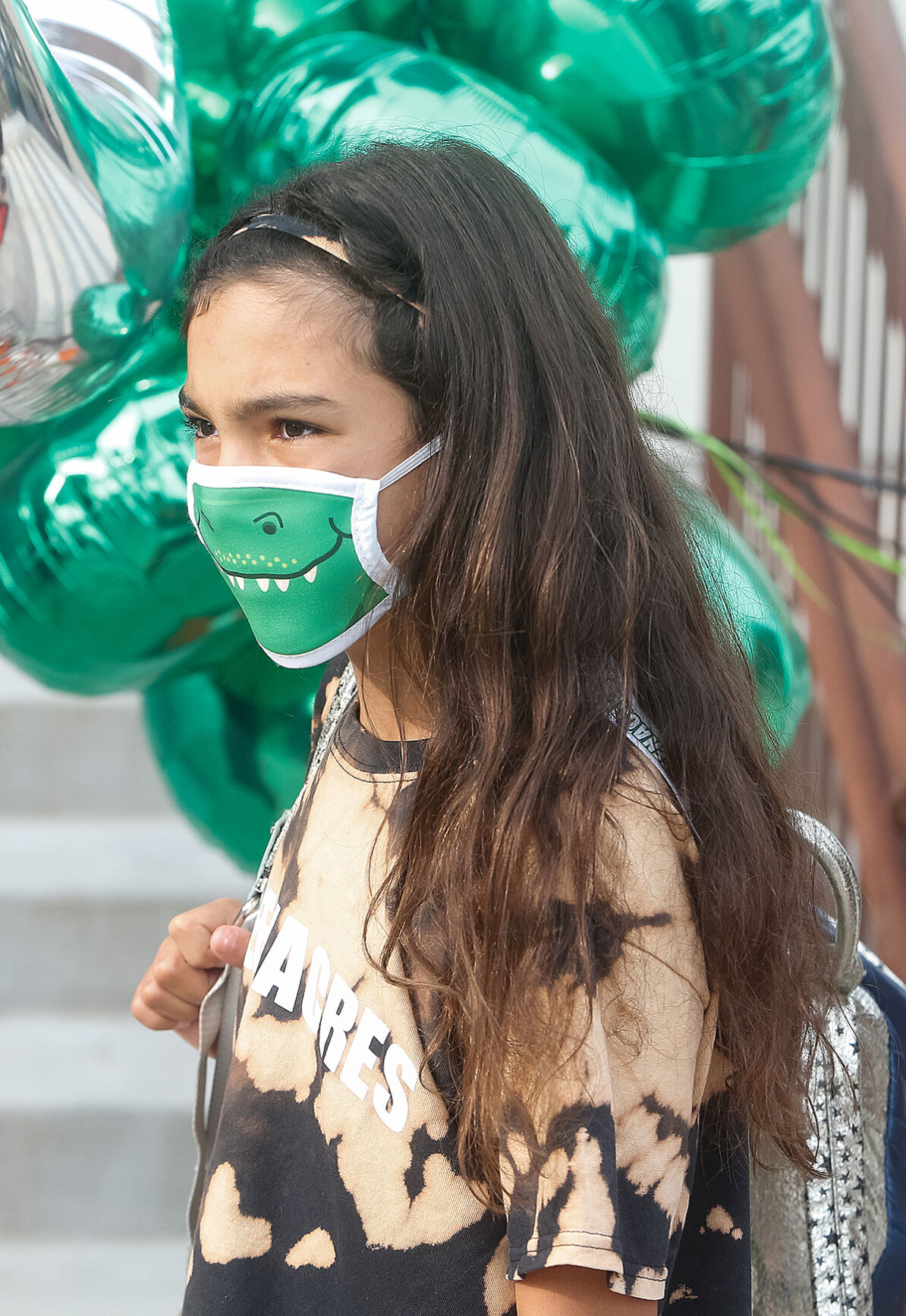 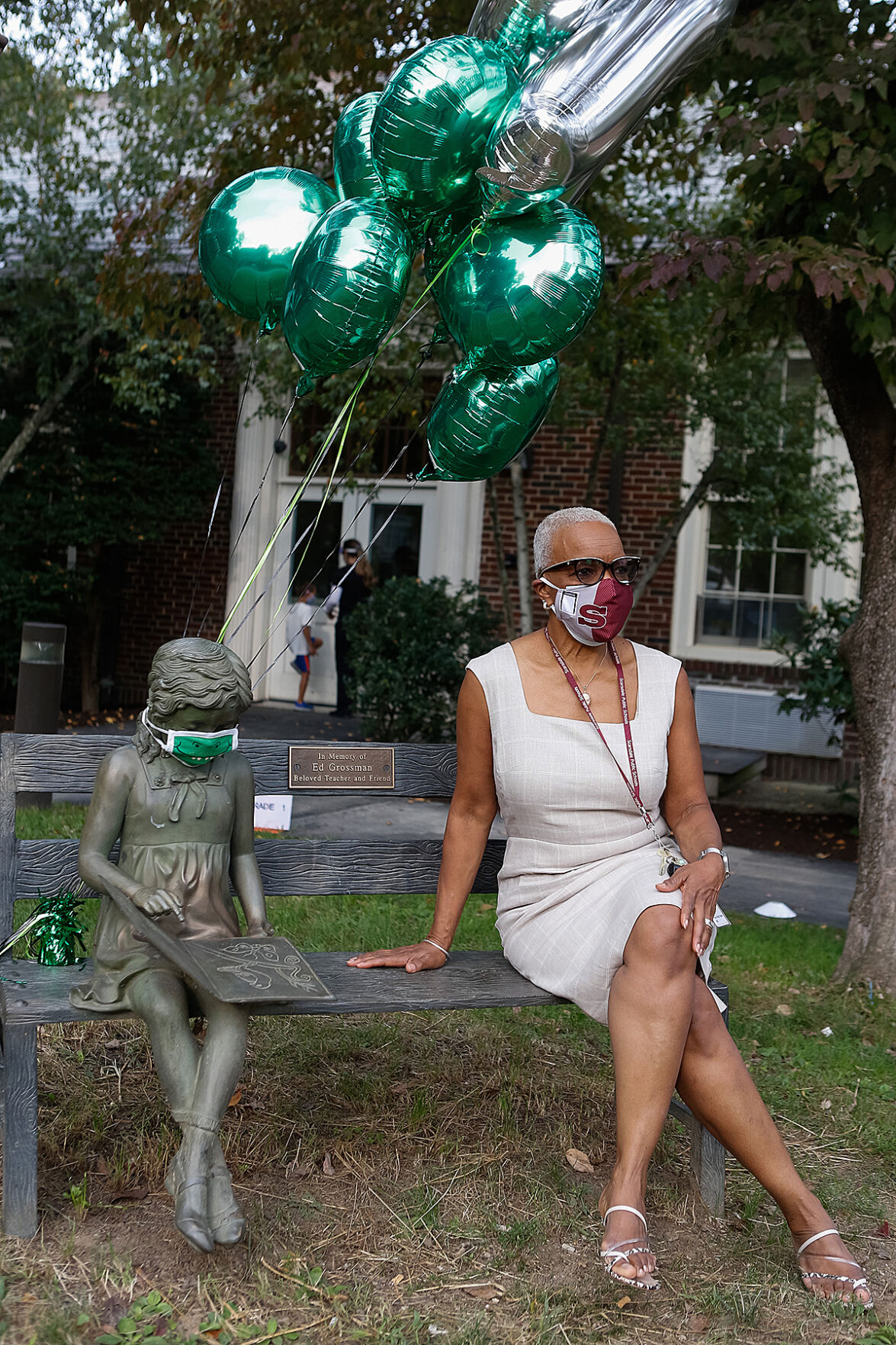 Tashia Brown’s face hurt from smiling so much Monday, Sept. 14. For the first time since March 6, the doors to Scarsdale’s middle and five elementary schools opened for students. Little did anyone know they would not return to school on March 9 due to the COVID-19 pandemic.

“The phased-in approach certainly is to acclimate students to a school that’s very new to them,” she said. “The school they left in March was not socially distanced — we could embrace them, give a high five, we weren’t wearing masks — so the phased-in approach gives an easier way for children to enter school and acclimate to the new normal.”

Last week and into this week the elementary teachers did online conferences with each individual family as a virtual meet and greet, so everyone could see each other unmasked and connect before coming to school.

The goal is to “reduce anxiety for children and families so we can get back to what we do best, which is having a school culture that is inviting and warm for children despite the masks and the social distancing,” Brown said.

On opening day, Brown wore a mask with a clear plastic section so students could see her mouth. It fogged up at times, but it did let the children see the happiness not just in her eyes, but in her smile.

“It was absolutely joyful,” Brown said. “Yesterday it was magical because finally the kids show up and they’re just the best and they rose to the occasion. They wore their masks, came in excited to be back in school and it just made it all worth it. Teachers were so excited to see the children.”

A summer of behind-the-scenes preparation all came together for the faculty and staff at Edgewood. Brown answered all questions and did her best to set everyone at ease about safety and meeting educational expectations.

After physical safety, social and emotional well-being is at the top of Brown’s priority list. With students spending the final three-plus months of last school year learning remotely and sheltering in place, and varying degrees of getting out and about and having interaction with others over the summer, Brown and her colleagues were reminded of the power of personal connections.

“Kids have to feel connected to school,” she said. “We will be getting to the business of educating students simultaneously, but those connections are really important in the two-hour and 15-minute school day … How are we connecting with them when their cohort is home? How are we bringing together the hybrid and remote students so they feel connected to the school? That’s important.

“As a school community and as a district we have to make sure we keep those connections strong and that we’re checking in with kids and with families, both individually and collectively, so people feel invested and know [others] care about them.”

Jennifer Costello has an Edgewood fifth grader, an eighth grader at private school, a sophomore and senior in high school and a college sophomore, and as a clinician who works in school districts throughout the county, she’s experiencing everything from all angles. She has different expectations for all of her kids.

At the elementary level she knows the social and emotional aspect is “huge” and believes that level has done a “great job” with teachers who are “fully dedicated.”

“The structure is critical for the little ones because I feel as a parent and as a clinician working in education that’s where they get the foundation for the skills they need in the upper grades,” Costello said. “It’s important for them to learn that, and to have that and to build upon. In high school they’re tech savvy and they know all that stuff.”

She likes the AM and PM cohort model at the elementary level because she thinks having the little ones on Zooms and Chromebooks too much isn’t good for their well-being or educational growth. “It’s critical for them to have a little bit of each,” she said.

Principal Brown is high on Costello’s list of people to praise. “A shoutout to her because she started last year after someone who was here 29 years and not only did she take that on, she took on the pandemic and she’s done a great job,” she said.

As for the rest of the setup she’s less confident.

“I probably received three texts from high school parents about frees and PE scheduled in the day,” she said. “I think the academics could have been pumped up a little more. Kids want it, whether it’s online or in-house. It’s just not enough.”

When she asked if she expects things to improve at that level, she said she is “cautiously optimistic.”

Over at the middle school Monday, Sept. 14, when half the sixth graders had their first day in their new building, there was some unexpected excitement as a fire alarm went off in the kitchen just three minutes into the school day. Though it was not a drill and as it was identified quickly as a nonemergency, the faculty and staff were able to conduct a socially distanced building evacuation. Had it been an actual threat, social distancing would not have been at the forefront, according to Assistant Superintendent Eric Rauschenbach who spoke about the incident at the board of education meeting that night. “The emergency takes precedence over that.”

“The kids were really resilient and remarkable, walked out quietly, social distanced outside for their fire drill and they did a great job,” Principal Meghan Troy said. “And we were happy with our traffic flow patterns. First day of school tends to be slower, pictures are being taken by the parents, but we were happy with how everything flowed throughout the day.”

One dad dropping off his sixth grade daughter said he has other kids in private school in a fully open model and he’s keeping an open mind to see how everything works out for all of his children. He just wants schools to remain open, he said.

“Last year was a semi-throwaway and I don’t know what this year will be. Hopefully it’s not a throwaway,” he said. “We are here in Scarsdale because it’s a fine education and hopefully they get that fine education. That only works if the teachers are here.”

The middle school typically houses about 1,200 students, but the maximum in the building on any given day during hybrid learning will be about 600. On the first day of school that number was only 200 since the seventh and eighth graders were scheduled to start later in the week. While the building felt a bit empty — even moreso since the students don’t leave their classrooms often as the teachers are coming to them — Troy felt it was a good way to get assimilated.

“They went through their full schedule and when they were leaving they were saying all the comments you would hope, like, ‘This was better than I expected,’ and ‘This was great,’” Troy said. “It was amazing and it was nice to have fewer kids in the building.”

Day 1 was about “human connection with their teachers and classmates” and getting used to doing so with masks and from 6 feet apart.

“They were still together and I think that was powerful for the kids,” Troy said, adding, “They walked out knowing their teachers care about them and want to get to know them. I think that’s what we felt was important early on. Kids left wanting to come back.”

The sixth graders had virtual orientation in the spring and a virtual Q&A forum with Troy last week, asking questions about lunch, mask breaks and physical education class, and other topics important to them.

The goal is to make the transition as smooth as possible for everyone.

“The teachers were so excited to have them back after looking at screens for so long; to have them in their presence, getting to know their names, getting to know them, all of those things I think were really important for the teachers, just to feel their energy,” Troy said. “They did put in a lot of work. Everyone the first week is always exhausted, but I think they see the value in bringing them in and they’re excited to have the kids back.”

Greenacres gets a boost

At the board of education meeting Monday, Sept. 14, Greenacres Elementary School Principal Sharon Hill gave a guided tour of the building through a slideshow. The five-year planning and construction passion project is nearly complete, with the learning commons/cafeteria and computer lab still to be finished. The rest of the renovated building was turned back over to Hill on Aug. 27 to prepare for the school year.

“Returning to our new building has been exhilarating,” she said. “It is beautiful and spectacular in many ways … We have a beautiful space we can be proud of and one that will allow us to meet the needs of our students not only now, but for many years to come.”

The oldest elementary school in the district is now spectacular with well-lit hallways and natural light illuminating its spaces, “creating the openness that is really the essence of the building,” according to Hill.

The classrooms have light, neutral, calming colors, with plenty of wall space to brighten the room with student work. New furniture that “facilitates collaborative engagement” and “promotes inviting classroom learning environments,” and chairs that have some bounce to them, were ready for students.

The music room, art room, health office and kitchen have been upgraded and with the learning commons, where lunch will eventually be served, they will be able to have assemblies and book fairs and other events without interrupting library and physical education spaces. Throughout the rooms, storage space is maximized.

The new brick used on the outside of the building matches the old brick. “It’s just incredible what has been done here just to maintain the integrity of the building in so many ways,” Hill said.

The school went from “dark” and “heavy feeling” to “huge” and “expansive” and “gorgeous,” according to Superintendent Dr. Thomas Hagerman, who lauded Hill and her team for balancing the project with their regular duties over the years.

“It strikes the absolutely right balance of keeping the tradition of Greenacres with the very beautiful, classical exterior and then the wonderful, whimsical touches inside that are so pleasing and playful for kids to be able to experience,” Hagerman said.

The perfect way to kick off the new school year.