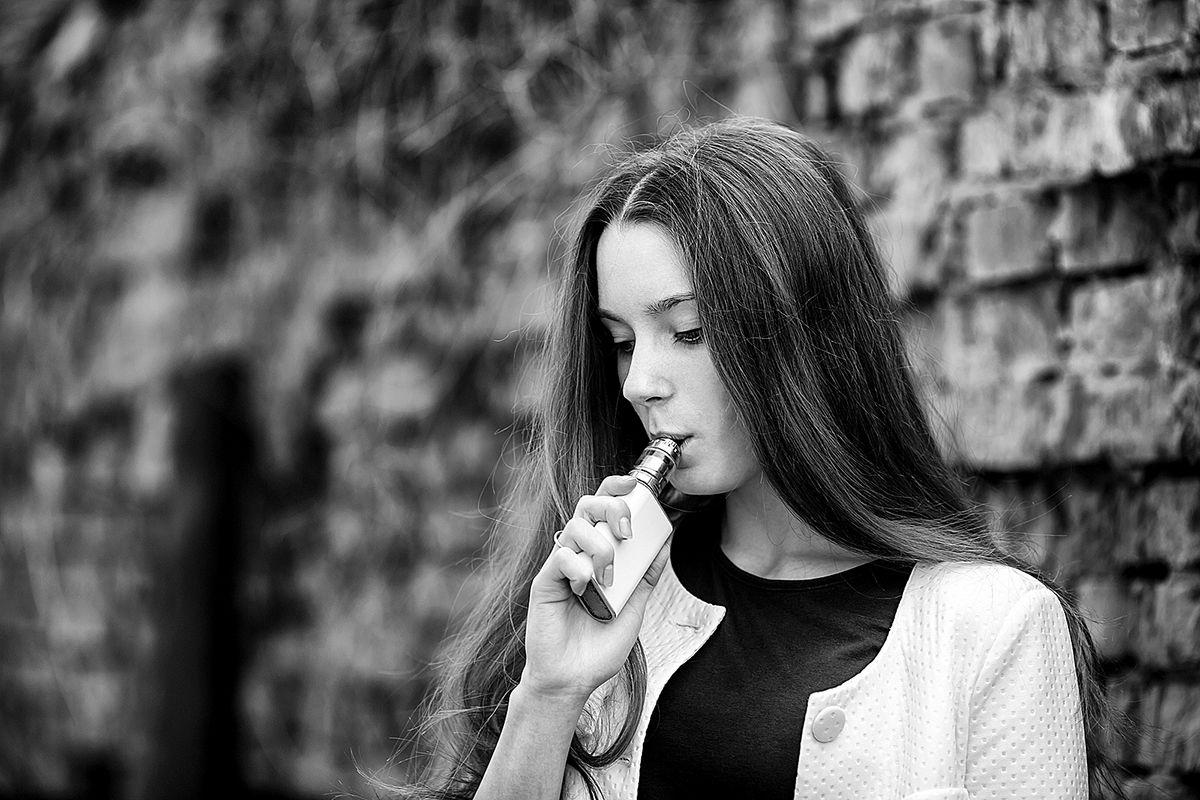 It was just before 9 a.m. and the seventh-grade class was slowly filtering into the dimly lit middle school auditorium. Almost all the seats were taken and, as you’d expect, the students were chatty. The kids slowly lowered their voices as Dr. Richard Stumacher, a pulmonologist from Northern Westchester Hospital began to speak.

“Raise your hand if you’ve ever seen anyone vaping or Juuling?,” he asked the audience of approximately 379 students.

Almost all of the seventh-graders’ hands shot up.

“Raise your hand if you think cigarettes are good for you,” he said.

The students’ hands went down.

“It’s going to take about 20 or 30 years before we really know how dangerous e-cigarettes or vapes or Juuls are,” Dr. Stumacher told the class. “And the guinea pigs are … you guys.”

Scarsdale has not been immune to the national increase in e-cigarette use, which in 2016 Vivek Murthy, the former U.S. Surgeon General, called a “major public health concern.” Murthy said that e-cigarette use among high school students grew 900% between 2011 and 2015.

“Although we continue to learn more about e-cigarettes with each passing day, we currently know enough to take action to protect our nation’s young people from being harmed by these products,” wrote Murthy in a U.S. Department of Health and Human Services report. “To prevent and reduce the use of e-cigarettes by youth and young adults, we must work together as a society.”

Scarsdale schools are attempting to do just that — educate students on the dangers of e-cigarettes both inside and outside of the classroom.

According to data from the United States Food and Drug Administration, e-cigarette use by high school students increased 78%, from 11.7% to 20.8% between 2017 and 2018. National Youth Tobacco Survey study authors hypothesized that the increase in e-cigarette use was most likely due to the popularity of the Juul products and the accompanying “high nicotine content, appealing flavors and the ability to be easily concealed and used discreetly.”

“I think regionally, nationally we’ve seen an increase in vaping [among teenagers], adolescents and even in some cases pre-adolescents,” said Scarsdale’s Director of Special Education and Student Services Eric Rauschenbach. “Scarsdale is no different.”

At the board of education meeting Oct. 21, school board president Scott Silberfein said the board had heard about fire alarms being triggered at the high school “presumably related to vaping.”

According to Scarsdale’s Director of Safety, Security and Emergency Management Michael Spedaliere, areas with high volume alarm activations are being monitored by video cameras and aides are periodically checking bathrooms.

“We do know that vaping does happen,” said Superintendent Thomas Hagerman. “When it happens, it happens during class time … because presumably most kids and most teachers are busy during those times. So if you’re trying to get away with something like that, you are [able to].”

School board member Karen Ceske said discussions began sometime last year about possibly installing vape detectors in the school bathrooms. Spedaliere said the district had concerns about installing the detectors. Not only were the detectors expensive, but the minimal time between the vape detector being activated and the fire alarm activating made the usefulness of detectors questionable.

“One of the issues is that the vape detector … would send a text message to an administrator. However, if the fire alarm is going off, then everyone is vacating that spot and that’s sort of deemed useless,” said Assistant Superintendent for Business Stuart Mattey.

Hagerman said the more proactive approach to combat vaping beyond monitoring and catching kids in the act is to educate students about the chemicals associated with vaping.

“That’s an area that we need to continue to work on and really have kids understand how these [chemicals] are incredibly dangerous and life threatening,” said Hagerman. “We’re committed to doing both sides of that work.”

Stumacher focused his presentation heavily on statistics and scientific studies, even delving into the economic hold that Juul has on the e-cigarette market.

“I have no doubt in my mind that someone, if they haven’t already offered you a Juul, is going to offer you a Juul sometime in the next couple of years and you need to be able to say no,” said Stumacher. “If you choose to see a Juul the same way you see a cigarette, it’ll be really easy.”

The main concerns regarding e-cigarettes with youth is the effect that nicotine has on the developing brain. According to Stumacher, nicotine disrupts development of the prefrontal cortex, which controls decision-making.

“[In] July 2017 I had never heard the word Juul before,” said Scarsdale High School Assistant Principal Christopher Griffin. “Over the past two years it has exploded.”

Beyond the regular assemblies and classroom curricula, Griffin has been spearheading an effort at the high school to stop nicotine addiction by collaborating with an eight-week group nicotine cessation program offered by Caron, an addiction treatment center.

Once a week after school, a representative from Caron will meet with students to talk through their addictions.

“We’re trying to reach out to kids who we know have used and have struggled with this and try to get them on board to get into this group,” said Griffin.

Any student is allowed to join the program, which begins on Oct. 29 and meets from 3 to 4 p.m.

“This is not something that goes on a school record. This is the school trying to provide a program to help kids get healthy,” said Griffin.