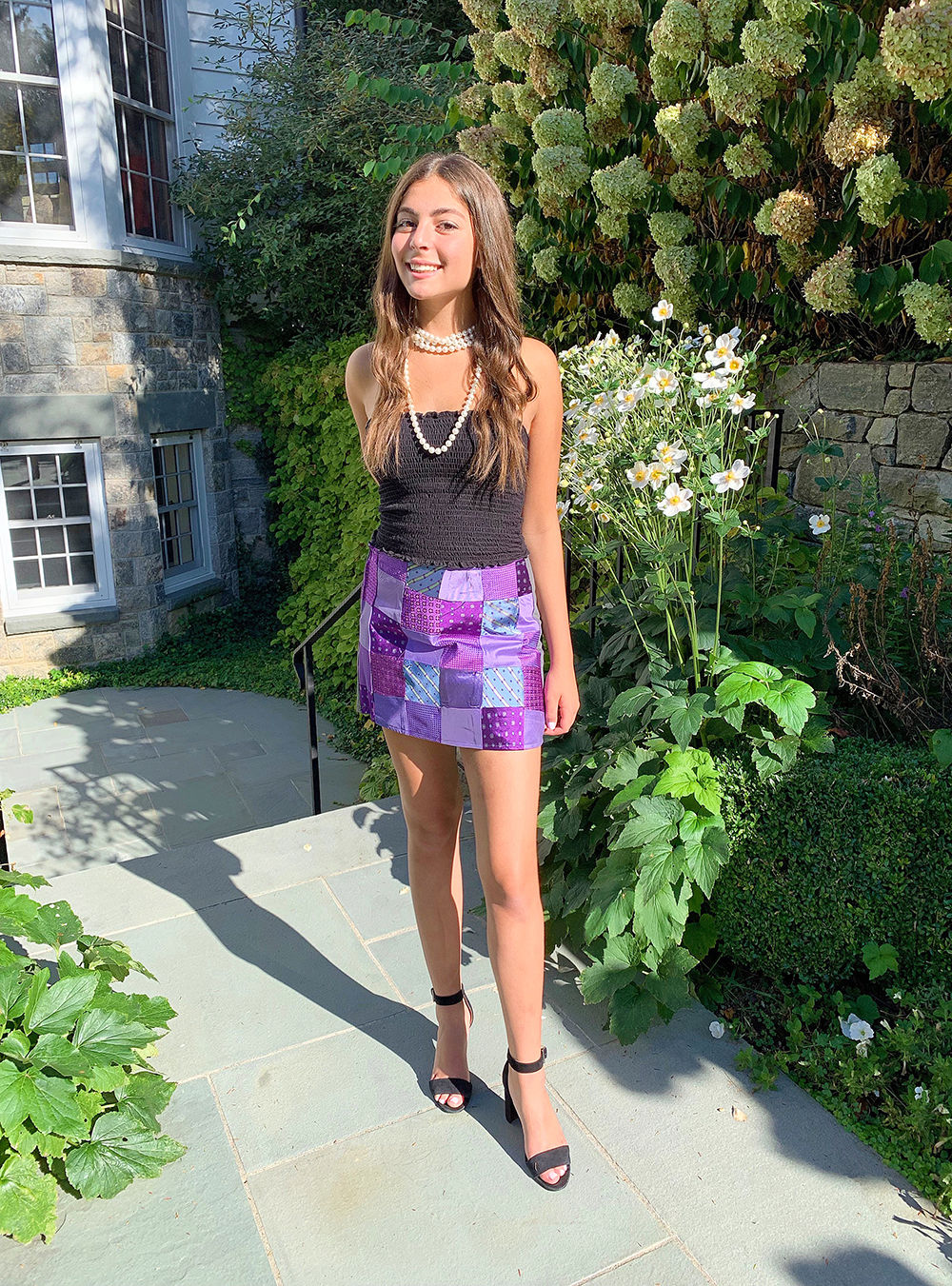 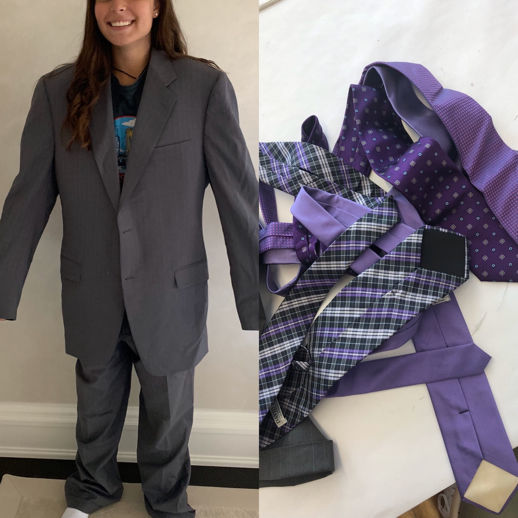 The old suit and ties from Jennifer Kahn’s father, who was going to throw them away. 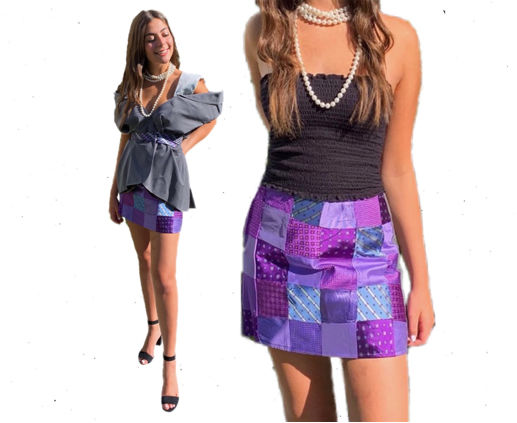 Jennifer Kahn sewed old ties together to make a skirt and reconstructed a suit into a trendy off-the-shoulder jacket.

A cutting-edge fashion show is coming to the Scarsdale High School auditorium Jan. 24 from 3 to 4 p.m. But the teens strutting the catwalk won’t be modeling the types of ensembles our kids usually covet — say, the latest from a village boutique or something from the juniors’ department at Bloomie’s. Instead they’ll be showing off unique, handmade garments created from old clothes. Attendees may see a checkerboard skirt made from ties, for instance, or a chic blouse crafted from a men’s suit jacket.

It’s the ultimate intersection of creativity and practicality, and, if one young entrepreneur has her wish, it will also be the wave of the future.

“Hopefully, we can reduce consumerism and waste in the fashion industry,” said 17-year-old Jennifer Kahn, the founder of Up2D8, the sustainable-fashion school club behind the outfits and the show. “Clothing currently is being produced and discarded in much shorter time frames than it used to be, with new designs showing up daily on social media. In addition to quicker trends, people post themselves on social media wearing an outfit, and then don’t want to wear that outfit because it’s already been seen, causing them to discard clothing that has barely been worn.”

This so-called fast fashion wreaks havoc on the ecosystem. “The apparel industry is one of the largest polluters in the world after the oil industry,” Kahn explained. “The emission of greenhouse gases due to the production of clothing is a huge contributor to climate change, especially due to the types of fabrics that are being used. For example, synthetic fibers such as polyester are causing harm to the environment because they are not biodegradable and they sit in landfills. We hope that in the future the fashion industry will start using more organic fabrics.”

And, of course, there’s always Up2D8’s strategy — reinventing old garments and turning them into fashion-forward pieces. Kahn first came up with the idea after learning about sustainability in school, she said. And she didn’t need to look far for sartorial inspiration: “My father owns a fashion company that’s about 130 years old, one of the oldest in the country,” she explained. “It’s called Kahn Lucas and it was started by my great-great grandfather. They make girls’ dresses.”

Like her forebears, Kahn has a flair for clothing design. “I started taking classes at the Fashion Institute of Technology in ninth grade for eight hours every Saturday, as well as during my ninth- and tenth-grade summers,” she said. Up2D8, which she founded about a year ago, was a natural outgrowth of these experiences. “I combined my design interest with my desire to address waste in the fashion industry and how it ultimately affects climate change,” she said. “I wanted to spread awareness about this problem and also enable club members to use their design skills at the same time as they’re helping the environment.”

Recruiting members for Up2D8 “wasn’t very difficult,” Kahn said. “There are a bunch of people in school that are interested in art and a couple of my friends are also interested in fashion design and helping the environment.” Currently, the club has about a dozen members, all female, though boys are welcome to join.

The garments Up2D8 works with come from homes all over town. “People bring them to school — we have had clothing drives and we have posters all over,” Kahn said. “We’ll get anything from sweatshirts to jeans and suits.” T-shirts, she said, are the most frequently donated items of clothing.

After surveying the haul, Kahn and her fellow club members get to work. The items created “depend on the students,” she explained. “Whatever they would like to create, they first sketch it on a piece of paper, and then we figure out how to make or sew it. And then we may sew parts of different garments together or add some trim to embellish them.” Members design the clothing on mannequins, and then go through fittings to ensure the garment will flatter their own figures.

Up2D8 only meets for an hour on Mondays after school, “but I also have a sewing machine at my house,” Kahn said. “So if people would like to work after hours, I allow them to come over to my house and I teach them some simple sewing techniques, because a lot of them aren’t as experienced in sewing.”

Kahn understands that to be successful, sustainable clothing needs to be chic. To keep in touch with the trends, “I do research,” she said. “I am constantly checking vogue.com and the various fashion magazines. Another way I’m updated is through Instagram, because it’s very visual and great for designers to showcase their designs. It has inspired many different garment ideas that we ended up creating in the club.”

In all, Up2D8 has created some 50 pieces of clothing, about 30 of which will be modeled at the fashion show. It will mark a high point for the club members and especially for Kahn, who hopes to study fashion design in a liberal arts school. For now, though, she has a different goal in mind: “In the future, I hope to create my prom dress,” she said.

Tickets are $5; proceeds will be donated to Kids Kloset, a program that provides underserved Westchester County children with donated clothing and related items.