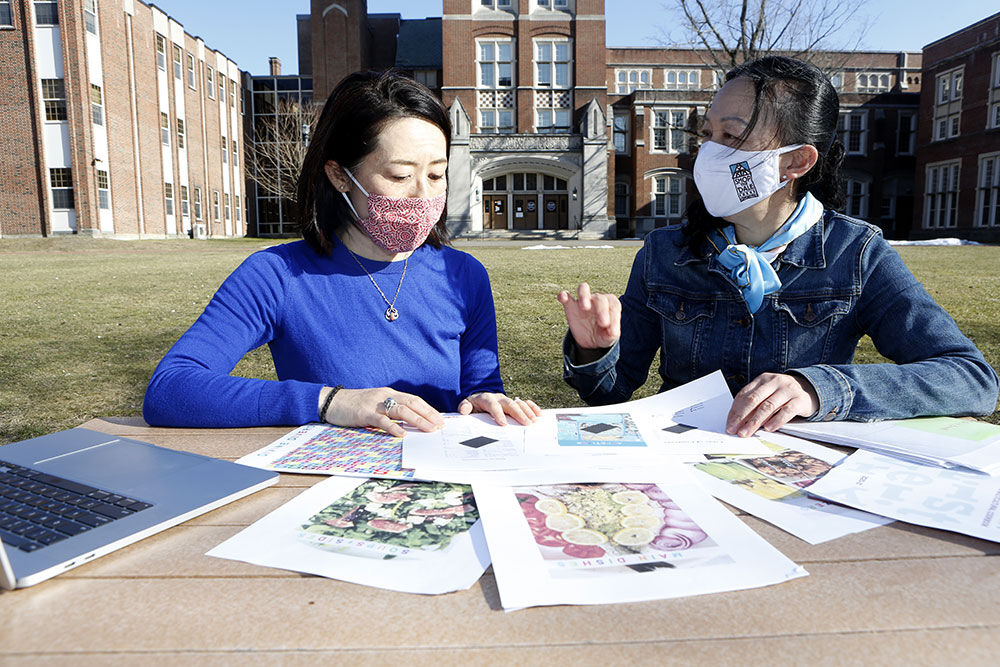 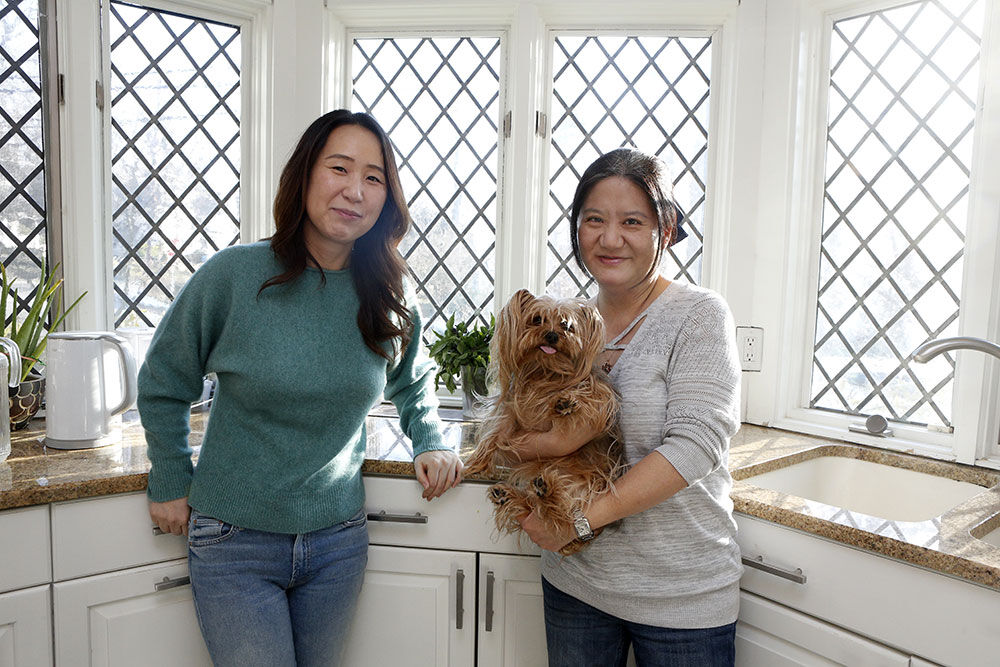 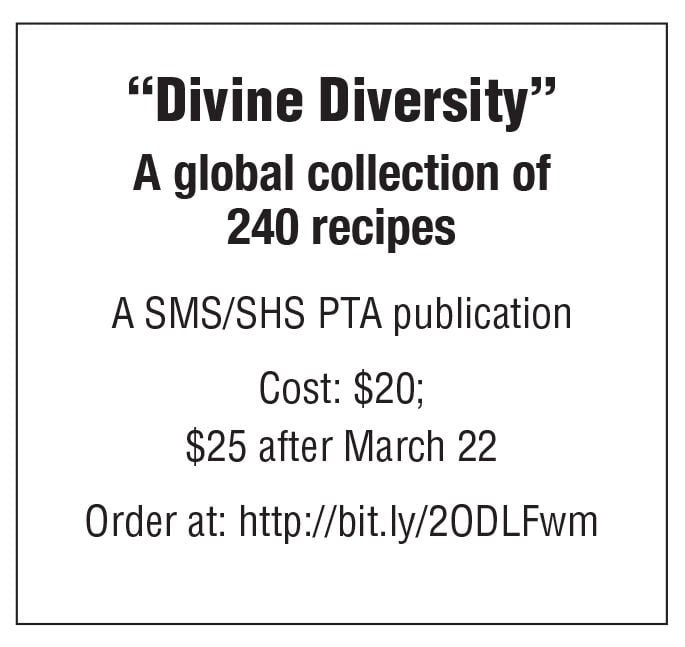 The annual Thanksgiving feast of the Scarsdale Middle School and Scarsdale High School PTA multicultural committees is a treasured tradition.

“Parents bring in their own dishes and the committees order a turkey, and we invite parents, principals, advisors and teachers to join us,” said Mariko Takeda, who along with Julie Zhu co-chairs the SHS PTA Multicultural Committee. Last November, sadly but not surprisingly, the beloved gathering was canceled due to the pandemic health crisis. Longing to team up for something special instead of that large gathering, the committees brainstormed and arrived at a tasteful solution: they decided to create a cookbook that celebrates the many cultures within both schools.

The result is “Divine Diversity,” an eclectic collection of more than 240 recipes collected from parents of children in the middle and high schools. “We have a lot of Chinese, Japanese and Thai recipes, plus lots of recipes from Thailand, Poland, France and Germany, and some African food as well,” said Jessy Choi, who co-chairs the SMS Multicultural PTA Committee along with Cindy Yau. Beyond contributing recipes for their favorite dishes, parents also dished on their recipes’ provenance: “People submitted a little anecdote with the recipes,” said Yau. “There are notes about how the recipe has been in their family for a long time and everyone loves it — people do share a little bit of the stories.”

Creating the cookbook, which is the first one jointly published by the middle school and high school, as well as the first cookbook from the high school ever, was a labor of love. For the committees’ co-chairs, it involved plenty of behind-the-scenes research.

“Julie and I spent several months studying which company we could work with, and what kind of book we would like to create, under what kind of theme,” Takeda recalled. “We would just kind of brainstorm while we were walking on the high school track together.”

Eventually, they settled on working with Morris Cookbooks, the No. 1 cookbook publisher in the U.S.

“We had several candidates,” said Takeda, including companies that had previously compiled cookbooks for Fox Meadow and Edgewood elementary schools.

Morris, however, offered an easy-to-use online recipe submission platform for would-be contributors. “Instead of us collecting all the recipes, because of the pandemic we thought this was exactly what we wanted,” Takeda explained.

Starting in mid-November, the committees spread the word through school e-mails that they were seeking recipes. At first, however, the response was less enthusiastic than they had hoped for.

“At the beginning, when we first made the announcement, we weren’t getting as many recipes as we wanted to — 80, not even a hundred,” Yau recalled. “We were worried that we wouldn’t be collecting enough recipes, but after the Christmas break, there were more, and then all of a sudden the recipes were pouring in.”

Those who purchase the cookbook ($20; $25 after March 22), which is available through the high school’s PTA pre-order link (http://bit.ly/2ODLFwm), will find a wealth of material within its two covers, which were artfully designed by Scarsdale resident Beth Lambert.

“The cookbook is divided into sections: we have an appetizer section, a section for comfort food, main dishes and desserts,” said Yau. “We also have a section called ‘Street Food.’ I think that’s the section I like the most, because we represent the different street foods people get in their home countries. There’s also a section of holiday food — what people eat for holidays such as Christmas and the Lunar New Year.”

Participants are already whetting their appetites. “I love the idea of contributing and collecting diverse recipes from multiple cultures all within Scarsdale in one book,” said Eunjee Hong, a Korean-American Greenacres resident with children in the seventh and 10th grades. She shared a recipe for a snack food called Gimbap (Korean rice rolls) and can’t wait to see what new dishes the cookbook will add to her family’s repertoire. “I hope on days when I (or my husband) need some inspiration for what to cook, I can rely on this wonderful resource of tried-and-true recipes from members within this diverse community,” she said.

Heathcote Korean-American resident Joanne Im, whose children are in the fourth, seventh and 10th grades, volunteered four recipes a family would eat as part of a traditional Korean meal: a soup, a meat dish, a vegetable dish and a tofu side.

“I already purchased a copy of the cookbook, and I am looking forward to it,” Im said. “We cook different cuisines in the house, and some of my children prefer foods that are not Korean. I’m very curious what other families have chosen, and to try out different recipes from other countries and ethnic backgrounds.”

“Divine Diversity” even contains recipes from a Wall Street Journalbestselling cookbook author, Toby Amidor, a Quaker Ridge resident whose two younger children are in eighth and 10th grades. Her contributions all nod to her Eastern European, Israeli and all-American roots: Chicken Plov, a Russian dish of chicken and rice; hummus; and her custom Mama’s Berry Smoothie.

“We are all very lucky in Scarsdale to have a wide array of individuals who have lived around the world and have the opportunity to share recipes from a variety of food cultures,” Amidor said.

It is this spirit of sharing that the committee co-chairs hope to spread through the cookbook.

“I hope the reader will not only enjoy trying to cook a recipe, but just enjoy flipping the pages and feeling like you’re talking with the person, and knowing a little more about the family, and then people will feel the togetherness even though we’re not meeting in person,” said Takeda.

Added Zhu, who thanks the PTA presidents of both schools for their support, “I’m hoping this cookbook will become a bridge. Through breaking bread together, it will bring our community ever closer together.”

Yau thinks “Divine Diversity”will become a keepsake of an unusual time. “Maybe in the future, we can make a second or third edition,” she mused. “This will hopefully be the start of an ongoing tradition.”

And why not? As Choi observed, “Cooking and sharing food is a wonderful way we live our lives.”