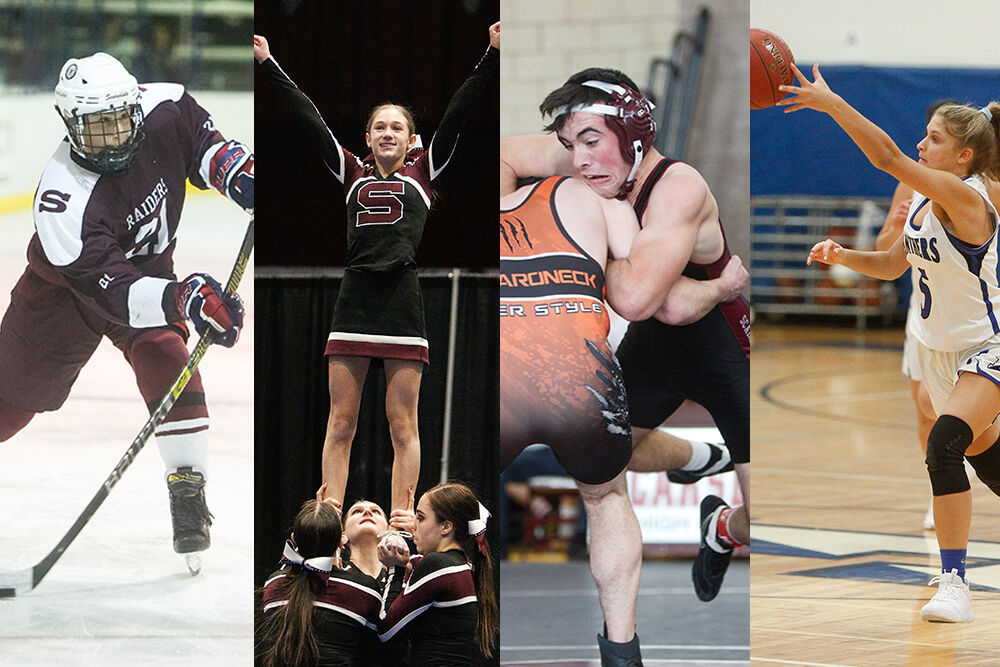 The Scarsdale and Edgemont schools boards will vote on whether or not to give the go-ahead for high-risk sports. 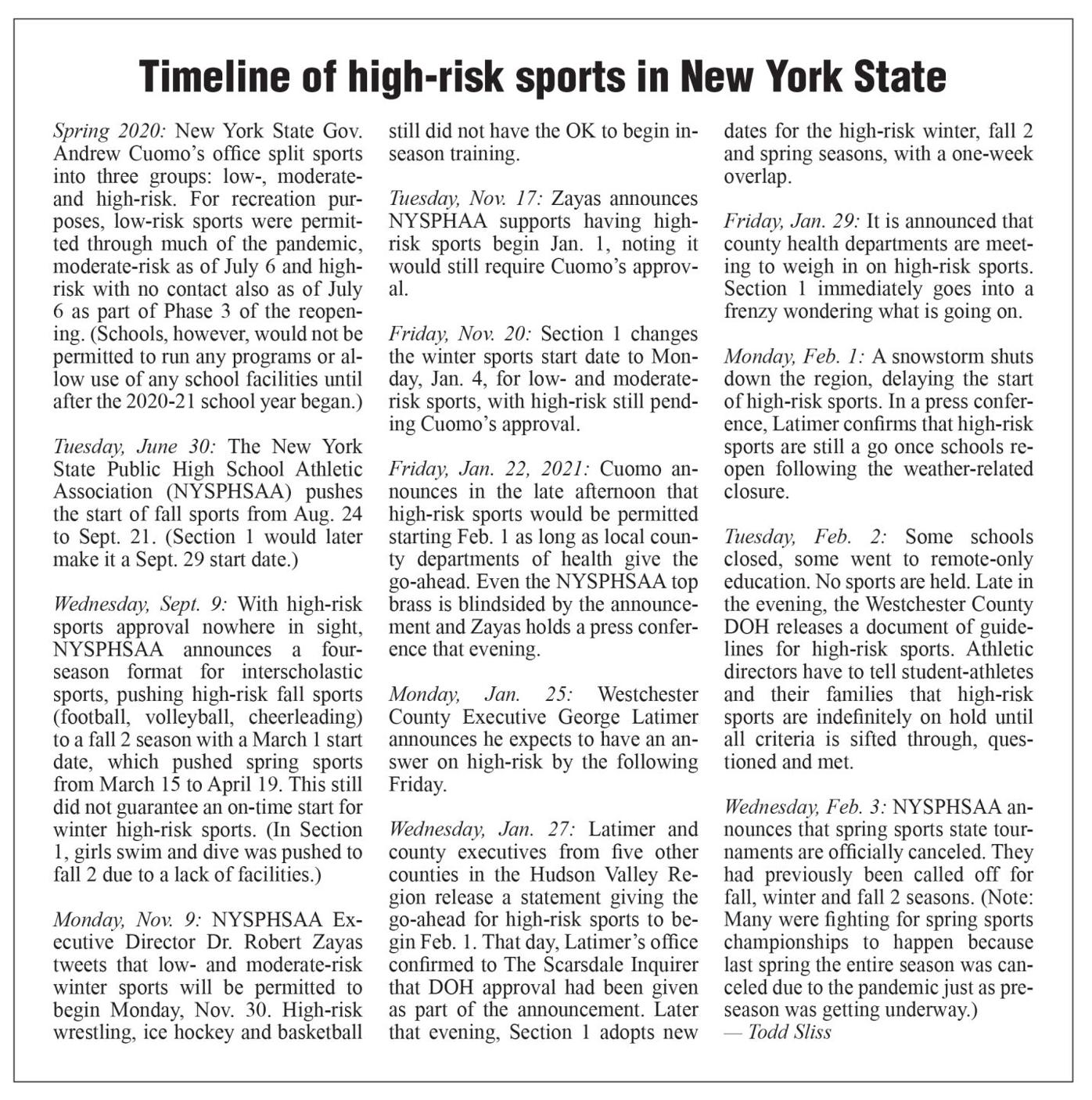 If it hadn’t been for the snowstorm that cost districts two days of in-person school on Monday and Tuesday, Feb. 1 and 2, some Section 1 schools would have started their official full-contact high-risk winter sports tryouts and practices. But all that would have stopped on Wednesday as the Westchester County Department of Health released its guidelines for high-risk sports late Tuesday evening, with several curveballs that districts would have to deal with before getting started.

It was another unexpected roadblock for schools and administrators to overcome in a short time.

After the six county executives from the Hudson Valley region, including and beyond Section 1, released a statement Wednesday, Jan. 27, giving the go-ahead for high-risk sports to begin Feb. 1, Section 1 changed the start and end dates for the high-risk winter, fall 2 and spring seasons, allowing for a one-week overlap.

On Friday, Jan. 29, the Westchester County DOH met to discuss high-risk sports, which led many to believe that high-risk sports were not permitted. On Monday, Feb. 1, during the snowstorm, Westchester County Executive George Latimer said in a press conference that sports are good to go, which is why no one expected the process to again be halted by the DOH guidelines Tuesday.

“There’s no delay,” Latimer said in response to an Inquirer reporter Monday. “The opening day was always going to be Monday, Feb. 1, which is today and because of snow that’s the delay from there being any practicing going on today and perhaps tomorrow as well. There was a clarification of what the protocol was expected to be and when the county executives made our announcement I think on Wednesday of last week that was the ‘go’ decision.”

Latimer confirmed the DOH “professionals” met the previous Friday “and went over certain types of issues that represent the implementation of how you conduct the sport. The implementation are guidelines in how you will open it up. It’s not a question as to whether you will or won’t open it up. The decision was made. I made that decision in concert with the county executives.”

He did not give any indication that strict guidelines were forthcoming and would effectively halt every school in the county.

On Wednesday, with schools having to tell student-athletes either there would be no practices that day or they would stick with the nonmandatory no-contact practices, the ADs got to work to meet the new guidelines and Latimer stood his ground in his latest press conference saying, “… we said we would follow with advisory guidance that would help shape how these sports are to be administered and implemented.”

“These requirements in some cases are different than what we’ve had before,” he said. “Because we’re in a pandemic. And when you’re in a pandemic you have to take extra steps, but you also have to look at what is a requirement, versus what is recommended and that’s very important.”

Among the key points in the DOH guidance:

1) Students and parents need to sign a COVID code of conduct.

2) Students and parents need to sign an “informed consent” form centered around the risks of COVID-19.

3) In order for a school to participate in high-risk sports, either the superintendent or the board of education needs to give the go-ahead.

4) For wrestling, schools must consider an American Academy of Pediatrics statement that masks may be a choking hazard.

5) Any student-athlete who had COVID-19 needs to be cleared by a cardiologist.

6) Physicals needed to be from the academic school year (that was changed to align with New York State rules of the past 12-18 months) as it would have been the biggest hurdle for families to overcome).

After spending at least half their day in meetings, including a Section 1 athletic directors meeting, ADs Ray Pappalardi of Scarsdale and Anthony DeRosa of Scarsdale were able to give an update on their progress Thursday evening, Feb. 4.

Both districts will vote on resolutions regarding high-risk sports next week at their regularly scheduled board of education meetings, Monday, Feb. 8, for Scarsdale, Tuesday, Feb. 9, for Edgemont. Pappalardi said Scarsdale would consider each sport separately, while DeRosa was unsure of how the resolution, discussion and vote would take place.

The most pressing sports are the winter sports of basketball, wrestling, ice hockey and, for Scarsdale, cheerleading. The other high-risk sports are in fall 2 (volleyball, football) and spring (boys lacrosse) and don’t officially begin until March 8.

Wrestling remains the sport most up in the air and the DOH guidance doesn’t likely help that sport’s case to begin. The state guidance that masks must be worn as long as they can be tolerated and AAP guidance that they are a potential choking hazard are conflicting, especially as last fall Section 1 member schools agreed that athletes should be masked at all times.

“I definitely think that the AAP guidance says one thing and New York State guidance says another thing,” DeRosa said. “People have different opinions on it. A lot of people in the wrestling world, like coaches and people who are familiar with the sport, they feel that the loop around masks everybody wears around the ears is far less of a choking hazard than the headgear with the chinstrap that would hold the mask in place. That’s been a concern for a while and it’s something the coaches and officials are on the lookout for under normal conditions.”

Pappalardi said some of the high-risk winter sports could begin practicing officially at Scarsdale as early as Tuesday, Feb. 9, but nothing can happen until all of the forms are signed and returned.

Pappalardi has been frustrated by the timeline of events since Cuomo’s surprise Jan. 22 announcement that high-risk sports could begin Feb. 1 with county DOH approval. Ever since last week, Pappalardi has been constantly and anxiously checking his emails and was surprised to receive the strict DOH document.

“If I’m able to sit back and reflect, we’re OK,” he said. “Could we be in a better place? Absolutely, if people were more organized, but you can’t expect that when the decisions have been politically motivated.”

The big question now that schools are losing this week and into next week is whether Section 1 would change the dates to reflect the lost time for winter high-risk, which is currently slated to end March 14. It doesn’t appear that will happen.

“Time is ticking, but we’ll do the best we can,” Pappalardi said. “We’ve taken the position that we’ll offer the most program that we’re allowed to offer for as many kids as possible.”

DeRosa noted that all districts are “in the same place” trying to get their athletes going as quickly as possible. He knew last week Edgemont would not be ready to go early this week, so if he can get things going soon after the BOE approves it won’t be that much time lost.

“These additional steps were well thought out by the Department of Health,” DeRosa said. “They felt they were necessary steps and our job is to take whatever guidance is given to us and implement it. Whatever is decided we want to do what’s best for the athletes and in the best interest of the safety and well-being of the athletes.”

DeRosa also said the timeline has been tough with so many cooks in the kitchen from the state level on down.

“There was a lot that needed to happen before we could get off the ground,” DeRosa said. “What I’ve done since the governor’s statement and decision was I worked with our wrestling, basketball and ice hockey coaches to draft plans as detailed as we can get them trying to go over every little thing we could think of, put every little protocol in place to try and make running the sport as safe as we can given all the guidance. Those plans are in place and we’re ready to execute them.”

He added, “I’m hopeful we can get everything off the ground in any way, shape or form and be able to give the kids some kind of experience.”