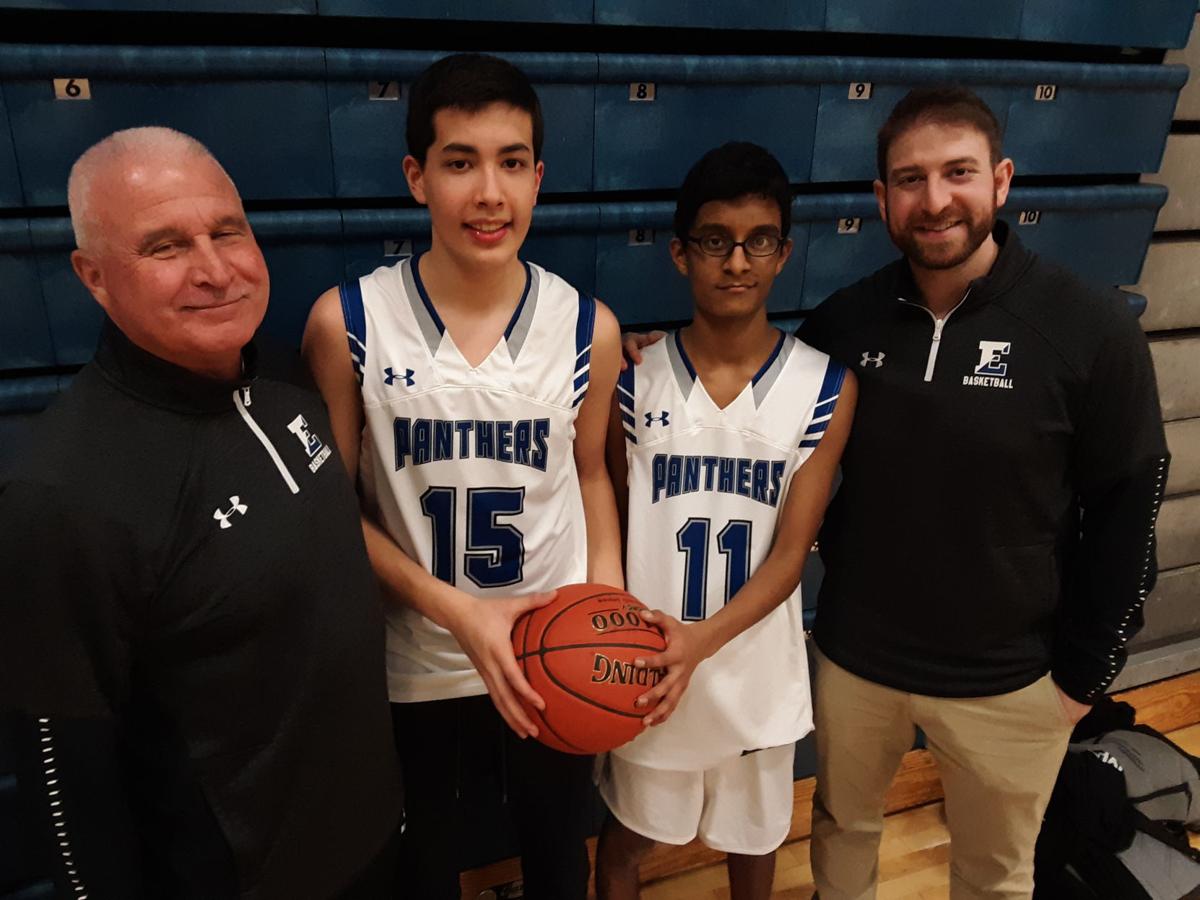 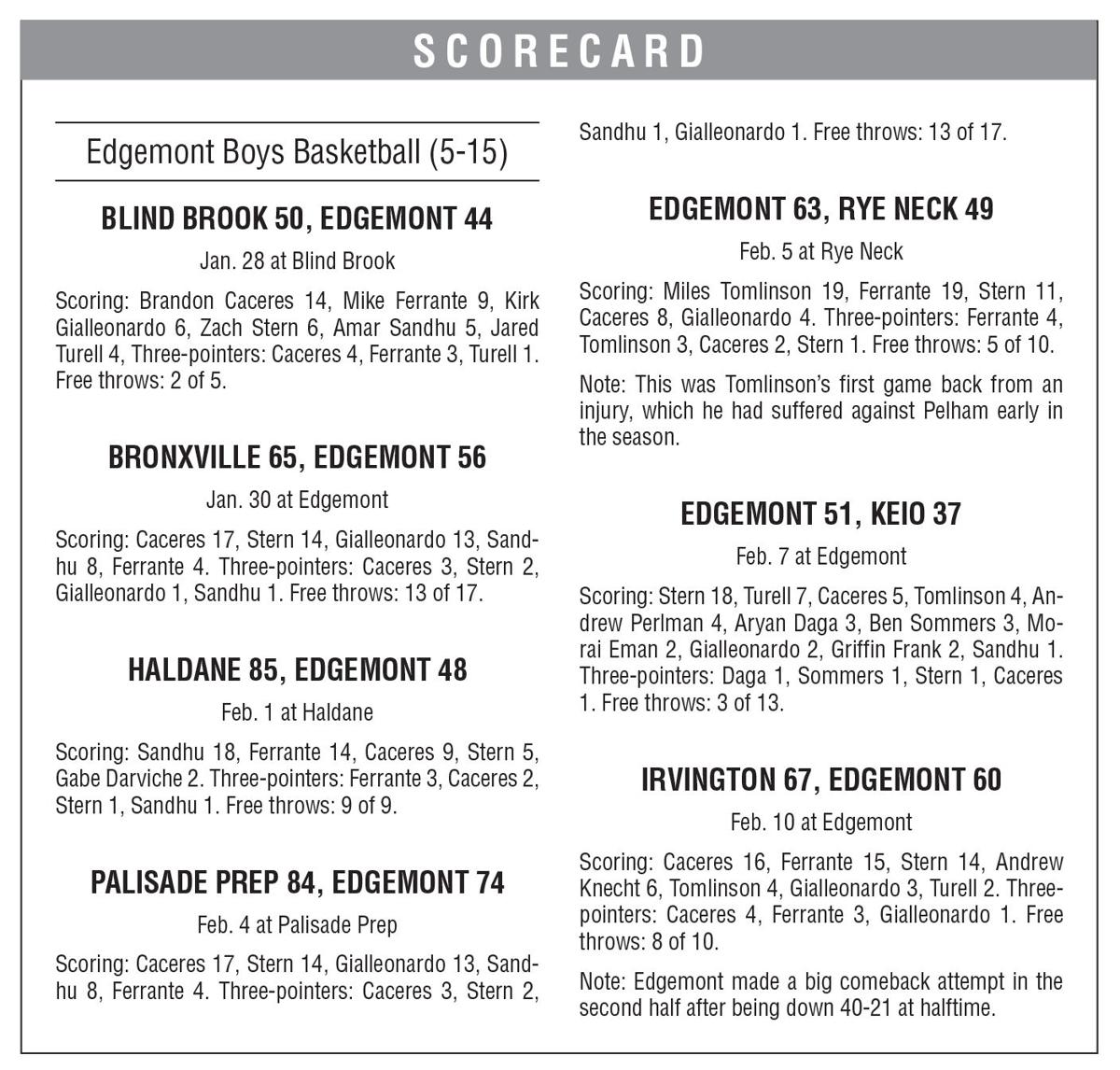 In a season full of more downs than the 5-15 Edgemont boys basketball team would like to recall, the most memorable moment came from the unlikeliest of Panthers.

Aryan Daga, the team’s manager, suited up for senior night as a reward from coach Craig Moses for Daga’s dedication in practices and doing the book at games. The senior spent a little time on the court early in the game, but was unable to connect on several scoring chances. With the game well in hand later on, it was a different story.

When Daga drained a three-pointer in the fourth quarter against Keio last Friday night, the Pantherdome crowd and home bench burst with excitement.

The crowd started cheering, “MVP! MVP” and when Moses took Daga out of the game, he received a combination of high fives, hugs, chest bumps and pounds, not to mention smiles a mile wide, from his teammates.

“It felt great to know my friends were watching,” Daga said of the crowd’s reaction. “It was amazing I have this type of support. It’s something I’d always wanted. To experience it was great.”

No. 11, wearing an Edgemont jersey for the first time, was suddenly the man of the hour.

“I was thrilled to get him in the jersey,” Moses said. “He’s worked hard all year and our manager is expected to come to every practice and game. He’s been there with us since Day 1, hasn’t missed a thing. I constantly tell him that part of being a manager is to learn and improve and better understand the team. He did that. He showed me he was focused, that he was watching all the plays. Even when not prompted he hopped in every sprint with the team. He’s that type of kid, so it was great to have him have a shining moment tonight.”

Moses said he would keep Daga in uniform the rest of the season, though admitted his minutes would be “sporadic.”

Daga moved to Edgemont from Singapore two years ago. His friend invited him to play a pickup game when he was in eighth grade and he fell in love with the game.

“Ever since then I started working hard,” Daga said. “The more I wanted it the better I got at it and tonight I got an opportunity.”

Funny enough, stepping on the court last Friday was Daga’s first ever as the member of any organized basketball team.

“I have been cut from a lot of teams,” he said. “I got cut this year and Coach offered me the position to be manager and practice player. I agreed that the opportunity to come play with the team in practice, come to all the games and see what goes on and get the chance on senior night and score was obviously a great experience.”

Never did he expect to suit up for Edgemont.

The team was welcoming to Daga from the beginning, even giving him advice to help him with his game, and all the hard work paid off.

Daga already got accepted to Syracuse academically, so perhaps now the basketball coaches will take notice, too.

With the win over Keio, Edgemont improved to 5-14 with one game left against Irvington Monday night, which the team lost 67-60, unable to come back from a 40-21 halftime deficit.

Momentum has been something the Panthers have struggled to gain, but with the wins slowly coming they were hopeful of qualifying for sectionals, which wasn’t announced until Thursday.

“It’s been pretty fun lately,” junior Kirk Gialleonardo said. “I feel like the first half of our schedule was pretty hard, but I feel like we’ve been coming together, practicing harder and once we actually knew we still had a shot at the playoffs it motivated us more to want to win.

“The tougher games were usually because of height and I feel like it helped us a lot coming into these games because these teams are worse.”

Edgemont started the season without point guard Chase Feng, who returned to the court recently, and Miles Tomlinson, who missed all of last year due to an ACL tear, started off well, but got hurt and was out most of this season, too, only returning last week. Sam Feldman has also been out.

“He’s obviously a leader on our team, one of our three captains and it’s been great having him back,” Gialleonardo said of Tomlinson. “We’ve also been missing our starting point guard, Chase, who tore his ACL at the beginning of the season and Sam Feldman we’ve been missing, too. Both are juniors and they’ll be back next year.”

Tomlinson made an immediate impact in his first game back against Rye Neck on Feb. 5. He scored 19 and grabbed 16 rebounds.

“The boost of just having him back in the lineup, the energy he provides really is hard to quantify,” Moses said. “In addition to the numbers, he means a lot to this team with his leadership. Athletically tonight [against Keio] you could see him blocking shots all over the place and getting rebounds. He leaves his heart on the court and that’s all I can ask.”

Moses said Tomlinson is “selfless” on the court. “If he can score he will, but he’s a very willing passer and he’s ready to set his teammates up,” Moses said. “They love playing with him. It was a lift to the team with him back in the lineup.”

While the Panthers will greatly miss senior starters Zach Stern and Amar Sandhu and would-be starter Tomlinson, the team will have Gialleonardo, Mike Ferrante and Brandon Caceres back in the starting lineup next winter.

In late January and into February, the Panthers were struggling on and off and after a competitive 50-44 loss to Blind Brook on Jan. 28, Caceres noted the team needed “to communicate more,” adding, “We need to get more shots up, drive a little more, get to the free throw line more.”

The defensive improvement was showing even back then in January as the team had a week off between games to refocus.

“We did defensive plays, worked on our defense,” Caceres said. “Before we weren’t as good at defense as a team. I think we did better today. We were talking more on defense.”

Not having played in a week had its pros and cons. The con was not being in that late-season rhythm you want to develop in competitive situations.

“I think we improve every single game,” Jared Turell said after the Blind Brook road game. “There are some times where being aggressive one way vs. the other can be the difference. We lost by six this time and I think we lost by six last time. I think if we played them a third time we could win by six or 12 or it could go either way. They’re a good team.”

Edgemont was focused on being there for each other on and off the court.

“I think we’ve got to keep having fun together and not getting too frustrated,” Turell said. “We have a lot of kids with a lot of charisma that work really hard. We have a good attitude toward the game. It’s just once we gel we can go on a lot of streaks, make a lot of stops defensively. We’re just not there yet.”

Moses felt the Blind Brook game was “a step in the right direction.”

“Tonight we did a great job coming together as a team,” Moses said. “I told them in the locker room they did a great job whether they were on the floor or on the bench. Everyone was engaged, everyone was talking, everyone was picking each other up. That’s a great first step and when we do that our energy is much better.

“Brandon has been on a strong scoring tear lately and he knows he has a green light to keep that up. Michael is young, but he’s doing a nice job of putting the ball in the net for us. If we can continue to get consistency from some guys like Zach, ultimately I think the defense will hopefully fuel some easier points on offense for us.”

For the last month as Edgemont made a playoff push, defense remained the focus.

“Our offense has improved because we’ve been giving ourselves much easier opportunities by playing better team defense,” Moses said. “We’ve been doing a better job helping in the paint, rotating and communicating, which is something we’ve been talking about all year. I believe it’s finally starting to click.”