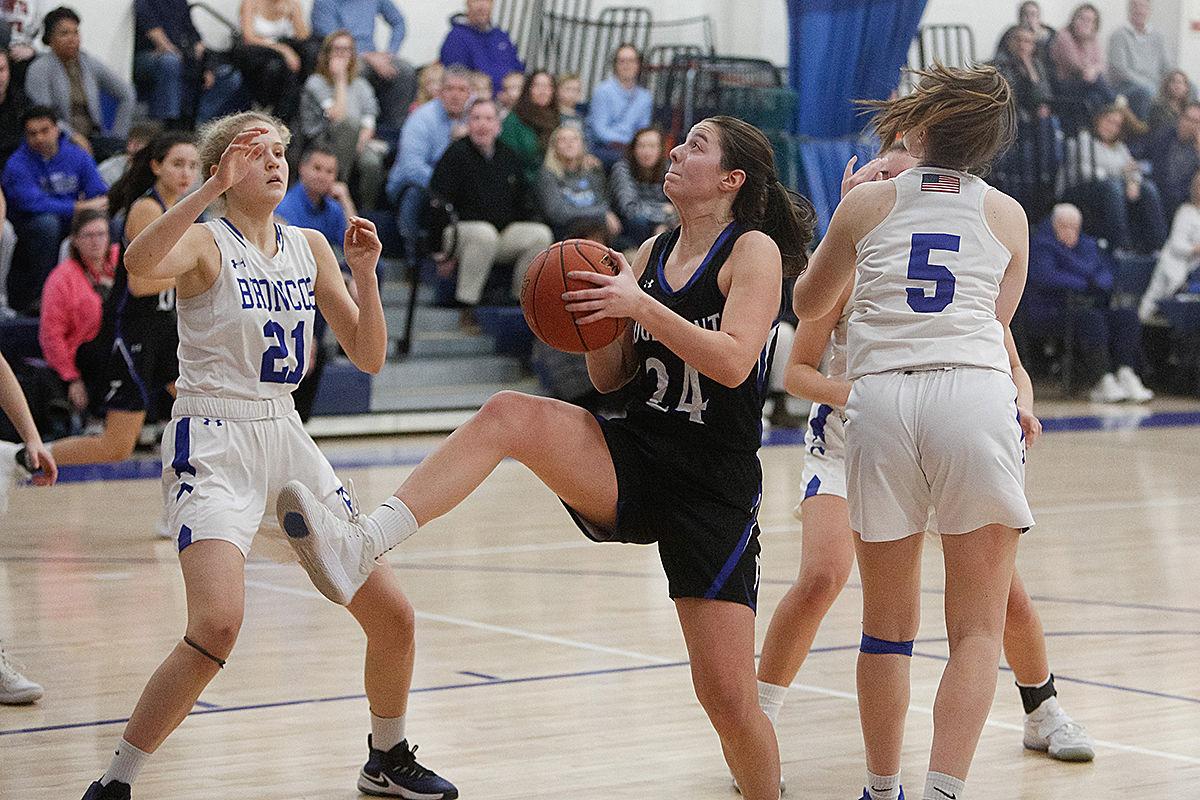 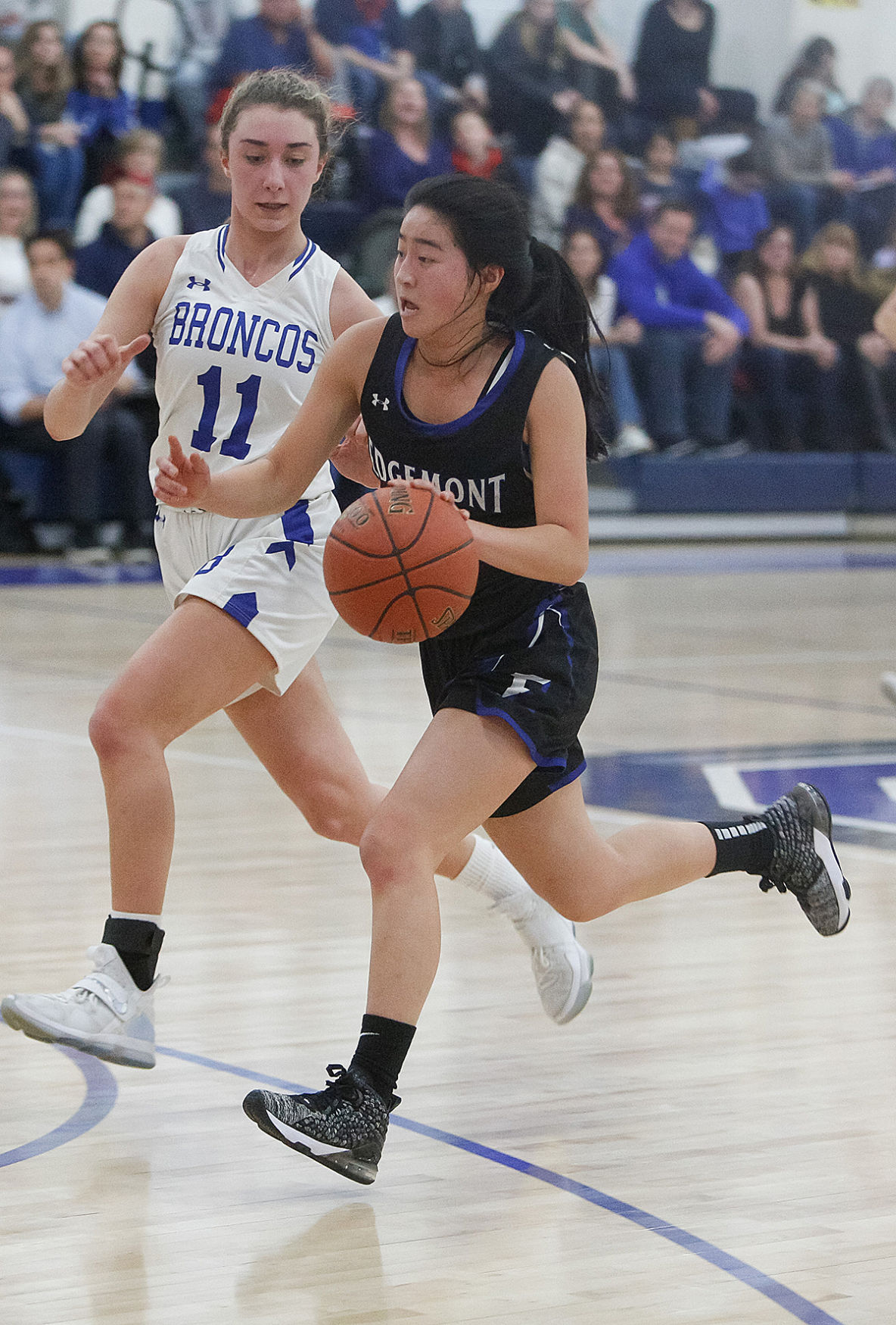 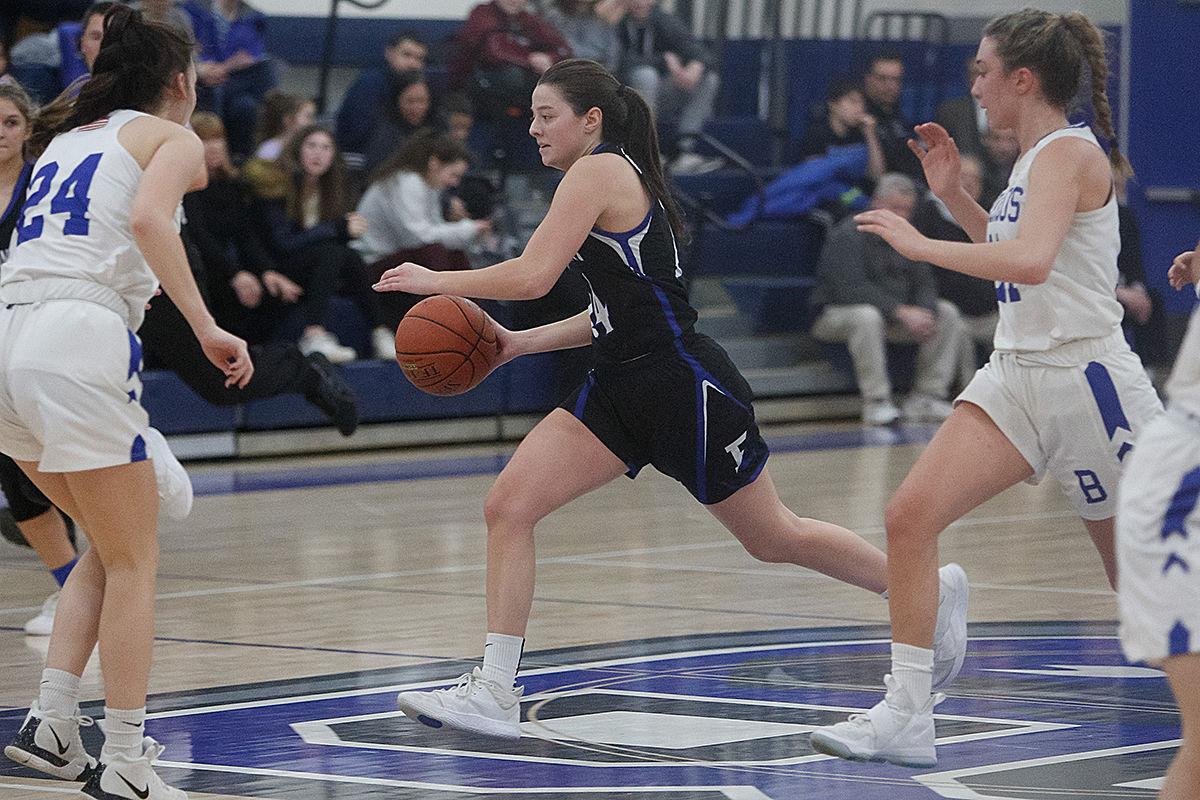 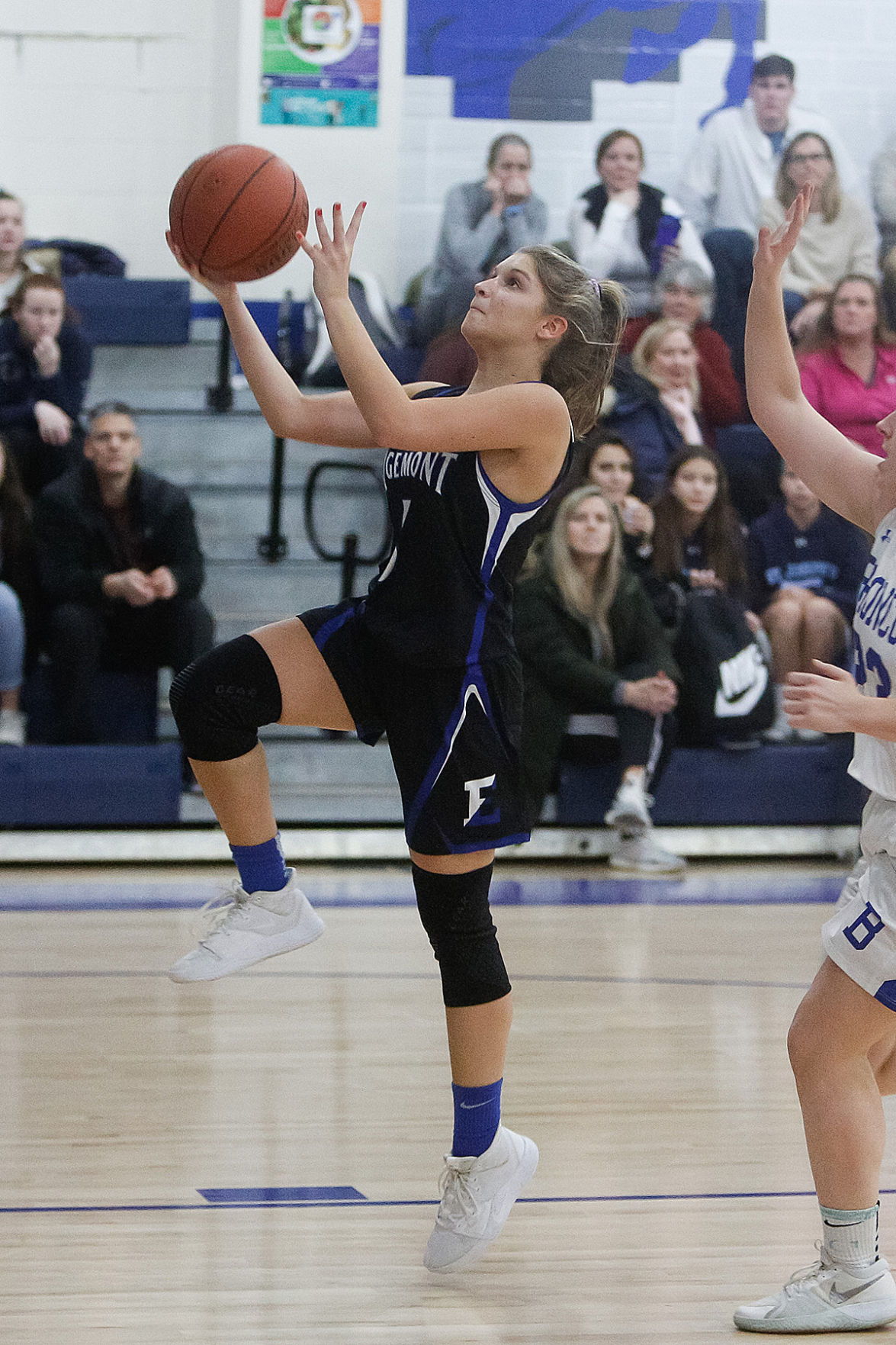 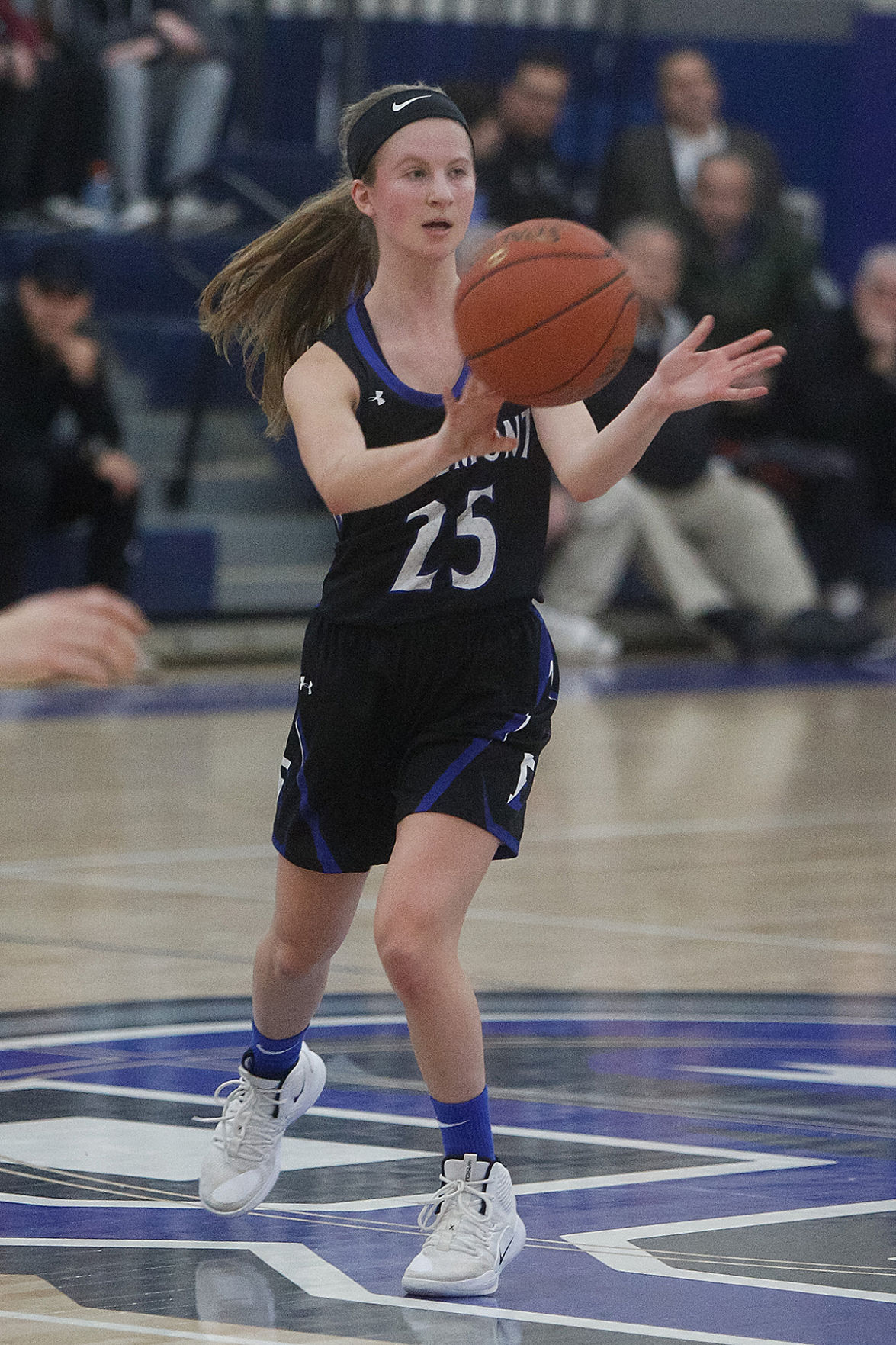 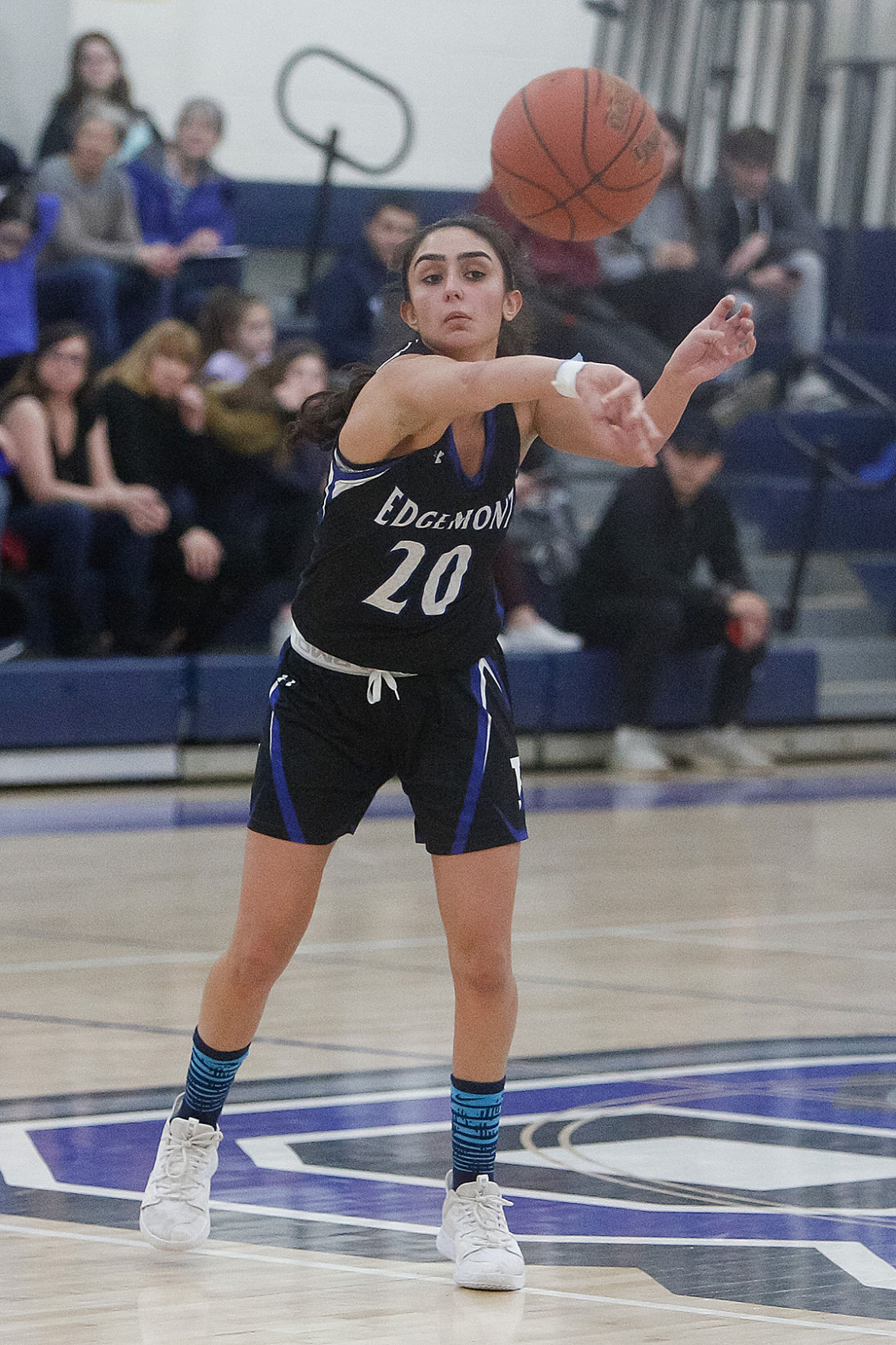 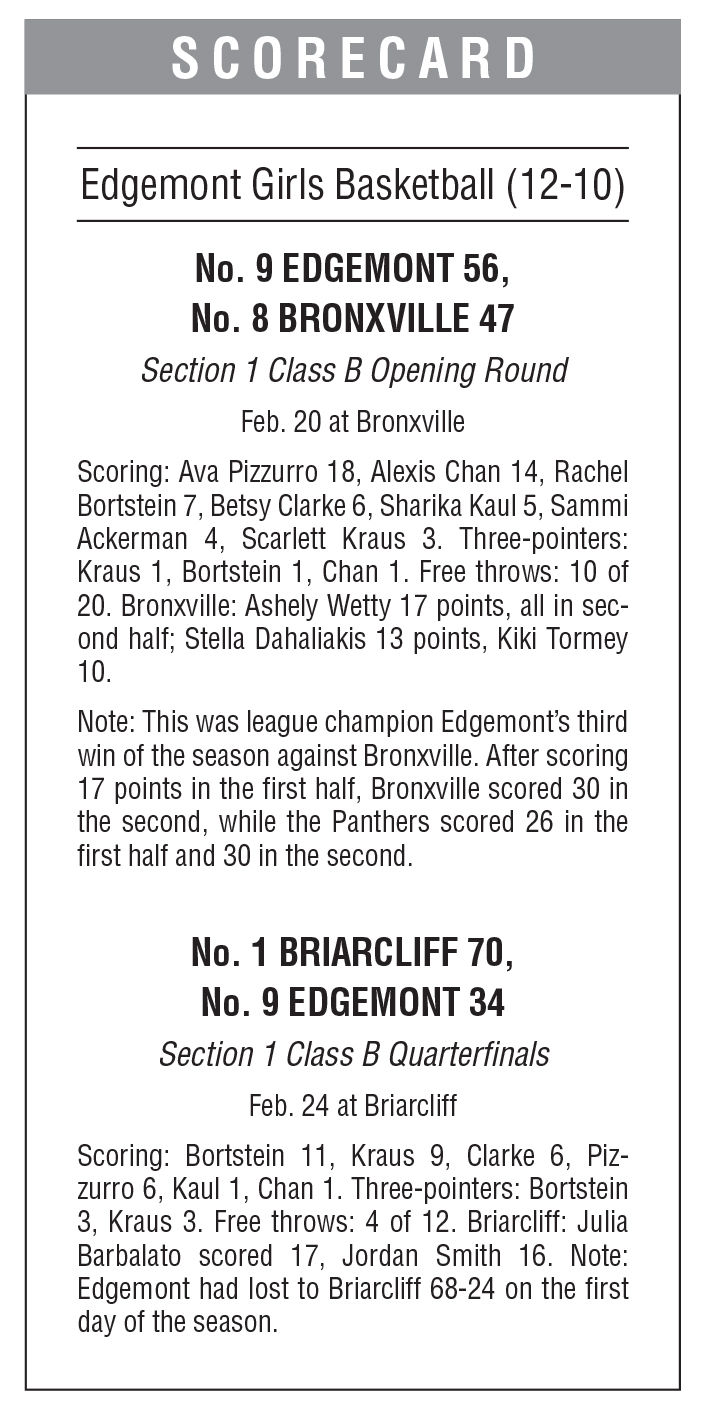 Some teams have a rich history of Westchester County Center appearances and Gold Balls, or even the occasional cameo in the semifinals. The Edgemont girls basketball team has three league titles and two quarterfinals appearances over the last three years.

And the team couldn’t be prouder.

“Everybody has their level of success and the bottom line is one team this year will win its last game in Class B,” coach Larry Giustiniani said. “Everyone else is going to have to value their season based on some level of losing their last game, whether it’s quarterfinal, entrance round, whatever. If you think it’s no big deal to make the quarterfinals, that’s on you, but we think it’s a pretty big deal and we’re happy for these kids. It’s a great team. I’ve enjoyed them. I told them it’s been an honor to coach them.”

While Edgemont would very much like to make the semifinals and play for a Gold Ball, that’s not in the cards for the program just yet. Winning a league title for the first time since 1982 and then winning two more in a row was a great feat the last three seasons. The next step becomes competing in the quarterfinals, something the team has struggled to do in advancing this winter and two winters ago.

In 2018, the team avenged an early-season loss to North Salem, winning 47-43 at home to make the quarters, where Putnam Valley showed little mercy in a 58-19 win.

Last winter the team got off to a brutal start against Pleasantville, falling behind 28-13 before taking a 35-34 lead and then losing 51-42.

This year it was a 70-34 loss to No. 1 Briarcliff in the quarters after beating No. 8 Bronxville for the third time this year 56-47 in the opening round on the road.

Senior Alexis Chan was up on varsity as an eighth-grader and all of this year’s upperclassmen were part of former coach Mike Tracy’s “System” for two seasons in 2015-16 and 2016-17. As a result of doing that and then dropping that, the team has made its presence felt.

Between 2015-17, Edgemont won 20 games over three seasons. In the three seasons since then, the Panthers doubled that total to 40 victories with 16 in 2018 and 12 each the last two years.

This year was the toughest of the stretch after graduating players like Bianca Ferrante and Heather Schneps.

“I think we’ve come really far,” senior Betsy Clarke said. “There was a span for three or four years where it was pretty much the same team and this year is a bit of an adjustment because we lost a lot of people that had been on the team for a while. That’s why I think the beginning of the season was a bit rocky at first. As we grew more comfortable and we became a team it got a lot better.”

Briarcliff came out firing in the quarters and Edgemont never found a groove.

Giustiniani was quick to use timeouts in a win-or-go-home scenario as he hoped to settle his team and get Briarcliff to stall. “It was all about trying to get a 30-second violation on offense because we were doing everything within five seconds,” he said. “We were really, really jacked up. I don’t think we were nervous. I didn’t see nervousness at all. They were so pumped they didn’t really think the game through.”

Edgemont wasn’t shooting well and wasn’t taking advantage of solid rebounding on both sides of the ball.

“We run an offense that’s based on reads,” Giustiniani said. “When you’re being overplayed, like Hastings did to us here in the tournament, we ate it up and scored 50 points. There’s cuts to be made off of that. We weren’t. We were standing still and staring.”

With Clarke playing her best in spite of a back injury and Mehek Nanavaty, who has some size, not an option off the bench, Edgemont struggled.

“We didn’t have the solutions and we didn’t have the amount of players we needed playing well,” Giustiniani said. “Too many players had a bad night. Those timeouts early on kinda settled us, but in the end any run they put back on us we didn’t have an answer for that other than turning the ball over.”

Sophomore Scarlett Kraus did give the Panthers a tremendous spark off the bench, but it wasn’t much of a factor in getting the team settled in. She hit three three-pointers, a good sign of an unshakable player for the next two years.

“She did it again,” Giustiniani said. “She’s an ice-water shooter. She just lets it go. Even when she was missing early in the year her form and her spot showed me that it was a shooter’s approach, not a desperation chuck. Even on her misses early in the year she looked like a shooter. I told her that back then and said to let it go. She was great. Scarlett was just awesome, one of the few bright spots offensively.”

Winning the Bronxville game was the key to Edgemont’s postseason. Having already swept the Broncos — 39-28 and 54-48 — as part of winning the league, the Panthers wanted to prove they deserved a home game, which they didn’t get by one spot.

Clarke, Chan, junior Rachel Bortstein, junior Ava Pizzurro and senior Sharika Kaul stepped on the court and went up 4-0 and 6-5 and sixth man Sammi Ackerman, a junior, was in the game early for her usual spark. Edgemont went up 10-5 and 13-7 and Chan had a breakup at the buzzer to end the first quarter. From there the Panthers built on their lead up to 26-17 at halftime, with some help off the bench from sophomores Juliet Agoglia and Valentina Russo.

In the third quarter, Kraus got involved and helped Edgemont go from a 28-25 lead to 39-25 with an 11-point run in which she contributed a three-pointer. Clarke and Kaul also got on the board and Edgemont led 43-32 with eight minutes left to play.

Kaul and Clarke were in foul trouble early, so the core seven that also included Chan, Pizzurro, Bortstein, Ackerman and Kraus held the fort down without them.

“I think we play together really well as a team, so even when things go wrong we have each other and if we play together we can do what we need to,” Kaul said. “We’ve played together for so long, the core six or seven of us. We know how everyone plays and have an idea of what everyone is going to do and our roles on the team. We’re able to really work well together.”

Chan, Pizzurro, Bortstein and Ackerman are the team’s main scoring threats, though Kraus, Kaul and Clarke also had some big games, so the Panthers rely on the fact that opposing teams can’t pinpoint one or two shooters to shut down.

“Bronxville always calls, ‘Shooter!’ but I feel like halfway through the game they were calling it for every single person on the team,” Kaul said. “We all play, all work hard and all contribute.”

Clarke had three fouls in the first quarter, but got past what the team felt were some bad calls their way throughout the game.

“To have that extra obstacle made it difficult,” she said. “I think we did well getting past that. The outcome shows that.”

Giustiniani enjoys watching the girls do all the little things individually to add up to a collective strength.

“I love that about them and it’s really corny, but it’s a team,” he said. “They really play that way. You don’t pick a player on this team to focus on — if you do, there are other people who will fill that void. We would get the looks we want because of that decision. There’s no default person. It’s not like that.”

Pizzurro scored a quiet 18 points to lead the team, while Chan netted 14.

“Ava and Lex kind of drive us offensively in terms of every aspect of the game,” Giustiniani said. “We have some three specialists, but those two push the ball, they share the point guard role and Ava’s a rebounder and a push forward and she finishes or dishes.

“Lex is all over the court. She has had such great games against Bronxville and I knew if she got in their head it would be frustrating for them. All of them were yelling, ‘She’s carrying.’ They haven’t called that since the ’80s. I knew then they were done.”

In this particular game, however, it was Kaul who was the difference-maker in Giustiniani’s eyes. He credited her for providing “the spirit” in the victory.

“At the beginning of the game she just made a couple of shots, she rebounded, she tipped balls away, she cleared the board, she started breaks, she was composed,” he said. “She was the single most composed player on our team. In any big game you need that person to just go, ‘I’m here.’ It took time for everyone to catch up to that. Shark was just ready from the tip. I was so impressed by her.”

Then there was Clarke who, despite the foul trouble, was making “amazing” passes, and Bortstein, who overcame a slow start after Ackerman went in for her.

“Then you put Rachel back in and she drains a three in the corner,” Giustiniani said. “She got herself together. They’re all like that.”

Ackerman and Kraus were the boosts of energy the team needed throughout the game.

“What doesn’t Sammi so? What does she not do?” Giustiniani said. “If she was 5-foot-10 she’d possibly be an All-Section player. And Scarlett comes off the bench and drains a three. Just great kids.”

The girls took Giustiniani’s advice to, “Do what you’re good at, not what you want to be good at.” Clarke said that made the team “a notable force.”

“I think that has especially resonated with me,” she added. “I might not be the best three-point shooter, but I’m good at steals, rebounding, assists.”

Briarcliff won handily in the first game of the season, 68-24, so Edgemont’s goal was to at least make a better showing no matter what the outcome in the sectionals rematch.

“We know Briarcliff’s record is intimidating, but we have to go in with an open mindset and just try our hardest,” Clarke said. “No matter the outcome we have to be proud of what we’ve done.”